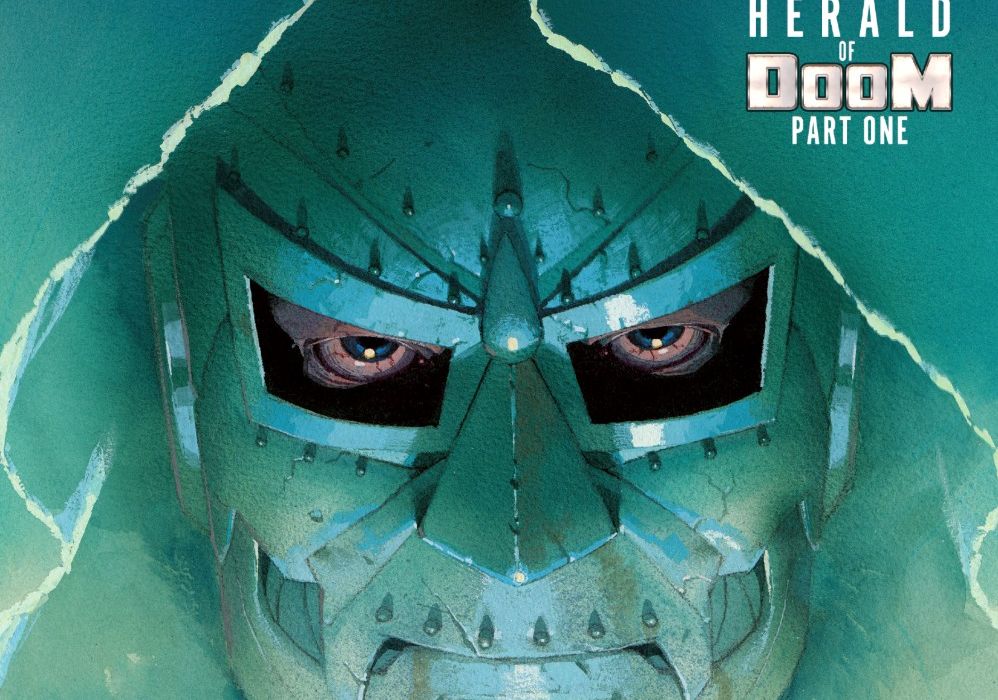 From the Files of the Baxter Building comes Multiversity’s monthly deep dive into the comics and characters that inhabit the world of the First Family of superhero comics: The Fantastic Four!

This month: Two of the FF’s biggest villains come face to face: Doom and Galactus! The Devourer of worlds is back, but it can’t be a coincidence that he’s touched down in Victor’s home of Latveria. And just who is the new Herald of Doom?

Please note: there will be major spoilers for “Fantastic Four” #6 throughout this article. 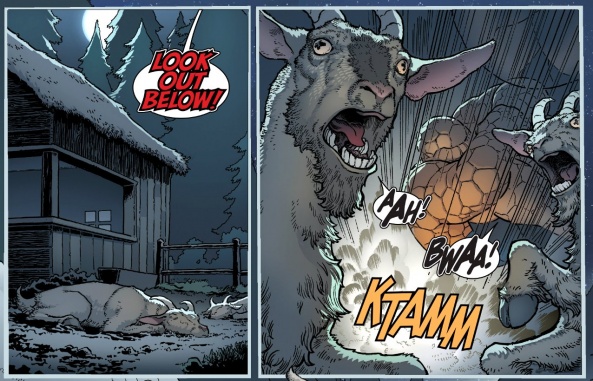 The mighty Galactus, Devourer of Worlds has once again made landfall in New York Cit- wait, no. Ladies and Gentlemen he has not made the scheduled landing destination of the capital of the world but instead has chosen Latveria as the place to be. Never in the history of the Marvel Universe has New York been so insulted. We reached out to the Mayor of NYC, Wilson “I’m not the Kingpin lol” Fisk, who had no comment on this epic cosmic snub of the Big Apple.

Of course, it can’t be that the massive purple planet eater chooses to touch down anywhere other than the Fantastic Four’s doorstep, oh no, he wouldn’t do that. Instead, it’s all down to the manipulations on Latveria’s newly reappointed ruler, Doctor Victor “I’m evil again lol” von Doom! His abuse of the Power Cosmic to create a new Herald for himself has drawn the attention of Galactus, who begins plans to eat the planet before realizing that his needs come from a little further south than his stomach…

Yep, Galactus may eat planets for a living, but the dude has desires. In this case, his eyes are only for Victorious, the new Herald of Doom. We first saw her in the epilogue to the first issue of this current “Fantastic Four” run, but then she was only known as Zora. Zora was a Latverian loyalist who coaxed a mopey Doom out of self-imposed exile and encouraged him to once again pick up the duties of “maniacal despot” that the world has been lacking ever since he went all Tony Stark on us (a dark time in Victor’s life that he’d probably rather forget, consigning the “Infamous Iron Man” to the annals of only the geekiest of pub trivia). 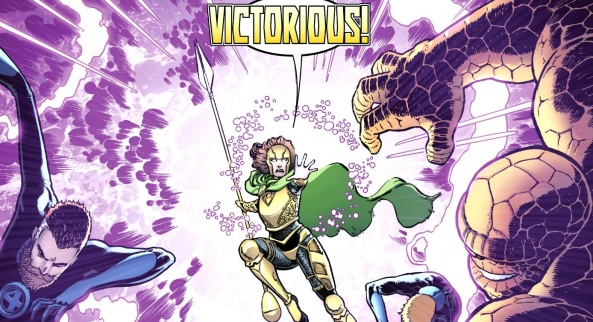 As a reward for her motivational speaking, Doom bought her a puppy and made a donation in her name to the World Wildlife Fund. What a sweet dude. That’s it for this month! In the next issue- ok, you got me. Of course Doom didn’t do anything nice and selfless for Zora. Instead, he exposed her to the greatest power in the galaxy – the Power Cosmic – transforming her into his new Herald of Doom and ensuring her pivotal role in a plot to lure Galactus back to Earth for reasons that have yet to make themselves known. 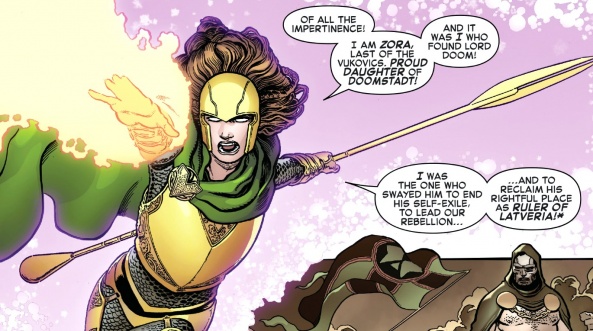 The Fantastic Four – no doubt furious that they have to travel anywhere further than their own rooftop to confront Galactus – arrive in Latveria just in time to berate Doom for his spectacular failures as a human being, before he corrects them by telling them it’s all part of his master plan! 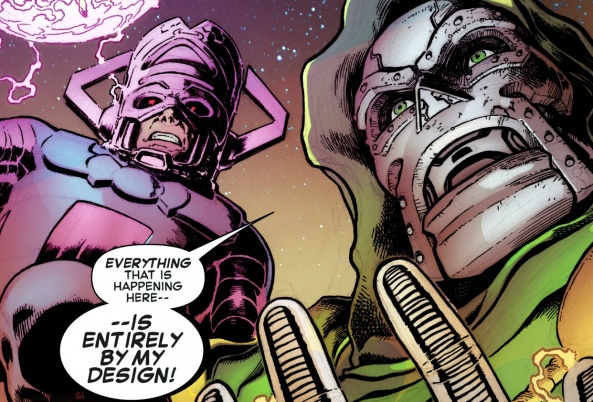 When Reed Richards confronts Doom for the first time in four years (these versions of the characters have not seen each other since the end of “Secret Wars”), you almost feel sorry for Victor. The self-titled Mr. Fantastic turns up on your doorstep, talking smack about your arrogant mistakes and how your miscalculations have threatened us all? I don’t care if you do have a master plan or not, you’re sure as heck going to pretend you do! 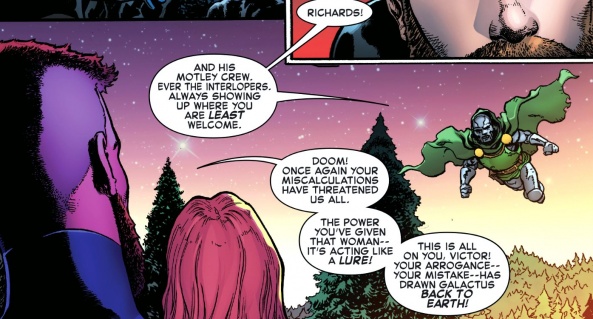 Still, you can’t help but see Reed’s point. A hungry Galactus is one thing, but a horny one is downright dangerous. Doom’s manipulation of the Power Cosmic has crafted a being so powerful that she’s acting as a beacon in the night sky for the Devourer of Worlds, and seeing as your dating options have to fairly limited when you’re a 100ft purple spaceman, now that he’s found someone perfect for him, he’s not letting go so easily. Look out for the next issue, in which Galactus climbs the Latverian Empire State Building clutching Victorious in his meaty paw, surrounded by the Latverian air force taking pop shots at him while he flails angrily. 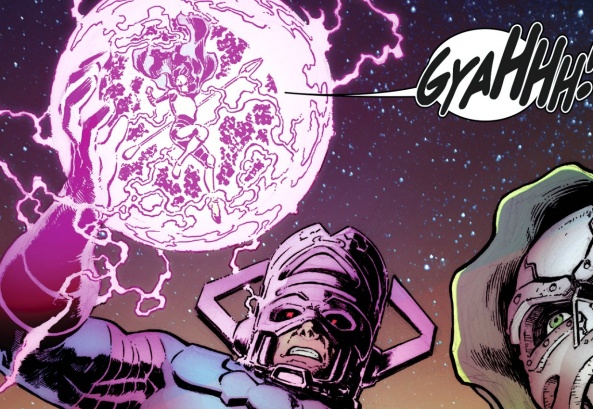 How exactly does Doctor Doom know how to siphon off the Power Cosmic like that anyway? Well, it turns out he’s done it before. Not only does he have the experience, but he has the hardware too. In this issue, he grabs the same machine that he’s had lying around since 1966 and uses it to beef up Zora’s skillset with the mighty Power Cosmic.

We first saw the Power Cosmic Stealing Thingy (Not Actual Title) back in “Fantastic Four” #57, which even had a similar cover to this month’s issue #6: 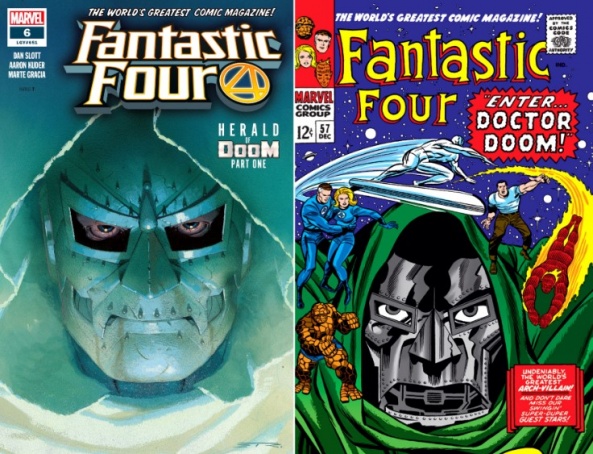 While Marvel’s First Family were off fighting against Sandman: 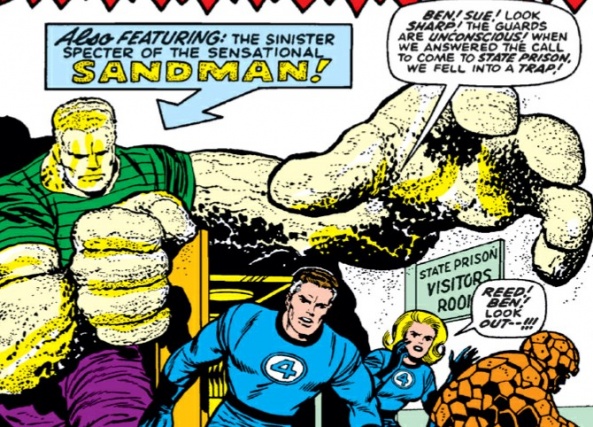 Doom was inviting Silver Surfer round to his place for the evil version of pizza and Nintendo.

When he got there, Doom admitted that he was curious about Galactus’s Herald. After all, he’d only shown up a few issues prior in the seminal ‘Coming of Galactus’ storyline, and neither Doom nor the readers had much of an idea about just how the Silver Surfer worked. Not one to be modest, Surfer is only too happy to divulge all of his secrets, even demonstrating his powers by creating a weapon so powerful that it could destroy the universe – plus it’s as light as a feather! Yours today for the low, low price of $19.99!

But wait, there’s more! It turns out that accepting an invitation to a complete strangers house and showing off your extremely enviably cosmic power isn’t the smartest move that anyone has ever made, and while Surfer is distracted by a fancy science window – 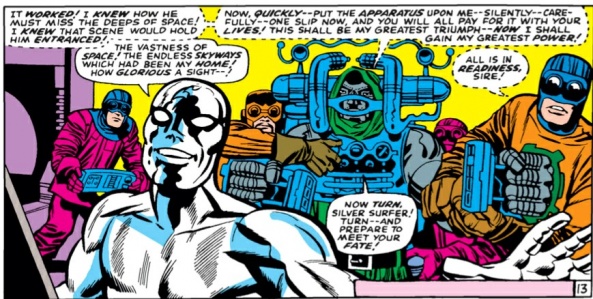 – Doom strikes, strapping himself into a contraption that seems to oddly accentuate the nose area, and stealing the Power Cosmic for his own! 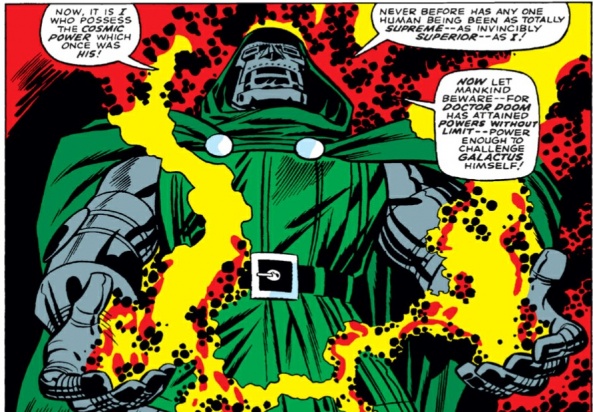 It’s ok though because the Fantastic Four are on the case!

No, wait, they’re watching TV and agonizing over how to defeat…the Sandman…Look, maybe if we give them a month they’ll have something figured out by then.

Until next time, Excelsior! 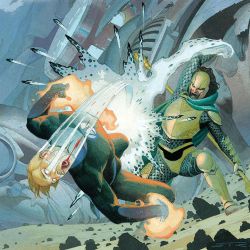 From the Files of the Baxter Building #7: Dr. Doom’s Wardrobe Malfunction

From the Files of the Baxter Building comes Multiversity’s monthly deep dive into the comics and characters that inhabit the world of the First Family of superhero comics: The Fantastic Four!This month: Galactus gets turned into a battery, Reed Richards gets turned into a frosty bedsheet, and Doctor Doom lets it all hang out. Warning, […] 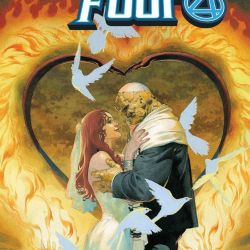 From the Files of the Baxter Building #5: Something Borrowed, Something Blue

From the Files of the Baxter Building comes Multiversity’s monthly deep dive into the comics and characters that inhabit the world of the First Family of superhero comics: The Fantastic Four!This month: The biggest wedding to hit the Marvel Universe since…well, since the last one! Plus, we take a look back through the strange relationship […] 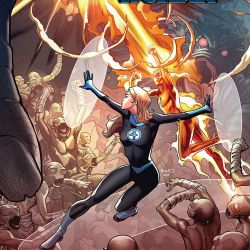 From the Files of the Baxter Building #4: Something Old, Something New

From the Files of the Baxter Building comes Multiversity’s monthly deep dive into the comics and characters that inhabit the world of the First Family of superhero comics: The Fantastic Four!This month: The FF return to New York, but wait…who’s living in the Baxter Building? Plus, Mole Man pulls double duty, “Marvel Two-in-One” draws to […]