It’s been a wee bit of a weight, but we are back with our “Mind the Gap” annotations column, Bridging the Gap, in which I attempt to point out key elements of Jim McCann, Rodin Esquejo and Sonia Oback’s whodunit mystery comic.

As a note, this article features incredibly heavy spoilers for the issue, so if you haven’t read it yet I’d recommend averting your eyes for the time being. If you have read it, however, take a look beyond.

Oh, So That’s The Cast

In the last installment of this column, I named 13 people as possible candidates for Elle’s attacker. Or, in other words, I named every single person who was named in the comic and then added reasons as to why they could’ve done it.

It looks like now there is some clarification towards the subject. 10 suspects, not including the Hoodie character, who is assumedly a member of our cast. They look like this: So there you go. Now we know who to watch. That is, unless the creative team pulls a fast one on us and introduce … I don’t know, some kind of weird plainly named apparition who lives in an alternate dimension and travels to our world to murder girls and fire walk. We’ll see.

Now onto a few resolved things:

In the last issue, someone burst into Gellar’s apartment while she did some off-campus research, causing her to become incredibly startled (after spending an issues worth of time being startled).

Who is that person? Her cop wife, Annie, part of the “Cagney and Gaycey” duo (their words, not mine — and, for those who don’t know, is a reference to Cagney and Lacey) they make up with their doctor/cop relationship. At any rate, this scene involves Gellar investigating heavily into the weird case of Elle’s coma, and getting light help/words of advice from her wife. I know we’re supposed to suspect everyone, but unless Gina’s got some serious split personality issues going on, I somehow doubt she’s the attacker.

Cliffhanger #2: Back In The Mind

At the end of the previous issue, Elle accidentally went into the body of a comatose spanish man named Esteban after he had “moved on.” This issue sees the continuation of that, with her inside of his body speaking English until the body dies without her being able to tell anyone about the whole possession aspect. Elle reveals that during her possession, she saw his entire life flash before her eyes, essentially absorbing his personality. Her trusty guide Bobby has no idea what she’s talking about, which would make sense if he is (as he claims) a figment of her imagination and lines up with his inability to know things she doesn’t know. At the same time, he mentions that this has never happened before, so who knows what he really is.

What does this mean? Well, the obvious answer is that this right here is how the books mystery will be solved: Elle will possess other bodies and control them until they run out, for whatever reason, using that time to try and solve the mystery of her attack.

The question, however, is why did she only have a few minutes? Can she extend the time she possesses a body for, or is she limited to five minute bursts of crime solving?

Last issue, Dr. Harold Crenshaw crashed his car after almost hitting a weird plastic deer, followed by Hoodie stealing a briefcase and walking off into the night. This one we have very little resolution on, but we know this: Crenshaw is seen being brought into the hospital, a brace on his neck but assumedly alive.

More on why I say “assumedly” later.

Parallels, And What They Mean

As I noted, it is entirely possible that Bobby Crenshaw is nothing but a figment of Elle’s imagination. Heck, there were enough references to this all being “in Elle’s head” last issue that I got to make a Dallas joke at the end of the column.

And yet, a certain trope exists: characters stuck in dream-like realities often see characters from their “dreams” (however you want to define that) actually being manifestations of real people. See: The Wizard of Oz (“But it wasn’t a dream. It was a place. And you – and you – and you – and you were there.”), that one episode of Futurama where Fry “dies” or any number of possible examples.

What I’m getting at is, this sequence: 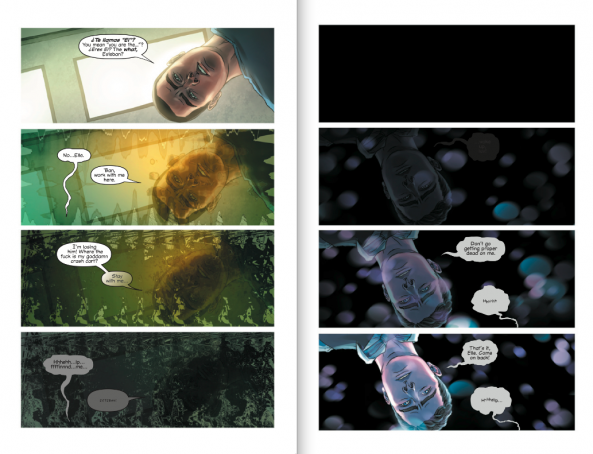 Is possibly maybe not just for aesthetic purposes. I would expect to see that male nurse (later identified as Frankie, via Gina’s phone) again.

Last issue, we met Miles Gilbert, Harold Crenshaw’s assistant who knows Elle, although we don’t know how or to what aspect. We know that Miles has some kind of fear of Elle, but not much beyond that. However, as we see in this issue, Miles is attempting to extract the Elle Peterssen file from Crenshaw’s computer before getting a text from a blocked number, who informs Miles of a bomb in the building. Miles runs, the building blows and it is unknown if Miles made it out of the explosion alive (but I assume he does).

Two things to note about the scene: The folder Miles is trying to copy is “E. Peterssen/J.P.” The question now is, what does the JP stand for? And could this be in relation to Jairus, which user briemoo pointed out in the last edition of Bridging the Gap’s comments? And is it safe to assume that Miles needs this information because of what happened to Crenshaw?

As Jim McCann points out in the backmatter, we don’t see who is texting Miles in this scene. All we see are gloved hands (more on this later). It could be Hoodie (who is outside the building and on the cover), it could be a “the puppet master”, and it could be a new character (dammit, McCann!!!). That’s important to keep in mind when attempting to figure out Miles’ motivation.

Everyone seems to have a white iPhone, which would make you think it’s an iPhone 4S, and yet there’s no front camera. Oops!

Still, I wonder if Siri could solve the mystery? Somebody ask “Siri, who attacked Elle Peterssen on the subway platform?” and let us know what she says.

Elle’s father Edward Sr is described as protective on the opening page and is apparently the only person in her family to give a damn about what happened to Elle (as is reflected by her mother’s indifference in this issue coupled with a “life goes on” attitude, and her brother not even bothering to show up for a panel!)

The important element detail of this scene, however, is the reveal of a photograph (seen above) featuring a young Edward, as well as (what we can assume is) a young Min and a young Dr. Hammond in the background with a baby inside an infant incubator (basically an artificial womb to help the baby develop as a result of to birthing complications). Edward asks outloud, “What have I done…?”, which assumedly links to whatever was in Hammonds file that Gina was writing down (“propof”, which we are assuming relates to “propofol”). Generally speaking, it appears like some kind of weird testing was done on young Elle, which has resulted in whatever is happening in her head now — and which seems to imply that Edward knows exactly what happened to her.

I wouldn’t call him the attacker yet, but he’s definitely our lead.

Also, apparently he loves fishing/sailing, as is evident by the steering wheel behind him, ship in a bottle on the desk and a fish mounted above the fireplace. The one curious room ornament? A stone hanging in a net. Apparently it’s a real thing people do, but I can’t find out the significance of it. Feel free to chime in in the comments if you know what’s up with this.

Hanging At The Vineyard Theatre

Alright, so in the last issue we had reference to the Vineyard, and nowe we know that it is indeed a reference to the actual Vineyard Theatre. Our sleuthing paid off! And hey, wouldn’t you know it, the Vineyard had a production of Now. Here. This. going on, for those curious about the poster.

But that’s not the important elements of this scene. Far from it. The important part is that Dane, Elle’s boyfriend, is seen in a hood while wearing gloves dealing with someone threatening him on the phone. Obviously this is a big deal; Dane is angry, Dane is menacing and he has the most damaging evidence against him. For all intents and purposes, he perfectly fits the bill of Hoodie.

I’ll note this, however: Most mysteries of this nature usually blame the “angry significant other” of some or fashion, and it’s almost always a red herring. It is very rarely that easy. Dane may be wearing gloves and a hoodie, and he may be suspicious as all hell, but I wouldn’t put any money on him being the attacker.

Still, I suppose anything is possible. Heck, this could even be Edward Sr. calling him on the phone drunk, sad and angry about whatever the heck is going on.

There’s also a second reference to Hunter, who we never saw in the first issue but did hear reference to. Chalk that up in your notes.

The Man Of Our Dreams

It’s a bit early to really try and extrapolate any major meaning of this outside of the office, but I suppose that’s worth stating: whatever is happening with Elle is not an isolated incident. It’s very clearly part of a larger conspiracy.

Oh, and what’s with that guy who “won’t stop flipping [Elle] off”? Add that into your notes as a possible recurring gag, let alone anything substantial.

It’s been a long wait, but as usual the “Mind the Gap” team has delivered an issue you can really sink your teeth into. There are a lot of ideas up in the air right now, and more than ever, mulling over the events of the issue is enough to make your head hurt. At […]

“Mind the Gap” is back after a two-month break, and kicking off a whole new arc. I’d be lying if I said I wasn’t a little rusty in terms of annotating skills, but then, this delightfully mysterious series boggles my mind at the best of times. Let’s see what we can sort out.ETA 12/28/13: I […]

This is an incredibly emotional issue of “Mind the Gap”; we’re getting a real grasp of the consequences of Jairus for everybody around Elle, and along the way, getting a firmer grasp on the history of the project. It wouldn’t be “Mind the Gap” if one or two fresh mysteries didn’t pop up along the […]