As a note: unlike some other analyses, this one will not skimp on spoilers, though it will still attempt to be new reader friendly by way of bringing up past information.

Furthermore, for sake of clarity: “Hack/Slash” is a mature comic book series. As such, many images may not be suitable for younger audiences, and quotations and/or panels may include liberal curses and mature content such as profanity, violence, or sexual imagery.

In some stories, such as several of those in the “Trailers” collections, there are stories that could not possibly fit into the current timespan of “Hack/Slash” as readers know it. These instances are admittedly rare, and many times clearly played purely for laughs, but they are still notable. “Hack/Slash: Trailers” #1 featured ‘Orbituary.’ Being a “trailer” of a potential story to come that went into a parody of how certain horror franchises send their characters to space once they run out of ideas (a famous one being “Jason X” in 2001 for the Friday the 13th franchise), it is not explored in depth. “Hack/Slash: Trailers” #2 had ‘Hack/Slash/Repeat,’ which dealt with not only time travel, but also alternate universes’ versions of Cassie Hack as they fought a version of the infamous Jack the Ripper (who in “Hack/Slash” proper is heavily implied to have been a slasher himself). Not to be confused with “Hack/Slash” #19 of the Image Comics run (despite having the same title), which dealt with a seemingly infinitely resurrecting cursed undead being.

Divorced from the extant, though rarely explored, idea of a multiverse (which mostly allows for some of the weirder crossovers that wouldn’t fit within the bounds of the relatively grounded “Hack/Slash” world of Earthspace 777), these stories are on a completely different level, reaching more into the idea of “possible futures” from other franchises such as DC Comics. ‘System Ready’ (discussed in one of the sections below) fits best into this type of tale, as a hypothetical future version of Cassie and Vlad that is done without any bearing on the canonical storylines.

Given the different formatting of this month’s issue, it seems prudent to split it into analyzing the different sections in order.

First, about the organization: the one-shot is split into a collection of different sections. One of the sections, “S#!+ my Vlad says” (compiled by Jeff Bohn of the “Hack/Slash Inc.” fan blog, who is actually featured in the first story as an announcer) is just a collection of humorous quotations from the loveable Vlad himself taken out of context, and so isn’t really something that can be analyzed thoroughly. Another is a collection of pin-up images from various artist throughout the run, some of which were collected in other volumes, and a few that were only seen on their personal artist pages on DeviantART or the like, and so probably isn’t the type of thing that can be analyzed thoroughly either in the context of the story.

Furthermore, the information regarding the timeline added into this special edition is already included for Butcher’s Block in the second annotated edition on this site, and so does not require repetition. 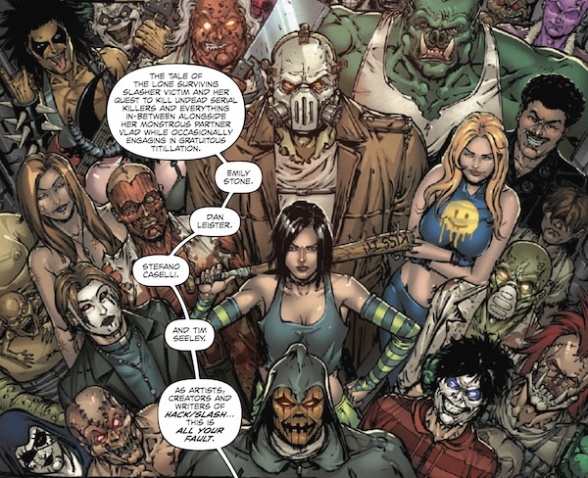 Closest thing we're going to get to a 'cast photo' for the time being.

Before we get into the actual meat of the primary story, it seems like a good idea to identify the people in the “cast image” on the first page. With just the names, it seems like a good idea to identify them for those who may have forgotten. They will be identified by row, from the back row to the front. Each of them being on a curve centered on a point just below the center of the panel, the arc goes clockwise (from the left) each time.

If you would like any further explanation for any of these characters, who they are, et cetera, feel free to ask, as mentioned at the bottom of this annotation page. The main reason why they aren’t being explored in depth is that we’d be here all day, and we’ve got an entire collection this month.

Your Darlings Kill You 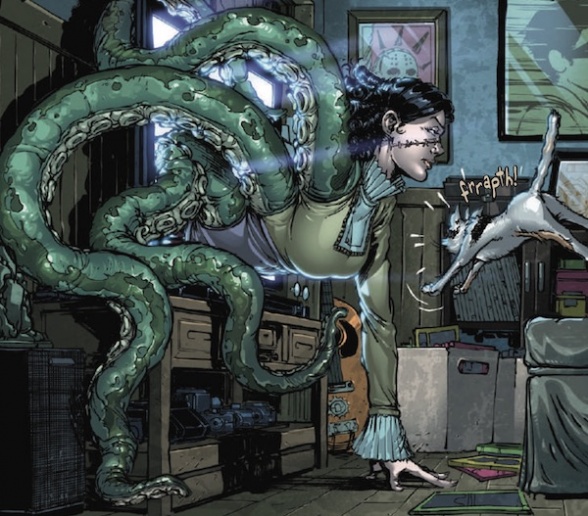 Who better to throw in as the villain of the week for a story based around metafiction than Mary Shelley Lovecraft? This being, self-proclaimed as a metaphysical manifestation of fiction itself, makes it her business to be completely aware of all of the different kinds of stories she could be a part of, with references ranging from famous writers such as William Shakespeare to more popular culture-based figures to the tune of Buffy Summers and Hellboy (both of whom were used as comparisons to Cassie herself in their first encounter). First brought up in the ‘Entry Wound’ one-shot story, then finally meeting Cassie Hack herself in person for the ‘Something’s Fishy’ issue of the Image Comics “Hack/Slash” run before her latest appearance in the “Hack/Slash/Eva: Monster’s Ball” crossover, this entity’s goal is the override of reality with fiction to the point of her having full reign over anything she could possibly want to do. Given that she is a thoughtform more than an actual person, she seems impossible to truly kill, instead only being temporarily banished each time she is faced. 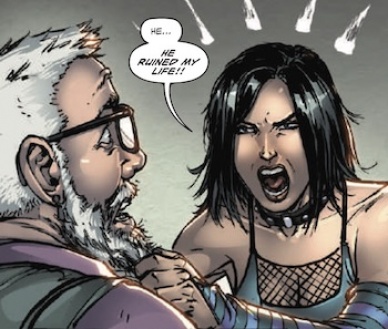 The Last Action Hero? Is that you?

With the “deal” made between Lovecraft and Tim Seeley’s fictionalized version of himself, Cassie Hack herself emerges into the “real” world. She is decidedly unhappy about learning that her trials and tribulations were just a fun story for others. The whole thing comes across not unlike the confrontation between Jack Slater and the actor who portrayed him, Arnold Schwarzenegger, in The Last Action Hero, down to the same “[they] ruined my life!” line. Much like many other stories in “Hack/Slash,” this one has both a humor to the sheer ridiculousness of the situation (especially with Seeley’s extremely sarcastic approach to the continued narrative at times) and at least some sense of tension over what is going to happen. With Hack bringing up the various troubles she underwent (including even Chippy the Slasher Slayer of all people), Seeley acknowledges the terrible lengths to which a writer can drive his character to create a good story. 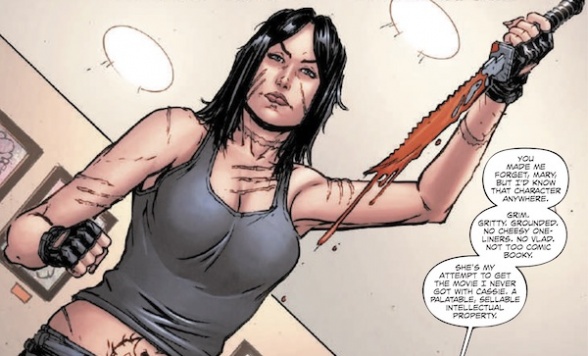 Cassie just isn't the same without a foil or humor.

The revelation of Seeley’s self-admittedly hackneyed plan to kill her off by making her “real” (one he says he probably stole from others on some level) works its way into why simplifying her portrayal, such as in “Cassidy Black,” removes what makes her story special for people. In Seeley’s own words, “readers will see right through” a version of Cassie without her humanity, resulting in her not getting more than the bare minimum of publishing. Without things like “cheesy one-liners” or her best friend Vlad, the protagonist of the “Hack/Slash” story doesn’t have the organic development provided by the “happy accidents and crazy abandon” coupled with “misdirected passion” that make up the heart of her character, whether emotionally or in a more general narrative sense. 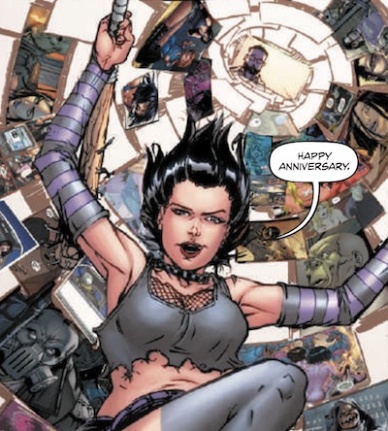 And that's a wrap on her part.

Once Lovecraft had been dealt with through another deal seemingly in her favor, all that was left was for Cassie to return to her own story. She acknowledges the good and the bad, while her writer has his own way of commiserating with her. Saying that he hasn’t done anything else on that level isn’t something that we will really be addressing affirmatively or negatively, but whatever works for him.

Now then, what will become of Mary Shelley Lovecraft, to whom Seeley had promised a leading role in exchange for her resurrecting Cassie? 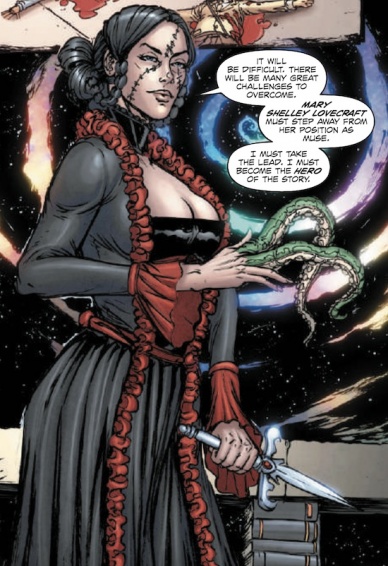 And the adventures continue?

This segment, one of the two I am credited for (aside from the timeline), was one I went through with co-author Jeff Bohn extensively for a few weeks to months, utilizing numerous spreadsheets and going through every issue of the series with a fine-toothed comb, at times panel by panel. There were actually a few other categories, including the types of beings, effectiveness rate of Hack/Slash, Inc. (based on how often they succeeded versus failed to achieve their set objective), and a group of how many times specific events occurred within the run.

The list of crossover characters can be the trickiest, given so many of them are never actually named on panel, within the book, but Seeley helped provide the names for many of them. Still, some may be left out, though it seems that at least the vast majority of them are there. 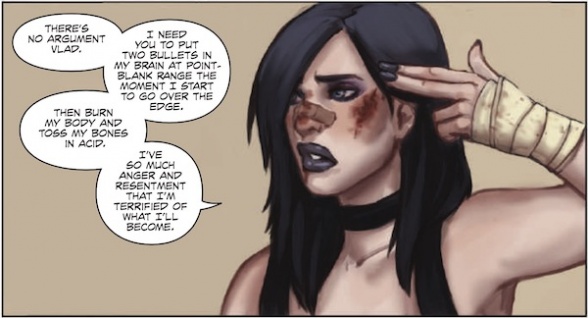 That's your answer to every 'she who fights monsters' situation, Cassie.

“You talk about the abyss, Vlad. Fuck, man… I started falling years ago.”

As has been discussed before, Cassie is in no way a stable person. She has at least two psychological disorders and likely more beyond those, and is well aware of how deep into the depths she drives. Even before this story, she had at least one case, after the events of “Comic Book Carnage,” when she asked Vlad to kill her if she went irreversibly over the edge.

However, she continued to justify her actions afterwards in such events as the summary execution of multiple slasher-infected children (as mentioned within this very story, which likely takes place a short time after the events of that event in “Hack/Slash: The Series” #11). Rather than just be a random repetition of previous acts, this short story showcases how her life is pretty cyclical at times, with her delving into the depths of madness as she tries to fight it.

Rarely has anyone ever accused Cassandra Hack of being capable of learning her lessons, at least when it comes to interpersonal relations.

This story is a simple, fun one-off about a possible future version of Cassie Hack and Vlad. Not unlike how George A. Romero’s classic Night of the Living Dead equated the undead with consumerism, this one proffers the concept of increasingly sedentary lifestyles brought on by virtual reality’s widespread adoption leading to the creation of a more high-technology variation on the slasher.

Several elements of the future do come up. There are the glowing blue lines along the side of Cassie’s half-shaved head, an electromagnetic pulse generator within the latest edition of Cassie’s trademark bat, a cybernetic right arm and holographic facial disguise for Vlad, and a new secondary partner in the form of the heard-but-not-seen artificial intelligence Alexis.

None of these ideas are likely to lead into a new story arc, but the idea is still a fun exercise in a possible way forward.

Want to know more about the pieces of the lore and particular material discussed, or other elements about the epic as a whole? Feel free to ask away in the comments below.

Welcome to Butcher’s Block, our “Hack/Slash” annotation. Today we’ll be going over the third and fourth installments of “The Crow: Hack/Slash.”As a note: unlike some other analyses, this one will not skimp on spoilers, though it will still attempt to be new reader friendly by way of bringing up past information.Furthermore, for sake of clarity: […]

Welcome to Butcher’s Block, our “Hack/Slash” annotation. Today we’ll be going over the second installment of “The Crow: Hack/Slash.”As a note: unlike some other analyses, this one will not skimp on spoilers, though it will still attempt to be new reader friendly by way of bringing up past information.Furthermore, for sake of clarity: “Hack/Slash” is […]

Welcome to Butcher’s Block, our “Hack/Slash” annotation. Due to some scheduling of releases, we will be addressing the first issue of the crossover that began in the last week of June, but not the second, which will be released next Wednesday (July 31, 2019).As a note: unlike some other analyses, this one will not skimp […]