We kick off our real coverage of Marvel’s summer event, “Original Sin” this week with an issue full of intrigue, murder, and disappointing promotional items. Spoilers ahead! 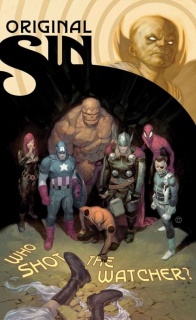 WHO SHOT THE WATCHER?

The Watcher, the mysterious space-god who’s been watching us from the moon for as long as we can remember… is dead. Thus begins the greatest murder mystery in Marvel Comics history.

As Nick Fury leads the heroes of the Marvel Universe in an investigation, other forces are marshaling as well and other questions are arising. Why is Black Panther gathering a secret team of his own, including Emma Frost, the Punisher and Dr. Strange? Who is the Unseen? What was the Original Sin? What was stolen from the Watcher’s lair? And most importantly, who now holds the Marvel Universe’s darkest secrets in the palm of their hand?

Now before we start off talking about the comic itself, I have one major beef with Marvel at the moment. Or more accurately, EYE have a major issue beef. As part of the promotion for the event, Marvel has been supplying stores with Uatu’s eyeballs, gouged out from his skull just like they are in the comic, as demonstrated in this photo by the latest murderer on Hannibal, Tom Brevoort. 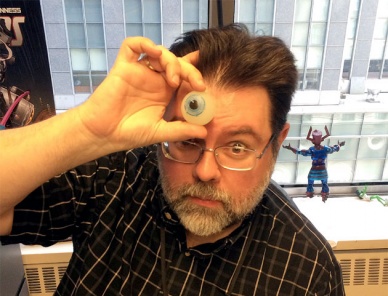 This promotion is, in a word, pretty fucked up. Still, Uatu’s eye would hardly be the only body part I have hidden in my house so I agreed to take one from the man behind the comic counter. As I held the eyeball in my hand I was immediately disgusted which, honestly, should be anyone’s reaction to being handed a gouged out eye.  It’s a little slippery and made of rubber. LIke the type of balls you’d throw at the kid in your elementary school who smelled like trash so he’d leave you alone during lunch. Or play jacks with. I was immediately dumbfounded. I had assumed that the eyeballs were going to be plastic and hollow on the inside. Thanks to Marvel, my weekend beer pong plans have been ruined. If Marvel really cared about its readers they wouldn’t give away items that I have to awkwardly explain to my roommate, but items that I would have to awkwardly explain to my roommate before we both said “whatevs” and used it to get hammered.

Now that we’ve finished screaming at our balls, let’s discuss the issue at hand: “Original Sin” #1. The comic starts off with The Watcher standing on the moon and being narrated at. He watches the events of the Marvel Universe, he’s seen everything, blah blah blah. If you didn’t read the #0 issue than here it is in a couple pages. And, I must say, a couple of really great pages. Mike Deodato can be really hit or miss sometimes (“SHIELD”? Amazing! His work on “New Avengers”? Alright.), but The Watcher’s lair in “Original Sin” is something to behold. There’s machinery everywhere that, set against the canyons and cliffs of the moons, makes The Watcher seem inhuman with a lowercase “i”. This isn’t just The Comedian or Sue Dibny getting killed, Aaron and Deodato are working on a much grander scale.

The Watcher won’t be working on a grand scale anytime soon though, as someone blows up him and his house on page 5.

From there we cut to a steakhouse (why yes, Jason Aaron did write this comic) where Black Widow, Wolverine, Captain America, and Nick Fury Sr. are all enjoying “Meat Night” which somehow isn’t a cult thing. Also, Nick Fury has apparently been just kind of hanging around eating steaks with people. That’s where he’s been. Huh. Anyway, they all talk about the best steak they’ve ever had, the best two stories coming from Nick Fury who monologues about a cow he and his squad butchered in 1944 and Natasha, in an effort to remind everyone how Russian she is, talks about how she straight up hunts bears in the wild and eats them. I haven’t been keeping up with the new solo “Black Widow” title but if that’s the synopsis for the series to date then sign me up. Unfortunately, Meat Night is cut short when Cap gets a call that The Watcher’s been murdered. As Cap, Nat, and Logan prepare to leave, Steve turns to Fury and offers for him to tag along. He claims that this is the type of seedy operation that Nick would be perfect for but really it’s probably Steve’s guilt at potentially leaving an old man alone in a dinner in the middle of a date.

Fury agrees to come and they all take Lola from Agents of SHIELD into space because synergy. On the moon, Thor explains how he got hit in the face with blood while flying through space, which is the second most hardcore thing to happen in this issue. Evidently, the blood belonged to Uatu who’s moved from the interior of his lair to outside so he can give us this dramatic pose. 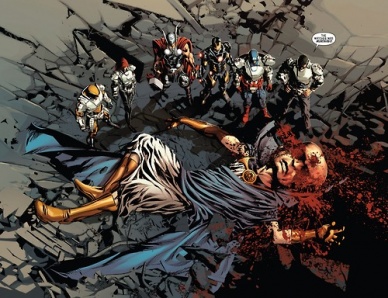 Also, I’d like to note that it looks like Uatu’s body was initially drawn much less gorily and then someone slapped some blood onto and around his face. Like I can’t tell where some of that blood is meant to land, or if it’s even finished landing. Also of note, everyone’s spacesuits lack helmets. I’m sure there’s a good nerd reason these suits work but why even have them if they don’t have helmets for oxygen? Are there even action figures coming out? It’s mind-boggling, but not as mind-boggling as Captain America’s insistence that The Avengers can’t conduct the investigation because they’re not murder police. Because clearly dealing with New Universe characters is a much higher priority than the death of a guy who was practically a god.

Fury agrees to lead the investigation, contacting a bunch of B through C-listers and telling them to go look for leads to Uatu’s death. Black Panther and Emma Frost team up to be exasperated by Scott Lang while Winter Soldier and Gamora presumably do the same with Moon Knight. The real highlight of these three teams is Punisher and Dr. Strange who both share this twisted sense of punishment (Strange sends a guy The Punisher’s been torturing for an hour and a half to a dimension ruled by beetles) and they really deserve their own team-up series after this.

For the moment, none of them get as far as Spider-Man and The Thing who team up to fight a rampaging Mindless One in New York City. Like a fatal Garfield, The Mindless One is projecting its thoughts to everyone near it, revealing that it was used by someone(s) to help kill The Watcher and that the secrets from his gouged-out eyes have given The Mindless One self-awareness and they’re unable to cope with the secret knowledge they’ve been bestowed, just as I can’t deal with the fact that I have to go out and buy my own beer pong balls. I dealt better with the situation than The Mindless One apparently has, in one of the most hardcore sequences in recent event memory, it pulls out the Ultimate Nullifier it stole from the moon and shoots itself in the head with, I remind you, The Ultimate Nullifier. This results in a mini mushroom cloud in the middle of downtown Manhattan that…doesn’t kill everyone? Even Spider-Man and The Thing who were right there? Huh. Good for them. Not that they get any congratulations from Fury who just shows up, claims the crime scene as his own, and declares that it’s time to get to work.

Elsewhere, the rest of The Mindless Ones are being held in a cage, all of them screaming at the revelations from Uatu’s eyes. Two mysterious figures covered in shadows observe the cage and ramble about how the things they stole are changing them… evolving them. Opening their eyes even. Finally, one of them pulls out Uatu’s bloody eye. “But it’s not our eyes I’m most interested in opening.”

Guys. I think these people killed The Watcher.

Overall, this was definitely one of the better first issues to an event series from Marvel lately. With a strong murder mystery vibe and a cast of fan-favorites under the pen of Aaron and the illustrations of Deodato, this looks like it could be a really interesting series that combines intrigue and intense action into a beautiful mix.

Final Verdict: 8.3 – Buy! Or at least browse if you’ve got Event Fatigue.

Round Up: Who Killed The Watcher?

In each Confession Booth, we’re going to go over the list of suspects we have in regards to who murdered Uatu. If you agree with one of our guesses, disagree, or think you’ve caught onto something we’ve missed then let us know in the comments!

Those Two People Holding Uatu’s Eyes: They probably had something to do with this.

Vanilla Nick Fury: We talked about this last time but he’s a master spy who would love to get his hands on the world’s secrets. And considering how he’s been out of the spotlight for a while, there may be a lot of suspicion as to where he’s been. Also, he made a lot of very dramatic poses this issue. Foreshadowing or just happenstance thanks to Mike Deodato characters’ inability to find good lighting?

Black Widow: Natasha was discussing her love of hunting bear in the diner scene this week. Could she be going after the biggest (figurative) bear of all?

Tomazooma: THE DEATH THAT WALKS

Here we are: the final issue of “Original Sin”. It’s been a crazy and wild ride, one in which we were mostly right about how it’d turn out. Check out our sorta spoiler-containing review followed by a definitely spoiler-filled recap after the jump!ReviewWritten by Jason AaronIllustrated by Mike DeodatoIt’s all been building to this! Today, Marvel is proud to present […]

We are almost finished with Marvel’s second big event of 2014: “Original Sin”! Check out our spoiler-free review and our major spoilers recap below!ReviewWritten by Jason AaronIllustrated by Mike DeodatoThe LAST BATTLEGROUND!Somehow, Jason Aaron and Mike Deodato created a comic that was straight up twenty pages of screaming. “Original Sin” #7 attacks the reader like […]

Welcome back to yet another edition of Multiversity’s coverage of Marvel’s “Original Sin” crossover, Confession Booth. This week, the bullets start flying as the killer all but names his or herself and Rocket Raccoon makes his 33rd appearance in a month.As always we’ll start with a spoiler-free review followed by a spoilicious recap.ReviewWritten by Jason […]