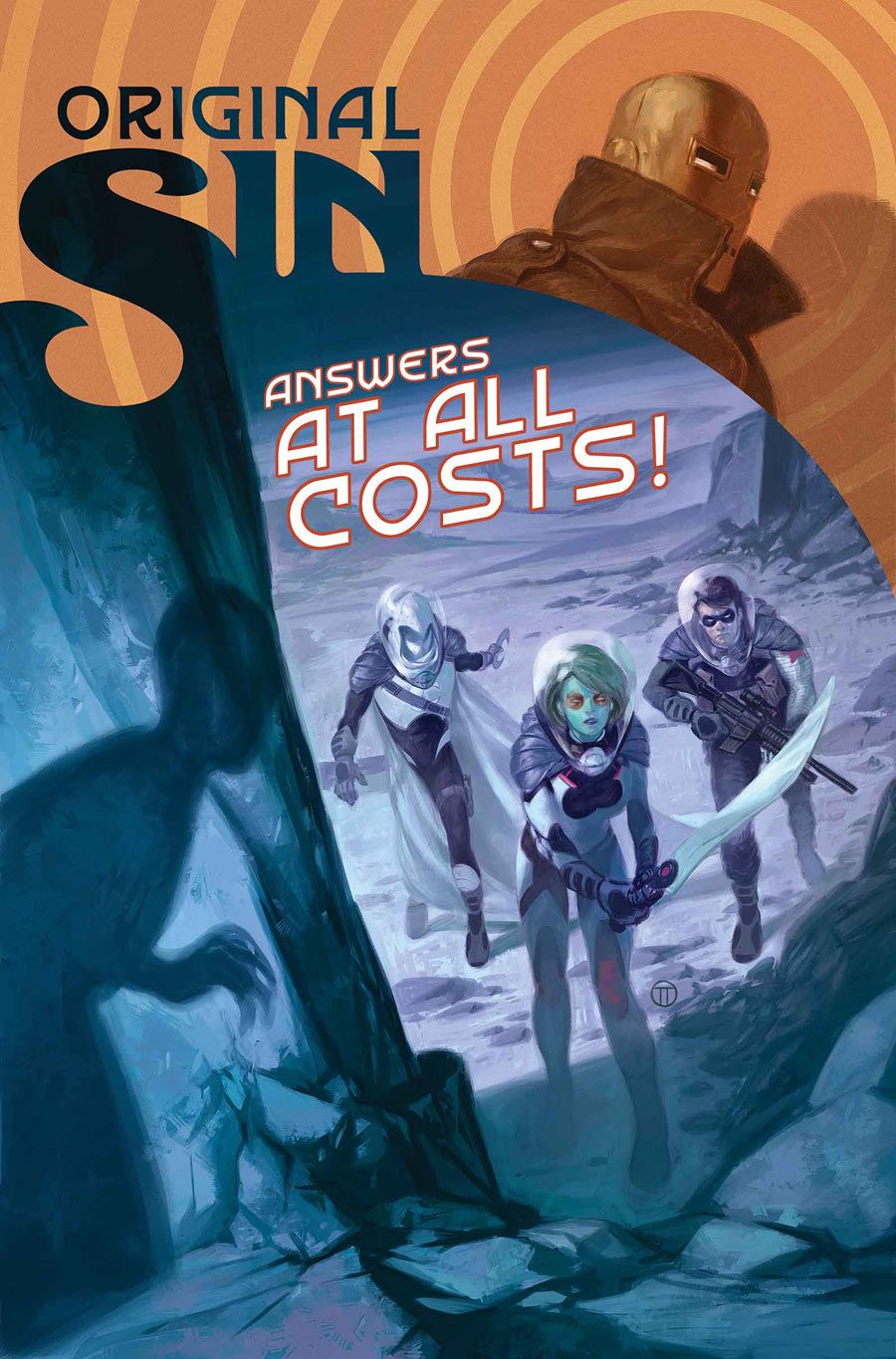 Welcome back to Confession Booth, Multiversity’s ongoing analysis of Marvel’s “Original Sin” event. Once again, we’re starting off with a spoiler-free review before getting into a recap of the issue itself, followed by our usual guesstimating at who killed Uatu. Okay, it may seem really obvious this week. Yes, this seems like a really poorly thought out gimmick. Let’s just get the damn review started. 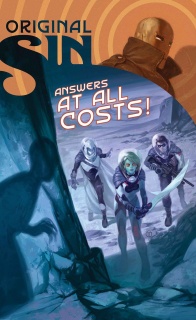 ANSWERS AT ALL COSTS.
• In the wake of last issue’s explosion of secrets, the heroes of the Marvel U are reeling, leaving Nick Fury to stand alone.
• He Who Holds the Eye is still on the run, and now we meet his boss, the villainous mastermind behind the raid on the Watcher’s lair.
• And in deep space, the Winter Soldier leads a team that uncovers the most bizarre murder of all.

In the words of Christopher Walken: “Wow.”

“Original Sin” #3 was a crazy issue in a medium where a giant purple space man eating an entire planet of superheroes was considered a “lower-tier” event.

In some ways, this hurts the series more than helps it. With The Orb’s actions from last issue throwing the Marvel Universe into disarray, we’re now facing a “Civil War” style conflict among some of the heroes in the Marvel Universe. That’s not entirely surprising considering that it’s been a cycle of sorts to have one Marvel event full of inter-hero conflict followed by one that unites them (“Civil War” into “Secret Invasion,” ‘Dark Reign’ into “Siege,” “Avengers vs. X-Men” into “Infinity,” etc.) but some jaded Marvel fans may be upset at yet another book revolving around Earth’s Mightiest fighting amongst themselves.

And it is every bit as radical as it sounds.

“Original Sin” is event storytelling in every sense, mostly thanks to Mike Deodato who combines the intimacy of noir with the grand-scale action of a space opera. From the faded flashbacks showing how The Orb started his quest to becoming the man who changed the world to giant corpses strewn through space, Deodato never loses the significance of his characters. Even when Fury is slouched in his chair, going over data, it never seems like a small moment. That dedication to making events larger than life is important, especially when it comes to the flat-out crazy moments that punctuate the issue.

Of course, those WTF moments can be seen as sometimes a little too crazy. Aaron’s been doing a phenomenal job with dialogue and character work in this series so far, but there’s one face-heel turn that seems completely out of nowhere in a way that flies in the face of some of the characters involved.  If you’re a big fan of particular characters, you might be pretty incensed by the final page. Add to that the various teams that seem to be investigating seemingly random crime scenes and the lack of any Avengers at all and “Original Sin” might seem like a disheveled mess.

And honestly, it kind of is. But that’s the mystery game isn’t it? It wouldn’t be a suspenseful thriller if we knew what was going on. Granted, confusing comics don’t make good comics (I read enough of the New 52 “Stormwatch” to understand that). But I sincerely believe that, even if this mystery turns out to be nothing but hogwash, the journey that Aaron and Deodato are presenting to us at the moment is a non-stop thrill ride that smartly skirts around the edge of event comic cliches (including a nice reference to the biggest event comic of all time) to make something that’s incredibly exciting.

Final Verdict: 7.5 – Buy! (I found it to be really fun but I can recognize that some readers may not appreciate the complete insanity spewing from “Original Sin”)

Now then, on to the spoilery bits. Seriously, if you have not read “Original Sin” #3 do not continue reading. And if you wanna leave a comment, zip down to the bottom of the page as fast as possible or just e-mail me a vague threat. Either will sate me.

Once again, we have a haiku synopsis of the last issue of “Original Sin”:

Who the hell are these people?

“Original Sin” #3 opens with The Orb auditioning to be the Big Bad of a Marvel summer event and Dr. Midas, a smooth villain with experience who’s looking to get back into the game, appreciates the kids’ moxy. Mostly because said kid delivered a rewritten version of Moloch’s famous monologue from “Watchmen” about The Comedian coming into his bedroom at night and making vague warnings about threats to come. Apparently The Watcher did the same thing to The Orb because he was upset that the latter’s powers allowed him to see into The Watcher’s home and collection. Or because he seriously cannot believe that his big break event comic is really going to be about The Freakin’ Orb of all people.

Dr. Midas likes the cut of The Orb’s jib and, with Exterminatrix, agrees to join him in robbing The Watcher’s house and his secret-filled eyeballs. There’s no way this could go wrong.

On the next page, everything goes wrong. The Orb unleashes The Watcher’s secrets on everyone in the immediate area, which causes the main heroes to ditch the title so they can all go have their tie-ins — and for an adorable girl to realize that true love was staring her in the face. 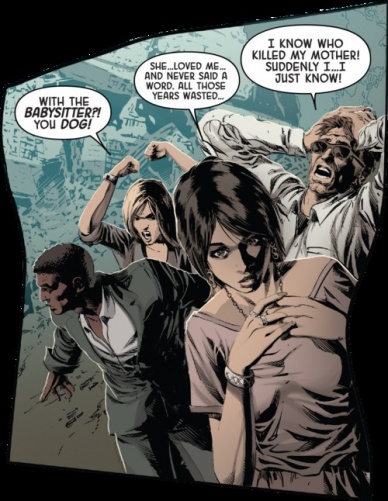 Also, someone’s dog hooked up with a babysitter. Gross, Marvel.

Nick Fury apprehends The Orb which is easy to do since, despite the eyepatch, Nick Fury takes down guys with two eyes all the time anyway. You know, overcompensation and such. Unfortunately, The Orb insists that he’s still not the murderer so it looks like we’re still gonna be tracking down who killed The Watcher rather than just having everyone talk out their problems for the next five issues.

Meanwhile, those three teams that were sent by someone I thought we all agreed was Nick Fury then wasn’t have found a bunch of shell casings from the crime scenes they were sent to investigating. Team BlackAntWhite (Emma Frost, Black Panther, Scott Lang) found a dumping ground for various monsters in the center of the Earth’s core (rad statement), while Team #TrueDetectiveSeason2 (Punisher and Dr. Strange, who seriously deserve their own buddy cop series) are chilling on some dimension where other dead monsters with mysterious bullets are laying about. The Punisher interrupts Strange bragging about how he’s going to be part of the MCU by informing him that whoever sniped this monster had to be an insanely talented marksman. In fact, only about ten exist on Earth that he knows of. There’s no official list but I wager that it has to include himself, Nick Fury, Bullseye, Bucky, Black Widow, Deadpool, Dum Dum Dugan, Squirrell Girl, Deadshot, and Deathstroke. (I sort of ran out of Marvel characters who I know are good assassins).

Strange then proceeds to say things like “Good. I like you uneasy,” which makes me consider changing their name to Team #HannibalSeason3. No matter what, I am definitely writing fan fiction right after this article.

Meanwhile, the groups’ mysterious boss watches their activity on a screen. He is definitely not Nick Fury.

Over in space, Gamora and Bucky are talking about how well their movie careers are going while Moon Knight awkwardly tries to wedge into the conversation so he can talk about how Brian Wood is taking over his solo series. Bucky and Gamora rightly shut him the hell down when they discover bullet holes all over the planet. At first they just think it was some idiot who couldn’t aim right before Moon Knight activates his Deodato splash page and reveals that they are on a living planet. Not Ego the Living Planet, but still one all the same. Jeff the Living Planet, probably. Dude hasn’t been seen in a while.

Before Gamora and Moon Knight can call in to their boss, Bucky silently walks off and explodes their ship, their only way off the planet.

Fury meanwhile is relaxing in his La-Z-Boy, staring at The Watcher’s eye and wondering why it’s not reminding him of any of his secrets. Also whether or not anyone would notice if he just jammed it right into his head hole. All of a sudden, Bucky jumps in from the aforementioned planet and offers his opinion on the matter. 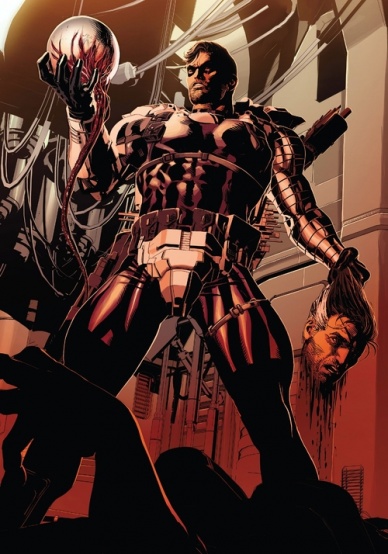 He’s right, Fury. If you just lie about the one eye thing, you’re gonna look tacky. Codpieces are where it’s at.

So Who Killed The Watcher?

The good news with this issue is that the range of who killed The Watcher narrowed down a bit. If the Punisher is to be believed, then it had to be one of the top ten sharpshooters in the Marvel Universe. I made a joke list before and an exact one would probably require years of internet forum debating before its completion so let’s just assume that whoever killed The Watcher is also a really good shot.

James “Bucky” Barnes: Call me crazy, but I think Bucky had something to do with The Watcher’s death. There’s been a few subtle hints (like Moon Knight saying he had a connection to the mysterious boss last issue, acting cold around his teammates, and Bucky decapitating Nick Fury) but I don’t want to count my chickens before they commit more gruesome murders.

For real, though, Bucky just became ridiculously popular thanks to the recent Winter Soldier movie and this seems almost completely out of left field. If anything, it’s likely he’s been brainwashed (again), although this could have something to do with Bendis’s run on “Avengers”. When the Next Avengers (Remember? From that adorable straight-to-DVD cartoon movie?) see Bucky!Cap they mention that he goes on to become horrible or something. Perhaps this could be the start of Bucky’s descent into infamy (again)? 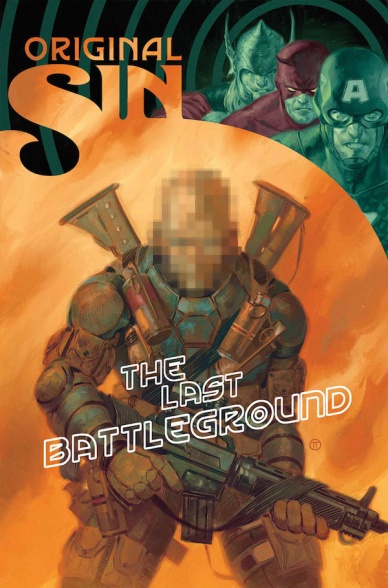 Odds of Murdering the Watcher: 2:1

Odds of Being the Grand Mastermind: 5:1

Nick Fury: But he is dead! Look, there’s his head! He’s a dead end! You may be right, rhyming readers, but when hasn’t Nick Fury died? Dude goes through, like, four Life Model Decoys on his morning commute to Denny’s. That could be the case here too. And it’d be a good explanation of why Uatu’s eyes didn’t unveil any of his secrets: because it wasn’t his organic body!

Odds of Being the Grand Mastermind: 3:1

Deadpool: In it for the lulz.

Odds of Anything to Do with This Event: 0:1 but hey, The Orb and Oubilette got some screen time. Anyone’s free game.

Check back with Multiversity in two weeks when we see the Marvel Universe’s reaction to Bucky’s (violent!) return! If you have some alternate theories on what Bucky, Fury, and the “Original Sin” cast is up to let us know in the comments! 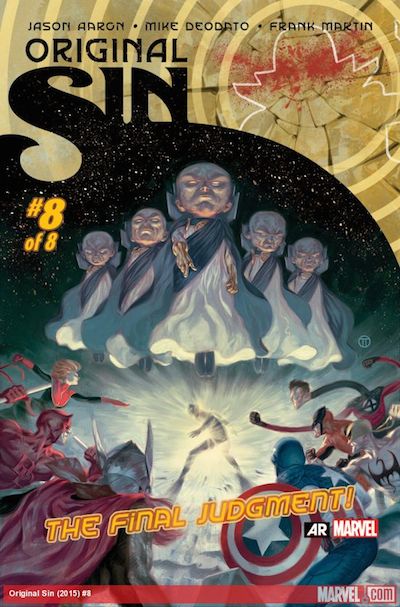 Here we are: the final issue of “Original Sin”. It’s been a crazy and wild ride, one in which we were mostly right about how it’d turn out. Check out our sorta spoiler-containing review followed by a definitely spoiler-filled recap after the jump!ReviewWritten by Jason AaronIllustrated by Mike DeodatoIt’s all been building to this! Today, Marvel is proud to present […] 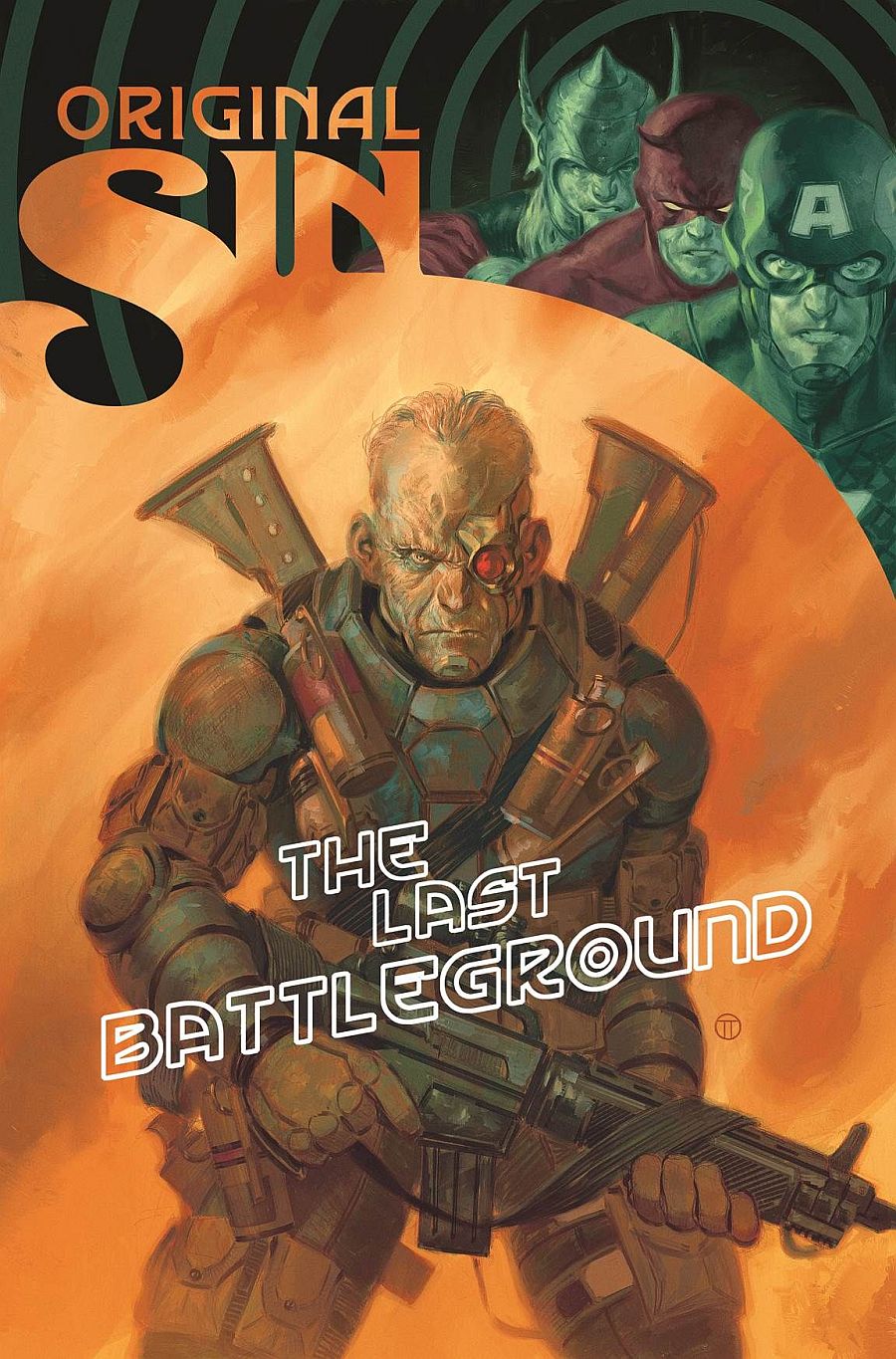 We are almost finished with Marvel’s second big event of 2014: “Original Sin”! Check out our spoiler-free review and our major spoilers recap below!ReviewWritten by Jason AaronIllustrated by Mike DeodatoThe LAST BATTLEGROUND!Somehow, Jason Aaron and Mike Deodato created a comic that was straight up twenty pages of screaming. “Original Sin” #7 attacks the reader like […] 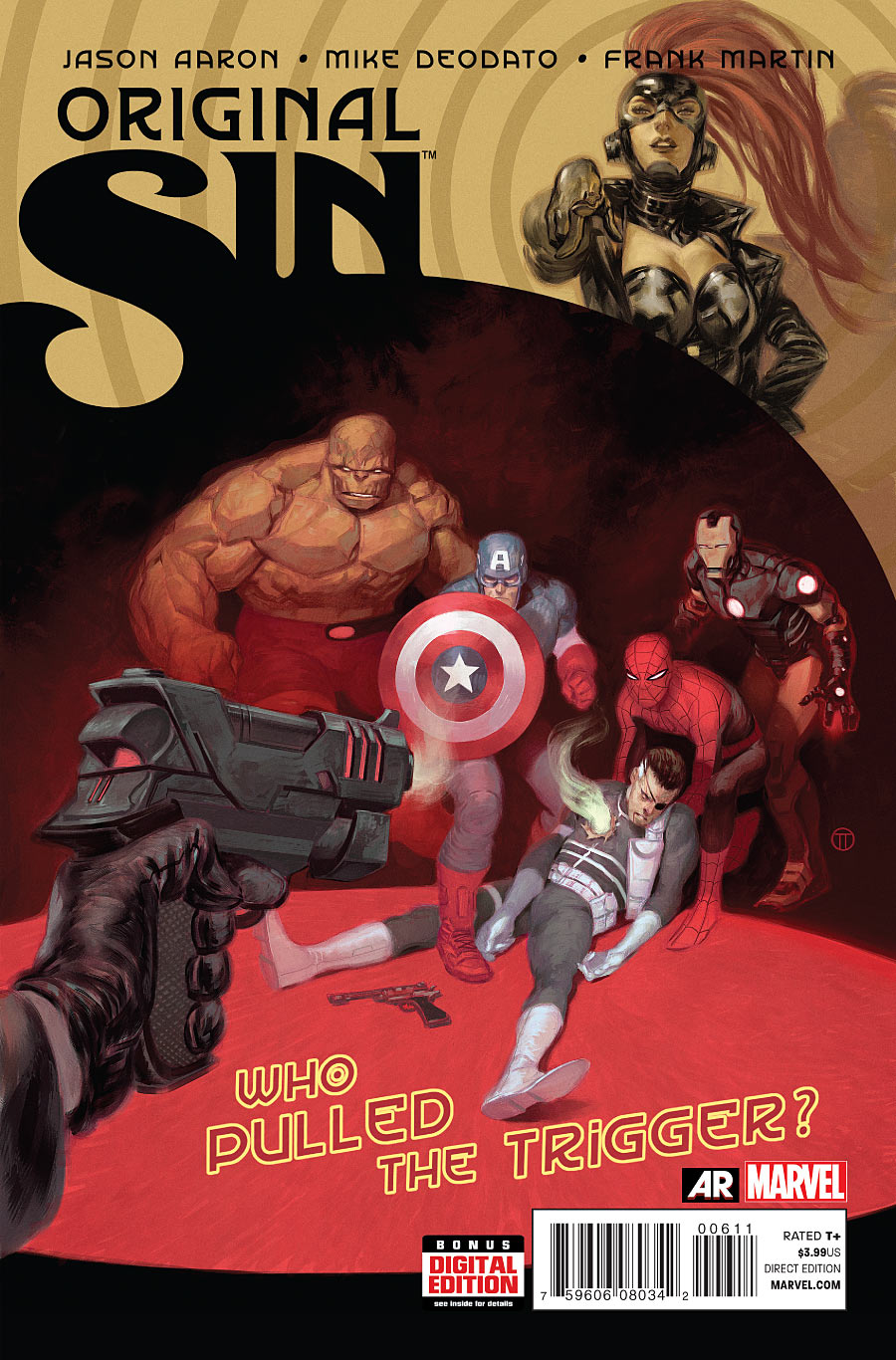 Welcome back to yet another edition of Multiversity’s coverage of Marvel’s “Original Sin” crossover, Confession Booth. This week, the bullets start flying as the killer all but names his or herself and Rocket Raccoon makes his 33rd appearance in a month.As always we’ll start with a spoiler-free review followed by a spoilicious recap.ReviewWritten by Jason […]