Galen DeMarco is one of the many 2000AD characters co-created by John Wagner and Carlos Ezquerra, and has been a mainstay of both the “Judge Dredd and her own “DeMarco P.I.” strips. ‘An Eye’ just wrapped up in “Judge Dredd Megazine” #412. For a deeper look into the strip, writer Laura Bailey and artist Paul Williams have put together this commentary on the strip. Let’s dig in!

Laura Bailey: ‘An Eye…’ begins with Galen visiting a new client called Charlu. He wants Galen to monitor his mother Pawla as her behaviour concerns him. Is it fair to covertly track someone if you’re worried about them? The prospect of it doesn’t sit well with Galen.

This is the first series of “DeMarco P.I.” I’ve scripted, so I wanted to begin ‘An Eye…’ as a statement of intent/setting out a stall of my interpretation of Galen. Hopefully Paul and I will work together on a Galen story again, and with every story told I hope the reader will feel like they know her warts and all. A slower pace I think is a great way to start, like a palate cleanser from stories that have been told before. 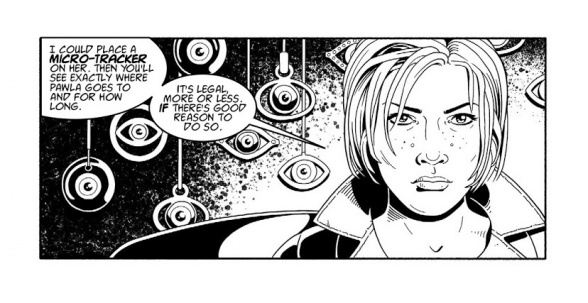 Paul Williams: There are a couple of different visual tricks used throughout this series to emphasise the different modes that we see Galen in: on the job, off the clock and survival. Firstly, she appears neutral and composed during the consultation that opens the first episode because I figured that this would be a key part of her professional persona, particularly when faced with as emotional a client as Charlu! She’s depicted as quite straight-faced and guarded early on, almost to the point that the reader might struggle to connect with her, though she definitely has a sense that she’s walked into a crazy situation and you can see hints of “what the f—-?!” creep into her expression as that meeting goes south.

Later we see Galen on her own time and, in that relief we all feel when we’ve knocked off for the day, she’s revelling in just getting to inhabit her own personality and be a bit goofy. She’s much more animated and expressive here than in the first half of the episode, which (hopefully) is when she begins to read as a much more human character. 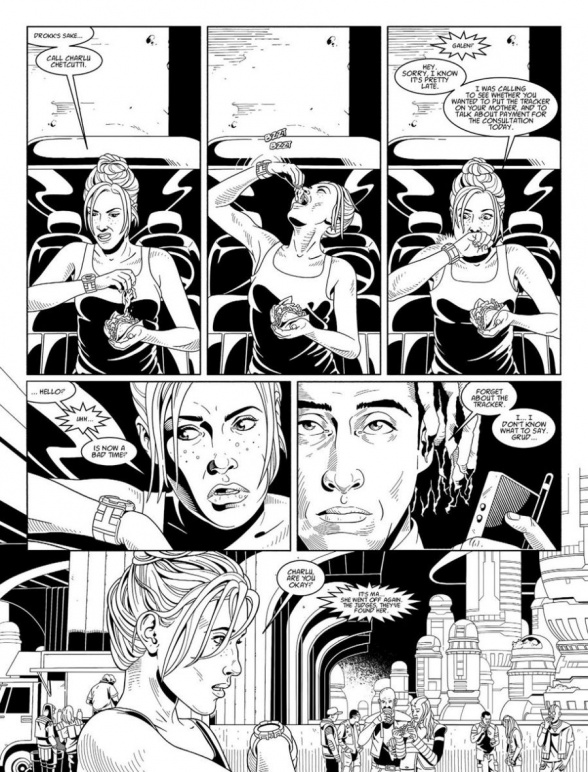 LB: At first Galen had no interested in working for Charlu, but now her diary is thin she decides to take it on. This means she’s primarily considering herself when agreeing to work on this particular job, it’s understandable but it clouds her thinking from the start. Had she dug a little deeper and not been so judgmental when meeting Charlu and Pawla, what transpires could have turned out differently.

PW: After the unfortunate events that end part one, we see an unprepared DeMarco become emotionally invested in this case after all and begin a rather slapdash investigation. Much of this episode is then told with a grid-like and formulaic choice of panel layouts which is intended to imply procedure. That can be a risk as it’s not always the most exciting style of storytelling to look at (and reads more like a storyboard at times), but this will pay off later. 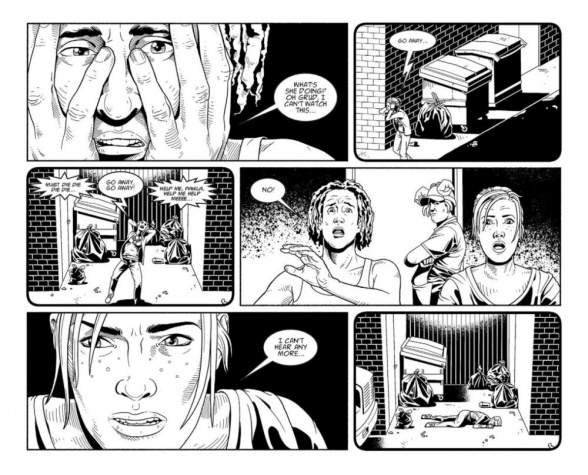 LB: We all deal with our mistakes differently, part of this story shows how Galen tries to atone for hers. True to Galen’s character, she has the best of intentions but reacts impulsively when faced with the consequences of her decisions. Unfortunately, had she sat back and reflected a little she would have realised she’s breaking and entering, I doubt the law would overlook it just because she means well. Regardless, Galen isn’t a judge anymore, her code of conduct is dictated by her moral compass instead of the Halls of Justice.

PW: I must admit, one of the things that excited me the most about being put on this strip were the moments of self-doubt and misjudged decisions that you don’t always see from lead characters in a series. I related to that hard, as some who (like most, I assume) has the odd screw up in my life and career despite best intentions. There’s a lot to say about the positives of having strong, female leads in this day and age but I think it’s also important that those characters are depicted as multifaceted humans. 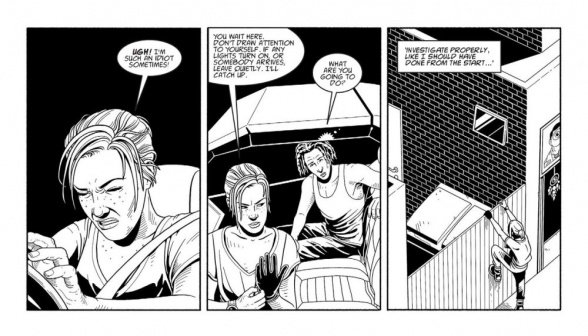 PW: I mentioned that I had kept the panel layouts quite grid-like for Galen’s investigative sequences, but actually the whole thing has had a somewhat “traditional” look to it up until a certain point. And that point is when a whopping great action sequence occurs in the final episode!

Galen’s lack of preparedness when taking on this case means that she has found herself cornered by a knife-wielding conman, unarmed. Here I break out the dynamic panel layouts that I’ve been itching to use but have reserved, not only for added emphasis but to express that this investigation has really gone off the rails. In fact, the first use of a tilted angle in the entire strip is during the cliffhanger moment at the end of part two. 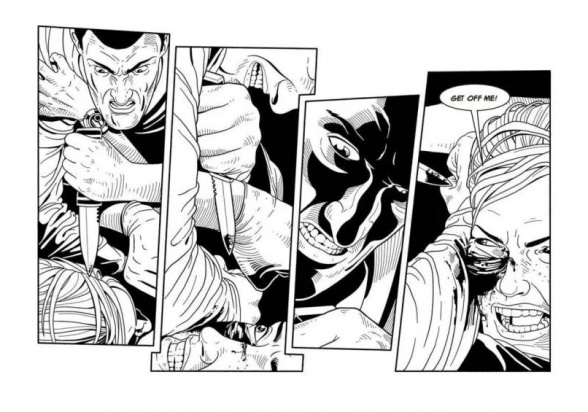 PW: In terms of how you go about depicting a fight scene like this as an artist, the intention is to lead the reader’s eye across the page in a way that will make them feel the movement and physicality. For example, I chose a wide space to show the moment that Galen is sliced in the hope that the reader will feel the weight and speed of the knife as their eye crosses the page with the action. The chaotic panel layout also adds a sense of disorientation and struggle, following on from the more traditional compositions that preceded it.

LB: The violence in the final part of this story is shaped from two things, a lucky escape a friend and me had with this nasty guy, and also advice other women have given me on defending yourself if you’re unable to get away (not saying how Galen retaliates is a good idea). I can’t say too much without spoiling the most gruesome part, but it’s suggestive of well known idiom. It also ties into the story’s ending and the question I hoped it would poise: what constitutes as justice from the perspective of a Mega City civilian.