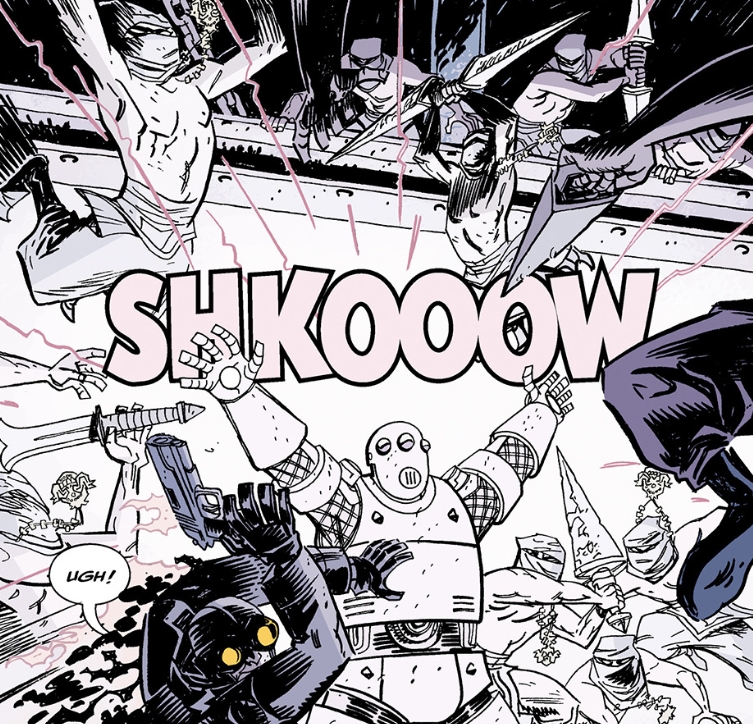 Welcome to another Hell Notes. I’m trying something a little different this time. Instead of focusing on a particular story, I’m going to be looking at a story element that has appeared frequently throughout the Hellboy Universe: Vril.

Please note, this column contains spoilers for those that have not yet read up to and including Sledgehammer 44 #1. 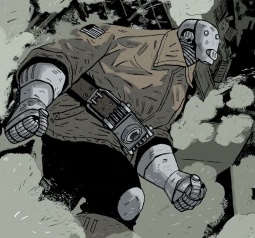 Project Epimetheus, AKA Sledgehammer
In this month’s Sledgehammer 44, we were introduced to a huge suit of armour that went around frying Nazis. This isn’t the first time we’ve seen something like this. A prototype of the Vril Energy Suit (V.E.S.) appeared in 2007’s Lobster Johnson: The Iron Prometheus, and the mysterious Vril energy that powered it has appeared in so many stories now I’ve lost count.

But what is Vril? And why is it so important?

To answer that, I have to go all the way back to the beginning, and I don’t mean Hellboy: Seed of Destruction, I mean the beginning of the world, when one of the greater spirits, a Watcher by the name of Anum, reached up into the sky and stole God’s own power. It was Flamma Reconditus, the Secret Flame, also known as Vril. 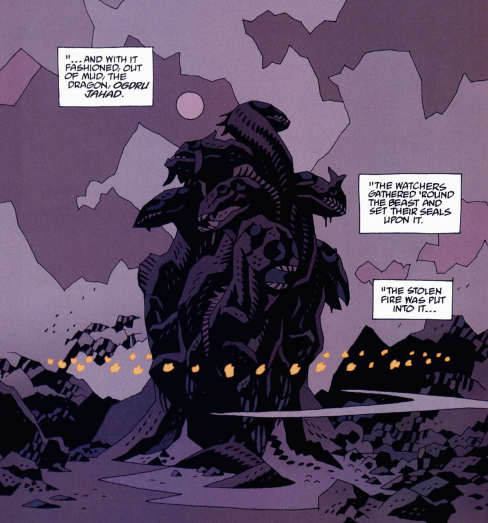 From mud, Anum fashioned seven dragons, the Ogdru Jahad, and placed the stolen fire inside them. This was the first life on Earth, and more quickly followed when the Ogdru Jahad birthed 369 Ogdru Hem. The Watchers went to war against the Ogdru Hem, and when the creatures were finally defeated, Anum again reached up with his right hand and with the Vril power sealed away the Ogdru Jahad, and cast them into the abyss.

Anum was later killed by the other Watchers, but the secret of using Vril was not lost with him. Thoth, the last king of the Hyperboreans (the first race of man) captured three Watchers and kept them in a garden in the city of Gorinium, the Hyperborean capital. From them he learned much, including the summoning and use of Vril.

From the 2nd Darkness Calls epilogue

Hecate, or as the Hyperboreans knew her, “Heca-Emem-Ra”, seduced Thoth and murdered the three Watchers. With their blood, she wrote their secrets on the walls of Thoth’s temple, so that any could learn them. Those that learned what was written became the later priests and kings of Hyperborea, and worshipped her as the Black Goddess. Within a thousand years, Hyperborea had fallen into ruin, and the Ogdru Hem had begun to creep back into the world again.

From then on the Hyperboreans were divided. The people of the right hand held true to the ways Hyperborea had been for a hundred thousand years, and the people of the left hand worshipped the Black Goddess. In their fading years, a Hyperborean priest passed on the knowledge of Vril to the budding human race (the second race of man). He was very selective, only a very few were deemed worthy of his teachings, for he knew that when enough Ogdru Hem awoke in the world, the Ogdru Jahad would return. 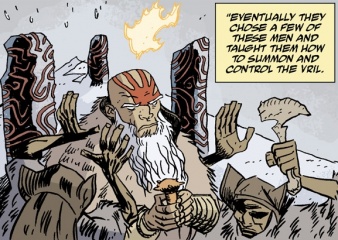 Shonchin with Hyperborean device
One of his students was Shonchin. Though Shonchin has made numerous appearances in the Hellboy universe, we know very little about him. He has been involved in some of the most pivotal moments of the books, most notably in Liz’s apocalyptic vision of the future in B.P.R.D.: King of Fear. However, as a mere human, he is unable to use Vril without aid. The Hyperborean priest gave him a device that he could use to summon and channel Vril, a device that would one day be found by the homunculus, Roger, and later used by Liz to destroy one of the Ogdru Hem, Katha-Hem.

That’s a really big deal. Ogdru Hem are really hard to kill. Virtually no human weapon can harm them once they’re fully formed, but with Vril humanity has a fighting chance. Unfortunately, in the commotion that followed Katha-Hem’s destruction, Shonchin’s device was lost, but it isn’t the only tool capable of summoning Vril. 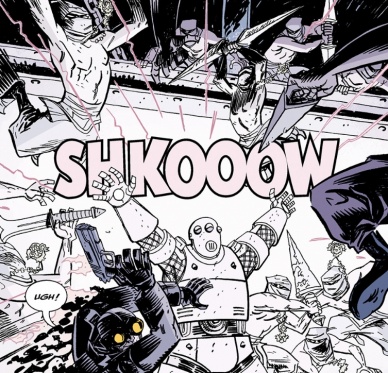 The Vril Energy Suit in action
Continued below

In The Iron Prometheus, set 1937, Professor Kyriakos Gallaragas invented a device he called “Anum’s fork”. This device was a critical piece of the prototype V.E.S. worn by Jim Sacks. Jim was just an average guy, but a good one, and through him Vril was shown to be very effective against mobsters and Nazis. Despite his best efforts (Jim gets killed), Anum’s fork was taken by Memnan Saa and used on a volunteer. Vril had a profoundly different effect on this man, transforming him into a dragon. This is not an isolated incident either. When Vril is used on the frogs during B.P.R.D.: The Black Goddess, they too transform into dragons. Jim Sacks, however, does not. Vril transformed him into a deathless, “newly evolved superbeing.” The reason, given by Professor Gallaragas, was that Vril in the power of evil hands can only produce evil, but Jim was a good man. 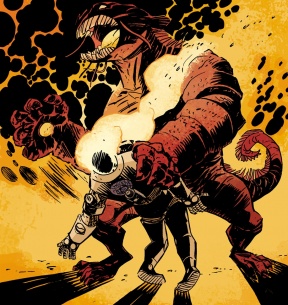 A man changing into a dragon
At the end of this story, Jim departs into his “new world” where the mysteries of the universe have been stripped away. The remains of the V.E.S. were found by Lobster Johnson’s crew, except for the helmet, which was in a Nazi submarine when it exploded, and Anum’s fork, the fate of which is still a mystery.

How Professor Gallaragas discovered how to summon and channel Vril with his Anum’s fork device is unknown. There was only one known record of the summoning and usage of Vril, an ancient text, “Flamma Reconditus: A true record of the workings of the Universal Machine”. According to the Vatican, there were only five copies of the book, one of which was destroyed in 2006’s B.P.R.D.: The Universal Machine. Perhaps the professor came across one of these volumes, but given their reputation as phantom books, it is unlikely.

Another device involving Vril power is a certain kind of Hyperborean sword. As readers, we were first introduced to one in 2002’s B.P.R.D.: Hollow Earth. It was possessed by the King of Fear, the leader of a race of subterranean people (This race was never formally given a name, but Abe Sapien refers to them as mole-men, so that’s what I’ll do too). The mole-men were created to be slaves by the “People of the Left Hand”, the Hyperboreans that worshipped the Black Goddess and fled underground with the collapse of the Hyperborean civilisation. The mole-men worked on machines that were going to be used to take back the world from the Ogdru Hem, but they began a rebellion and killed their masters. 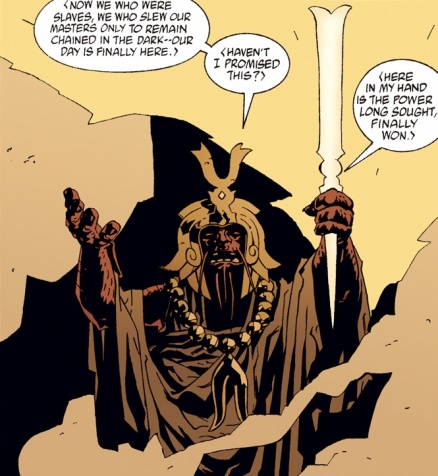 The King of Fear with a Hyperborean weapon

In Hollow Earth the King of Fear, leader of the mole-men, took a special Hyperborean blade and touched the tip to a source of Vril energy, which made the blade glow with power. He was never given a chance to use it, as he was shot shortly afterwards. Another of these swords showed up in Witchfinder: In the Service of Angels, set 1879. Here an expedition uncovered numerous Hyperborean artifacts, including a broken Hyperborean blade attached to a crudely-made handle of early human origin. This blade, like the one used by the King of Fear, glowed and was shown to be capable of releasing devastating Vril blasts. The blade was taken by the Heliopic Brotherhood of Ra, but this isn’t the last it is seen.

In the recent B.P.R.D. Hell on Earth: The Abyss of Time, the weapon is found in Chicago, and transports a B.P.R.D. agent’s spirit into the body of Gall Dennar, a human at the dawn of history. The blade is a major focus of the story, revealing how Gall Dennar’s grandfather first found it in Hyperborean ruins and used its Vril energy to defend himself.

There is one other known source of Vril energy, the most mysterious of them all; Agent Elizabeth Sherman. Liz’s pyrokinetic powers come from Vril energy, but how she got them and why she has them is completely unknown. In the past her power has given life Roger, she’s been used like a battery to power the mole-men’s machines, she’s destroyed Sadu-Hem, Katha-Hem, and even scorched the whole surface of the planet, killing hundreds of Ogdru Hem in the future, but since then she hasn’t used this power. Is it gone? Will she be able to use it again? And what is Liz? In The Black Goddess, when Liz breaks free of Memnan Saa’s control, a third eye opens in the middle of her forehead as she burns him alive. A third eye! The fact is, we know less about Liz than any of the main characters in the Hellboy universe.

Vril is humanity’s hope for the future. While Sledgehammer 44 appears to be merely a fun side story for now, I expect it will have a big role in the future. We may even see a V.E.S. in the pages of B.P.R.D. Hell on Earth some day. 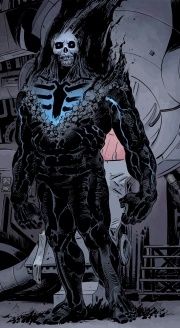 Extra Credit:
What the Hell is black flame?

We know that Vril is the Secret Flame, but there’s another kind of flame that has played a major role in the Hellboy Universe; black flame. It was used by the frog monsters to summon Katha-Hem, and the arrival of the Black Flame in B.P.R.D. Hell on Earth: The Return of the Master awoke a horde of Ogdru Hem. I don’t think it’s much of a stretch to say the Ogdru Jahad and black flame are somehow connected.

In Hellboy: The Island, when the beginning of the world was being revealed, the Ogdru Jahad are brought to life using the Secret Flame, but when night fell the flame darkened, and it is only then that the Ogdru Jahad awoke. It may be that black flame is Vril that has been corrupted. At least that’s my theory.

Well, that’s it for now. I hope you’ve enjoyed this one. As always, I’d love to hear your theories (especially if you have an interesting one about who’s inside the V.E.S. in Sledgehammer 44). 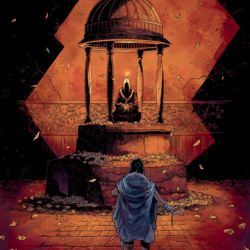 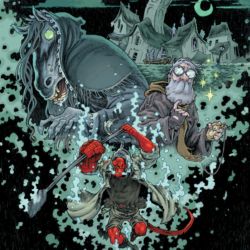 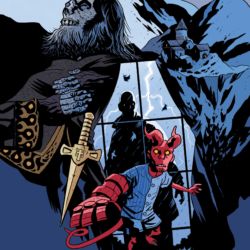