Welcome back to Hoax Hunters Backstage Pass, where you get a behind the scenes look at the work done by writers Michael Moreci and Steve Seeley. They’ll take you inside the big moments & mysteries of every issue. This month, the Hoax Hunters battled a big ass monster, learned in just what way Clive is up to no good, and got down with a little voodoo.

Remember that we’ll be spoiling these issues, so read the book before getting the inside look. It’s a hefty one this month – let’s strap in:

Before we get into the meat of the issue, there is a character capsule page at the front of the issue. This is something that comics have been doing more and more (recently Mind the Gap and Manhattan Projects come to mind). I guess on the “production” side of things: what made you decide to include this page, what do you want it to accomplish, and is this something that will be ongoing?

Michael Moreci: What we’re trying to do with the character capsule is enhance the experience – in terms of accessibility and ease – for our readers. I’ll be honest, some of the feedback we’ve gotten has been the reader expressing some confusion over the characters, who they are, how they fit in the Hoax Hunters organization, etc. And Steve and I realized that all this confusion, like 99.9% of it, was indicative of one simple problem: These readers had never picked up issue #0. They didn’t know it even existed. We never anticipated that being hurdle, but it has become one. And now, issue #0 is gone. Sold out with Diamond, and I don’t know any shops that still have it (though it is available on ComiXology). So we needed to find a way to bridge the gap on a character level, between issue #0 and where we’re at now, but without encumbering the story.

Also, this is something we plan on consistently doing. We want Hoax Hunters to be a comic people can jump into without too much difficulty. We’re tinkering with creative ways to achieve this goal–we’re thinking, in issue #6 (the start of a new arc) we’ll dedicate the first two or three pages to a “previously on Hoax Hunters…” segment. What we’ll do is utilize clips from the first few issues and explain everything you need to know. And we’ll do this without taking anything away from the current issue; these will be additional pages.

Did Jack think he stood a chance against that “chimera” with just a pistol? I noticed that seeing a cult member ripped in half didn’t phase the man.

Steve Seeley: He knew the gun wouldn’t kill the creature – he mostly wanted to get its attention. Not only was it a nod to Jack’s badass-ness, but unknown monsters are what the Hoax Hunters deal with and have to stand up to everyday. 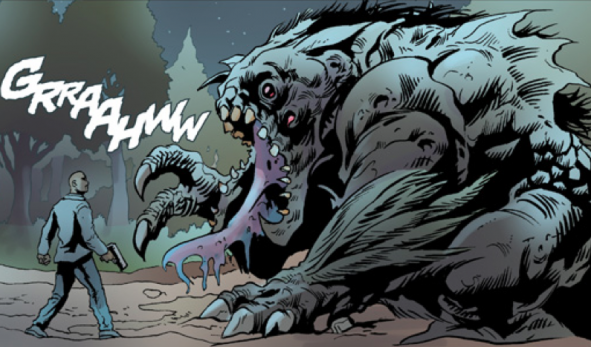 We then have a scene where we learn that Clive has control over the chimera (we’ll talk later about what he hopes to accomplish with it). He has a very distinct opportunity to destroy our heroes here, but says that cold-blooded murder is not “his way.” Yet we’ve seen him use the occult, which consequently leads people to their deaths. Does he just have a strange code of honor as to what constitutes “murder” or is there something else going on here? Is this a case where the ends justify the means for him?

MM: Like many cult leaders before him, Clive is the type of man who doesn’t take responsibility for the puppet whose strings he pulls. Despite pushing people to certain deeds through his powers of persuasion and manipulation, he still allows them to assume full responsibility for their actions. He’s not one to commit murder for the sake of murder–Clive’s a smart guy, and unless he sees a clear gain in such a bold act, he won’t do it.

Not to mention that he does, in a way, have a soft spot for Jack. Clive and Alan (Jack’s father) weren’t so much enemies – at least in Clive’s mind – as they were competitors. For Clive, they were working towards the same goal through their chess matches. The difference is that Clive is the outlaw, the Loki, the wrench in the system. And we’ll see, deep down, he wants – needs – someone like Jack to join him. Down the road, we’ll see why.

Clive says he’s continuing the “game” that he was playing with Jack’s father many years ago. There seems to be a definite grudge going on. How much does the “rivalry” between Clive and Alan drive things? How much satisfaction does he get from going up against Alan’s son now?

SS: I’d say the rivalry between Alan and Clive drives both Clive and Jack equally. Jack is fighting to find his father and Clive is essentially fighting to keep Jack’s father hidden.

Who’s idea was it to have the crow lifting Murder’s hand for a thumbs up? That was brilliant.

MM: Ha! Yeah, I love that moment. I think that’s another product of the Moreeley hive mind. 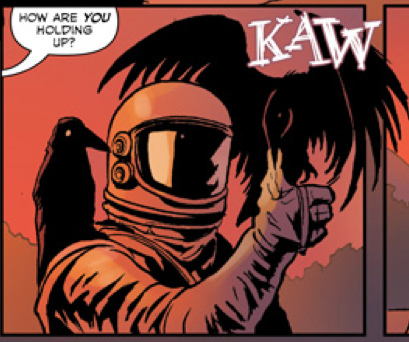 We move to a fascinating scene in which Jack asks Ken to tap into his mind. Ken is vehement in his objection to doing this on a team member. Will we see negative consequences to Ken using these powers, either down the road or in a sequence from the past?

SS: Absolutely. Someone (maybe Jesus?) wrote with great power comes great responsibility. And that’s true with Ken’s power. Mind reading has proved to be very beneficial to the team, but it is pretty dangerous, which is why Ken is apprehensive to use it on both a colleague and friend. 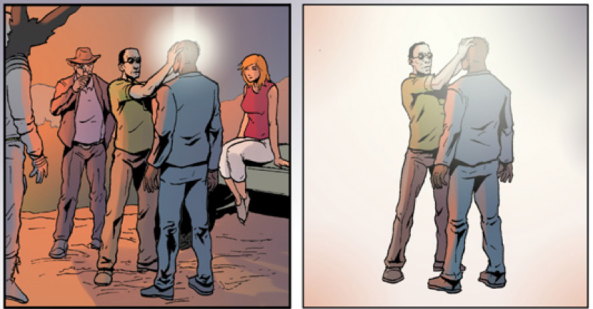 In the probing of Jack’s childhood, we find the big revelation of the issue. Alan was investigating the science of parallel universes and the travel between them. We also learned that Alan has been on a parallel world for 20 years now. Can we expect the Hoax Hunters to be taking a trip of their own sometime soon? Is this “multiverse” something we can expect to see in future arcs, or would the Hoax Hunters prefer to shut this activity down entirely?

MM: Multiverse hijinks are on the way! We’ll definitely see what’s on the other side of the universe stack, where Jack’s dad is, and what he’s been up to. That’s going to be an important part of future arcs and will only help to deepen the Hoax Hunters, uh, universe. A lot of different parties are invested in what’s going on in universes outside of our own, and we’ll see who these parties are (we were introduced to one of them–a character Steve and I refer to as The Faceless Man–in issue three). The building of this story will reveal the politics of those involved in the Hoax Hunters organization, what their agendas are and what they stand for. And with these political maneuverings will come a lot of challenging decisions for Jack, Ken, and Regan to make.

This is sort of a tangent of a question, but I enjoy sci-fi stories where the heroes interact with the weird and unfathomable as if it’s completely normal. When I read characters like Bones and Durand, I’m reminded of something like “Men in Black,” where these aliens engage in conversations matter-of-factly, despite their uncanny appearances. Can you guys perhaps talk about what informed your decision to create inhuman characters with such decidedly human tendencies and demeanors?

SS: Many of the cryptids (like Bones) have more or less accepted some sorta of humanity and have taken to acting more civilized, despite not being able to actually live in our society. But, there are plenty of cryptids that don’t speak, can’t speak, or could never take on any sense of humanity (like, the “chimera”) and there are cryptids who could, but choose not to.

While the Hoax Hunters come in contact with all the types of cryptids, it’s the first, more civilized, kind that tend to be the most prominent, since they tend to reveal themselves more easily.

In the interrogation of the Bokor voodoo priest, we learn the secrets behind Clive’s power and the origin of the “chimera” monster that he seems to control. I confess I don’t know much about the Bokors and their beliefs, but how much of that factored into your decision to use them in this story? Did you know much about them, or were they just a convenience for including a link to the “dark arts”?

MM: Well, I knew a little about the tradition of Haitian voodoo in Louisiana. I figured that, since we were in Louisiana, we might as well try to throw in some region-specific touches when and if possible. Turns out the inclusion of Etienne played a major role in the story, something I don’t think we anticipated in the very beginnings of plotting all this out. Sometimes, though, stories surprise you that way.

Now, of course, we do take a lot of creative liberties with Bokor tradition and culture. Our depiction is by no means completely true or accurate. We had fun with the whole idea of voodoo and utilized it in a way that worked for the story.

It’s said that Clive is trying to use inter-universal travel to escape “the end of the world”? That’s a juicy thing to end an issue with. How much can you tell us about that revelation? Does Clive himself have a hand in causing the end of the world? Or is this an even greater inevitability?

MM: It’s a big, bold claim to make, isn’t it? Clive is unreliable at best, a liar at worst. But he is on to something–this isn’t a Macguffin of the story. There is something happening with these parallel universes, with Alan, and with Clive. All of it intertwines with the deeper story Steve and I are telling in Hoax Hunters. Again, this isn’t the only thing we’re focused on, but we will see this danger swell in coming issues, and the Hoax Hunters will have to face it down. But there is, in fact, a danger of our world ending. Cue dramatic exit music! 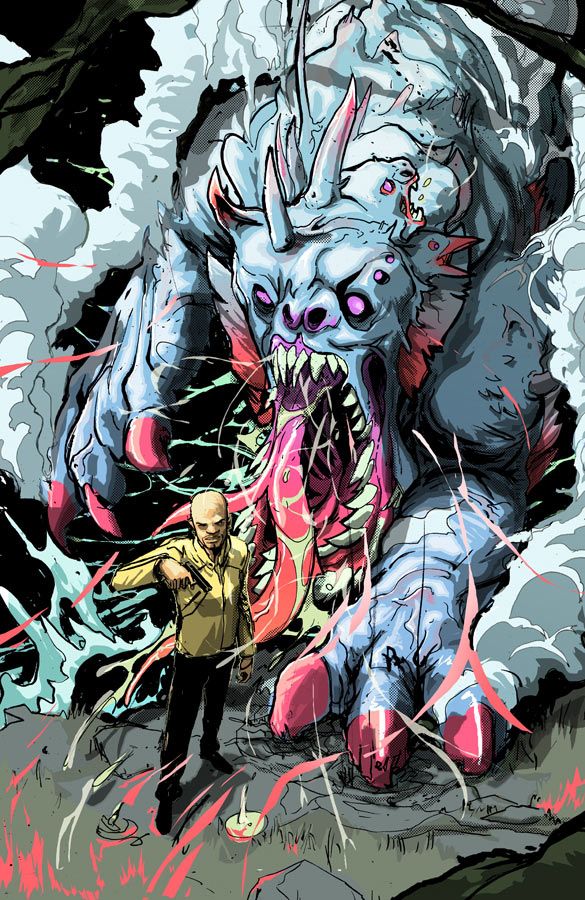 Welcome back to Hoax Hunters Backstage Pass, where you get a behind the scenes look at the latest issue of “Hoax Hunters” with writers Michael Moreci and Steve Seeley. They’re taking you inside the big moments & mysteries of every issue.Here it is – the finale of “Hoax Hunters'” first season. In the true spirit […] 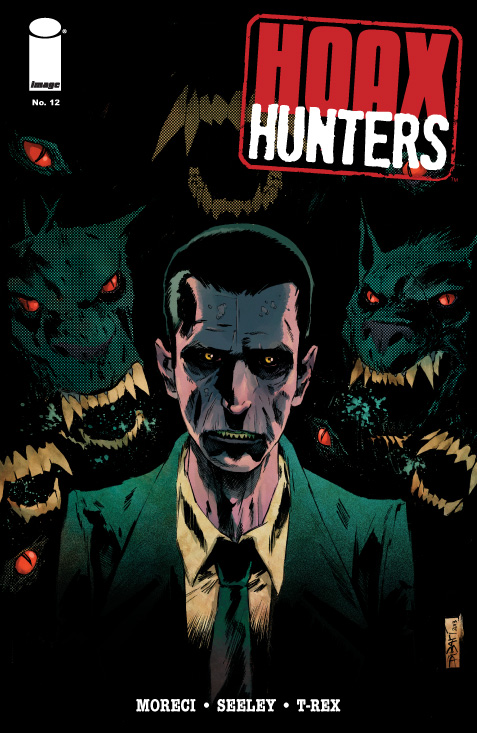 Welcome back to Hoax Hunters Backstage Pass, where you get a behind the scenes look at the latest issue of “Hoax Hunters” with writers Michael Moreci and Steve Seeley. They’re taking you inside the big moments & mysteries of every issue.This month the “Hoax Hunters” took a pretty physical beating across the board, supernatural secrets […] 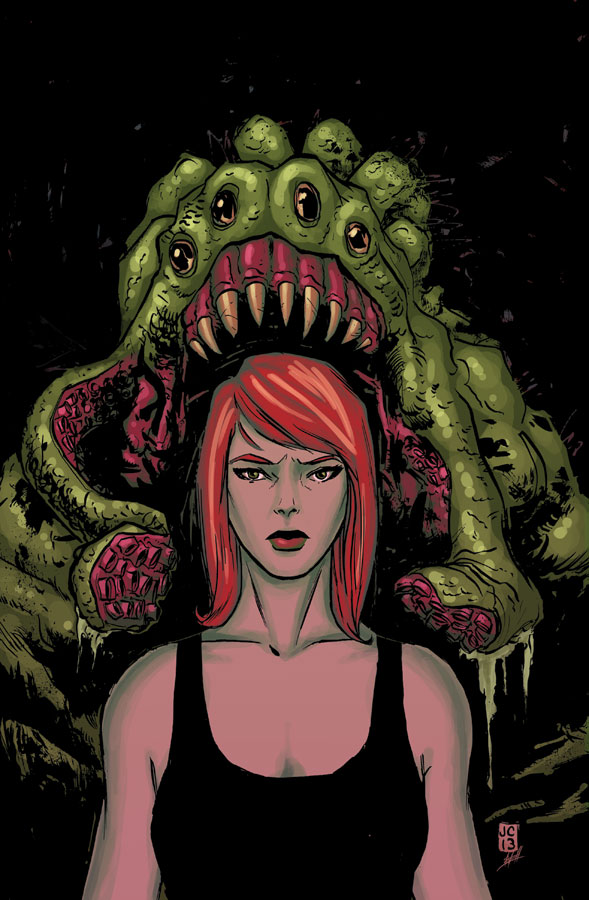 Welcome back to Hoax Hunters Backstage Pass, where you get a behind the scenes look at the work done by writers Michael Moreci and Steve Seeley. They’re taking you inside the big moments & mysteries of every issue.This month we have a previously unlikely romantic pairing, some meddling demon birds that can take down airplanes, […]