Welcome to Minding Mind MGMT, the new monthly column focused on the Dark Horse series “Mind MGMT” from Matt Kindt. Why a special column instead of a regular review? Because each issue is crammed with story, requiring no less than two reads to fully absorb everything Kindt packs into it. Each month, we’ll try to piece together the clues Kindt is hiding throughout the book, and speculate on what may happen next. We’ll also have occasional interviews with Kindt and reviews of his other work. This is a spoiler-heavy column, so turn back now if you don’t want major plot details revealed. 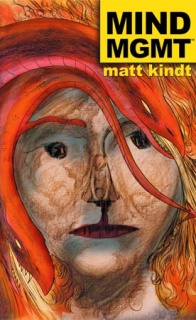 The cover
I’ve enjoyed the covers to the series so far, but this month’s really wowed me. I’ve been staring at it every day since it came out last week, and I’m still impressed at how much a bleeding man looks like a nose and mouth. Kindt was inspired when he had the idea for this layout.

Main Story
This issue picks up sometime after the end of issue two, after Meru and Bill have landed in China. Since the talking dolphin Meru was told to find last issue is on the cover to issue four, I didn’t expect it to show up until perhaps the end of this issue. Instead they locate it in the first two pages, and then it isn’t seen again. It talks by indicating letters on a board, and I’m embarrassed to say I looked at it for a hidden clue for far too long before realizing it was a standard qwerty arrangement. I hope the dolphin comes back into play, because its a very enjoyable idea.

The narrator, who is finally revealed to be Henry Lyme, the missing passenger, makes plain the hinted truth from the previous issues: Meru has found him multiple times before this current journey, she just doesn’t remember. This is an interesting twist, and adds depth to Meru’s introduction and conversation with her book agent in issue one.

As Bill and Meru follows the dolphin’s hint toward a small Chinese village, there’s a panel which made me laugh aloud. 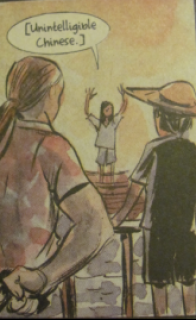 The two immortals catch up to them again, and Bill tells Meru to escape while he distracts them, promising to meet her at the village. She makes it to the village, where she is directed to an old man. He sees her as a warrior princess of legend, who fights for truth. She finds it, but dies from injuries sustained in her quest. The princess is reborn filled with sorrow for the knowledge she’s lost, and goes to find it again. This is another hint toward Meru’s previous attempts to find Lyme, and does not bode well for her. After she leaves, the old man draws the same rhino we saw as sign for Meru in the previous issue. I’m at a loss for what this could mean, beyond the symbol being more than just a one-time clue. The immortals show up shortly after and kill the old man, who sees them as oni demons.

Meru finally catches up to Lyme, and he promises to tell her everything as he leads her into his boat. The immortals and a wounded, angry Bill are not far behind.

The Field Guide
The blue text running the length of each page continues to illuminate the actions of each page, worldbuilding, clarifying, and hinting all at the same time. While I’m not completely sure just yet, the guide continues to indicate Bill is a Mind MGMT agent, not CIA. I assume he was (one of many) tasked with finding Lyme after the events on flight 815 two years ago. When the immortals are attacking, guide 3.7 helpfully hints at how he escapes.

Leading up to the attack, the Guide helpfully points out what Bill and Meru are doing wrong, such as failing to avoid an open space. Later, the guide 3.15 helpfully explains Meru’s error after leaving the village.

For the first time in the series, a page is missing a tip from the guide. This happens to coincide with the first splash page of the series as well, so perhaps Kindt couldn’t think of a good idea to fit with just the one image. I look forward to future issues to see if this is a reoccurring pattern.

The page where the old man paints the rhino from last issue features a guide mentioning the possibility of psychosis in some subjects. Considering the mental state of Perrier last issue and her relationship to that rhino, this could be an important clue later on.

Mind Memo
This month’s Mind Memo builds on the cover story from issue 2, which detailed the beginning of the Mind Marketing office in 1960. Jumping ahead to 1982, we’re introduced to Karl Box, a man who creates ad images which alter what the reader sees. There is a neat connection to the Perrier sisters, and a t-shirt idea which would be a great marketing tool. I’d buy one.

The Second Floor
This month’s ‘Second Floor’ story takes us back to 1918, Sir Francis (fictional, as far as I can tell), and the birth of the immortals. There isn’t much to this one, and it feels like the first part of a longer story, instead of a short story in a larger world. It’s a storyline I hope Kindt returns to sooner, rather than later.

The Fake Ad
This month’s fake product is Brain Buzz cola, an energy drink that’ll kick-start your head. Looking for hints to the secret code, there’re the obvious 16 fl oz, 1 pt, and 430mL printed on the can, and the less obvious shape in the page background which, when turned upside down, looks like it could be part of a 7. Issue two also had a number printed on the product, and what looks like a 7 and a 3 in the upside down background. Issue one didn’t have a number on the product, but did have an 8 (3?) and a 4 in the background. I had hoped this might be a code I could crack early, but it doesn’t look that way. The point is moot for now anyway, because the website the code unlocks (www.Mattkindt.com/mind) doesn’t exist yet, at least according to Chrome.

Final Thoughts
This book was another strong entry for the series, and remains a dense read. In a market where companies charge the same money for fewer pages and content that holds your attention for less than a quarter of the time, this book is a solid purchase every month. I have no doubt this will be something I can pull out and read years from now and still find something else hidden in the narrative.

If I’ve missed anything, or you have other thoughts or observations, please leave them in the comments below or shoot me an email.

If you’re not reading this book yet, get on board. Kindt has said the trade won’t collect all the bonus material, so you’ll be missing out. If you’re still on the fence, try the three freeteasers at Darkhorse.com.