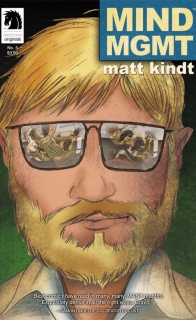 This month’s cover features Agent Lyme wearing his trademark mirrored glasses, reflecting some terrible violence. His mustache covers the right side of his mouth, so his expression is hard to read. I think he’s smirking, but I could be wrong.

The narrative begins exactly where issue four ended, with only a couple setting-revealing panels to remind the reader where the story is. After Lyme’s big stunt in Iraq, Mind MGMT moves him to lighter duty work for a while and call it a vacation. How long this lasts is ambiguous, but he and Natasha have a daughter who could be as old as six. It’s during one of these “vacations” when he teaches the dolphins from issue three to talk. Because his abilities are sometimes automatic, he begins to doubt the sincerity of everyone around him, including Natasha. Lyme’s family eventually ends up in Zanzibar, living in the same souvenir shop where Meru met Perrier. In a final effort to see if Natasha’s love is real or artificial, Lyme slaps her to test her reaction. It turns out Natasha was able to resist Lyme’s powers, but decides to leave him because of his doubt. (Or, did Lyme subconsciously make her leave? He was angry when he hit her, and his anger was contagious on page 6…)

Upset by the realization of what he just did, Lyme walks through the mayhem depicted at the beginning of issue one, with the same voice over. This, I’d like to point out, is a flashback done right. When it takes five issues for a story line to come around, you can trust the writer knows where he’s going. When Mind MGMT wraps up in two and a half years or so, I look forward to rereading the whole epic and searching for clues to the end I missed the first time around.

Natasha and Lyme’s daughter are killed in the chaos, and immortals are sent to stop Lyme. As he escapes, he decides Mind MGMT is too dangerous to exist. Then, and only then, does a “small, nagging voice” direct him to a burnt book store where he finds a young Meru. I had previously speculated on Meru being Lyme’s daughter, but both are depicted in this issue, and they’re wearing different clothes. He erases Meru’s memories of the incident, and finds a foster family for her. I wouldn’t be surprised to find out the “voice” was another agent who is using Lyme and Meru to take down Mind MGMT.

At this point, the narrator changes voice from Lyme to Meru, as she tells us how angry she is with Lyme. As the pursuing immortals board the boat and attack Lyme, Meru debates on who she should help. I suspect Bill will join (and decide) the battle before Meru makes up her mind next issue.

Every entry in the field guide is interrupted by the same ALL CAPS messages as the final pages of issue four. Previously, I thought these were messages from Lyme to Meru, but now I’m less sure. There’s a repeated message about this not being the first time, but whoever’s speaking thinks it may work this time. I suspect it will, which is why Kindt is telling us this iteration of the cycle. Of course, Kindt’s work in the past has tended to end somewhere between ambiguously and tragically, so perhaps not. Guide 5.5 asks us to focus on the “Talisman”, which I believe to be the rhino from the sign in Zanzibar. For reasons made clear this issue, it has special importance to Lyme.

Guide 5.11 is what made me start to doubt the identity of the speaker and the listener in this exchange. “You’re wondering who I am.” Well, by this point Meru knows who Lyme is – he just told her. It goes on to say the listener won’t believe if the speaker states it plainly, because the speaker has tried that before. It finishes by promising there are more of “you,” whoever the listener is.

This month’s case file is on the Achivist, the master monk who records all of history through his network of watchers. They’re shown observing the September 11th attacks, the assassination of JFK (once referenced already, in the map on the office wall in issue 4), the chaos in Zanzibar, and the erection of the Easter Island statues. The memo notes the history kept by the monks would be a powder keg in the wrong hands. Hands like true-crime writer Meru, perhaps? The monks’ home office is in Shangri-la, and I’d be excited to see the main story stop by there sometime in the future. 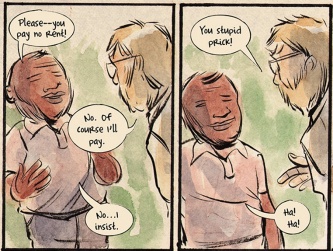 The Second Floor
This month we’re shown the Annulment Department, headed by Madame Rienne. She and her agents helped the field agents forget memories they no longer wanted. We see her with the bald immortal man currently chasing Lyme, begging to forget the dead (in Zanzibar?). He asks to be left a shell with nothing but pain, which goes a long way to explain his current determination to get Lyme.

She also works to keep Mind MGMT secret by removing knowledge of it from potential whistle blowers.

The back cover
This month’s ad is for Clearsoul cleansing pads, for minor acne outbreaks. The text promises Mattkindt.com/mind will be up in 30 days. That’s usually code for “about a month, when the next issue comes out,” which is actually 28 days from the release of issue 5.

If you spotted something I missed, had a different conclusion, or have any other questions, comments, or concerns, please leave them in the comments below. As user Reiterate pointed out last month, I’m not catching everything.