Welcome to Tales from a Galaxy Far, Far Away, our long on hiatus column about Marvel’s Star Wars comics! In taking over this column, I’ve decided to revamp it a bit, so here is the plan going forward: On even months, I’ll be recapping the current Marvel series, discussing the larger themes and how all the pieces are fitting together. On odd months, I’ll be going back and catching up on the backlog of Marvel stories, as I’ve only been reading some of these books since Marvel acquired the license.

This month, we are starting by recapping the first two issues of the newly relaunched “Star Wars” title. 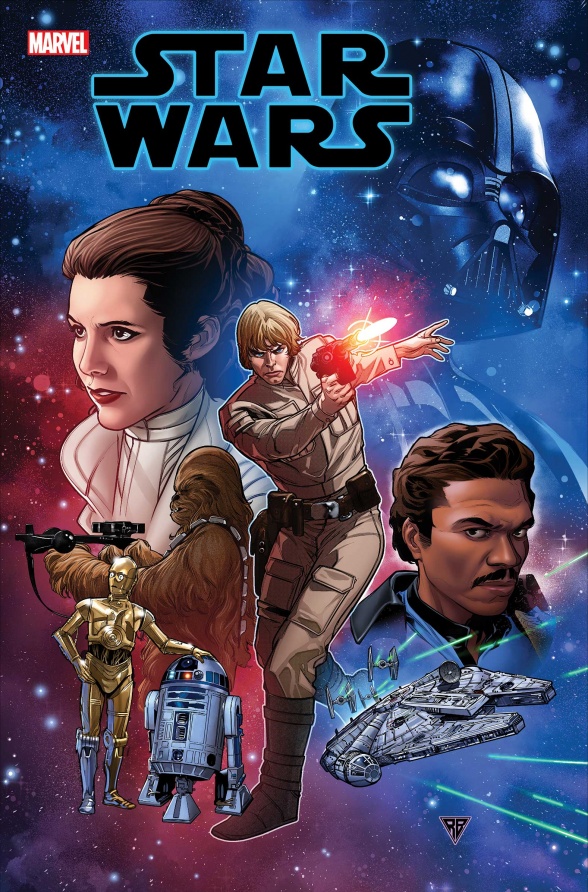 “No…I am your father.” In the wake of the events following The Empire Strikes Back, it is a dark time for the heroes of the Rebellion. The Rebel fleet…scattered following a disastrous defeat at the Battle of Hoth. Han Solo…lost to the bounty hunter, Boba Fett, after being frozen in carbonite. And after being lured into a trap on Cloud City and bested in a vicious lightsaber duel against the evil Darth Vader, Luke Skywalker…learned the horrible truth about his past. Vader did not kill Luke’s father Anakin–Vader is Luke’s father! Now, after narrowly escaping the dark lord’s clutches, and wounded and reeling from the revelation, Luke, Princess Leia, Lando Calrissian, the Wookiee Chewbacca and the droids C-3PO and R2-D2 must fight their way back to the Rebel Alliance—for the fate of the entire galaxy is at stake! After so many losses is victory still possible? But, what Leia, Luke and their rag tag band of freedom fighters do not realize is that they have only traded one Imperial trap for another! Enter the cunning and vengeful Imperial Commander Zahra, at the helm of the Tarkin’s Will! Writer Charles Soule (DARTH VADER) and artist Jesus Saiz (DOCTOR STRANGE) are taking us all to the galaxy far, far away next year! With covers by RB Silva (POWERS OF X)!

One of the issues with Marvel’s Star Wars line thus far is that, at least for the ‘main’ books, it is hard to surprise the readers. Due to the stories taking place between events that we already have seen, you’re somewhat limited by the stories you can tell. That was a problem for the Jason Aaron-penned “Star Wars” series, which took place between A New Hope and The Empire Strikes Back; it’s going to be an even bigger problem for this new volume, as it is taking place in the slim time (canonically six months) between Empire and Return of the Jedi.

For its first two issues, “Star Wars” has given us moments on either side of the ‘epilogue’ of Empire, where we see Luke getting his new hand and Lando and Chewie taking off for Tatooine. Both stories are interesting, but the events of the first issue far outweigh the second, in terms of import and interest.

In “Star Wars” #1, we see the immediate aftermath of the escape from Bespin, with Luke, Leia, Chewie, Lando, and the droids on the Millennium Falcon. Luke is frustrated by his lack of connection to Obi-Wan, devastated by the revelation of Vader as his father, and mourning the loss of Han. Oh, and the dude is down a hand, courtesy of his Space Nazi father. In his turmoil, we see Luke able to, essentially, take out a fleet of TIE fighters with nothing more than his mastery of the Force. 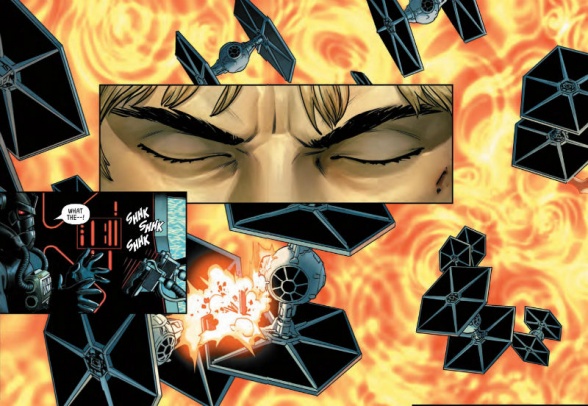 This isn’t supposed to be seen as a good thing; Luke is not in control of his emotions, and he is flirting with the Dark Side here. This is both consistent with Luke’s character and also a big enough deal to allow for some interesting storytelling. When we last see Luke, pre-epilogue, he’s lamenting being lied to be Obi-Wan, able to reach out to both his father and his secret sister through the Force, and very unsure of what exactly his place in the universe is.

This issue doubles down on all of that, allowing for moments of real existential despair for Luke. As a Luke fan, this is really good stuff, even if, much like in A New Hope, Luke seems preternaturally selfish, not realizing how much Leia has lost in the same span of time. But Leia puts her head down and continues to be a fucking boss, where Luke sort of sulks in the corner.

One of the problems that all Star Wars media has to fight against is the total lack of consistency in all things Force. So Luke can take out 10+ TIEs with his mind, but can’t make the Rancor not eat him? Luke can reach out to Leia, someone totally untrained in the Force, but can’t connect with either Yoda or Obi-Wan? I know that there are likely assumed/unspoken reasons for some of this, but it creates a few moments of genuine weirdness. 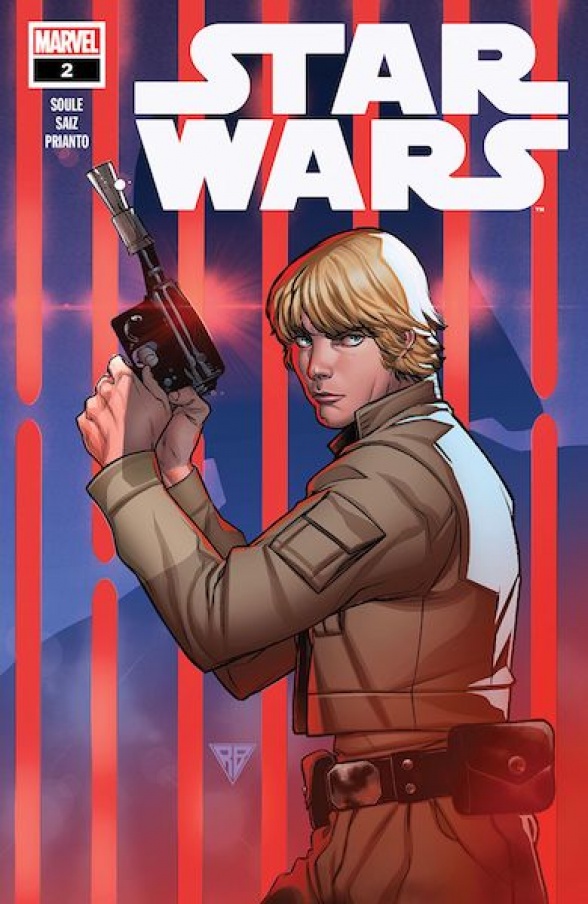 The second issue deals far more with Lando, and what Lando’s deal is. Lando is in shockingly little of Empire, and our opinions on him change at least four times in that span. These issues play out in the space where Lando is a reluctant companion trying to convince everyone that he’s worthy of their trust. That’s a somewhat interesting place to be, story wise, but it’s a bit difficult because you absolutely know that Lando comes through in the end. Unlike Luke’s doubts, which will cause him to become a better Jedi, Lando’s doubts just make you like the ‘hero’ of Death Star II less. I think Charles Soule does a pretty good job at presenting Lando as a guy with good intentions and a golden tongue, talking his way into and out of every situation he finds himself in.

I am interested to see Lando’s role when we get closer to the events of Jedi, in terms of infiltrating Jabba’s palace, but we’re a long way from that right now.

The one really weird element of the book is Lando related. In that aforementioned epilogue, everything seems pretty sunny between Lando, Chewie, Leia, and Luke. Now, obviously, this is a very short scene, but the tone is really one of cooperation and respect. Here, in the comic, everyone is walking on eggshells which, undeniably, is better for storytelling. But it does sort of betray the epilogue, and that’s odd because Marvel/Disney/Lucasfilm still treats the films as, far and way, the most important part of Star Wars, as they should. You rarely see anything even begin to contradict something in the films. Not that this is totally undoing something, but the tone is unusual.

But Lando and Luke are still uneasy with each other, and Lando is proposing a way for he and Luke to each get what they want, which has little to do with what the Rebellion wants or needs. 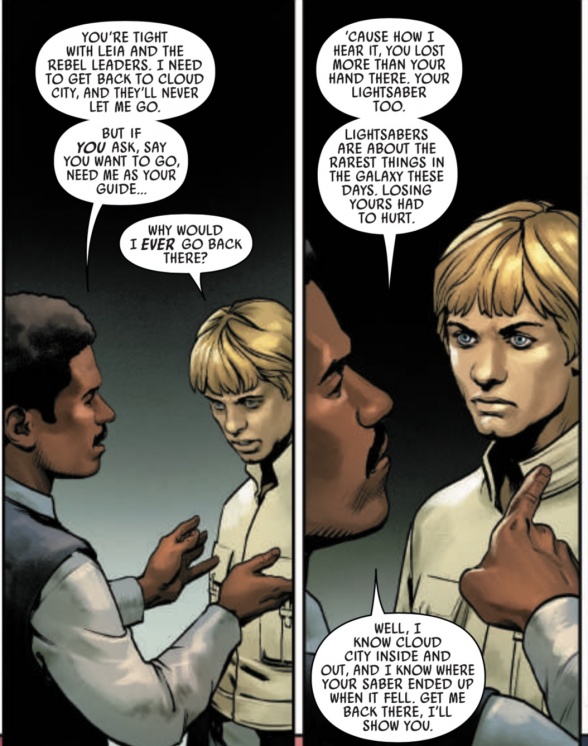 One of the positives of this run thus far has been the art by Jesus Saiz. At times, the first “Star Wars” volume was a trace-a-palooza, with overly photo realistic art that didn’t allow for anything other but exact replicas. Saiz certainly has the look down for each character, and there is no denying who you’re looking at in every panel, but he isn’t as beholden to the facial expressions, thank goodness.

His Lando, especially retains the complexity of Billy Dee Williams’s performance. He’s trying to make everyone, from Jabba to Leia, trust him, and his cockiness is exhibited here with a thin layer of fear and unease, which makes for a really satisfying visual experience. He isn’t trying to recreate the films, but he is sticking close enough to the source material to give people an easy pathway from the films to the comics. I hope he can stretch out a little more soon, but that may be wishful thinking.

– The ‘the Empire can hear all our transmissions!’ was treated exactly like The Last Jedi‘s “they tracked us through hyperspace” revelation. Obviously, the Empire is going to get the upper hand occasionally, but this felt very repetitive.

– We are starting to see the greater integration of Kes and Shara, Poe Dameron’s parents, into the comics. They were a part of the “Shattered Empire” miniseries, and have been seen here and there, but this is the first time we’ve seen them as supporting characters on the ‘flagship’ title.

I can’t imagine that Poe being a spice-runner, as revealed in The Rise of Skywalker was ever a part of the character’s backstory until recently, because being a child of rebels seems like a pretty straight path to being a Resistance pilot, no? The spice runner thing seems like a weird detour for the character, although one that could be interesting if ever explored.

Well, that does it for this month. Join us next month for a look back on the first two “Darth Vader” ongoings, as we prepare for the new Greg Pak-penned “Star Wars: Darth Vader” which begins this week.

Until then, may the Force be with you!


//TAGS | tales from a galaxy far far away

Tales From A Galaxy Far, Far Away: September 2017