Disclaimer: I am not an expert in either science or World War II history; all of the information I will be using in this column is either easily found on the internet or is purely my opinion. 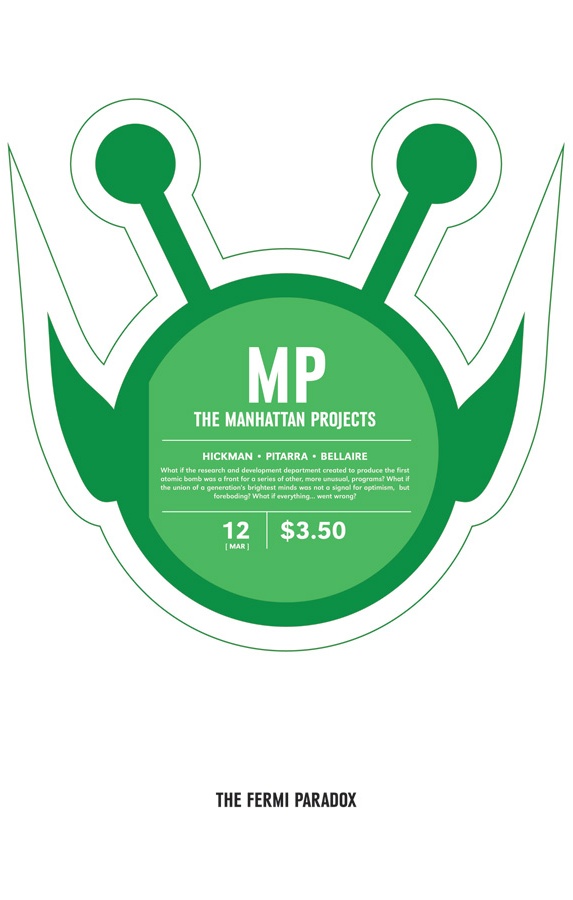 This issue is the second in a row of character-specific issues. Last month focused on Harry, and this month turns its attention to his alien pal Enrico. We also get to hear from Jonathan Hickman and Nick Pitarra about their process on this issue, and we get some exclusive process art from Pitarra.

“Clavis Aurea: the Recorded Feynman” is excerpted three times per issue. The Golden Key (the English translation of the book’s title) deals with those quotes.

This issue’s Clavis Aurea only has one installment, and it is the first time that Clavis Aurea Feynman sounds like “Manhattan Projects” Feynman.

This quote also is reflective of the Fermi drone’s ability to mask his appearance and, for all intents and purposes, get facial reconstruction to appear to be a middle aged Italian man.

No One is What They Seem…

One of the themes of the book is perception versus reality. On a macro level, the public has no idea what is happening in Los Alamos – if anything, they think that these scientists worked on the atomic bomb and have gone back to their lives doing whatever it is scientists do.

On a micro-level, Einstein isn’t Einstein, Fermi is an alien, and Oppenheimer is really his brother. 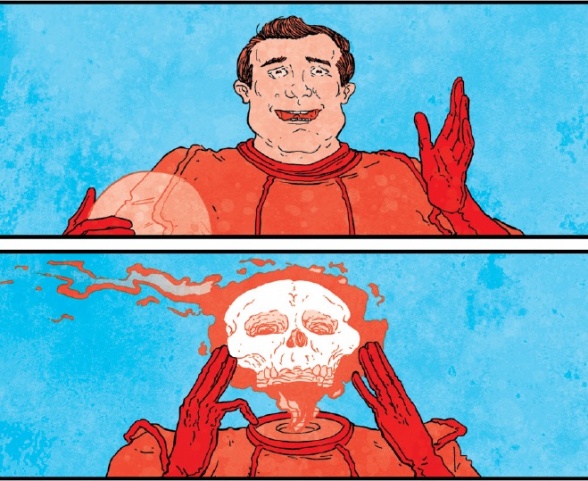 Harry’s story keeps getting worse – not only is the guy irradiated, not only did that fact wipe out an entire race of aliens, and but now his only friend has tried to kill him and destroy everything he spent his life building.

He is also the only person who was happier and better off pre-Projects – but he’s stuck. Unlike Feynman or Groves, who could disappear and get away, Harry is a radioactive skull – this is the only place where he can survive. And so this sweet man, a scientist and not a monster, has been literally transformed into something deadly. Every day, his life gets worse. But what’s he going to do?

This book is frequently funny, but I don’t know if I have ever laughed harder at anything in the book than I did at this panel of the drone meeting (the real) Fermi:

Just imagine that in a thick Italian accent, and tell me that isn’t hilarious.

There is an iconic moment in the minds of my generation’s film consciousness from Terminator 2: Judgment Day, when the T-1000 reassembles himself from a liquid form. I could probably reference that moment here:

Instead, I’d rather link to this clip of The Monster Squad.

With the above image of Harry using his energy to blast an enemy, this book moved the most toward the superhero side of comics that it ever has. One of the fun parts of this book has been that this has always been much more fantastical and out there than its simple-sounding description. Between the alternate realities, aliens, and robot arms, this was always more steeped in comic tropes than a lot of creator-owned titles (those that aren’t obvious superhero analogues).

Personally, I think it’s a lot of fun, and I’m happy to see more of this.

1. Raal isn’t done – and neither are his drones

This isn’t my most daring prediction, but I can’t see Raal just throwing in the towel post-Fermi death. Who is to say that there isn’t already a drone someplace in the Projects as backup?

2. Harry is about to lose his shit

There is only so much a man can take before he bursts, and having your only friend try to kill you is probably pushing it pretty close to the edge. With no options left, and no allies, it doesn’t appear to me that Harry will be the most stable or understanding guy for the next little while.
With Oppenheimer taking control (and pulling away from the others), Harry might be set up to be the opposition voice.

3. Groves is getting comfortable – and that is bad (for him)
Groves, at the outset of the book, seemed like he was suspicious of everything that was going on. Sure, he was recruiting, but he was also thinking that he was above these eggheads. Now, he’s content to let Einstein hack up Fermi with a chainsaw on the moon.

Groves lets Einstein hack up Fermi with a chainsaw on the moon. This isn’t his game anymore – he’s out of his element, and he’s going to eventually realize that. At that point, however, it may be too late.

4. Laika is more important than we realize

Although everyone loves a talking dog, I think it is pretty surprising how Laika has not only stuck around, but gets a gun and is part of the battle. 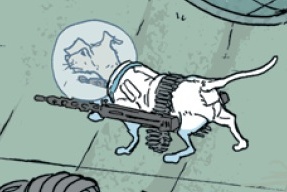 Maybe – just maybe – Fermi wasn’t the only alien in the Projects.

Back in issue #2, the final quote from Clavis Aurea was this:

I’ve been working over this concept ever since it was first introduced, and I think I’ve figured it out.

Issue two (written about here) was the first part of von Braun becoming something more than a man – something different. Since then, more of his body has been swapped out for machine.

Eventually, perhaps, the rocket man will trade in all of his humanity for a consciousness embedded in a rocket – a heavily armed, powerful rocket – that will bring him far away. 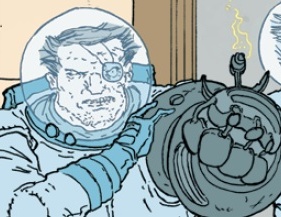 Dispatches From Inside the Projects

This month, it’s all about Fermi.

This issue highlights Enrico Fermi or, rather, the drone appearing as Fermi. Was there something about the real Fermi that screamed “alien” to you, or did you simply decide it would be a fun character to add some alien flavor too?

Jonathan Hickman: Once at college, at an absolutely massive party, me and two of my friends decided to streak through said party. It was at a two-story apartment complex with a completely surrounded courtyard, meaning, structurally, the courtyard was much like the pit of Thunderdome. We streaked, everyone screamed, yelled and pointed, and then we got dressed and rejoined the party. Then we spent the next couple of hours as streaker-deniers walking from group to group asking randoms to describe what these mythological streakers looked like in detail (you can imagine the questions).

I was bored a lot in college.

And I think the Fermi paradox is exactly the kind of maybe-maybe not bullshit an alien incognito would come up with.

This issue was certainly one of the more action heavy of the entire series. Of all the action sequences, which was the most fun to draw? 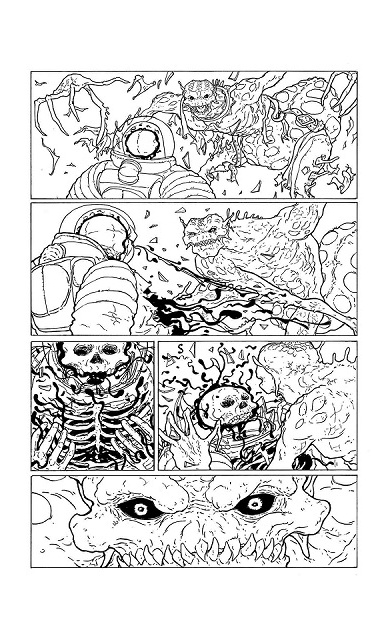 The betrayal of Fermi Vs. Harry at the beginning was cool….and getting to draw Harry all detached in outer space was a fun visual. When Harry gets slashed by Fermi, you can kind of see the betrayal on his face. Plus the setup of the whole buddy themed last issue makes it a fun surprise.

The team fight was cool too…this was the first time I got to draw the whole team fighting together as well, that was a really fun page to draw too. Plus pages like that sell for a bunch of money! (More team fights Jon!) 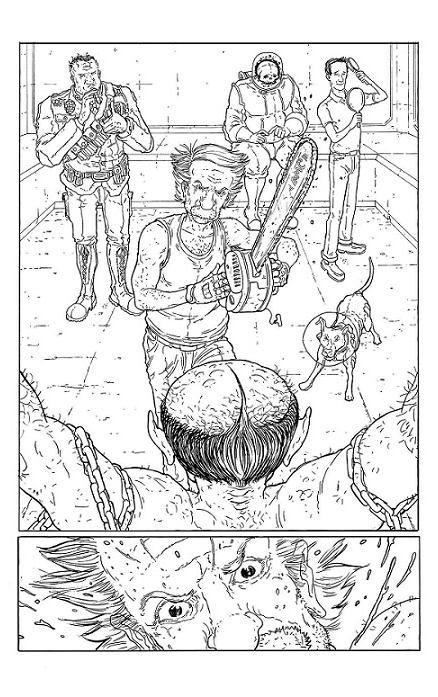 BUT I guess if I had to pick it would be Fermi getting chainsawed by Einstein. Hickman wanted to do something more over the top than what I had in mind (it’s usually reverse). I originally wanted Harry to go up and say sorry to Fermi…about how things ended up and what the team was going to have to do (kill Fermi). I wanted Harry to irradiate him with a good bye hug. I pitched it to Jon and he said , “No. Lets have Einstein kill him with a chainsaw!” The ending worked so much better , plus it plays into a scene or two in the next issue. I like how nonchalant Groves is lighting his cigar, self absorbed Feynman is checking himself out in his mirror, and how depressed Harry is in the BG. I got to squeeze in some really fun character stuff framing probably the coolest scene ever…chainsaw wielding Einstein!

#13 teases the beginnings of some cracks forming after 10 years of building peace and progress in the projects. Like I said before – don’t be surprised to see Harry pulling some of those threads that unravel the sweater that is the Projects.

See you next month, and make sure to leave any theories, opinions, or criticisms in the comments!