Disclaimer: I am not an expert in either science or history; all of the information I will be using in this column is either easily found on the internet or is purely my opinion. 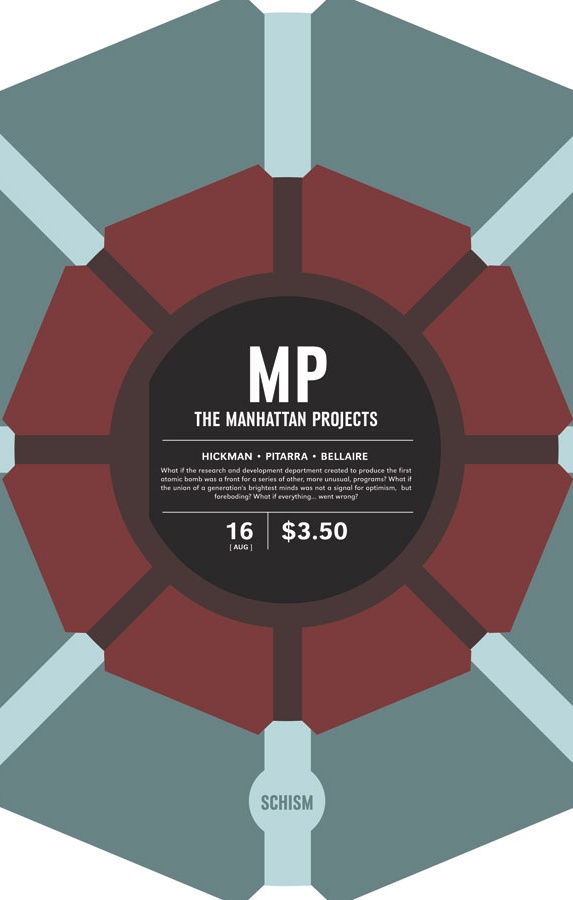 After last issue’s betrayal, we see our boys sweating for only the second real time in the series (the other time was when the FDR: AI tried to take over), as they attempt to escape for the clutches of Westmoreland and Oppenheimer.

“Clavis Aurea: the Recorded Feynman” is excerpted three times per issue. The Golden Key (the English translation of the book’s title) deals with those quotes.

“Project Vulcan fed into Project Charon. In retrospect, it was born from ruin.”

If you recall from issue #11, Project Vulcan is an energy project, which was under the purview of Groves and Ustinov. This is the first of two very similar quotes, basically illustrating how the interconnectivity of the projects was one of its downfalls. 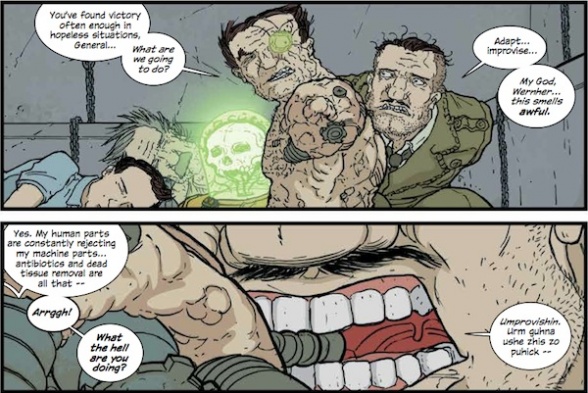 Way back in the second ever installment of this column, I began hypothesizing about something in “Clavis Aurea” that dealt with von Braun. It said:

Since then, von Braun’s body has been failing him, getting blown off and, now, rejecting its mechanical parts. Even if my past projection doesn’t come true (that von Braun’s body would eventually die, and his consciousness, or brain, would travel the universe after his “death”), it appears that his body is not long for this world.

Also, all week I’ve been singing the old folk song “John Brown’s Body” with the lyrics “von Braun’s body,” because this was the first section I wrote. Welcome inside my mind.

Let’s pause for a moment and take a look at the brilliance that is having Einstein naming his chainsaw after his most famous discovery.

“Project Gaia fed into Project Charon. In retrospect, it was born from ruin.”

Gaia is the project that Einstein and Feynman were working on, cataloging the various species of the universe. Again, the interdependence of these endeavors has led to their downfall.

In issue 10, inside of Oppenheimer’s brain, we saw the first of the other victims he had eaten pop up (his brother, a horse, etc), and this month, we get another: Truman. The interesting part of this, is that instead of assimilating into the mindset of its master, the victims still are very much their own people, with their established personalities intact. Here we get Truman in his Mason gear, still doubting the Projects, still driving Oppenheimer nuts.

It seems that the door that Einstein assembled, which allows them to travel the universe, has a time lock on it, and after 8 hours, the door opens unless tended to. Well, 8 hours is up – and it appears they have a visitor.

“Project Ares existed outside of Project Charon. In retrospect, it save us all.”

Could this mean – oh, God I hope so – that Laika will save the day? More on this in a bit. 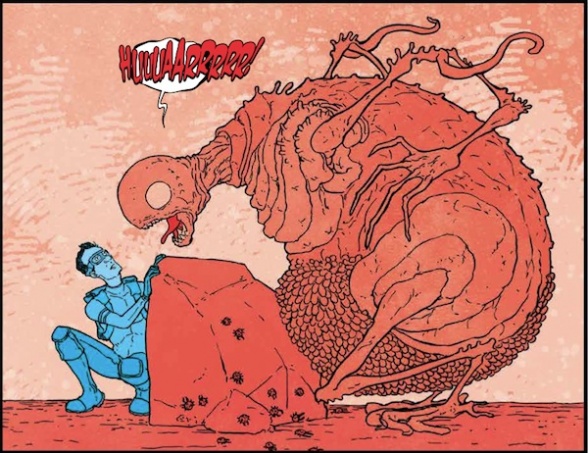 The Hut-Grabere is the name of the creature Feynman and Einstein are tracking in the flashback sequences, who sends out a swarm ahead of its main body. Many times, Hickman will sneak meaning into the names he gives people/projects. However, the only real instance of “Grabere” I found online was a small mountain peak in France. However, let’s really play bullshit artist here.

With further digging, the name has German origins, and is often spelled without the final “e.” It first appeared in Austria, where:

in ancient times the Graber family played a significant role within the region’s feudal society. The name Grabner became prominent in local affairs and often intermarried with other distinguished families, some of whom played important roles in the territorial conflicts of the era.”

Hut, on the other hand, is an English name, with Anglo Saxon roots, and indicated one who made hoods.

Together, the Hut-Grabere are a hooded (mysterious) creature that will play a large role in the feudal politics of the universe. It’s a stretch, but fun, no?

2) Groves as the sacrificial lamb

Groves is truly the soldier here – helping out his fellow soldier von Braunn by trying to pull out the metal his body is rejecting with his teeth, and taking the fall for the entire crew here. Sure, Groves is involved, but he’s not a genius, and probably has the least amount of useful information of any of these scientists. But everyone knows the drill – the soldier can take it. Let him fall on his sword.

But what if there is more at play here. Groves knows Westmoreland, and he hand selected Oppenheimer. Could he be given up as the sacrifice because he has a plan after all? Maybe in doing his research on Oppenheimer, or during his time with Westmoreland, he was about to glean some information that could bring them down? 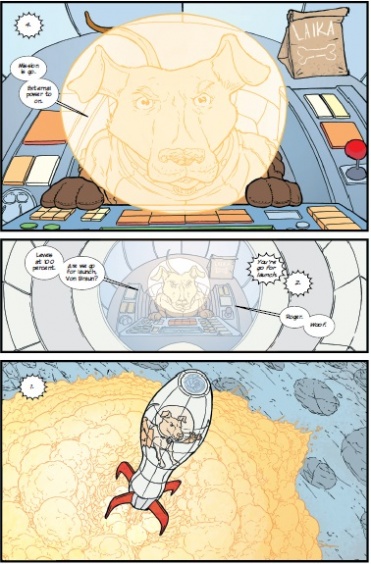 As teased before, Project Ares is implied to be the salvation of the scientists. Ares involves rockets, and was mainly under the control of Gagarin and von Braun, both of whom are currently locked up. But the third member of their party, Laika, had already been sent off to the stars. Could Laika return with help?

I like to imagine an image similar to this one from last issue, Laika riding on the back of an alien, to save her Yuri.

Piranhas are a great metaphor for the scientists’ captors – they have a scary reputation, and are dangerous, but are nowhere near the threat they are supposed to pose. Hell, Westmoreland more or less says so in this issue. In fact, piranhas, while still dangerous, are eaten by humans far more than they eat them.

Is Westmoreland the piranha here – by reputation a true threat, but will more than likely wind up as simply another course for Oppenheimer? Will the scientists ever trust him again?

5) “The Serious Business of Playing God”

Feynman can’t wait to get to the “serious business of playing God” – and who can blame him? The entire purpose of project Gaia is to use alien physiology to make human life superior to its current state – to quote Daft Punk, “harder, better, faster, stronger.”

But what if they already started that plan?

The book begins during World War II, and here were are in the 60s, and no one’s aged a day. Could the scientists have already been working on small lifehacks to keep their figures/wrinkle-free faces/non-grey hair. A man as vain as Feynman would consider this of the highest priority, and could probably do more for this in his spare time, given the resources, than most geniuses could in a lifetime.

Could Gaia have been started, secretly, years ago?

Dispatches from Inside the Projects

Late last month saw the release of the first volume of Hickman’s “Fantastic Four” omnibus, and that is what inspired my question this month. 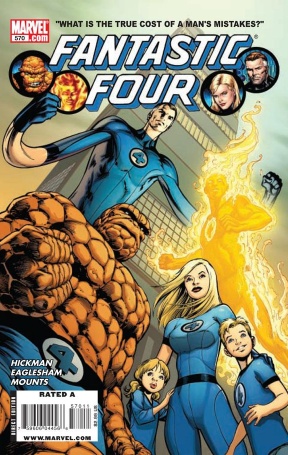 I just re-read the first half of your “Fantastic Four” run in the newly released omnibus, and I was struck by how your Reed Richards is basically the antithesis of “The Manhattan Projects” – a man incapable of selling himself, his brain, or his family and friends out for any reason whatsoever. Now that you’ve written the men of the projects for some time, what are the similarities/differences in writing brilliant men both with, and without, a moral compass?

Jonathan Hickman: I wish this was a more complicated answer, but given the choice between order and chaos, or in this case, rules and no rules…I’ll almost always choose no rules.

Reed almost operates within the parameters of him doing the ‘greater good’ — even if he ends up being wrong (which is the trick at writing a cool Reed-centric “Fantastic Four” story), what he did was for the right reasons.

The majority of the characters in the Manhattan Projects just do things. Sometimes this is because they’re up to evil, or mischievous, or sometimes they are just in a mood. Which basically means I’m in the mood.

Which is a place I tend to frequent.

Next month is titled “Unholy Alignment,” and promises the four distinct projects coming head to head. It doesn’t look like it’ll be all that good for anyone.

In all honestly, when I first read this issue, it felt a little slight, plot wise, compared to other installments. However, digging in to this issue revealed all sorts of great little surprises. And, it certainly has me excited for next month!

As always, tell me how crazy I am, or share you own theories in the comments below!

Thanks for reading, and see you next month.