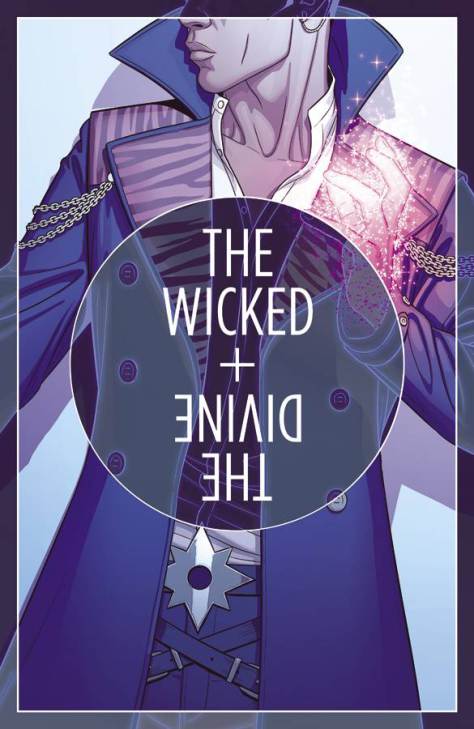 Welcome back to another edition of Wicked Intervention, Multiversity Comic’s monthly annotations for Image’s “The Wicked + The Divine”. This column is late due to my life going even more downhill than last time. All questions and complaints can be forwarded to my Tumblr. Now that the apologies are out of the way, let’s talk WicDiv #12. Spoilers ahead!

This issue is the start of a new shift in tone for the next few issues of “The Wicked + The Divine”, one where guest artists tackle an issue each while Jamie McKelvie goes to draw a comic book series from 2010. I’m debating whether or not to write a column for “Phonogram” because it seems like such a more personal series than WicDiv is. And also less contemporary. I can be like “Yeah, that character’s just Grimes in a wig” because I know Grimes and I know modern pop culture. “Phonogram” is kind of meant for readers who were around when the music it was based on was happening. Hell, last year at New York Comic-Con, Gillen swatted a copy of “Rue Britannia” out of my sixteen year old brother’s hand and replaced it with “Singles Club” because at least there was a chance he knows who The Knife are. Unless “Immaterial Girl” is all about folk punk, I may not be qualified to write about it. That said, call me when the pop punk phonomancers show up. I am definitely qualified to write about that. Or ska phonomancers. Phonoskancers, if you will.

As mentioned before I took a deep tangent into pop punk country, McKelvie has been replaced this issue by Fightin’ Kate Brown, a great artist Team Phonogram fans might recognize from “Young Avengers” #6, the issue where Prodigy and Speed didn’t make out. Her work here is more than welcome because 1) she’s seriously great and 2) she’s just a little less glamorous than McKelvie’s work. That’s not to say one artist is better than the other, but Brown is certainly more messy in a purposeful way. Not everyone looks like they were ripped off the cover of Vanity Fair you know? If the purpose of this upcoming arc is to look at the Pantheon from the eyes of various outsiders, then that’s just a smart way to express the various viewpoints going on. When you’re in the thick of it all like Laura was, everything can feel like its gorgeous and made out of cocaine. Everyone’s a freaking god, you know? Here, through the lens of a skeptic, everyone’s just a bit more dorkier. Human, some might say. Also, just saying, probably the most badass fight scene in the whole series is in this issue. 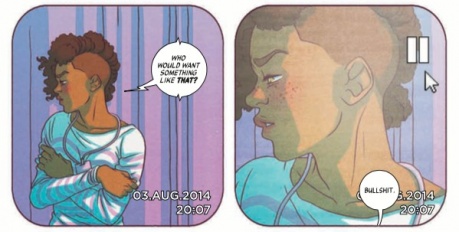 Last time on WicDiv, everyone died. Womp womp. Specifically, Ananke revealed that she was (probably) behind the conspiracy that resulted in Luci’s death and subsequently killed Laura. She also sent Baphomet to kill Inanna and has let him take the blame for killing Laura and her parents as well. Basically, my theory about Ananke being the Lucille Bluth of WicDiv turned out to be right. Baphomet is still GOB, Inanna is Tobias, and Woden is, uh, Bob Loblaw. Why not.

With Cassandra off playing god, her ex-intern Beth has taken the role of surly skeptic. Fans might remember Beth from when Cass’s intern alerted Baal to her meeting with Laura. She’s kind of like Cassandra, from the look to having two cronies, so it’s possible that she was a big fan of Cassandra before she sold out and become Urdr. Either way, her willingness to sell out to Baal shows that she might be just a bit more hands on than Cassandra. Laura would be like “Cass we have a murder to solve” and she’d be like “UGH WHATEVER FINE!” while Beth straight up nabs Baal and is like “MORRIGAN! NOW!” 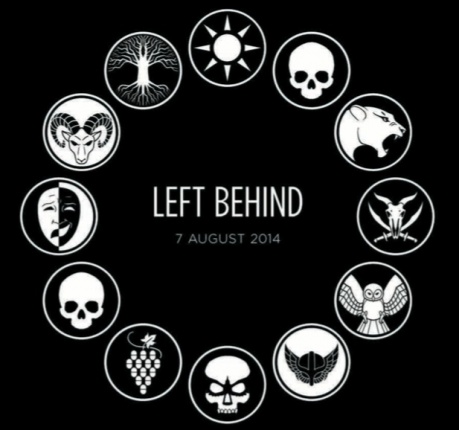 Left Behind is the best movie on Netflix. You know The Leftovers? Imagine that, but with Nicolas Cage screaming on a plane for two hours. You’re welcome. Sorry, what’s this column about again? 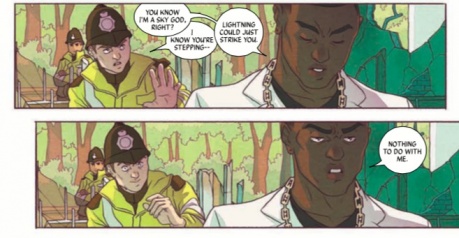 To no one’s surprise, Baal took the events of ‘Fandemonium’ the hardest and is searching for Laura and Inanna’s killer on his own, paying his respects to Laura and her family on a daily basis. Considering he’s more or less shown a full trust in Ananke, acting one of her enforcer’s during Baphomet’s attack in issue #10, it’s not likely he’ll get far. Say what you will about Ananke, but she did a great job of setting her charges against each other.

Also, Beth using Twitter to get in touch with Baphomet is something Cass would likely never do. She’d probably go off and write an angry blog post. If Cass is representative of “old” media circa late 2000’s early 2010’s, Beth is emblematic of DIY journalism and social media. She’s the Buzzfeed to Cass’s Gawker. Also in this scenario, Cass is getting sued by Hulk Hogan. 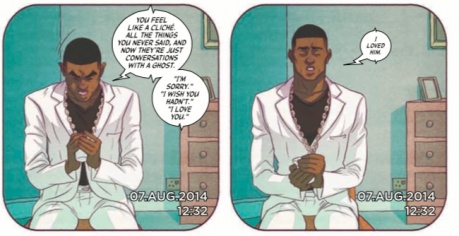 Aww, poor Baal. The two major casualties from “Fandemonium” were this boy he just said he’s in love with and a one night stand(?) so of course it’s hitting him harder than, say, Sakhmet. I don’t think anything really gets to her. This moment’s also interesting to note in relation to the rumors surrounding Inanna and Baal’s ex-boyfriend. Now, it just seems like that was a way for Inanna to get at Baal. Either way, Baal’s furious that he lost his Bael. 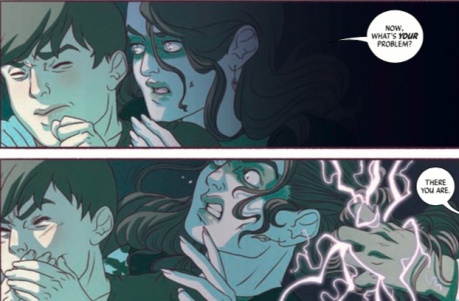 How to Use Negative Space 101

Also, Morrigan calls Beth “Almost-God Almost-Dead”. What? Unless there’s Laura and Inanna’s “deaths” have opened up a spot in the Pantheon, how could Beth be considered for a shot at godhood? As has been mentioned before, Aanke’s rules for godhood are super suspect so it’s likely that anyone could have the chance to be the god if they believe or have some connection to the Pantheon. It’s just a matter of Ananke pointing at you and going “Yeah, alright, you’re going over.” At this point, it’s becoming more and more likely that the twelve gods are just Ananke’s own system. Heck, she’s the only one left over from the first Pantheons. Maybe she’s the person who made those rules in the first place.

Random thought: I’ve been playing a lot of Dragon Age lately so all this talk of Cassandras and Morrigans keeps making me think my Warden and Inquisitor’s girlfriends are going to show up and punch out Baphomet. Ananke’s going to reveal she’s a Tevinter magister and Inanna’s going to ride the Bull.

And here’s your best page of the issue. I love McKelvie but truly adore the rawness Brown brought into this fight, especially as Baal cries fire over Inanna. If his bodily fluids are made of flame, does that mean he literally spit fire? Also of note, Morrigan breaking her verse to say she doesn’t know where Baphomet is. If that was an act, who was it for?

Woden to the rescue? Having him becoming the asshole voice of reason is a pretty good development for the character. He’s that guy who has a lot of good points and is super helpful but then he’ll say something about Asians and you kind of just involuntarily shrivel away. Also interesting to note that he and Baal are taking Morrigan home to interrogate her. Is Ananke going to help her with that? Is she going to do the Lucille wink at her?

Also, props for the heat-vision portal. Woden’s “magic” is all based on technology so seeing that visually represented is super neat. 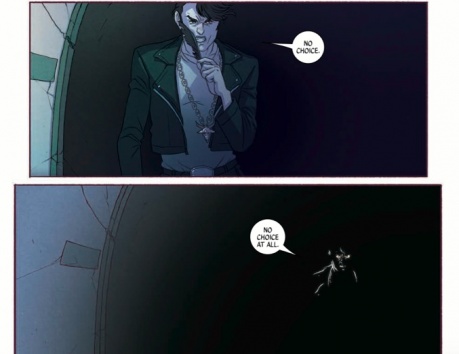 Welp, looks like Evil Baphomet Head more or less took over Baphomet. God, it’s like he just has this huge thorn in his side. What’s that? The next title page is based off The Smith’s “The Queen is Dead”? The one with “The Boy with the Thorn In His Side”? The one that goes like this?

Yeah that probably has to relate to Baphomet. I like to “Bigmouth Strikes Again” describes him pretty well too.

Well that’s it for Wicked Intervention. We’ll see you again next month wh- 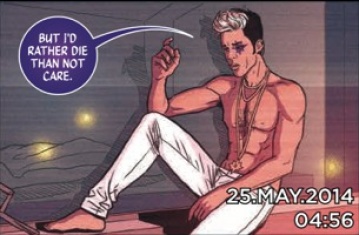 Oh hey! Inanna’s alive! Wait… no. This is from three months before ‘Fandemonium’ ended. Womp womp.

I thought this interview was conducted by Beth at first but it just seems to be some new redheaded journalist. You have to imagine that every journalist is covering the Pantheon to some extent. Pitchfork has like twenty articles about the “texture” of Tara’s latest record or whatever. Either way, this scene was a great portrait of Inanna’s character and it’ll be exciting to see more portraits of characters. I hope that guy who ran Ragnarock gets an interview. He’s the Oscar Bluth of WicDiv. 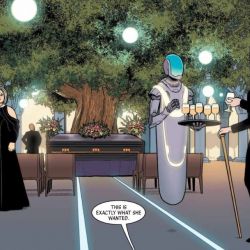 Wicked Intervention: “The Wicked + The Divine” #45

Once again we return, one last time. Welcome back to “Wicked Intervention” your page by page deep dive into “The Wicked + The Divine.”And this is truly the end of the road. The last issue. We’re done. I have to imagine if you’re reading a detailed breakdown of the final issue of a series well… […] 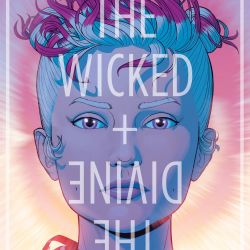 Wicked Intervention: “The Wicked + The Divine” #44

Once again we return! Welcome back to “Wicked Intervention” your page by page deep dive into “The Wicked + The Divine.” This is it friends. The end of the story, but not the end of the road. Let’s go page by page, and savor what we’ve got left. Then we’ll come back together one last […] 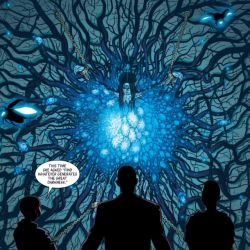 Wicked Intervention: “The Wicked + The Divine” #42

#WicDivOnce again we return! Welcome back to “Wicked Intervention” your page by page deep dive into “The Wicked + The Divine.” Only a few issues left now, but join me in my deep analysis of every page and image in every issue of ‘Okay.’Cover: I guess in showcasing the characters who haven’t gotten their own […]