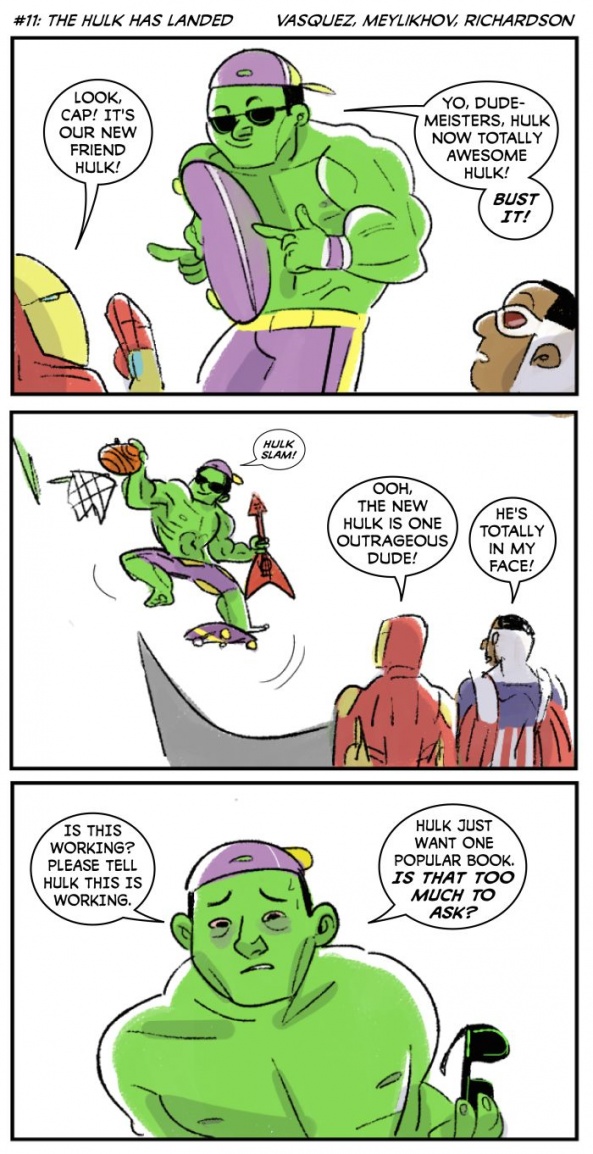 Marvel’s got a whole mess of relaunches coming our way, and noticeably among them is the Totally Awesome Hulk, a relaunch of the franchise written by Greg Pak and Frank Cho featuring a brand new, totally awesome Hulk. Relaunching a franchise with a new hero in the main character’s old tights is often a desperate attempt to boost low sales, but as fans of Pak’s past Hulk run we won’t let them treat the Totally Awesome Hulk like dirt anymore just because he’s the new guy.

Andrea Vásquez is a young artist from Chile, and is much more talented than both Matt and Walt. You can see her work on DeviantArt or one of two Tumblrs.

Matthew Meylikhov and Walter Richardson used to make bad jokes in Weekend Week in Review. Now they make them in Back Issues.

Andrea Vásquez is a young artist from Chile, and is the incredibly talented artist providing life to Back Issues. You can see her work on DeviantArt or one of two Tumblrs.

Back Issues #12: The Consequences of Furiosa

It has been two months since the release of Mad Max: Fury Road, and still the love for Furiosa has hardly ebbed. And who’s surprised? Charlize Theron was an essential part of the exhilarating action flick, and totally stole the show from the supposed lead, Tom Hardy. But with all the fanart from otherwise professional […]

DC’s got a lot going on right now, what with a soft-relaunch post-“Convergence” and ‘The Darkseid War’ ramping up in the pages of Geoff Johns’ “Justice League” series. But all that said, this month neither Darkseid nor the Anti-Monitor particularly seem like the most nefarious villain running rampant in the pages of DC Comics right […]

Back Issues #9: The New Face of Marvel

It’s the moment you have all been waiting for: Back Issues is back!…I’m sorry, I must be losing my hearing, because I can’t hear the resounding applause.For those of you who haven’t been reading Multiversity Comics for years (and for those of you who simply forgot us), Back Issues was a short-lived webcomic co-written by […]