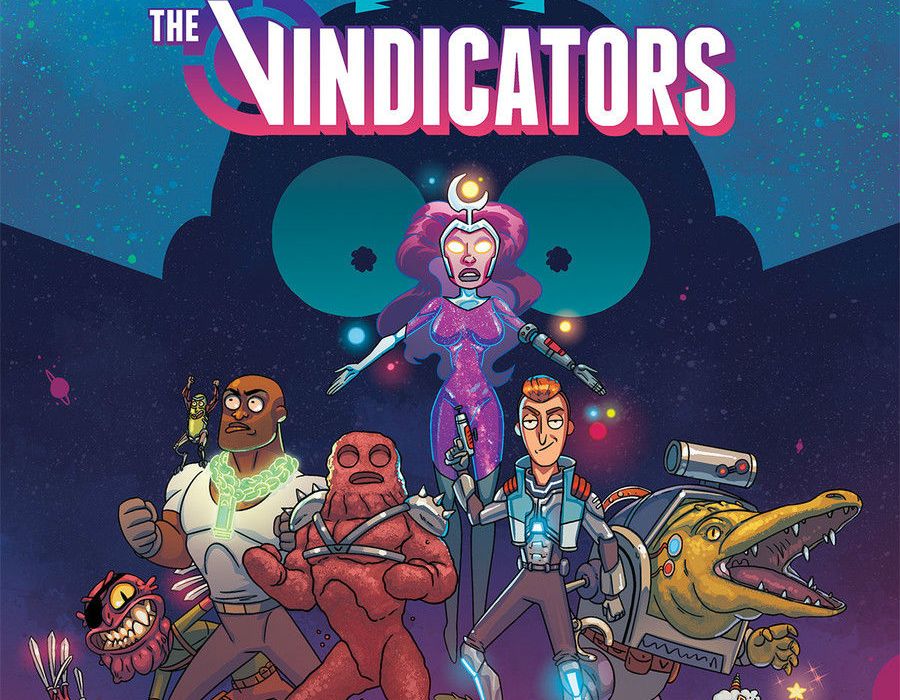 The “Rick and Morty” comics have started doing new “Rick and Morty Presents” one-shots, focusing on different groups and characters from the cartoon series. It begins with a look at “The Vindicators,” and it’s only fitting that the first comic in this series looks at the show’s take on comic book superheroes. 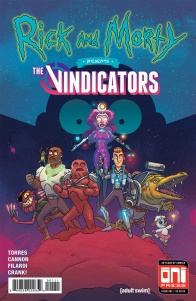 Learn the secret stories and hidden pasts of your favorite Rick and Morty characters in Oni Press’s new quarterly series of one-shots: RICK AND MORTY™ PRESENTS! In this first issue, J. Torres (Teen Titans Go!, The Mighty Zodiac) teams up with Rick and Morty™ series artist CJ Cannon to explore the twisted and bombastic history of THE VINDICATORS in an all-out superhero comics extravaganza. Read in amazement as the superhero team travels through dimensions to recruit other heroes to defeat a villain of their own making. Gasp in shock and awe as the plot twists and previously irrelevant characters revive from the dead! Frown in frustration as you forget the complicated backstory of suddenly important mythic items! And most of all… WUBBA LUBBA DUB DUB!

In the Rick and Morty cartoon, the Vindicators were a superhero group that Rick systematically destroyed – – either through his traps or their own failings, all while blackout drunk. It was a hilarious episode, but it did leave us wondering about The Vindicators, and their previous adventure with Rick and Morty.

This comic does not give us any answers to that, as it continues the story from after the episode. In doing so, it allows the characters to poke fun at every single comic book trope and cliche imaginable. Those of you who watched the show might be thinking, “Wait a second, didn’t The Vindicators all die or go past the moral horizon?” And you’d be right. But this is a comic, so they just got rebooted as “The All-New, All-Different Vindicators,” an obvious nod to Marvel’s “All-New, All-Different Avengers.” That was the first sign that this was a comic that knew all the comic tropes to mock.

And boy, does it ever. “Rick and Morty Presents: The Vindicators” touches on every single comic book idea it can. Extra pouches on costumes, the revolving door afterlife, reboots, “Suicide Squad,” crossovers, event fatigue, Ryan Reynolds, the list goes on! Hardly a page goes by without some sort of quick reference to or shot at comics, and it’s clear that in spite of the mockery, the love for comics is there.

Of course, this is a comic based off a show not known for being subtle with its innuendos and violence. As such, when it gets to the comic equivalent of the Infinity Stones, we get Infinity Balls, and all the ball jokes you can imagine that would come with it. Yet it carries on the joke just long enough to reach the point where it becomes funny again.

Similarly, as much as “The Vindicators” pays tribute to comic book characters and teams, so does it delve into the Rick and Morty canon. It takes a trip through the show’s history, bringing back the Death Stalkers, Scary Terry, the parasites, and even Pickle Rick. Anyone who enjoys the show will love all the callbacks and shout-outs the comic makes to its original source, which perhaps is another nod to how comics can get caught up in their own continuity. Or perhaps I’m overthinking it, and J. Torres just wanted to cram in a lot of references to the show. That’s a distinct possibility as well.

Speaking of Pickle Rick, the version shown in this comic is basically a murderous vegetable in a rat suit that only says “Pickle Rick!” rather than Rick’s brain in a pickle body. It could be because all fans seem to care about is the catchphrase “I’m Pickle Rick!” or it could be another nod to the nature of comics, or it could be that I’m overthinking things again. Still, we get more humorous comic references from it, including shout-outs to “The Flash” and his Speed Force, and Wolverine’s catchphrase. Regardless of the reason, it works, and it’s amusing.

Of course, as an adaptation of a cartoon, the art plays an important role. CJ Cannon is a good choice for the artist, as he manages to capture the character designs and general look quite well. The redesigns for The Vindicators all do a fine job taking the original designs and giving them a “comic book soft reboot” style upgrade, and he does a good job with all the distinct character designs (especially considering one is a cyborg crocodile and another is a million ants).

Without the characters being as animated as their cartoon counterparts, there’s a few things in their expressions and motions that get just a little lost, but overall Cannon has the general artistic style of the Rick and Morty down. Similarly, colorist Nick Filardi has captured the cartoon colors and shading nicely. It uses the same flatness as the animated show, but with just enough extra in the way of shades and light to make it pop and stand on its own. When there’s a dramatic lighting source, his work looks particularly nice, adding a proper flair to the scene.

It’s not just enough to copy the look of the show, though, it’s also important to bring something new to the table. In that regard, CJ Cannon still does good work. We get some nice angles to his art, especially during climactic moments, with upward shots and ominous lighting (in large part made impressive by Nick Filardi’s color work), and I particularly like the subtle shifts in layout and lighting we get when the characters jump from dimension to dimension.

Between all the jokes, references, and callbacks to previous Rick and Morty episodes, “The Vindicators” still manages to create an enjoyable plot. There’s action, senseless deaths, plot twists (that Rick saw coming, of course), and a climactic action scene that brings out Rick’s greatest enemies from across the series. All the while, it combines jokes and intense action in a way that shows love to both the cartoon and comics in general.

Overall, “Rick and Morty Presents: The Vindicators” is exactly what one would expect from a “Rick and Morty” comic. It’s both crude and clever, mocking but affectionate, and does a fine job capturing the overall look and feel of the cartoon. Comic fans will enjoy the constant nods to everything in the world of comics, and Rick and Morty fans will enjoy the frequent callbacks to earlier moments in the show. It’s not a groundbreaking comic, but it’s enjoyable for what it is.

Final Verdict: 6.9 – Enjoyable, clever, and a mocking love letter to comic books and the show. All in all, just what you’d want from a “Rick and Morty” comic about The Vindicators.