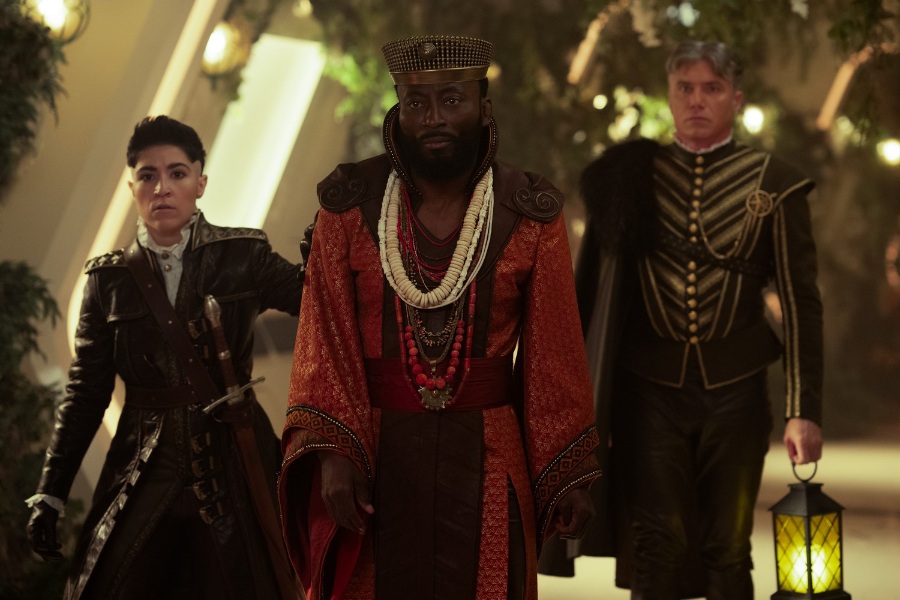 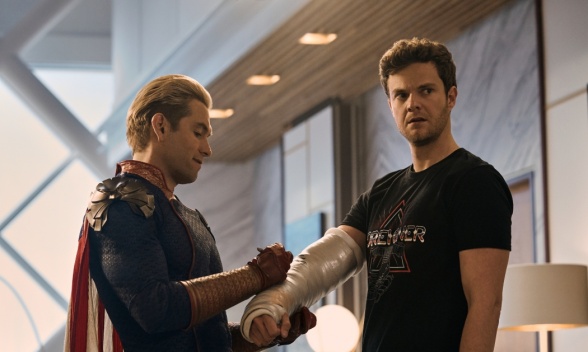 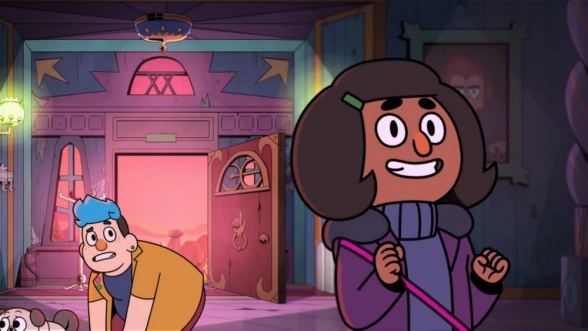 Read our full review of the series premiere by Elias Rosner. 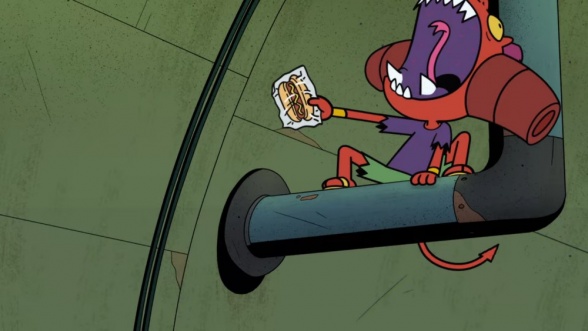 If there’s something off, in your theme park. Who you gonna call? Ghost Pugsly!

Following up on a solid introduction episode, “The Tunnel” expands the cast and begins to build the world in true, giving us a true tour rather than an abridged sneak peak. Basically, if “The Job” felt like the pilot (which it almost certainly was,) then “The Tunnel” is the first real test of the show’s longevity and tone going forward. I’m happy to report that not only does the show have the chops to sustain a long-term arc but it also does one-offs really well.

I should get my one gripe out of the way first. I think the episode was a little overstuffed and under focused when it came to Barney’s tensions with Pugsly. There are a couple competing emotional conflicts that don’t quite resolve, like with Barney continually forgetting about Pugsly as he crushed on Logan. It’s true that this is tied into his lack of internalizing the new dynamic between the two of them but it still felt odd and a bit rushed. I also think that, while the friction between Pugsly and Barney is well-handled, it came a little early.

Barney realizing that he was doing to Pugsly what his Nana is doing to him with regards to his transition – denying his current identity by insisting he revert back to who he once was – is a great way to have a multi-layered conflict that is uniquely his own. I get why it happened here; it was narratively necessary and they didn’t want to drag things out, but I’d have liked to have at least one more episode. It was a hair too on the nose coming right after an episode where the specter of Nana loomed large and would have benefitted from the distance.

Otherwise, “The Tunnel” is so much fun from top to bottom. It’s a twist on the zombie formula, with old mascots coming back to life thanks to Pugsly’s Temeluchus powers and terrorizing the park goers before the crew realizes all they want to do is their jobs: meet and greets. I can tell you right now the episode would not have worked as well were it not for the comedic timing of Steele and the writing & animation team. A+ work all around for the liveliness of everyone.

This episode actually felt the most like a Gravity Falls episode: charming cast, fun, slightly horrific adventures, and just the right amount of wacky. I love that we’re getting to meet Logan and Badiyah and even Josh this early. My favorite part of the episode though has to be every time Courtney eats something. The sound effects. The mouth gaping open. Pure gold and just a touch frightening.

Speaking of, I’m curious what Courtney’s ultimate plan is here. We don’t get much about her and she feels like a wild card at the moment, which is a fun dynamic to have. I hope we get some more focus on Norma next week. She had her moments but this was much more a Barney episode. 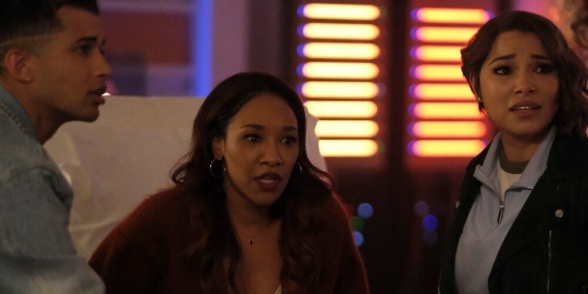 So many things happened in this first part of the season finale; let’s try to remember all. If I understood correctly, bad Deon is not the Deon that we knew, instead he is the Negative Still Force, and along with him, came the other two Negative Sage and Strength Forces. They have a plan to stop to Flash and rule the world.

Meanwhile, Caitlin and Blain are still trying to revive Frost, Cecile is trying to understand how she is leveling up her powers, which now include stealing from other metas like Telepathy and the ability to produce vertigo, making her possibly one of the biggest metas in all of Central City, Iris’ time sickness was caused by the Negative Forces and Barry is training Fast Track, the newest speedster, but she feels pressured because this is a dream she didn’t have.

Barry comes up with an incredibly bad idea: let’s power up Eobard Thawne and in the final fight, it backfires. Evil Deon appears with Iris in front of Barry’s lightning, which apparently kills her as she becomes Still particles, which are then absorbed by Thawne and he starts to transform, ripping off his face and he becomes Thawne with Wells’ face. So the main villain is Reverse Flash yet again.

This whole episode feels rushed. A ton of things happened but they introduced concepts that other times takes weeks to properly introduce and present to us. Ideas than I might like, like Fast Track, end up being relegated behind a repeated storyline: Reverse Flash is back, again. I hope she survives this finale, so we can see her being a hero on her own right. – Ramon Piña

Read our full review of the season finale by Brian Salvatore. 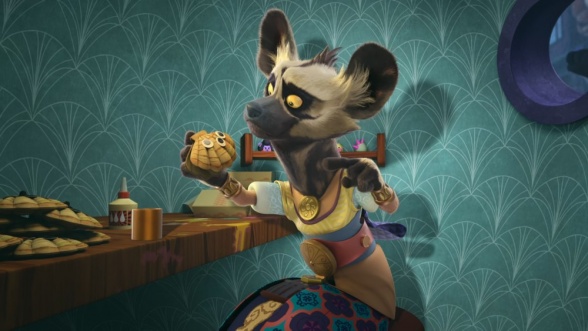 Yeah…this was a dull episode. Perhaps the least amount happened over the course of its 24 minutes and that’s saying something. You know how I thought Kagehito had won at the end of the last episode? Nah. He spends the WHOLE EPISODE exchanging pew pew lasers with Tetsujin and fighting the crew. There are a few fun set pieces and a couple one-liners that were enjoyable but mostly this episode was a slog. Not even Lord Kogane’s triumphant reappearance could save things! Auntie joining up with Gen, Kitsune, & Chizu was another good development even if it was wasted on a fight that left her defeated.

What gets me the most about this episode is how convoluted it is. This is the second to last episode of the season! Let things reach a climax instead of sputtering about. Even the “threads converging” aspect goes nowhere. You remember the Bat Squadron? Yeah, they come back just to have their butt kicked by Usagi & Chikabuma. The Neko Ninja? They clean the floor with the crew before Usagi drops in to save the day in one of the most galling parts of the episode and then Fuwa nopes out at seeing Kagehito.

The absolute worst part is when we find out that Kagehito was being mind controlled by The Clavis. It’s a cheap ploy and the reveal of an even bigger bad behind the big bad falls flat, mostly because the big bad wasn’t interesting in the first place and none of the interstitial antagonists were either. It’s bad storytelling, raising the stakes artificially to try and make the finale episode feel bigger than it otherwise would’ve.

My biggest question is why did this have to happen? Why was this episode so slow and drawn out and why did they choose to make THIS the second to last episode? Why weren’t we more focused on Kagehito and learning more about him, his connection to Miyamoto Usagi, and this greater threat that’s supposedly behind him? Why did the show waste so much time on slow fights and diversions? I dunno. 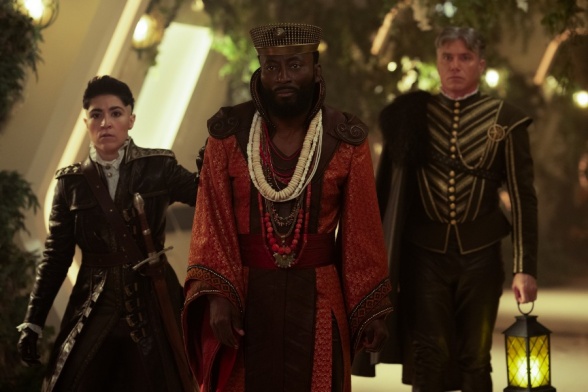 Episode eight of Strange New Worlds continues the long-standing tradition of putting out Starfleet heroes in period costumes and having them live out a fantasy story that needs to come to a specific conclusion to release them from its clutches, or unintentionally dangerous parameters.

This week’s adventure has an ethereal entity entrap the Enterprise within a nebula and it begins to recreate the events and setting of a fantasy storybook that Dr. M’Benga reads to his daughter Rukiya. For those who have not been following along the entire season. Rukiya has a rare disease that is quickly killing her, so her father is keeping her in stasis within the transporter buffer.

As the ship begins to transform, M’Benga is placed into the King role in the story and must venture through the starship-cum-kingdom to rescue his daughter. An interesting addition and twist is Hemner being partially immune to the entity’s effects on the ship and doing his part to assist the doctor in this adventure. Having someone M’Benga can rely on is a nice touch that stops him from being completely alone.

Episodes like this, in any type of show, have always been done to stray from the status quo to give both the full creative force and the audience something wholly new to play in within a familiar packaging. They are not always successful, but “The Elysian Kingdom” does one of the better jobs of keeping a balance of light and funny along with the classic Trek mystery that could lead to a dire situation. The actors are all having a blast, and it is especially fun to see Anson Mount’s Pike in such a drastically different personality as the crew are all forced to become these characters.

There is plenty of fun to be had from top bottom, but there are things the show must reconcile with. We are given a conclusion, at least for now, on the Rukiya thread. I’m still not sure if it’s a completely satisfying wrap up, nor do I know if now was the time to end it, but the possibility of it going on for too long would not be to its benefit. I found myself once again drying my eyes at the end of the episode, not so much for the storyline as a whole, but for M’Benga. I am interested in seeing how this affects him moving forward as this series has struck a very good balance of episodic adventure and continuing throughlines. Christopher Egan 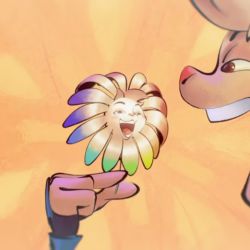 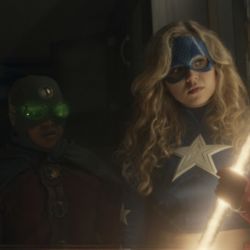 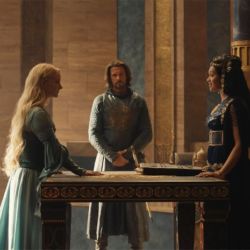