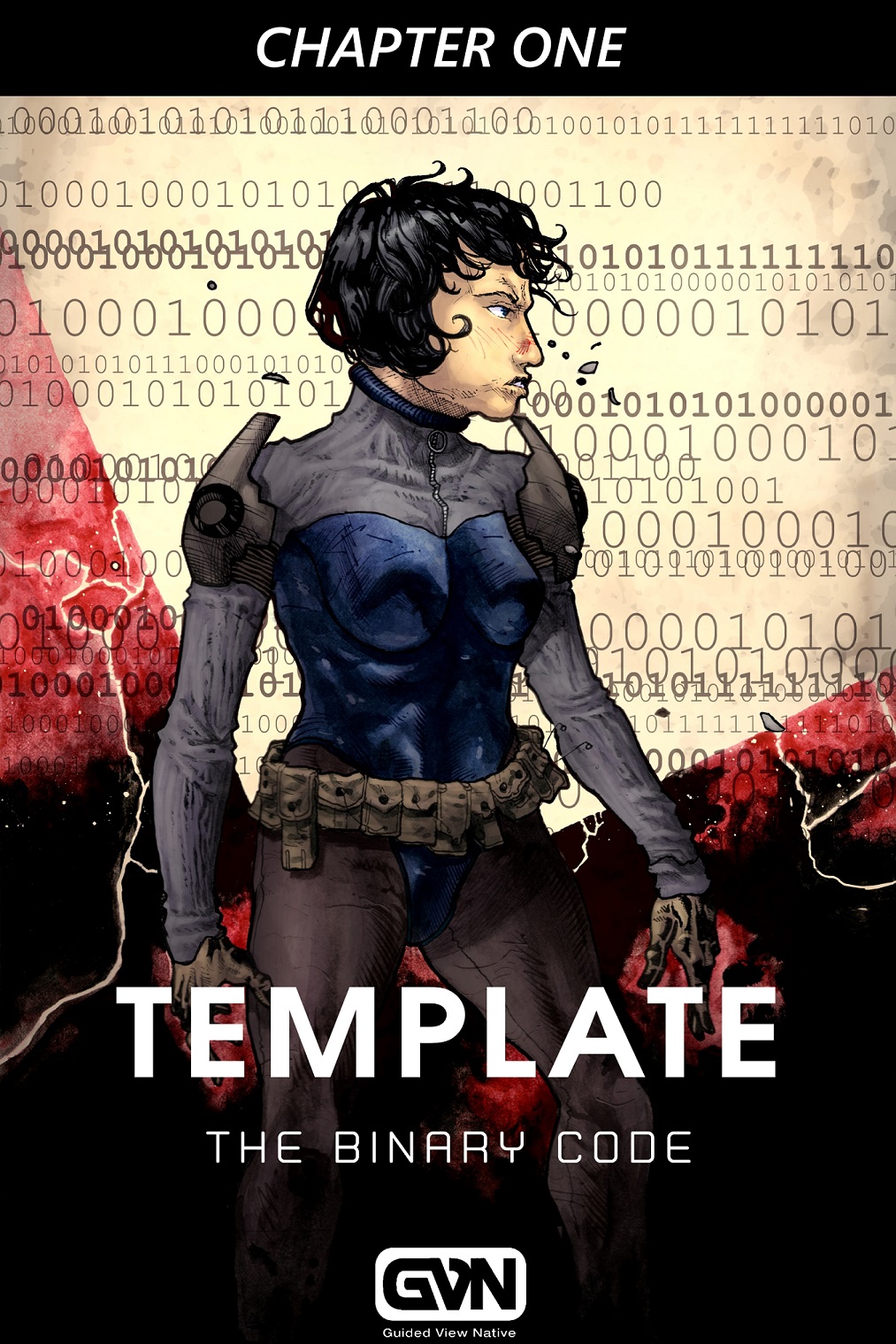 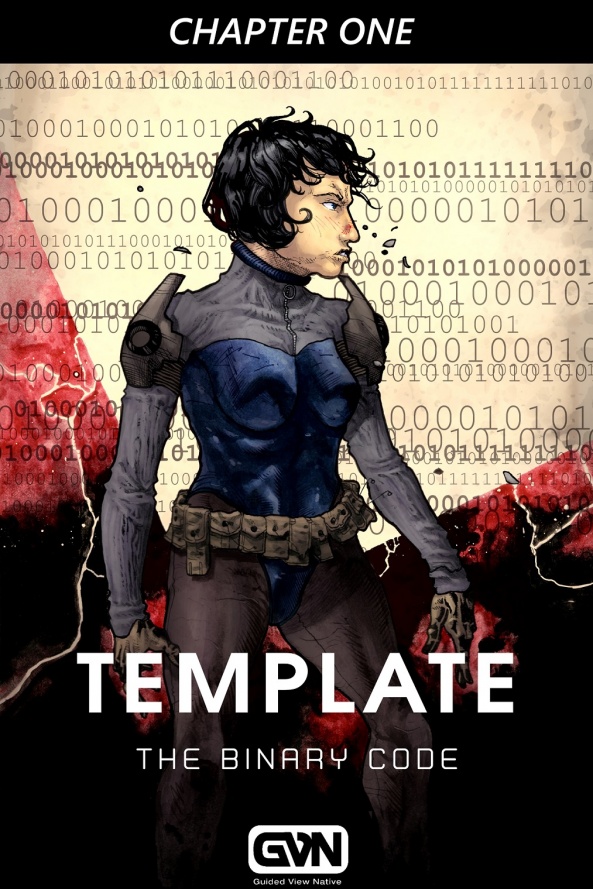 Comixology Submit has been a tricky thing for a lot of creators. While it’s a chance to get your comic on the same platform as the biggest companies in comics, it’s also a strict set of guidelines and a sometimes dragged out approval process. Still, for those that get it figured out, it can be a huge boon in exposure and sales. Case in point is Quinton Miles and “Template”.

Initially a webcomic, “Template” soon moved to Comixology Submit as a Guided View Native comic, and quickly became one of the first real success stories of the platform. “Template” was able to publish a complete first season on Submit, making its way onto two different Submit Bestsellers list along the way. The support and sales even allowed Quinton and artist Andrez Quezada to make a second season, something that seems to happen less and less with self-published comics.

“Template: The Binary Code” picks up after the events of the first volume, putting Beta, our android protagonist, into another mission and another set of problems. Read on as we chat with writer Quinton Miles about “Template”, finding an audience on Submit, writing for Guided View, and more. “Template: The Binary Code” #1 is out today and the whole first season can be purchased for just under $7.

“Template” is a comic that you’ve been writing and publishing, first as a webcomic and then through Comixology Submit, for a couple of years now. What’s the short version of the first volume, for those not familiar with it?

Quinton Miles: “Template” is a sci-fi thriller series centered around the exploits of a private security company named Oversight. In their efforts to create an android clone of one of their top soldiers, the first attempt doesn’t go so well and she winds up going rogue. Thinking they’ve worked all the kinks out, they create ANOTHER android clone of the soldier to hunt her down and that’s really where the story starts. We meet the second clone and main character of the series, Beta, shortly after her creation. From there, the focus becomes chronicling her journey as she develops her own identity as a heavily monitored soldier on her first few operations.

At the start, artist and co-creator Andres Quezada wanted to do something cyberpunk themed so that was the jumpstart for the series visually. On my side of it, things like 24, the most recent Nikita series and Metal Gear Solid were the main influences along with a bunch of other stuff. 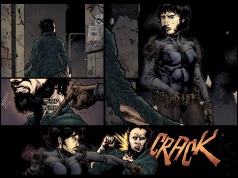 “Template: The Binary Code” continues the story you began with the first volume of “Template”. We pick up nine months after Beta’s first successful mission and the changes that have occurred as a result. Naturally, things can’t stay peaceful for long as Beta is soon required to go on another mission. Where does this new mission take her?

QM: If the question for Beta in Season 1 was “Who are you?”, then the question for Season 2 is definitely “What are you?”. Oversight is brought in to recover an artificial intelligence protoype that was stolen from a top tech company and, at the request of certain parties, Beta is assigned as the head field agent of the operation. From there, as they say, hijinks ensue.

We’re officially in the “ongoing story, new plot” phase of the series now, so there’s an opportunity to mix things up a bit and provide a bit of a jumping on point for new readers. The Season 1 mission was focused entirely around Oversight, and this is our first chance to go beyond that and show people what this world is like. Like Alpha, the new antagonists in Season 2 have their own agendas coming from their own perspectives and I think it’ll be cool to watch it play out.

I also want to point out that the end of Season 1 and the “After Vega” epilogue issue are a part of that aforementioned nine month period. There’s some loose stuff I’ve plotted out in there, too, so I certainly wouldn’t call it peaceful. Just not big enough to warrant “season” status.

“Template” is a Guided View Native comic, which works really well for it on Comixology. As the panel structure and transitions are different than in a traditional comic, how do you go about figuring out the pacing for a certain scene? How does that translate into art on the end of your collaborator Andres Quezada?

QM: Believe it or not, I don’t really write or pace scenes any differently than what I would do with a print comic. I do think, however, that Guided View Native compliments my writing style great and that may be why it comes across like that.

The only real change I made was going from full to half-page scripts so we’d make better use of the digital “real estate”. As I was finishing up “Xeno Trip”, I got with Andres to start to work on “After Vega” and that was where we figured out the methods that would work for us going forward. 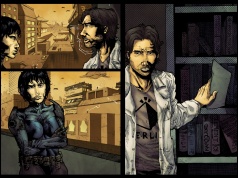 And I definitely want to mention colorist Nathan Lumm and letterer Ken Reynolds too, because everybody played, and plays a part in that. After Vega was the test drive in that sense, and now we all know what we’re doing. At the end of the day, it’s just managing a few more assets.

Pacing wise, our biggest change was going from webcomic to full-blown digital series. Unlike Season 1 and even “Xeno Trip”, this is our first story specifically designed to be on Comixology that’s not straddling the fence as two kinds of comics. Working on those, I was always trying to write to the cliffhanger every week and give people a reason to come back. I’m approaching this, for lack of a better phrase, like an event series.

Throughout the run of “Template”, and also with the other GVN comics that QAM Comics has released, Comixology Submit has been a big avenue for sales and exposure. What have you found helps to make for a successful Submit release?

QM: Heh, I’ll let you know when I figure that out. If I’m being honest, though, I really don’t think about that too much. We’re our audience and we make the stories we want to read in a way that I hope separates us from the hundreds of titles that come out every week. Not just Submit. They seem to be connecting with people and I’m slowly growing an audience off it. Anything else is overanalyzing it.

As I think most indie creators can attest, making comics isn’t the easiest thing in the world. Much less, making a series like “Template” which has 10 issues now. How have you and the rest of the team been able to keep the momentum going? 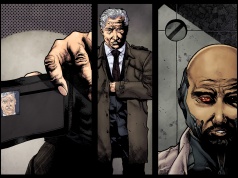 QM: This is probably gonna be the recurring theme of this interview, but we’ve paced ourselves. When we finished Season 1, none of us had any concrete plans of coming back. We just wanted to, hopefully, tell a good standalone story with the potential to return to the world if it got any traction with readers. Then I went and did “Xeno Trip”, while Andres and Nathan took a well deserved break. I think that year away let us miss it a little bit. Not to mention our Comixology sales stayed consistent enough from the single issues and collection to put us on their Submit best-sellers list two years in a row. We all had already made the decision to do another season before the 2014 list was announced, but that definitely validated it. At that point, we all felt it was worth a shot to do another story to keep it going.

“Template” is the first long term comic project from you, from my understanding. What have you learned in the last couple of years and how have you applied it to this new volume of “Template” and also your other QAM projects?

QM: “Template: The Binary Code” is the culmination of everything I’ve learned working on everything that came before it. I hope it shows in the final product. My goal has always been to learn and get better as a writer on each project while hopefully doing the same for everybody I work with in their respective areas. Doing comics at this level, you learn really quick that this is, for all intents and purposes, a team game. And for all the fancy writing I do, it means jack if Andres Quezada, Nathan Lumm, Daniele Cosentino, Giulia Priori, MaGnUs and Ken Reynolds aren’t there to help bring it to life. So the most important thing I’ve learned? Be good to your teammates.