Laurence Campbell is the newest interior artist to join the world of “B.P.R.D.,” and on his first arc, ‘Wasteland,’ knocked it out of the park. In fact, our Mignolaversity team called it one of the best “B.P.R.D.” arcs ever. Especially considering the lineage of “B.P.R.D.” artists, this is high praise.

Campbell is a British artist, who works amazingly well in both black and white and when colored – but we are such huge fans of his black and white stuff, that is what we’re going to primarily feature. Campbell was nice enough to sit down with us to discuss his technique, his influences, and what he looks for in a project. 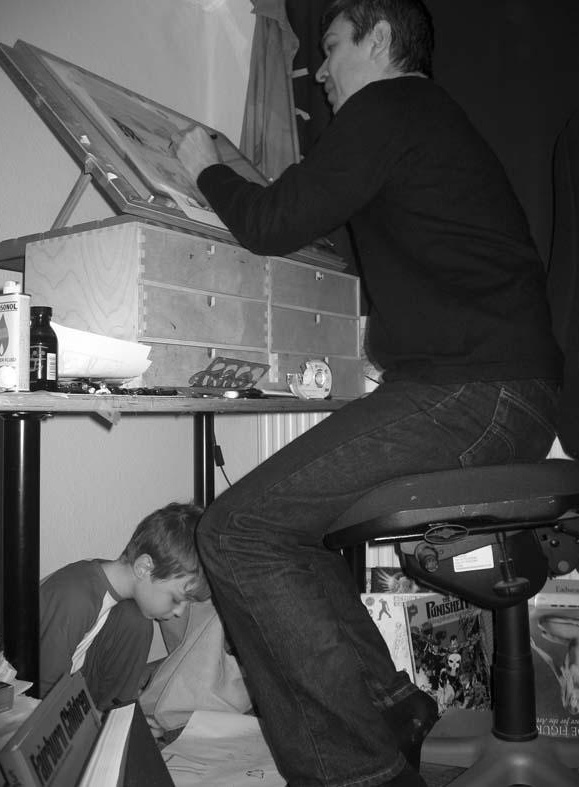 What was the first moment when you realized “Wow, I can draw pretty well!”?

Laurence Campbell: I guess that would of been in the infants around 6 years old. I remember teachers commenting about my drawings of dinosaurs. Later throughout school I used to win competitions and I guess it continued from there really.

What comics were the ones that really spoke to you as a child? Did any artists stand out as particularly influential?

LC: I remember reading black and white reprints of Marvel comics, later I picked up Starlord which then joined forces with 2000ad which became a huge influence. The art was something which always stood out for me. From an early age I really took notice Brian Bolland, Gary Leach and Steve Dillon. Later looking at Steve Yeowell on Zenith was the point when everything clicked and I wanted to be a comic artist. 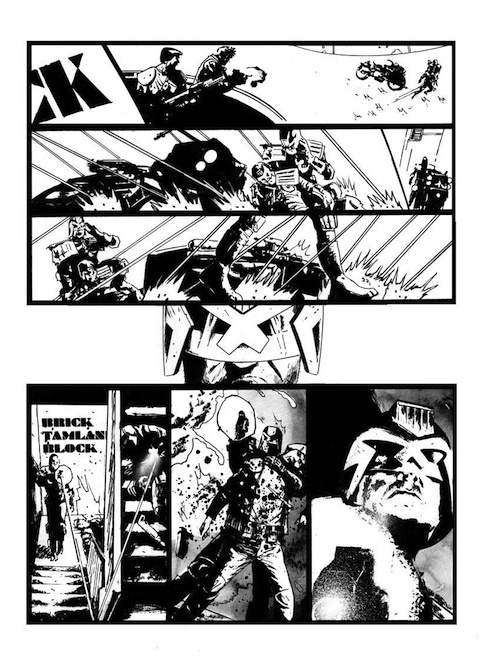 Growing up in the US, I had almost no exposure to Judge Dredd, outside of the Sylvester Stallone film. What is it about the character that really resonated with you as a lad?

LC: I remember the story called “The day the Law died” was very powerful to me. Dredd getting shot in the head, not having his helmet on but bandages instead. I thought this was very cool. You also had corrupt Judges, Kleggs. Still have a lot of love for that story.

If someone asked you to describe your style of art, how would you categorize it?

LC: Moody black and white art is what most people say. Someone once said I was the Michael Mann of comics which I thought was very funny. I get a lot of influence from films when I watch them. I know some people like their comics to be comics and not films but I’ve always seen them that way.

From my very limited experience, it seems like 2000AD is a great place for up and coming writers and artists to get some of their early professional work published. What was your experience of working at 2000AD like?

LC: I love working for 2000ad. They’re very much hands off once you’ve gained there confidence. With 2000ad you get to work on some stories which are pretty much out there. The talent which have gone through 2000ad is very impressive. Working for 2000ad was one of my goals from an early age.

How does working for 2000AD differ from working at a publisher like Marvel, both in terms of the length of story and in terms of what is expected from each installment?

LC: With 2000ad you have around 5 pages to tell a story. So you have a lot to cover in that time and you learn a lot about storytelling as a writer and as an artist. As I said before, 2000ad are pretty much hands off so you have some room to experiment. With Marvel or any American publisher you have 20 pages so the pacing is slower. I like both ways, in some ways I think my work is more suited to a slow build which tends to be more like American comics.

Which of your professional works do you feel is where you really hit your stride, in terms of your style coming together?
Continued below

LC: I still looking to push my artwork further. I’m not totally happy with my artwork, although I don’t know an artist who is. Looking back at my work I certainly saw a jump when I was drawing the disciples for Image comics another when I was drawing Breathing Space for 2000ad. I was working on Breathing Space with Rob Williams when we first got picked up at Marvel. The next step up was when Axel Alonso at Marvel encouraged me to ink myself on Punisher Max- He’s a great editor. Working on BPRD I’ve used watercolour washes which is new to me and I’ve been enjoying that.

With your Marvel work, you’ve worked a lot of the fringes of the universe, but with some of their more popular characters. What is it like to get to draw such iconic characters? Do you feel an added pressure when working with characters like Deadpool or Wolverine?

LC: Don’t feel any pressure but I certainly feel lucky being given the opportunity to work on these characters. I’ve been lucky with editors giving me more street level characters. Wolverine, Moonknight, Deadpool pulp etc. These characters fit more with my style. 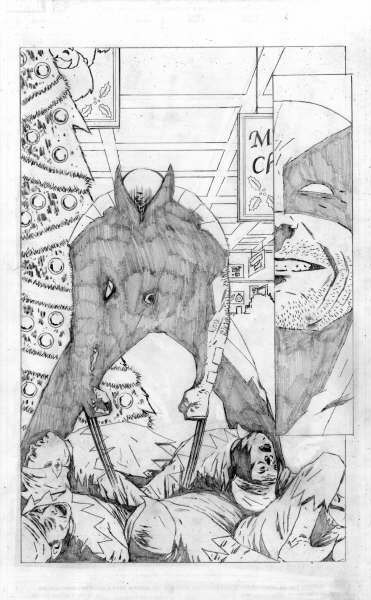 You’ve also illustrated a book based on Stephen King’s The Gunslinger. What is it like to adapt the words of one of the world’s most famous writers?

LC: Yeah that was great. I read The Gunslinger as kid. Liked the idea of drawing a mystical cowboy. I felt the pressure more with that as I was following artists who I have huge respect for- Michael Lark, Sean Phillips, Jae Lee etc. Also got to work with Richard Isanove who’s a great colourist and brings huge amounts to the series.

You’re one of the more recent recruits to the B.P.R.D. stable of amazing artists. What sort of familiarity did you have with the characters/creators before starting on the book?

LC: I’d read Hellboy from the start. In fact I remember where I bought the first issue. That’s how much of an impact it had on me. I’d picked up a few of the BPRD trades. When I knew I was starting the Wasteland arc I bought all the BPRD collections and read them in one go. Love them. Seeing the developing and unfolding story and the interweaving of characters etc. John and Mike do an amazing job. 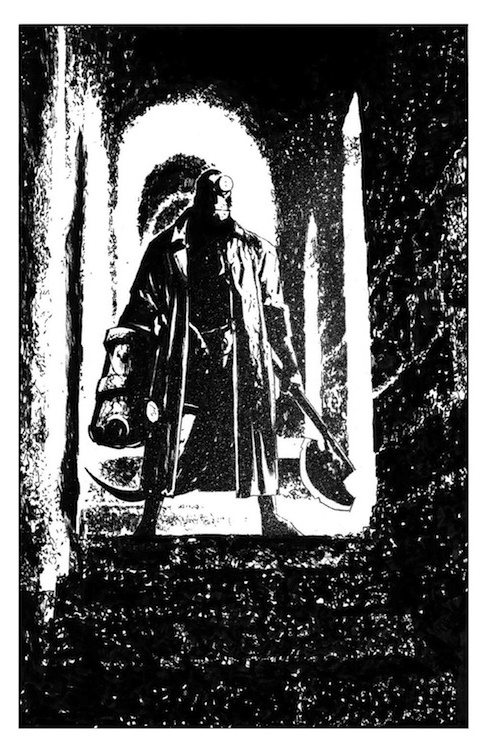 Is it intimidating to work with a writer who happens to be an artist as well? How does Mignola’s influence hang over your work on “B.P.R.D.?”

LC: Ha, yes. Yes it was. Mike’s work had a huge impact on me, and to be honest all the artists I know. I was a little intimidated when sending my artwork to him first off, but I must say Mike and everyone have been great. Everyone is puling in the same direction. It’s like working for a small design team. the editors, Mike and John all involved. The whole Hellboy universe has always attracted artists who I have huge amounts of respect for. I think it’s fair to say everyone raises their game when working in the Mignolaverse. That’s how much respect there is for the books. And to top it off I get to work with Dave Stewart.

One of the things I’m attracted to is good writing, I want to work on stories which have depth, developing characters … and monsters.

What sort of challenges are inherent in drawing a book that is so damn bleak?

LC: I like drawing bleak, even in the darkest of times there are moments if light. I think I was asked to join the BPRD team because I tend to bring a bleak realism to the page.

When drawing something like the giant monsters in “Wasteland,” how much do you rely on looking at what prior artists have done with similar characters? Do you typically use a lot of reference material when drawing?

LC: The editors Scott [Allie] and Daniel [Chabon] are very good at giving the reference and feedback when you need it. Sometimes working off what other artists have done, other times creating your own monsters.