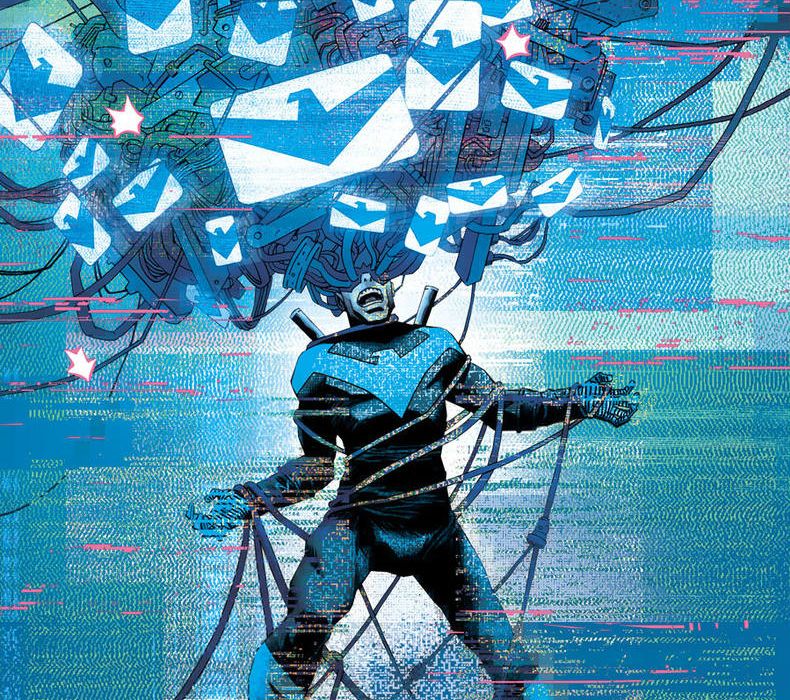 Ben Percy is making the jump from one street-level hero to another this week as he transitions from “Green Arrow” to “Nightwing,” with series artist Chris Mooneyham. Percy and Mooneyham’s run will center on Dick Grayson taking on all sorts technocratic, tech-based threats ripped from today’s headlines. I had the opportunity to talk to Percy at C2E2 earlier in April and the guy was clearly ecstatic about getting to be a part of this book. We talked about the run, who Dick Grayson is and what’s coming for Bludhaven and the DCU. You can check out the interview below and the first issue of their run, issue #44, which hits shelves tomorrow.

Ben Percy: Of course. Thanks for taking the time to chat about “Nightwing.”

So you’re coming off a 38 issue, two-year run on “Green Arrow,” which has been one of the highlights of Rebirth to a lot of people.

BP: Thank you. It’s bittersweet saying so long to Ollie. I was even there before Rebirth from The New 52.

BP: Yeah so 52 issues total. That’s a long time to spend with a character. I feel really lucky to have that long.

And you’re winding down your “Teen Titans” run, which was over the same time period in Rebirth. Now you’re coming onto “Nightwing” in #44 in May. How is it making this transition?

BP: I’ve always dreamed about being part of the Bat group. I have a darker sensibility and feel that I belong in a shadow soaked zip code such as Gotham or Bludhaven. So this is a dream come true.

You’re taking over the reins from Sam Humphries and Bernard Chang who had this past-driven story with the Judge, and even before that Tim Seeley who took Dick from spy to full time hero. With all that in mind, who is Dick Grayson and who is Nightwing to you? How is that different from what Seeley or Humphries had been doing?

BP: Whenever I take on a new series, I read everything that’s come before. I want to stay true to the legacy of that character. So I’ve been working my way through the “Nightwing” library, reading some stories for the first time and revisiting others. I love what Humphries did and what Seeley did, and I love what [Tim Seeley and Tom] King did with “Grayson” in The New 52. I’ve also looked at iterations of Dick that I admire from the [Marv] Wolfman/[George] Perez “Teen Titans,” or in Scott Snyder and Jock’s “Detective Comics” run. One of the things that interests me about Dick looking over this whole landscape of stories is how adaptable he is. How he’s played so many different roles in the DCU and how vital he is to everyone. He’s a follower. He’s a leader. He’s somebody who, in this cynicism sandwich of Damian Wayne and Bruce Wayne, enjoys what he’s doing. Takes pleasure in kicking ass and bringing justice to the lawless alleyways. But if you think about his adaptability and his wide reach, that’s what makes him vulnerable. So I was thinking about that. I was thinking about how he is at the center of a web. He knows everyone. And that makes him . . . worrisome as a vault of information.

So you know all about identity theft. This story, this opening story, in part, is about secret identity theft. When you think about the way that every time you click on a mouse, every time you tap a keyboard, every time you swipe the screen, you’re speaking into a algorithm. If you think about how every time you click on an attachment you might be downloading some malware, some spyware, watching your every move. You’ve probably read headlines about Cambridge Analytica studying our data and using it to compromise us. Dan DiDio wanted us to unleash an exaggerated version of that threat on the DCU. He wanted the dark web to become a major force of evil. And Dick Grayson is an interesting counterpoint to something like that, in part, because here he is at the center of his own web, and here he is facing the dark web. Vulnerable data is one of the greatest weapons of this time. Dick is the source of all vulnerable data in the DCU. He’s also uniquely situated as a hero in this storyline because, he’s not a luddite, but he relies on his batons and on his acrobatics. He doesn’t surround himself with gadgetry the way that Batman and Batgirl do. So how does Dick Grayson fight something he can’t punch? 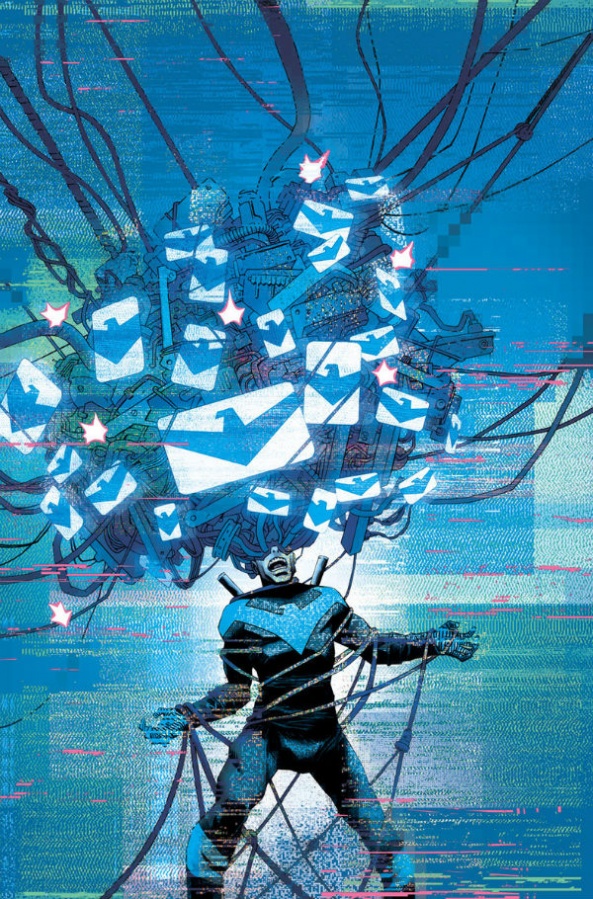 Yeah, yeah. That’s really interesting positioning Dick as the holder of all these secrets. If somebody could get ahold of Dick Grayson they could get ahold of the rest of the DCU. Yeah that’s really cool. So the first arc of this book is called ‘The Bleeding Edge.’ You’ve described it a little bit and you’ve talked a little bit about your research that went into your novel The Dark Net.

And you’ve talked already about the dark web and identity theft. Who is the force that Nightwing is up against and combating him with all this information?

BP: It’s a technology company called Mirage that has moved into Bludhaven. Right now, in real life, Bill Gates is pumping hundreds of millions of dollars into a plot of land in Arizona trying to create a “smart city.” Right now off the coast of China, islands are being built. Islands are being built! Smart islands! It’s a tech version of colonial expansionism going on there. I’m taking that headline and funnelling it into Bludhaven, which is a problematic city, a city of ruin, a city of scandal, and gentrifying it through this tech company that wants to become a co-sponsor of the zip code. So buildings are being torn down and rebuilt. A high speed loop is being put in. And every address has delivered to it a package, and in that package is something known as “The Phantasm.” The Phantasm is a VR unit which has some parallels to Alexa, and Alexa is always listening.

The first version of the threat readers will encounter is someone knows as Wyrm, which obviously is a nod to the worms that chug through hard drives. So he’s an invasive presence in Bludhaven, and all you’re seeing is a digital projection, an astral projection, you don’t really know who’s behind this. He’s not alone. I’m not introducing everyone all at once, but gradually, you’re going to understand there’s an army at work. And it may have some connection to a villainous organization that already exists in the DCU.

Very cool. Well so you’re working with artist Chris Mooneyham on this book. What’s it like working with him and why is he a good fit for telling this tech-based, mysterious story that y’all are crafting?

BP: Chris Mooneyham is the second coming of David Mazzucchelli.

BP: Our hallmarks, set of hallmarks, were “Batman: Year One” and “Daredevil: Born Again.” If you look at the pages that have been released you’ll see that. You’ll see the same mature sensibility, the same classic staging, the same beautiful grit, the shadow-soaked, neo noir atmosphere. And not only do I love his artwork, love his tight line, love the way he stages action sequences and captures emotion, I love the conversations we’ve had and the editorial team has had about how to take an invisible world, a virtual world, and make it visible. So, you’ll see influences from The Matrix, you’ll see influences from Tron, and you’ll see creations of our own that materialize and make physical the signals that stream all around us, and the devices that serve everyone right now, that kind of prosthetic cerebrum. We’re gonna make it . . . this is about . . . we’re trying to make circuit boards and wi-fi signals a little more alive. A little bit more nightmarish. And hopefully people will recognize in this visual language the threat that they face in their own lives, a little dramatically, and feel a sense of fear and vulnerability. 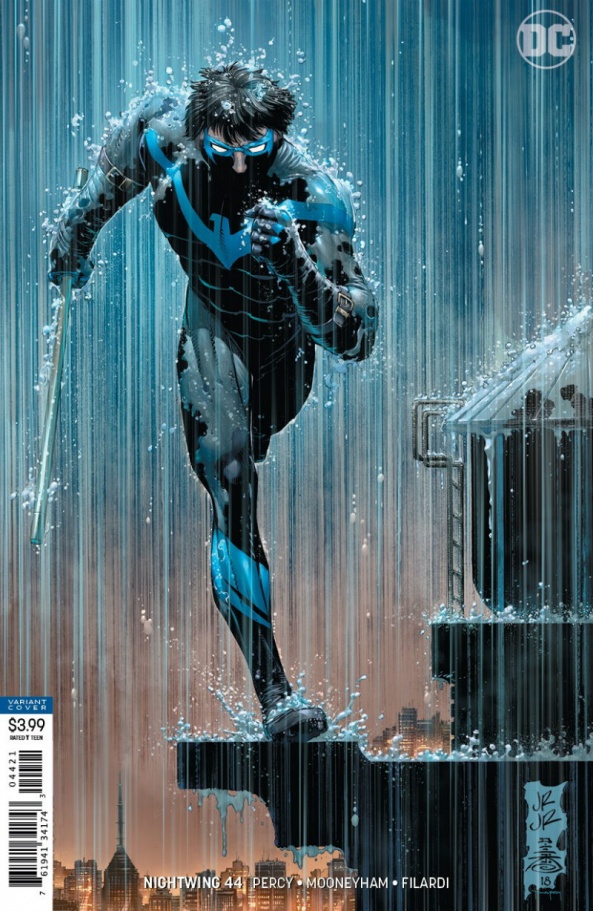 Well so to wrap up, one of things people think about when they think Dick Grayson, is butt shots.

BP: [Laughs] Well right away I make a crack about this. On page two panel six, there’s some graffiti on the subway wall that says, “Butt-Haven.”

BP: I’m not going to be an ass-centric writer. [Laughs] But you can’t disregard it either. I will say this, separate from butts, there will be some romance that works its ways into the series as well. I’ve always been especially interested in the relationship between Dick and Babs. And she obviously has the skill set that will be essential to the threat they face.

That is true! That is true. Well Ben, Thanks for taking the time to do this, is there anything else you’d like to tease or promote about the book?

BP: Umm . . . just that this story begins in Bludhaven, but it’s gonna get a lot bigger.

“Nightwing” #44 is out tomorrow, May 2nd, from Percy, Mooneyham, and colorist Nick Filardi, and will continue monthly. 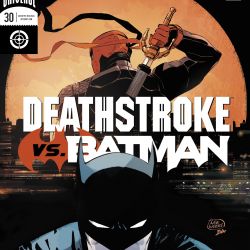 Christopher Priest has been crafting one of the most intelligent and praised comics of the Rebirth era at DC in “Deathstroke” with a slew of artists such as Carlo Pagulayan, Joe Bennett, and Diogenes Neves. Priest and Pagulayan began the the book together way back in August 2016, and the duo have reunited on ‘Deathstroke […] 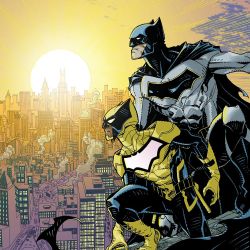 Cully Hamner has had quite the career at DC Comics from designing new and different takes on characters like Jaime Reyes’s Blue Beetle to working on the costume designs of The New 52. This year, Hamner, Tony Patrick and Scott Snyder have been collaborating on the three-issue miniseries “Batman & The Signal” spinning out of […] 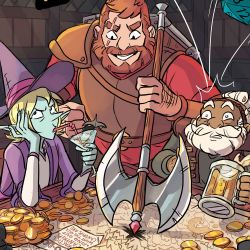 You might know them from podcasts like “My Brother, My Brother, and Me,” “Shmanners,” or any number of others the McElroys are a part of, but coming soon, here there be graphic novels! The McElroy’s in July of this year have a graphic novel coming from First Second Books and artist Carey Pietsch called “The […]