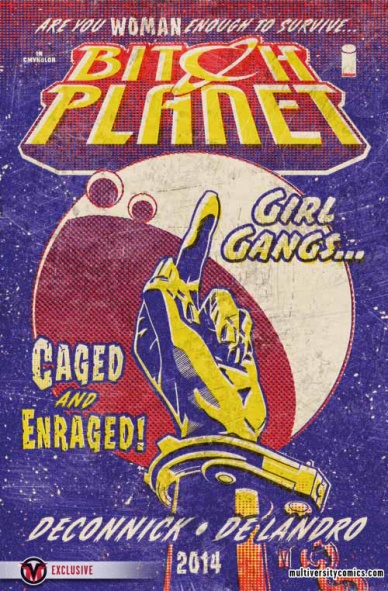 We were very excited to get to be the exclusive home of Kelly Sue DeConnick and Valentine De Landro’s “Bitch Planet” announcement a few weeks ago from Image Expo. We’ve often been outspoken fans of Kelly Sue’s comic work, and a new book by Valentine De Landro is no small event either; De Landro has illustrated some of our favorite comics, including a particularly wonderful run of “X-Factor.” Really, the combination of these two talents can only mean one thing: that “Bitch Planet” is going to be one of our favorite new books.

With that in mind, we’re very excited to present our chat with Valentine De Landro about his work on the series.Read on as we discuss the current state of comics coming out of Image Expo, the creation of the book, and of course, women in prison

So, if my research is correct, this is your first big creator-owned series. Before we talk a bit more about “Bitch Planet,” can you tell me how you came into the comic biz?

It all started when I joined a studio named Bright Anvil back around 2000. I got the opportunity to learn from some incredibly talented artists and made some great friends. A few of us from the studio worked to put our portfolios together and hit the conventions. Wasn’t an overnight deal, but an opportunity came and I did my best with it.

Having a solid background in superhero comics (I remember fondly reading your issues of X-Factor, for example), do you find there are any major transitions for you as a creator with your work now?

There are facets of developing a book that you’re obviously not exposed to as a work-for-hire artist. But ultimately it comes down to illustrating a page and telling a story.

I think the industry is seeing a massive overhaul in perception, and a large emphasis is being placed on Creator-Owned Comics. Do you feel like now is a better time to work on creator-owned books than when you first came into the industry?

I wouldn’t say “better,” I think the book still needs to be written on what this period of creator-owned comics will mean for the industry.

It’s very exciting to see the unrelenting, unapologetic wave of creativity. And even more exciting is the response from the readers and retailers. For whatever reason – following your favorite creator, interest in a particular genre, or both – there’s no way creator-owned comics could reach this level without support from the fans and DM stores.

It’d be very natural, and not at all wrong, to tap into this mega-surge of popularity for superhero properties also happening right now. But alongside of that, we’re seeing lots of risk being taken. 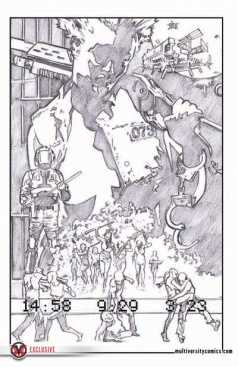 So let’s talk a bit about your new book. How did you and Kelly Sue end up working together?

Kelly Sue and I met at Fan Expo up in Toronto in 2011. Eventually, after some unsuccessful attempts to connect and collaborate on WFH, we decided to do something on our own.

Can you talk a bit about the initial creative dynamic, how you two came up with what is now “Bitch Planet?”

Well, once we decided we were going down this road she asked if I wanted to build up an idea with her from scratch or take a look at some other concepts that she had been developing.

She sent five different pitches, if I remember correctly. All of them amazing. All of them would be a hit. But from the second I read the description, “Bitch Planet” was it.

The women in prison trope is a pretty famous/familiar one, so did you have to do any research to get ready for the book or is it all coming rather naturally?

We’re definitely paying homage to the films that this genre is built on. Lots of movie-watching: reviewing some favorites and discovering new ones. Also some great books and essays on the subject.

Is there any particular film or story or even grindhouse-style you’re hoping to emulate with the series?

You’ll probably be able to notice specific influences, just comes with the territory of creating something in such a specific category.

Could you give me an example or two of the some of the things you’re looking at in preparation of this book, and how those things influence you?

Because I recently wrapped up the promo piece, I’ve been studying a lot of the grindhouse-style posters and one sheets. They’re inherently loud and obnoxious and cheesy. Nothing I’ve worked on previous to this could be described as any of those things. So I’m crashing through my comfort zone, which is great.

Only the two images from the book have been released so far, but can you tell me a bit about the design of the book?

One of the reasons I wanted to collaborate with Kelly Sue on this concept, along with my fascination and love for these types of movies, is that I knew it would be the biggest challenge for me. So I’m pushing myself to go “bigger” with everything. Big layouts, big action, big characters.

Other than that, I’m letting it take me where it’s going to take me. 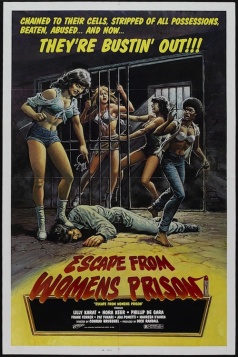 A lot of those grindhouse movies had a sort of subtle aspect of comedy to them as well. Are you going to try and put any humor into the book, or is it more of a serious affair?

I warned Kelly Sue that my sense of humor is a bit off, so she’s on watch to bring out the big hook, so to speak. But you’re right, comedy is a part of these movies, so I’d watch for it.

Can you tell me a bit about the lead characters of the series, or is it too early for more specific details?

Yeah, I don’t want to give away too much now. But maybe some character art will be on the way soon?

I think that introducing cinema into comics is certainly a more modern tradition (particularly with the introduction of widescreen comics), but do you have any background or specific interest in film that you’re utilizing with your comic work?

I’ve studied cinematography on an admittedly superficial and amateur level to gain further insight on drawing sequentials. I’ve also done some storyboarding work too, which is similar to comics, but very different in and of itself.

When you start exploring it, you notice that comic artists have brought a cinematic eye to the medium since it’s advent. Look at what Severin, Chaykin, Totleben, Gibbons, Krigstein, Otomo, Steranko — and a legion of storytellers that I can’t remember right now — delivered with pencil and ink like they were holding a camera and framing shots.

Comics and films have their respective strengths and limitations in delivering a narrative. We’re embracing and welcoming the obvious comparisons that’ll be made to WiP films, especially since we’re emulating a genre that was made popular by those movies. But “Bitch Planet” was conceived as a concept for a comic book, not a translation of a movie in sequential panels.

So as silly and goofy as those exploitation films were, I think they always managed to provoke their audiences, albeit in different ways. Is there anything in particular you’re hoping to get out of the audience with this series?

Well, if you give me a bit of space to be eye-rollingly pretentious (more pretentious?), I’m going to paraphrase Ang Lee. He had a great quote recently that I really liked and I remember it. That stories are meant to be provocative, and not necessarily a statement or a message.

My job is to tell the story and step back. I’m focusing on bringing this world to life and (please, please!) do right by Kelly Sue’s awesome words. But the audience is simply watching us explore our fascination of girl gangs and classic cinema.

I hope whoever picks it up and reads it has a good time. Following that, whatever thoughts seep into your brain I take no responsibility for.