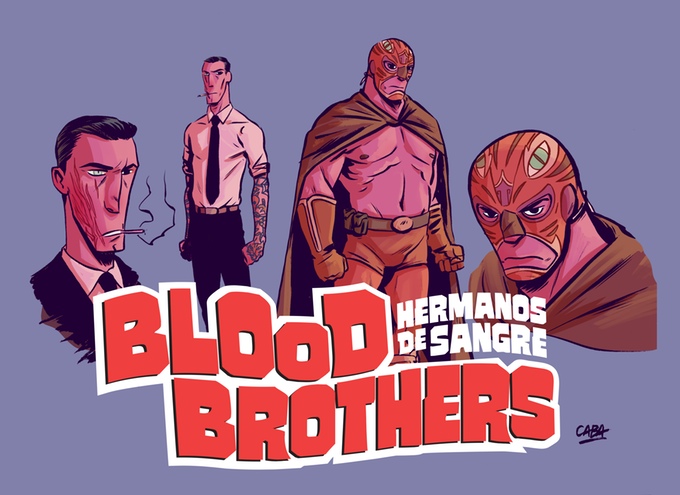 There is an inherent risk in backing any project on Kickstarter. Many times Kickstarter is an avenue for new creators to build backing and funds to create and produce their project: ill they be able to produce it, will it be good, did they calculate shipping right, and will you ever get your reward. Then there is Fabian Rangel Jr and his new Kickstarter for “Blood Brothers.”

Fabian brings four previous successful Kickstarter campaigns, “Space Riders” from Black Mask Studios, and issues at Boom!, Dark Horse and IDW in experience to the Blood Brothers campaign. “Blood Brothers” is Fabian, artist Javier Caba and letterer Ryan Ferrier telling the story of police team Diego (the hard-boiled detective) and Gabriel (the luchador) as they tackle crimes of a supernatural nature. We were able to talk to Fabian about this new project, Kickstarter, and the future of “Space Riders.” Below you will find our interview with Fabian and be sure to check out “Blood Brothers” live on Kickstarter now.

[Note: this interview was done before the Two-Headed Press announcement was made.] 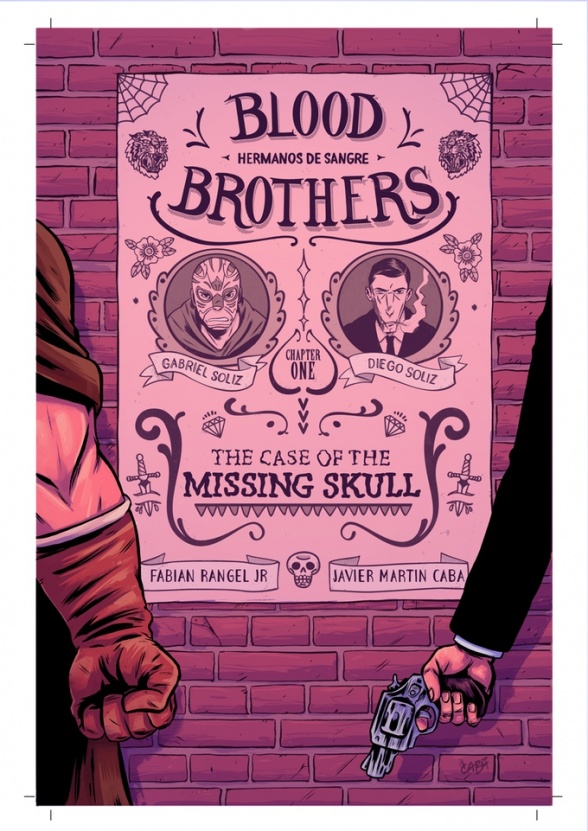 I feel like your catalog of work speaks for itself at this point but for anyone who might need to know why they should back “Blood Brothers”, what is the comic about and why should they?

Fabian Rangel Jr: It centers on two brothers, one a hard-boiled detective, and the other a luchador, who work for the police department in a city where the wall between reality and magic/mythology has broken. I’m hoping the people who like action, monsters, detective stories, and family drama will be interested in it. They should also back it because it’s fun. Comics should be fun, yeah? I think so. The biggest reason they should back it (other than wanting to read a new fun comic) is that they are directly making sure Javi and Ryan get fair rates. It’s becoming increasingly rare in comics to get an actual page rate, so backers are supporting creators being treated fairly.

With touches of fantasy, the supernatural, monsters, pulp comics, and luchadores how to you attempt to balance all that into one story?

FR: One of the great things about creator-owned comics is that we can do whatever we want. Our main dudes are pulp characters navigating through a fantasy driven world. I think comics like “Hellboy” and “Saga” proved that it’s possible to tell compelling stories while the cast of your book is kind of strange. At the heart of the story is this relationship between these two brothers, it’s just set in a place where the extras and most of the other characters are more visually interesting to look at than say a bunch of normal people.

What influences from each genre are you bringing into “Blood Brothers” or what do you think is uniquely Fabian and Javier?

FR: Well, there’s a mystery involving a missing skull, and that’s about as “pulp” a set-up as you can get. From fantasy, I’ve just always loved the idea of how these non-humans would have to adjust in a human world. I think most of them would just get jobs and start dressing like normal people. They’d assimilate, but wouldn’t be able to 100% blend in, and that rules. I’m also a huge fan of genre mash-ups. The Sixth Gun comes to mind, a comic where you see elements that don’t ever get thrown together, suddenly get mixed in. Mostly, I wanted to take all those exciting images from the aforementioned genres and connect the dots through story. Plus, I wanted to do a modern take on all those old El Santo movies and comics.

The second part of your question: If people are familiar with my work, namely “Doc Unknown” (with Ryan Cody) and “Space Riders” (with Alexis Ziritt) they know that strange and fun comics are my jam. For people who haven’t read those, they just need to know that I really go for it in them comics. Javier is someone who’s art lends itself so perfectly to this comic. I’ve been thinking about a “luchador fighting monsters” comic off and on for this entire year (a little after writing the Lucha Underground comics) but when I saw Javi’s art, and asked what kind of stuff he likes to draw, he responded with something like “anything weird, fantasy, monsters etc” and while I’d usually just pick one or the other, I thought of way to combine pulp and mythology. The result is this comic I couldn’t be more proud of. So yeah, this story couldn’t have come from anyone else but Javi and I.

You have four successful Kickstarter projects under your belt. Why do you feel you keep returning to the platform and what are you taking into this project from your experience with the previous campaigns?

FR: At first, it was very much a last ditch effort. Three years ago I was fed up with pitching and spending money out of pocket to make comics. AKA I was putting myself in debt. But after that first one was such a success, it became a way to keep telling more stories. Since my last time running one of these, I’ve actually enjoyed my most successful streak of getting pitches picked up. But even with projects lined up at a handful of publishers, I still have that desire to get a book made as soon as possible, and to “cut out the middle man” by getting this story directly into reader’s hands. Publishers can’t keep up with me, man! So basically, I keep going back because I love making comics, and Kickstarter is the best tool available for getting them made so that I can pay my collaborator. One thing I’m taking from past experience is thinking of new ideas for rewards. We’re doing some things we haven’t done before and I’m really excited about making all this cool stuff!

How did Javier Caba come on to the project and what does he bring to the comic? I love the look of the art. I has a very bright pulp vibe almost like The Venture Brothers series.

FR: Javier followed me on Twitter a month ago in the wake of the “‘Namwolf” announcement, and I checked out his art and immediately knew I wanted to work with him on something. Blood Brothers wouldn’t have come into existence without me seeing his art, and being inspired by both it, and the fact that he said he wanted to draw stuff like this. I’m absolutely blown away by every piece of art that has been coming in. And yeah, you’re right, because of his art, this series feels like an animated series in comic form. 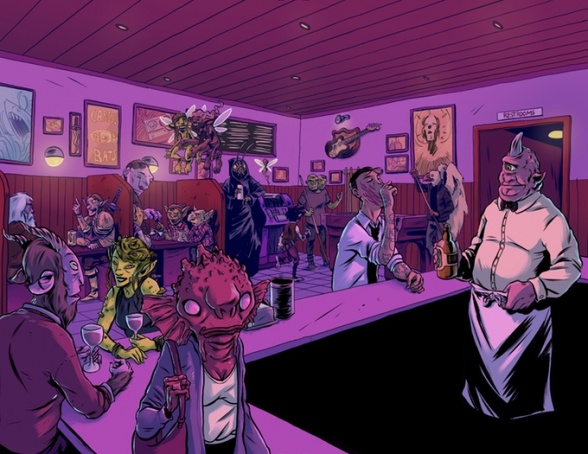 What is your favorite tier of reward in the project?

FR: Oh, man. This one’s easy. It’s the glow-in-the-dark action figure based on Gabriel (the luchador). The coffee mugs and enamel pins will be also be cool (never offered those before) but I’m a sucker for action figures, and glow-in-dark stuff especially. Sometimes I’ll see a toy and be like “hmm, I don’t really need another action figure” but then I find out it glows in the dark and I’m like, “OH HELL YESSSS BUYING ITTT”
Plus, I specifically gave the luchadore a “spider-sense” type ability, where he glows in the dark when supernatural threats are nearby, JUST so I could make a glow-in-dark figure and have it be story accurate.

If the campaign is successful do you see yourself revisit “Blood Brothers”?

FR: 100% yes. I’ve already thought of quite a few ideas for another four issue mini. Just like “Doc Unknown,” I could easily just write this comic for years.

In addition to this Kickstarter you have the second volume of the hit “Space Riders” with Alexis Ziritt and “Namwolf” with Logan Faerber set to release in the near future. What can readers expect from each series and how exciting is all this for you? Its evident how much you love comics and I have to imagine this is an amazing time for you.

FR: With “Space Riders,” we wouldn’t have done a second volume if we didn’t think we could top the first one. Luckily, we’re turning it up to 11. And by “it” I mean the Kirby influence. I hope that when people finish volume 2 of Riders they’ll just close the book and die of a blown mind. With “‘Namwolf,” they can expect a fun as hell monster comic mixed with a war comic. They can expect to suddenly have the desire to turn into a werewolf and shoot a machine gun. I could not be more excited for 2017. 2017 is the making comics year I could only dare to dream of in years prior. I’m getting to do five creator owned minis with incredibly talented artists, and there’s one huge thing that’s coming out next year I haven’t been able to announce yet that is totally my biggest goal realized. Yeah, it’s been weird because this year has been extremely light on actual releases, but has been green lights from publishers, and lots and lots of coffee and writing. A big building year. Next year is when the books will be coming out and it’ll be evident just how damn busy I was this year. I can’t help it. The more I write, the more I want to write. The more amazing artists I meet, the more I want to make up fun stuff for them to draw. I recently had one of my collaborators tell me our comic is the comic he’s always hoped to work on. That’s the biggest compliment I can get. As long as I keep the artists I’m working with excited, and play off of their strengths, I think readers will keep responding to that. I think people can see that we’re making really fun comics.