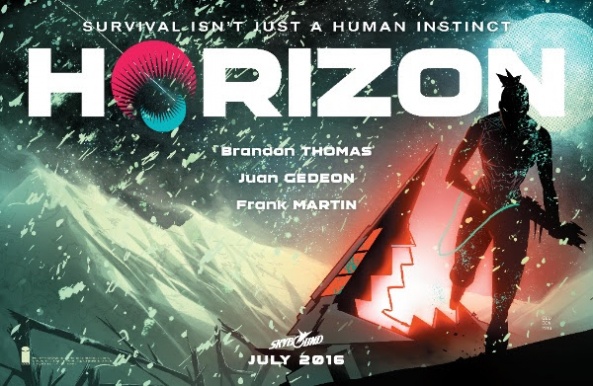 Alien invasions are something that we a lot of in film, television, books, and comics. Something that we don’t see as much, however, is an alien invasion where we humans are the ones being the aggressor, the ones menacing an entire world full of people. This is the general premise of “Horizon” by Brandon Thomas and Juan Gedeon, which was one of the titles announced at the recent Image Expo. Centering on a group of aliens who come to Earth in hopes of stopping a human invasion of their own world.

At ECCC, we had a chance to chat with Brandon and Juan about “Horizon”, alien invasions, coming to Skybound, and how surreal it is to be working with Image Comics. Read on to find out more about the book, with the first issue dropping July 13th.

You just announced “Horizon” at Image Expo. What is the story about for those who may have missed the announcement?

Brandon Thomas: It is essentially the story of Zhia Malen, who is our main character, she lives on another planet far away from us and she has just found out that Earth wants to conquer her planet. So she takes a small strike team to Earth to sabotage our invasion efforts. So that is basically how the book starts, the first scene is her coming to Earth, not quite in the way that she wanted to come to Earth. The book starts with her coming to Earth and gathering up her team and that is where we start. It’s a really cool sci-fi conspiracy thriller, great actions, great designs by Juan. So it is a lot of cool stuff. It will be an exciting, unexpected book for people.

Alien invasion is a trope that is used a lot in sci-fi and comics and all that but the role has been reversed because we are the bad guys here. So what made that something to play with?

BT: Because it seems so possible. Just this idea that we have completely torn our planet down with the studs and now we have to go out in space and find somewhere else to live. We found just the place, and because it is us we are like, “oh we can take this place over. It is not going to be too difficult?,but they find out about us so they come to Earth to put a stop to it. It is super interesting to examine how poorly humanity would look from the outside, from someone that just was viewing even a small cross section of our history. “Look at what these people have done to each other and their planet; we don’t want them on ours.” It’s not a cynical or preachy book, it’s an action thriller, there is explosions there is subterfuge, there is cool  holographic disguises, there is chases, but it has been super fun and this is an idea that I had years ago and it really feels right on time given some of the things that are happening in our country now.

You just imagine someone came here from another planet, like what is wrong with these people? Why can’t they get it together? And their planet is basically how Earth would be if we could get our act together which is why it is attractive to us. It has been super cool and interesting to play with those things. One of the main questions of the book is how many second chances is Earth going to get? Because our planet is ruined, we need to find somewhere else and there’s this idea that we will do it right this time. We will go to this planet and we will settle there and we won’t tear it up, we won’t gouge it of resources until it is like a burnt out husk. It deals with the question, can we be trusted with that? Should anyone believe that? Should anyone believe that we have finally learned our lesson? 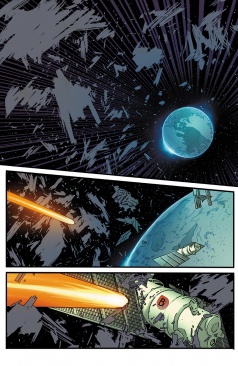 Juan, I know you just got done with “Ghost Racers” not too long ago, so how did the two of you hook up for this?

BT: Skybound put us together.

Juan Gedeon: Yeah, they put us together. When I was working on “Ghost Racers” I think issue 1 or 2 came out and I got an email from Sean Mackiewicz editor and he told me that if I was available after “Ghost Racers” and he told me the premise of the book. He sent me a synopsis and script and I said yeah. When they told me alien invasion, I thought something completely different. I thought the aliens were going to be monsters like District 9 or Oddworld: Abe’s Exodus, that kind of stuff and it was not. So I found out that it was going to be more grounded in reality,you can say, but it is great. When they contacted me I said “yeah” right away

BT: Thank you! We were super excited. He was like, “What about Juan?” I was like, “The ‘Ghost Racers’ dude?! Go after him!” and thankfully Marvel was sleeping, so we got him. We got him! They had him in the building and they let him go.

JG: I am glad I didn’t get to draw weird monsters, maybe that is not very marketable.

BT: There are some weird monsters coming up.

JG: Yeah, but not the main characters. They got to be attractive.

That is what I noticed about a couple of the preview pages I saw online. They are obviously aliens but they look pretty human too. How did you approach that from a design and from a story standpoint?

BT: From a story standpoint, it is one of the things that makes their planet attractive to us. They are maybe us minus 100 years. So they are a slightly more evolved, intelligent, reasonable version of human beings. So their planet is what ours could have been if we had gotten our act together and they are what we could ultimately evolve into. That was something great to play with. They are different from us appearance-wise and there are some physical differences that you’ll see  in the book, but we just wanted to tie it together. We wanted to make it as close as possible to really ratchet up the tension and play with this question. They have met the worse possible version of the human being and when they come here they think it’s a planet full of people like that. What happens to them and their mission and their relationships and their objectives once they start to realize that there are differences, but the differences aren’t as profound as they initially thought? That that can obviously be projected on so many things about living life and where the country is now, where we have become obsessed with our differences. We have become trapped in the things that we think make us so much different from them. It has turned into a “us and them” thing and so it is taking that idea and grafting it to the idea of invasion and colonization and all of those sorts of things but designs wise I don’t know.

JG: When I got  the first script, I got the character descriptions from Brandon and I learned the role of each character in the group. So one is stronger than the other and has more brute strength than stealth. The other one is more stealth than strength. There is one that is smart, intelligent and can control the gadgets and stuff. Brandon told me the color of the skin, one has blue skin, the other has lighter blue or darker blue, green and stuff and I went from there. The first one was the hardest to nail but then after that it was pretty easy, pretty natural.

BT: Yeah there were a couple of characters that got their full designs on the page.

JG: Yeah, and I try to keep their hairstyles pretty distinctive. 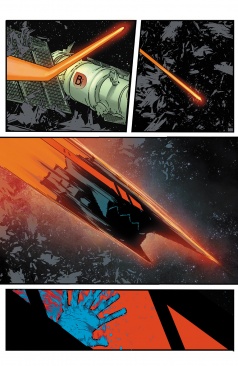 JG: My style is pretty simple – I don’t use a lot of rendering, it’s mostly open, not a lot of black – so I keep the silhouettes pretty distinctive. One is bigger, one is more lean and fit.

JG: Also with the designs, I try to keep them believable, realistic, but also cool. So I always think how would this look in a movie or in a TV show or in a video or game action figures? So if they pass that test, in my mind at least, then I send the design to my editor, to my writer, to the colorist, and we take it from there. If we have to adjust some stuff that’s fine. I think I am pretty easy going.

BT: Yeah, that is one of the things I love about Sean, our editor. One of his great strengths is team building. He can really take the temperature of the people that are working together, and say, “oh I think these two guys would get along.” Like it was pretty obvious that me and Juan would get along and that we would get along with Frank and Russ and all of the people that have come aboard the closer we get to the book actually being released. We are having fun, we are making comics. We’re making comics for Skybound! If you can’t get excited about that, if that doesn’t get you up in the morning, I don’t know what to tell you. But to me it is such an honor to me. When we get that first issue in our hands with the Image bullet on it and the Skybound guy, I am probably just going to die on the spot. So we have to make sure I have a bunch scripts in, so they carry on without me.

JG: The thing is that we have been fans of Image even before we started to get them in even before I started working with them. I don’t want to sound like a hipster, but I read “Walking Dead” and “Invincible” before there was ever a TV show.

BT: Reading “Walking Dead” when there were only 7000 people reading it.

Yeah, that’s what I was talking about with Ottley earlier. Twelve years is a long time.

BT: It’s crazy. One of the first comics I ever got was “Spawn” #1. So I came into comics with Image.

So it is a really good feeling.

BT: A lot of surprises in store.

What else can you tell us about the book?

BT: First issue is out July 13th. This man has done four, I have done ten. I start eleven on Tuesday, so we want to make sure that the book ships on time. So if you read it, you like it, you can count on it, rely on it to be out again in the next four to five weeks. So we can build some momentum and get this thing going and turn it into something big, something exciting. We would like to be working on this for a long time. So we are hoping, we are crossing our fingers that people love it.

I am looking forward to it.

BT: We get to keep going. There are so many layers to peel of the onion.

JG: I don’t know if we said this before, but the colorist is Frank Martin. The cover is by Jason Howard. It is an ongoing series, so hopefully it is going to be around for a while.

BT: It’s ongoing as long as you guys want it be to ongoing.