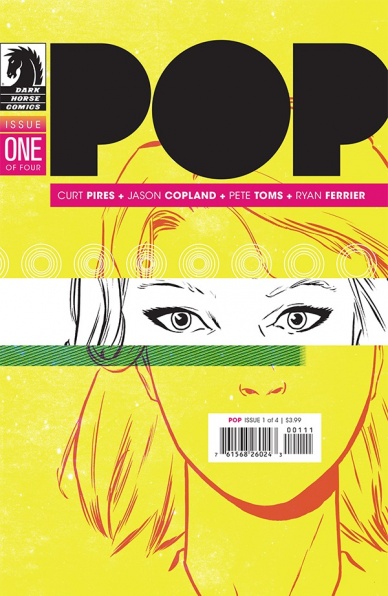 A long-time friend of the site, from his early days to his first breakout and that one time he gave us a comic about Kanye West to run, Curt Pires is a staple presence here at Multiversity. An upcoming writer in comics who produces smart and challenging works with some great collaborators, it’s always fun to talk about and help promote his new books with him.

So it only makes sense that we talk about his new book “POP,” right? Right.

Read on as we chat about all things “POP,” and be sure to grab a copy of the orderform at the bottom of the post to bring to your retailer next time you visit.

It’s been a while since we’ve done one of these, so I think it stands worth asking at the top: how’s it going, Curt? How are comics treating you?

CP: I’m doing really wonderful actually. Comics are treating me the nicest they’ve ever treated me and I’m enjoying it immensely. How are you doing Matthew?

Oh, I can’t complain. So lets get into the meat of this: what is the origin of “POP”? How did you end up putting this project/idea together?

CP: I actually had the idea for “POP” around the same time “LP” came out. People would ask me if I had any other ideas cooked up, and I’d sort of playfully mention something, that something was “POP.” It took a while to cook, to incubate, to force itself into existence but it did and it’s beautiful.

And how did you and Jason come together to work on it? I’m mostly used to Jason drawing giant robots and monsters, so this was certainly a change for me.

CP: Jason can basically draw anything. My first interaction with his work was the “Murder Book” stuff he did with Brisson. Jason’s really prolific as fuck. He’s just really starting to blow up, there’s so much great work is out there of his, so it feels great to be doing a book with him that is putting his abilities front and center in a big way.

I met Jason at FANEXPO Toronto in 2012, I think, just around the time I was putting “LP” out. He was tabling with Walsh and Brisson (so much Brisson in this interview) and he grabbed a copy of “LP” off of me. We stayed in touch and ran into each other at ECCC 2013, and ended up talking about potentially doing something together. Time passed, that “something” ended up being “POP.” 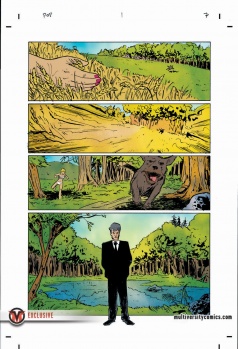 An excerpt from POP #1

How has your collaboration with Jason evolved throughout the time you’ve taken to put the book together, together? What has the back and forth been like for you guys?

CP: We’re really quite comfortable with one and other collaboratively. When Jason’s working on the pages we’re almost always on Facebook going back and forth running things by each other, asking each other questions, discussing. We trust each other. We’re both really open about ideas — the story is king, there’s really no ego involved in it. I definitely see myself working and collaborating with Jason for a long time to come.

From what I’ve seen so far the color aesthetic is a bit different from what I think we’re used to, with Pete Toms giving it a more grindhouse look. Is that a fair assessment of the intention and the overall vibe you were hoping to give with the book, or am I way off base here?

CP: The colors on this are sort of a jam on Pete’s signature neon drenched beauty and something more akin to the work Richmond Lewis did over Mazzucchelli on “Batman: Year One.” It was all Pete’s idea and it works brilliantly on the book. He’s really great to work with.

From my impression a lot of your work has been influenced by pop culture, but this book seems like its more overt in its critique of pop culture. How do you find where this book sits in your current oeuvre as it stands?

CP: This book is pretty openly a critique of pop/mass culture, but there’s also a celebration of pop culture inherent inside that critique. There’s an acknowledgment of the allure of this stuff — the sexuality of it — the stuff that attracts us as humans, makes us crave this way of being.

“POP” feels like the best thing I’ve done in a lot of ways. It gets away from the raw nihilism of stuff like “LP”/”Theremin” and moves towards the light a bit, but there’s still a darkness everywhere looming around the corner. I can see the Lynch influence on this, sometimes when I close my eyes and think of the book, I see blue neon and a busy city street, and a blur of motion, that reminds of Mulholland Drive for some reason.

You bring up Mulholland Drive, and that’s interesting to me because it does sort of beg the question: how important do you think the town “POP” takes place in is to the story? I mean, the male lead works at a place called “Dreamland,” which seems rather apt. 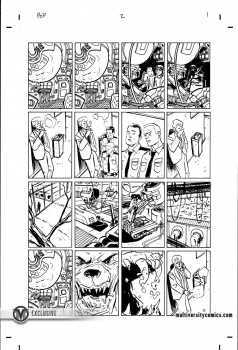 An excerpt from POP #2

CP: The town is really important to the story. It’s sort of the third protagonist in a way. Getting back to the Mulholland Drive conversation, and lets be honest if we’re having that conversation, we’re also having a Twin Peaks conversation, the work connects to these concepts in regards to embracing the idea of geography as a living entity. City structures, urban spaces as conduits for beautiful and horrific events. Being able to walk down the street and feel the energy that radiates off the concrete. Mulholland Drive and Twin Peaks were both effective because the geography made me feel things, made me feel like I was bearing witness to some ancient truth. “POP,” in that regard feels similar to me.

I think that our lives have always been fairly immersed in the world of celebrity, but certainly a more harsh eye has been turned to it now. Why is it, do you think, that we’re suddenly more inclined to burn our idols?

CP: I don’t know if there’s really a “harsh” eye being cast on it in general. We’re starting to see artists like myself and Harmony Korrine start to critique mass culture, in an exploratory way, sure, but I think in general the mass populace is still seeking this existence. I walk down the street and I still see men with their hair gelled up, wearing sunglasses they could only pay for using their visa card, with designer logo tee shirts on that were fashioned by a third world worker, puffing their chests out, trying to create some sort of MTV/Tabloid approved image.

Back when we were first talking about your work in “LP” and “Theremin,” your influences seemed relatively different than what they are now, as now you’re talking about guys like Lynch or Korrine. Given “POP’s” gestation period, can you talk a bit about how you’ve changed, how your influence has changed and, in turn, how this is relayed in “POP”?

CP: I’m always changing, I’m always evolving, and it feels like my work is too. My influences we’re definitely a little different in terms of around when “LP” and “Theremin” were both coming out, because I was at a different point as a storyteller/human. The people who were influencing me back then are definitely still influences, just to varying degrees. The evolution is reflected in everything. My universe is always expanding and reshaping around me, and the stories I tell are going to reflect that. 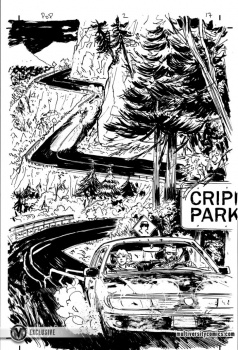 An excerpt from POP #2

The biggest way this is relayed in “POP” is I think tonally. “POP” still has as I’ve mentioned the “darkness” lurking around the edges, but in “POP” there’s a positive force, a light to contrast that, there’s a yin to the yang. There’s balance. Learning to accept that balance was a big part of the last couple years for me, so it’s reflected in the fiction I create.

“LP” and “Theremin” both read like books with you somewhat in them; in the case of “Theremin” #4, very literally. Where do you see yourself in “POP”? Or are you trying to be more removed from the equation?

CP: I leave parts of myself in everything I create. I think we all do. Every piece of art is a self portrait to a degree, it’s less obvious in this, as say, “Theremin” #4, where you literally have me as the protagonist of that issue, but it definitely factors in.

So given the two-fold nature of the book — both as a critique and celebration of the culture it focuses around — how do you find a book like this fits into the world of comics? That is to say: comics are certainly not bereft of similar idol worship, but “comic culture” is different than our proverbial understanding of “pop culture,” you know?

CP: Everything is everything. 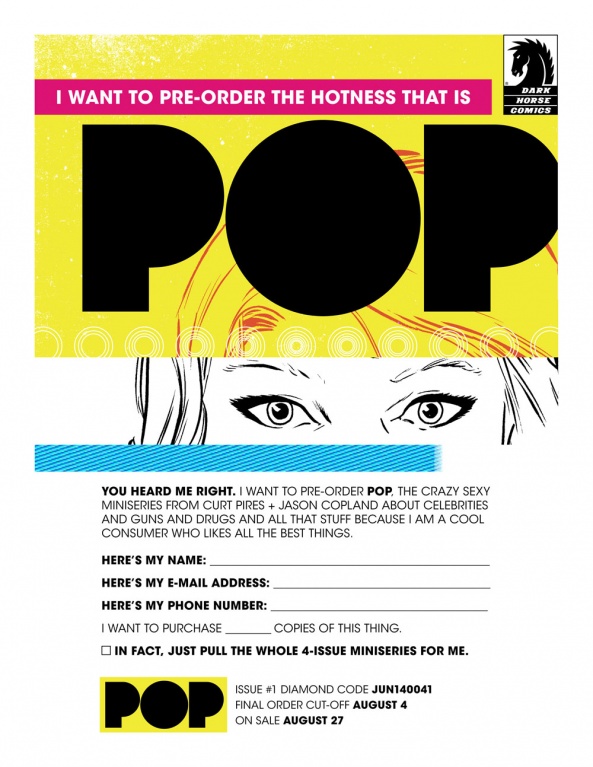