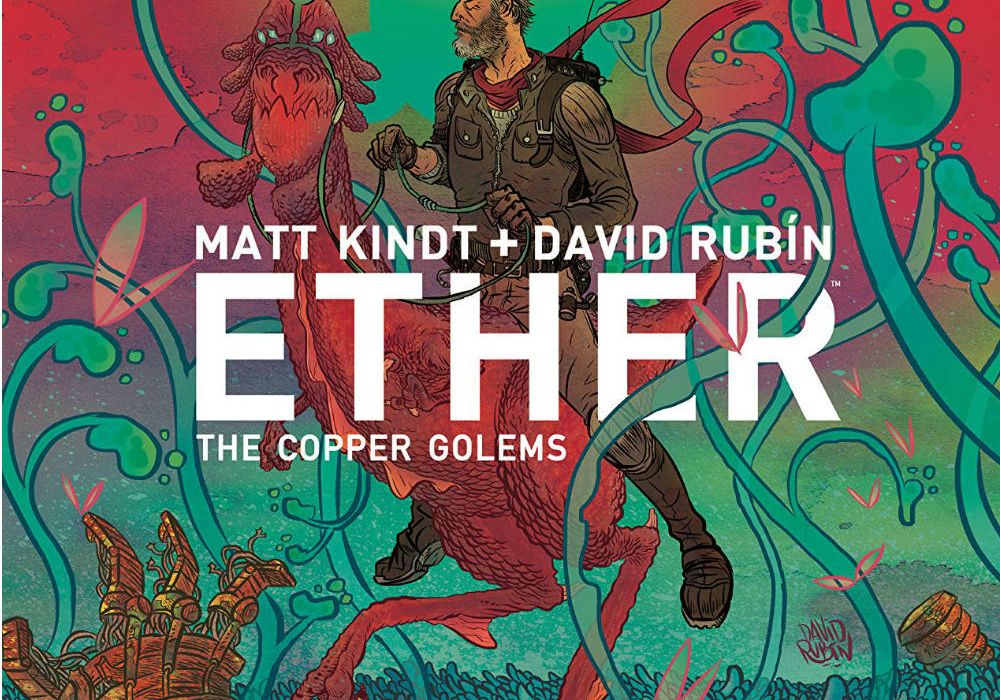 This past week creators Matt Kindt and David Rubín returned to the their creator owned series “Ether” with the next installment, “Ether: The Copper Golems.”  In this new arc, “Portals between Earth and the Ether begin to crack open unleashing devastating magical fury on our planet and only adventurer Boone Dias can seal the breaches.”

To learn more about “Ether: The Copper Golems,” series creators Matt Kindt and David Rubín spoke with us about what readers can expect in this new adventure, their experience as a creative team, and the possibility of a larger universe. You can find our conversation with Matt and David below, as well as three exclusive pages from the second issue, due out on June 20th.

Well first off congratulations on the first volume of a wonderful new series. Quickly for those maybe who just missed out on “Ether,” what is the series about?

Matt Kindt: “Ether” follows a science-minded adventurer, Boone Dias, is an inter-dimensional explorer, a scientist from Earth who has stumbled into great responsibility: he must keep Earth and the Ether separate. He’s got an explanation for everything, so of course, the Ether’s magical residents turn to him to solve their toughest crimes.

Really Boone just doesn’t believe in magic. Everything has a scientific explanation, so even when he’s confronted with a large talking purple gorilla and a herd of migrating sphinxes, he’s determined to explain it all in scientific terms. It’s a story about science and mystery and the friction when the two meet.

David Rubin:  “Ether” is a science fiction story with adventure, action, emotional drama, deep characters, and lots of humor. It’s like a mashup of “Valerian” comics, Kirby and Ditko stuff, and a Paul Thomas Anderson film, but directed by Terry Gilliam.

Now for those us who read and enjoyed the first of Boone’s adventures, what can we expect going into “The Copper Golems?”

MK: There’s going to be more of the same crazy action. If anything I think David and I ramped it up. Everything in this arc is much bigger, literally and figuratively. We have giant migrating sphinxes, haunted pyramids, and something super creepy in the Faerie Forest. But this series is also a progression for the character. He’s going to have to really face some hard truths regarding his family and daughters who he left on Earth. Time works a little differently in the Ether, so when we start this arc, we see that Boone’s daughters have grown up and we (and he) have missed their childhood. It’s another mix of high adventure, crazy myths, and an emotional sucker punch all at once.

What is the biggest difference as a creative team from that first arc to this new one?

DR: I completely agree with Matt. We really know each other now and have even met in person a few times. I think this helps the story because we’re more comfortable with each other, the characters, the world, and the overall story, too.

This new series explores a well-known place with previously established main characters, so we aren’t trying to build the world. We’re inside the Ether now completely, and we’re going to continue to expand the world to give the reader a new experience.

What hooked me hardest on the series was the surprise almost noir detective adventure style of the story. As creators what makes a good mystery and how have you blended that style into this world of the fantastical?

MK: The kernel of the idea for this series came out of my lack of enthusiasm for writing magic or fantasy stories. I have a kind of literal-mindedness when it comes to stories. I want there to be an explanation and a reason for everything. It doesn’t have to be explained in the story or to the reader but it all needs to make sense. For that reason, I’ve kind of avoided horror and magic elements in my work for my entire career. So it’s that (hatred is maybe too big of a word) that inspired me to come up with a character that is forced into a magical, mythologically driven reality and then have him try to make sense of it. The mystery and detective elements spring from that idea and also my childhood love of Sherlock Holmes. The ultimate rational detective.

DR: I’m not a big fan of the fantasy genre either, but I know it very well, like Matt, which makes our approach to the genre more fresh, less reverential to the clichés of the genre, and open to mixing other styles into the story. We want readers to experience a mixture of genres, feelings, and styles in one story.

In the first trade there is a sketchbook showcasing Matt’s sketches next to David’s. How is it as a creative team having that understanding both as accomplished artists in creating together for the series?

MK: There’s definitely a heightened mutual respect I think. And for this arc, I didn’t sketch anything. Initially, this was a series that I was going to draw myself, but before I could begin drawing it, I met David and ran the idea by him. He was super excited to work on it, and it worked with his schedule, and I honestly was more excited to see him draw this series than see me drawing it. And part way through the writing process of the first arc, David sent me a ton of preliminary sketches, and I ended up using a lot of his art for inspiration when I started writing the scripts — it’s definitely been a big give-and-take.

DR:  I love to work with writers who are also artists like Matt and Jeff Lemire. I also do both and have written and drawn a lot of my own books like The Hero that haven’t been published in the US yet.

I think there’s more of a fluid creative dialogue between writer and artist when both parties know each part of the creative process. The dialogue is very important too. I don’t want to receive a script that limits me to draw what’s written there. I like to discuss the story with the writer before, during, and after the scripting process. I want to feel like I’m building a story together, and I think Matt feels the same way. He really creates a very comfortable place to work and build the series together as one unit.

Boone as a character is fascinating in many ways and one of the most interesting traits to me is his devotion to facts and science. Obviously it’s so interesting because it still drives him in spite of everything going on the book. As creators how do you write and draw for man who is interacting with a world so surreal but he himself is unfazed and grounded?

MK: It’s pretty easy for me to channel a character who wants an explanation for everything. And as the writer, I have the explanation for everything. So in a way, I feel like I’m both torturing Boone and also myself. The crazier the idea, the harder it’s becoming for me to have him come up with rational explanations for things. The giant walking sphinxes . . . I guess maybe you can explain it with some kind of science  but there is a small detail in this series where Boon describes a gadget he was given, a compass that points towards adventure and mystery. Without spoiling it too much, he is obsessed with this compass and how it can consistently work. It doesn’t make sense. Eventually, he opens the compass up and . . . there’s nothing inside. I think that really gets to the heart of the series and this idea that the deeper he goes for answers, the more empty it’s going to end up making his life. Or maybe not. Maybe we just want to make a story with giant robot spiders, riddle-telling wizards, and super-angry faeries.

DR: Boone, with his rational nature in a magical world, is a constant source of conflicts, and conflicts move the story along. From my perspective, I try to approach the art to represent his mental state in every moment. For example, when he’s on Earth, the colors and atmosphere are muted tones, grey scales, dirty, and rough because that’s how Boone sees the real world. His reality on Earth is sad, cold, and hard. On the other hand, when he’s on Ether, everything is colorful and full of powerful sensations. I use color to help communicate how Boone sees this new, amazing world full of adventure, fun, mystery, and more clues than his rational brain could ever solve. On Ether, he feels like a hero who is needed, meanwhile, on Earth he feels like a loser.

The book constantly is refereeing a bigger history and scope of world. Both of you have dipped your toes into Lemire’s Black Hammerverse. With the success and quality of building his world out in additional titles is that something you could see happening with “Ether?” Then we could have a big Black Hammerverse, Mignolaverse, Etherverse-cross event.

MK: Yeah, honestly I could see it. We’ve really populated the world with a lot of characters that could hold their own in a solo book. I’d love to read a series about a big purple talking gorilla . . . let’s do it!

DR: That would be wonderful, I hope so! Our fans and the sales numbers have the last word on if we get to explore this world further. If an “Etherverse” would be possible, I’m pretty sure that Matt and I are ready for it. The Etherverse could be as big as our imaginations, and believe me, if imagination were money, Matt and I would be millionaires!

When I read “Ether” it feels like a book that is the best parts of both your creative talents. The cerebral nature of story and themes, the vast unique world and characters with clear motives and fun personalities. What is about this series that interests you the most as creators? Has that changed going into this new arc?

MK: I think having David draw this series changed it completely. What I had envisioned when I was going to draw it was something . . . much less fun. It was a lot darker and kind of dower really. But David’s art — his character and acting and color — it’s impossible to not make a book that isn’t super fun. I think that ended up being the secret sauce in this collaboration because it still has a super sad beating heart underneath it but the color and fun disguise the true darkness underneath and makes it fun to read. I don’t think there’s anything else out there like it and all credit to David for transforming this into a new kind of book.

DR: “Ether” is a story that allows an artist to put everything they have into the story. Matt’s scripts are truly a gift for an artist because they allow me to grow my work, to try new things creatively, and to search for new ways to create my art. It’s truly wonderful!

I am very grateful to Matt for trusting me to do this story while also giving me room to come up with my own ideas to add to the series. I hope that fans enjoy “Ether: Copper Golems” at least half as much as Matt and I enjoy working on it because that means our hard work on the series will pay off. 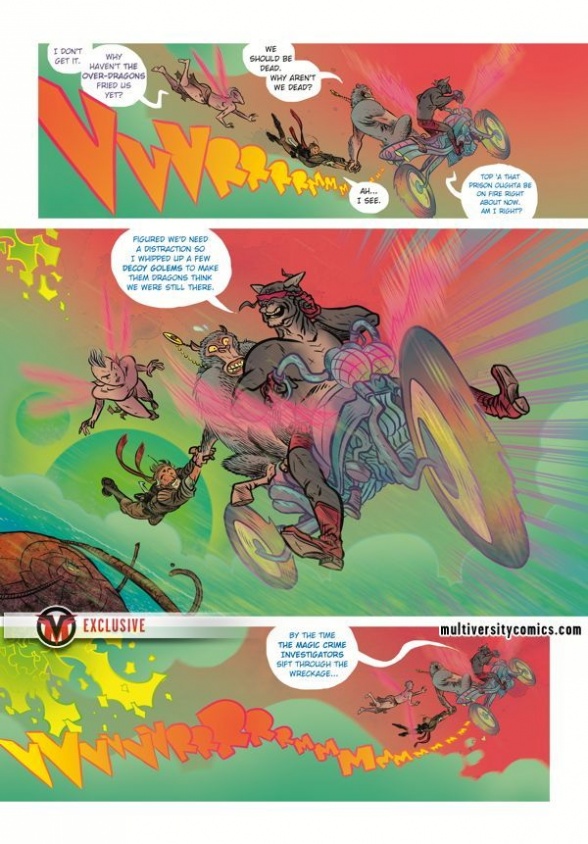