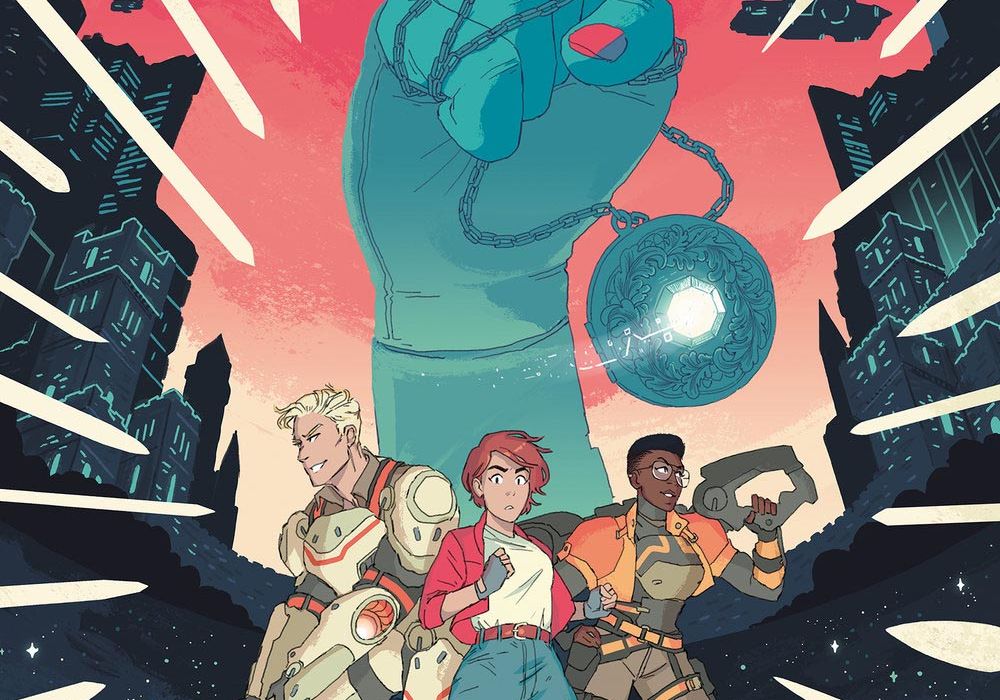 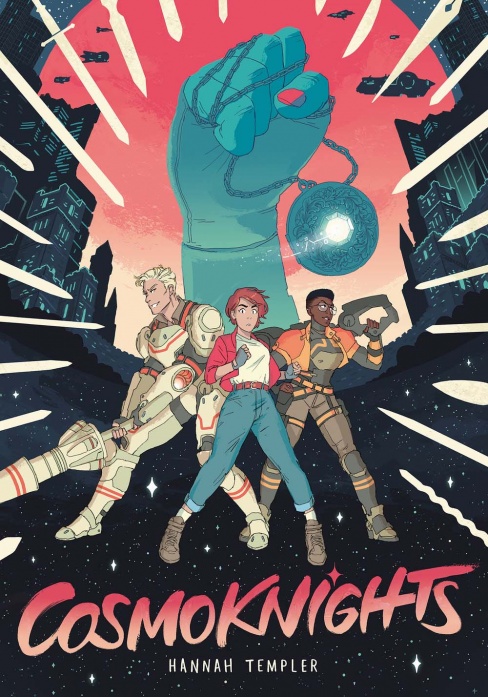 Cosmoknight Cover
Sometimes the princess is in another castle and sometimes the princess’ fate and favor is determined by a neo-medieval battle of knights in mech suits. The latter scenario describes the tradition established in the series “Cosmoknights.” Much like that game featuring the mustachioed fat plumber(who has to smell right? He climbs around in pipes), the princesses lack any real agency or choice in their own life. That does not sit well for a young girl named Pan and a charismatic pair of off-world female lesbian gladiators who are looking to destroy the system by any means necessary. “For this ragtag band of space gays, liberation means beating the patriarchy at its own game.”

Created by Hannah Templer and launched as a web-comic in March 2019, “Cosmoknights” was released as a full-color graphic novel this October, published by Top Shelf. To find out more about this new collection, the series, and bad ass women doing bad ass space stuff we at Multiversity were lucky enough to be able to speak to creator Hannah Templer about “Cosmoknights.”

Below Hannah talks about launching the series as a webcomic, building a neo-medieval world, drawing mech battles, and more. A huge thanks to Hannah for taking the time to answer out questions and be sure to look for Hannah’s book “Cosmoknights” in stores and online now! 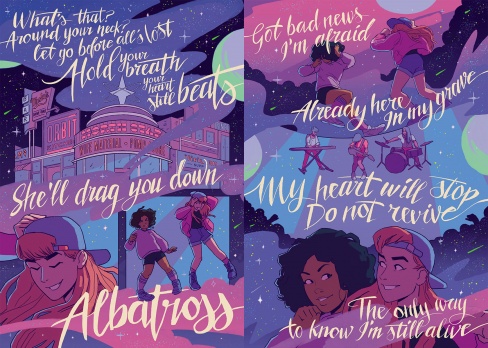 I have seen “Cosmoknights” summarized many different ways and having read it more than once myself I think my summary would differ and has changed with each reading. How would you summarize the series and what is this series about you?

Hannah Templer: Well, the story is about a young woman who leaves home to join a pair of lesbian space gladiators on a galactic adventure to defeat the patriarchy. But I’d say “Cosmoknights” is really about finding and fighting for your queer identity as a woman in a society that was built without you.

I originally found the series as a webcomic and have since reread it in the collected trade format. There is something really interesting about the two different formats and where they overlap and where one works better than the other. Reading the trade you can really see how well you have accomplished both. As the creator is there a difference in the approach for you between the two? Were you aware/planning for it eventually to be collected and read in print?

HT: I always planned for “Cosmoknights” to be in print, even before I had a publisher– there’s something really special about holding a comic book in your hands. But I also love webcomics for the serialized format and audience interaction – there’s a lot to be said for the pacing of episodic narratives, and releasing a few pages at a time allows readers to linger a little longer. My approach doesn’t really differ between the two formats (other than technical specs), but I will say planning for weekly installments did push me to regularly include a story beat or special visual (a splash page, an unusual layout, etc.) to keep each update interesting. This is actually something I now try to apply to all my projects, regardless of format.

Does creating it for the release schedule of the web where you are putting up a page or chunks allow you to experiment more than say a monthly title schedule? I guess to follow that up, have you been experimenting more?

HT: I approached “Cosmoknights” as a complete work, so the whole thing was done before I started posting it online! There was definitely experimentation in terms of deciding how to divide up the pages to best tell the story, but most of that happened in advance. 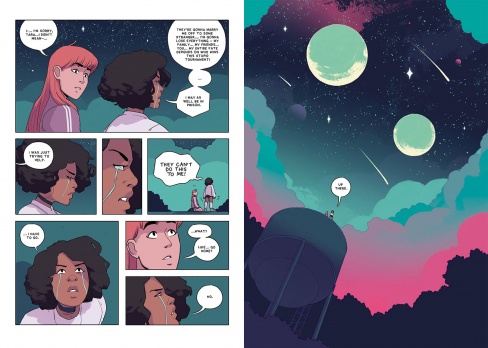 I think early on the biggest twist for me was after the intro the series went to focus on Pan. We see this princess running away from her destiny to the stars in this last second escape and I thought this is the start of our heroes adventure but the story stays with Pan. Was the idea always to focus on this as Pan’s story? What makes Pan an interesting character for you to write and draw?

HT: This is actually something really key to “Cosmoknights”– in this story heroism on a grand scale does exist, but it also exists in the day-to-day. It was important to me that this story stayed focused on someone like Pan, who is not royalty, doesn’t have super powers, and isn’t necessarily destined for greatness. Although the scale of her story will grow as the series unfolds, ultimately she’s just a woman who got separated from her best friend and is trying to make the galaxy a better place.

Pan is really great because her exploration of the galaxy runs parallel to her foray into queer identity– her ring of keys moment coincides with her quest to dismantle the patriarchy, meaning we meet her when she’s still a super green gay disaster. She’s a lot of fun to write because she’s going on two journeys simultaneously and has no idea what she’s doing (relatable).

I work a few hours a week at a Barnes and Noble in addition to my 9-5 for some extra cash but mainly the discount. It has been really fun to see the young adult fantasy genre grow especially including graphic novels like ones from authors Faith Erin Hicks, Tillie Walden and Emily Carroll. “Cosmoknights” fits very much, I think, into that market and it is personally something I have found myself recommending to readers I interact with. Why do you think this genre and market of sci-fi/fantasy/adventure for young readers and a majority being young woman has grown so much?

HT: In my experience, women have actually been in this genre for a long time, but in self-published capacities (webcomics and fanfiction)– I think the uptick is not necessarily reflective of massive growth in interest as much as it is a sign of opportunity and invitation.

The series has a really well paced reveal of the sci-fi elements of world. Even once its established this takes place in a world with space travel you seem to pull back and take your time before revealing too much. Does that help to ground story and characters for readers?

HT: I like building my stories around characters, so world-building tends to get introduced naturally. In “Cosmoknights,” we’re following characters who have lived their entire lives in this galaxy– none of them are time travelers or explorers finding alien worlds– so anything unremarkable to them will be unremarkable to us. I also love sci-fi to feel lived in and authentic– if it’s too complicated to explain situationally, it probably doesn’t warrant explanation at all. 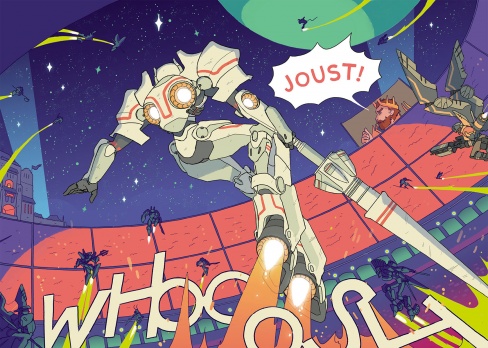 Much like the slow reveal of this sci-fi fantasy world the series merges styles of today and tomorrow seamlessly. When you see Pan hanging out she looks like a stylish teenage girl of today but she is also walking down this street with space ships in the background, neo-noir city lights and advertisements for mech suit battles playing on the TV. What is your overall approach and guideline for the creation of this world and its aesthetics?

HT: The question that drives my worldbuilding is: “in a universe torn between futuristic technology and antiquated ideals, who gets to be advanced?” Someone like Pan, a young woman from a quiet suburban planet, has origins that may look familiar to us. But as soon as you start exploring class divides and political power, things shift dramatically. The central characters of “Cosmoknights” subsist on the edges of a society that was not built for them, hence the merging (and often clashing) of worlds.

This is a series that contains really thoughtful well rounded characters. A story of a young woman’s coming of age journey to find who she is, her place in the world and the woman she loves. There is a weathered loving couple who against all odds risk everything to free oppressed princess to allow them to make their own choice about their life and body. Oh and it has probably come of the coolest fucking mech suit fights I have read in a comic in a long time. How and why do these two genres intersect for you?

Without getting into the technicalities of what dictates the mech genre, I will say that repossessing bodily autonomy via mech-suits is one that makes a lot of sense for this story. On one hand, of course I think mechs are cool (who doesn’t?), but Cass’ reclamation of her independence via a shell that literally liberates her physical body is not insignificant.

While mech-suits and gladiatorial jousting are not truly the lodestone of “Cosmoknights,” they parallel the ferocity with which queer women fight and advocate for themselves on a daily basis.

Is there another creative muscle you find yourself flexing creating the mech battles?

HT: They’re incredibly difficult to draw. I have learned a lot since the first volume and am excited to keep growing, but (surprising no one) it’s really damn hard to maintain clarity while drawing multiple tiny mechs bashing into each other on a page. I’ve leveled up in efficiency of line and color to get through these scenes. 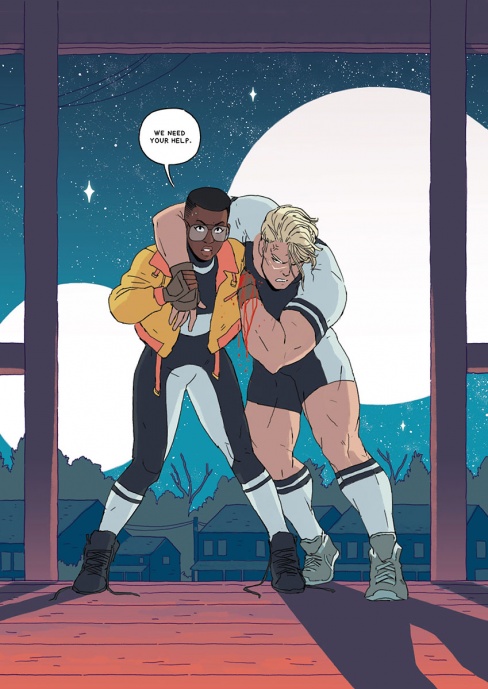 “Cosmoknights” reads like it is a well blended mix of your interests, influences, personal life, and beliefs. Is there another personal interest and genre you would like to tackle in the comic medium?

HT: “Cosmoknights” is definitely my dream project and I will always make room to work on books like it, probably for the rest of my career. That being said, I want to try lots of new things– memoir, historical non-fiction, young reader books, gag strips… all of it queer, of course.

HT: The idea of found family is super central to a lot of queer experiences– a lot of us have found family to thank for being safe and alive. Whether your found family replaces your birth family or exists alongside it, the people you choose to surround yourself with mold who you are and the impact you have on the world, and are worth fighting for.