This month sees the release of “Revolution,” the first ever art book featuring the work of Bill Sienkiewicz. He’s an artist that has done it all in the industry, from inking some of the all-time greats, to being one of the most evocative cover artists of all time, to pencilling a murderer’s row of comics, to writing a few himself. His style is both adaptable and totally unique. He’s, hands down, one of the modern masters of sequential art.

In celebration of his book, a number of his fellow creators have told us why Bill is such an indispensable member of the comics industry. Enjoy their praise of Bill, and make sure to pick up the book in finer shops everywhere. 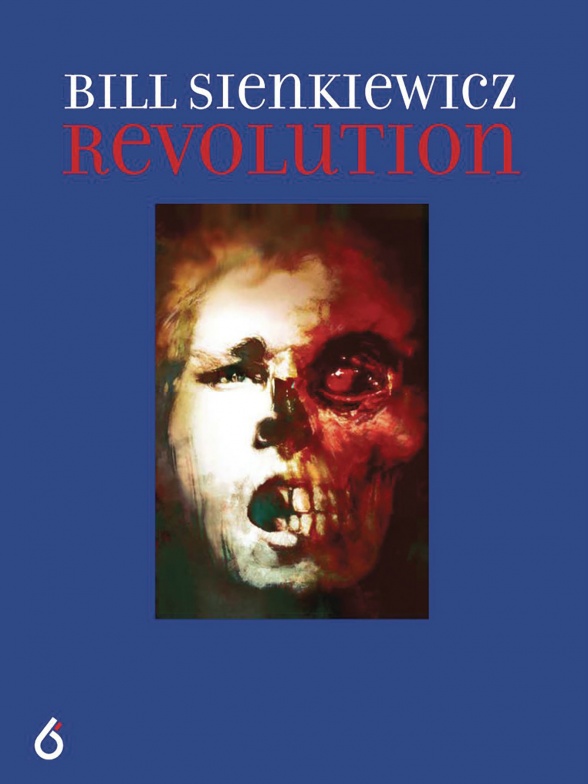 “He is Bill Sienkiewicz, and he’s up on the pedestals already. He is acknowledged. But my hope is that a book like this, filled with Bill’s art all in one place, will show people who think they know what Bill can do, exactly how much more he can do than any of them had ever dreamed.”
— Neil Gaiman, author of The Sandman

“I am an illustrator, a comic creator, a painter. I’m classically trained. I know how to do a few things. But man, I WISH I knew how to make paint and pencil and ink and any other drawing medium do what Bill Sinkiewicz makes it do! His work is magic. He is an art magician, weaving spells with a pencil and brush and pen. Things that other people would agonize to create flow effortlessly out of him.  His work changed what people expected out of comic storytelling and sequential art and made it possible for everyone who wanted to use paint as their medium of choice to pick up a brush.  To look at it is to experience energy on a page. I am constantly in awe of him, consistently inspired and revitalized by the amazing art he creates.” —Jill Thompson

“What Bill does is Magic—A truly insane kind of magic. I don’t know any other way to describe it. He is amazing and I have been in awe of him pretty much forever.” —Mike Mignola

“Bill Sienkiewicz’s work connects to people on an extra level. It engages your mind to feel the five senses, and manages to unlock an extra sense or two in the process. There is so much thought and feeling encrypted into Bill’s work, which the viewer’s mind has to unpack, to percolate on it … rise to the challenge of it. His work is engaging in the way that art is supposed to be … you feel changed.
In my first interaction with Bill’s work, I realized that it was making my world bigger. Bill has now inspired generations, with countless ripple effects. Bill Sienkiewicz asks you to think from a new perspective, to broaden your mind. His work asks you to see things in a new way. Or if you are in the creative arts, it forces you to ask if you’re pushing your own work enough.
These books are a wealth of education and inspiration for generations of artists and readers to come.”
—David Mack

“It’s a strange thing about Bill Sienkiewicz: that you can call him the finest artist in comics and still somehow be underselling it. I’ve never seen a piece of work by Bill that didn’t make me stop whatever noise is going on in the world and my own brain just to marvel at it, to soak in the intelligence and heart. You don’t just observe Bill’s work, you live it, and I’m grateful there’s a guy out there who strives so damn high.” —Gail Simone

“Bill’s work is an amalgamation of the best illustrators of the past mashed together to create something innovative, lush, and sensational each and every time. He is one of the few illustrators today that can actually capture what a dream feels like, and at the same time remind us of the simplicity and power true art can express. The real genius of his art is getting to know Bill himself and understanding only a generous and accessible person can truly be in touch with the world around them.  Bill’s art is a true reflection of his spirit and this comes through each and every time. He constantly inspires me to work harder at my craft and I feel so lucky to consider him a friend.”  —Jimmy Palmiotti

“Bill has probably the hardest name in our field to pronounce and it is a tribute to the respect and reverence with which he is held, that in my experience I have never EVER heard anyone mispronounce Sienkiewicz.” —Geof Darrow

“Pretty sure when the devil was done with Robert Johnson, he decided he had room for one more deal. Then up walked Bill Sienkiewicz… Not sure how else to explain what he is able to do.”
—Kelly Sue DeConnick

“Bill is the ultimate artist. He’s not afraid of getting his hands dirty if that’s what it takes to get the visual results he’s after. He’s the living proof that there are no boundaries for what an artist can do in comics.” —Gabriel Bá

“Bill’s work always pushed further how expressive comics could be, incorporating different techniques and materials to the most unexpected results. His work is one of the most emotional pieces of art being produced in any creative medium.” —Fábio Moon

“When I saw Bill’s work for the first time something connected, I felt inspired that an art style so expressive and experimental could work in comics, this unique flavour as it were. Where style is signature to hysterical levels. I believe in the term ‘artists put their souls into their work’, that it is an extension of themselves. I would just look at the art and bam!  “Ye that’s Bill’s work!”  It’s an identity, that is him.

Bill has this amazing ability to put his own unique mark, vision into anything and everything his imagination touches, it is just magic, that is it. One can instantly recognise the subject but now the artwork itself is talking with new layers and a new perspective. His rendition of Batman blows my mind. As I read through Voodoo Child it felt like I could actually hear Hendrix’s music and feel that energy that is SO Hendrix, emanating from the pages. Bill did that, it’s insane.

I had the pleasure of meeting Bill for the first time in 2018. It was my first time in America, my first time at THE San Diego Comic Con. It was so overwhelming. I had drawn a Demon Bear and I wholly wanted to give Bill the art as a gift of thank you for I find words not enough, I cannot find the words powerful enough to express. So I feel that the art will do what words cannot. I was nervous, so nervous. I just remember him seeing the art and his face just lit up! So much utter respect for a man whose art I could identify with made me feel that I could pursue a career in comics myself and I find myself doing that very career today.” —Abigail Jill Harding