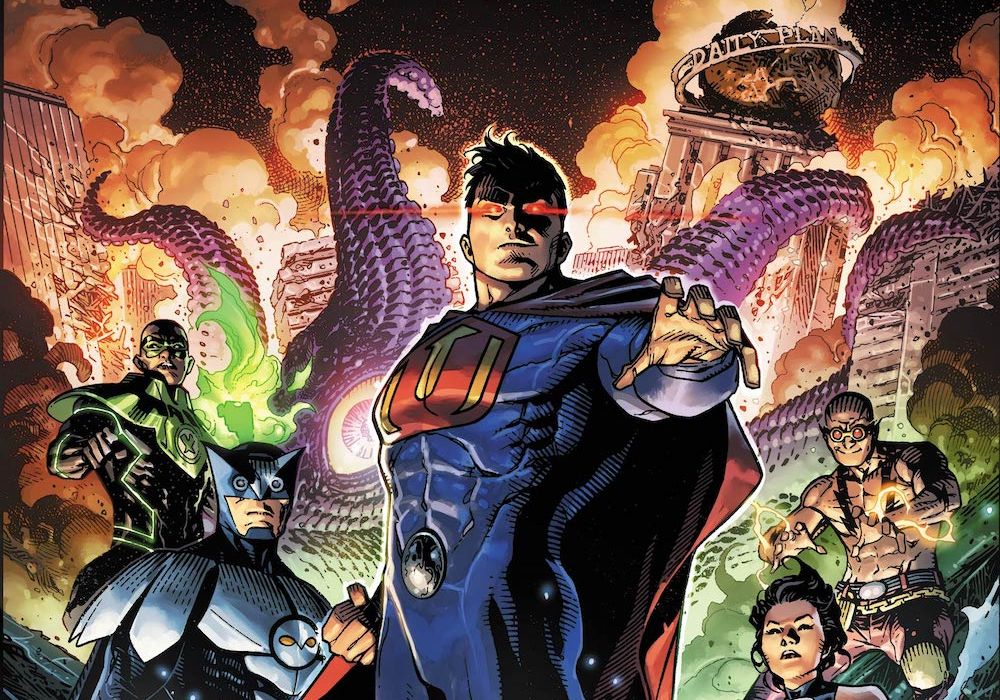 For some time now, we’ve been hearing about how “Dark Nights: Death Metal” was going to be shaping the future of the DC Universe, and today, we have the first official confirmation of that with the announcement of “Crime Syndicate.” The six issue miniseries by Andy Schmidt (“Challenger Deep,” “G.I. Joe: Future Noir”) and Kieran McKeown (“Wonder Woman,” “Aliens: Rescue”) is set on the ‘new’ Earth-3, and features an updated version of that planet’s Justice League analogues who, in case you’re unfamiliar, are actually evil monsters. 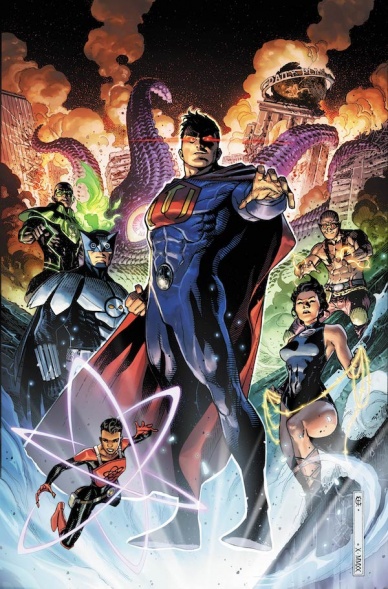 We had a chance to ask Schmidt, a veteran editor and founder of Comics Experience, a few questions ahead of the announcement. After our interview, you can find the press release on the book, which gives a little more context to the series.

Thanks to both Andy Schmidt and DC for the interview opportunity, and make sure to pick up “Crime Syndicate” #1 come March!

Andy Schmidt: I first saw them in DC’s “Crisis on Infinite Earths” #1 in which they defend their world, but it is ultimately doomed. I was fascinated by them. I had to know more—they were mean and evil and tragic all in like 8 pages. Absolutely fell in love with them.

I’ve followed them off and on ever since with some notable highlights—most recently the “Forever Evil” event and of course Grant [Morrison] and Frank [Quitely]’s “Earth 2” graphic novel.

I guess that means I’m a fan but I’ve also thought that there was a lot more that DC could do with the characters and the world if they wanted to…and I hope we will show some of that potential in this series.

I love the way the press release states the various team members: A paranoid titan, a narcissist, a nihilist, a broken moral compass, a sociopath, and a sadist. Which of those lovely personality types has been the most fun to dig into?

AS: Oh, good question. I am really enjoying writing a Superman character as a grade-A jerk. Not going to lie, it’s less about him being outright evil and just being about the worst human I can imagine—and then making him worse because he’s unstoppable. Ha ha!

I find writing the sociopath and the sadist to be kind of disturbing. But hopefully that means I’m writing them correctly.

Super Woman has definitely tuned into a favorite, especially when she interacts with Ultraman. There’s a healthy back and forth between them that’s really fun.

I’ve found that as I get further into it, and I think series editors Alex Carr and Marquis Draper would agree, Emerald Knight is becoming more and more engaging and readers will see that coming to light in the later issues of the series.

Kieran McKeown is an artist that our readers may have seen doing “Halo” and “Aliens” comics, as well as a few issues of “Wonder Woman.” For those that don’t know Kieran’s work, what makes him a good fit for this title?

AS: I’ve known Kieran for years. We’ve worked together before, too. I love him and I love his work—but he absolutely excels at facial expressions and character nuance. He’s in rare form when selling emotions and expressions—so while this book is written with big things happening—worldwide events—I’ve tried to give him opportunities to also show off how good he is at bringing out characters through mannerisms and expressions. I loved his “Aliens” work, and I’m glad he’s getting to spread his wings further here. I’m so glad he’s a part of it!

As the first writer telling a story set in the ‘new’ Multiverse, how familiar will both the settings and denizens of Earth-3 be to readers?

AS: I really tried to stay true to the core of our main cast. As we move out from them, we take more liberties. For example, Owlman has been a nihilist for quite a while—that’s still there, but his base of operations—the Owl’s Nest—has a few surprises in it, like the dead bodies of his victims. Or the fact that he has a group of villains called The Talons at his command that run Gotham City when he’s not around. The tropes around the characters may change a bit, but no one who’s familiar with these characters will be lost—but hopefully they’ll also be very pleasantly surprised by the new that’s coming into the familiar. It’s always a balancing act, but I think we’ve done a nice job of delivering what readers want while sometimes defying certain expectations.

Is there another multiversal Earth you’d like to play around on?

AS: YES. I’ve said publicly before, Jack Kirby’s ‘Fourth World’ is my jam. Let me at ‘em, coach!

Or WWII era JSA—would love to do a book set in WWII with the JSA or All-Star Squadron!

Oh boy, there are so many! I love the alternate universe type stories—those are always super fun for me.

Spinning out of Dark Nights: Death Metal, the DC Multiverse is reborn, and with it a new Earth-3!

What if the Justice League decided to rule the world instead of protect it?

A paranoid titan (Ultraman), a narcissist (Super Woman), a nihilist (Owlman), a broken moral compass (Power Ring/Emerald Knight), a sociopath (Johnny Quick) and a sadist (Atomica). Does the world stand a chance?

Spoiler alert: No. No, it does not. Writer Andy Schmidt and artist Kieran McKeown will launch DC’s new Crime Syndicate mini-series on March 3 to tell the origin of the evil Justice League from Earth-3!

Spinning out of the pages of Dark Nights: Death Metal, the DC Multiverse is reborn, and with it a new Earth-3! Witness the true origins of the malevolent makers of mayhem known as the Crime Syndicate as a common foe unites them! But how long can alliances last between villains like these?

“Kieran and I were given a once a lifetime opportunity to build a world from the ground up,” said writer Andy Schmidt. “We’re establishing the Crime Syndicate’s origin story for the first time—how and why they came together. And we’re not taking it lightly. You’ll find that you’ve entered a fully realized world—this is the story of the Crime Syndicate, but it’s also the story of Earth-3 and it moves fast and pulls no punches.”

Also in this debut issue, witness the origin of Ultraman in our special backup story drawn by super-star artist Bryan Hitch!

CRIME SYNDICATE by Andy Schmidt and Kieran McKeown is a six-issue mini-series debuting on Tuesday, March 2, 2021, with a cover by Jim Cheung and a variant cover by Skan. For more information on the Crime Syndicate and the World’s Greatest Super Heroes, be sure and check out DC’s website at www.dccomics.com, and follow DC on social media at @DCComics and @thedcnation.