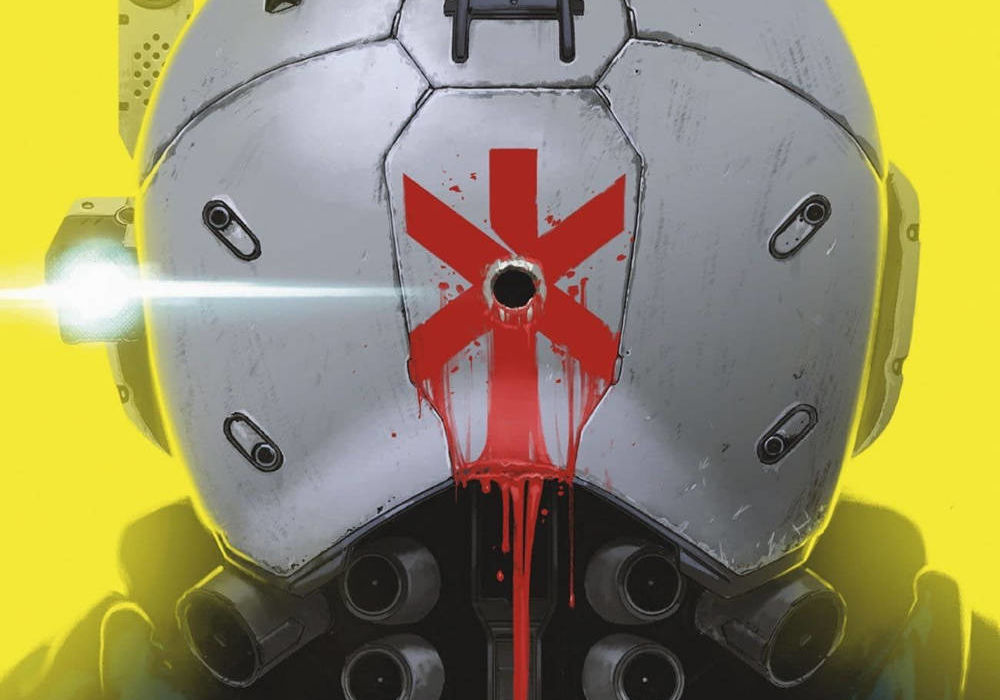 The role-playing game Cyberpunk, also known as Cyberpunk 2020 to distinguish it from the eponymous genre, has been a popular setting for many people’s tabletop gaming experiences in the realm of science fiction. With the imminent release of the video game Cyberpunk 2077 by CD Projekt RED, the same company behind the wildly popular The Witcher video game adaptations, there is more interest than many away from the tabletop had for information about this corporate nightmare of a world. Much like with the aforementioned The Witcher, Dark Horse Comics has a new miniseries set within the game’s setting of Night City, “Cyberpunk 2077: Trauma Team.”

Thank you to writer Cullen Bunn and illustrator Miguel Valderrama, who helped us to plug ourselves into that world ahead of the release of the comic. 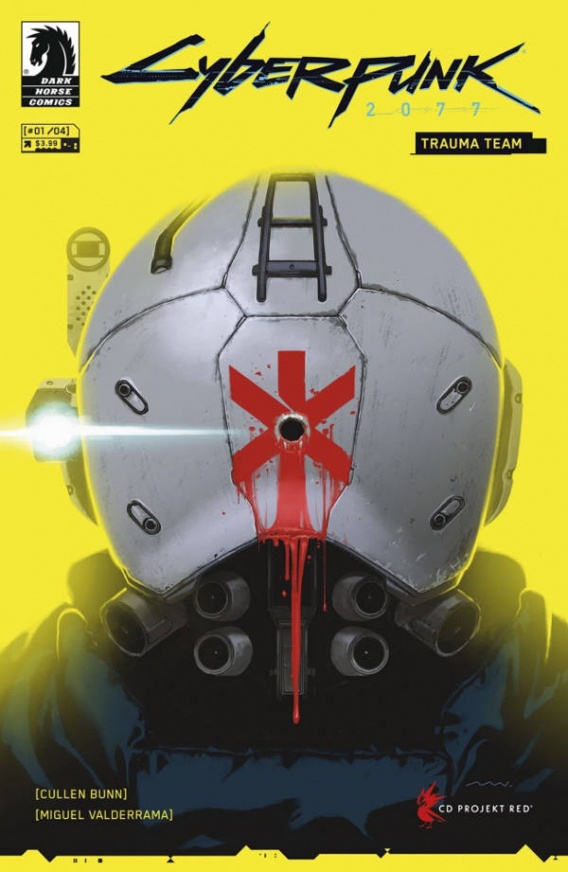 How would you both explain the general concept of this series, without spoiling anything? Elevator pitch, or more if you prefer.

Cullen Bunn: Trauma Team is a squad of elite medical and rescue technicians, expertly equipped and heavily armed. Their clients pay for extraction and treatment when they get themselves into hot water. Nadia is a member of Trauma Team, but she has experienced a great deal of pain and suffering herself. In her last mission, she managed to save her patient, but the rest of her team ended up getting slaughtered. She’s now been cleared for active duty again, but the memories of that day haunt her. And she needs her head in the game. The patient they are going to rescue is pinned down by a ferocious gang of killers, trapped in a towering skyscraper-turned-deathtrap.

As a role-playing franchise, Cyberpunk has been around since 1988, with the latest edition released in 2005. Even beyond that, the counterculture “cyberpunk” genre has existed for even longer, with such media as the writings of Philip K. Dick and later William Gibson to Akira, Blade Runner, and Judge Dredd, to name just a few. How much did the ideas of cyberpunk, from the game to the eponymous genre, influence your take on “Trauma Team?”

CB: I was playing the Cyberpunk role-playing game back in the day, and I was reading Philip K. Dick and William Gibson long before that. My personal take on the cyberpunk dystopia has been taking shape for decades, drawing from bits and pieces of my favorite interpretations. There’s been this nightmare city in my head for a long time and, while it’s not exactly the Night City of the Cyberpunk 2077 world, I think they’re cousins.

Miguel Valderrama: Some of those books and movies are my favorites works of all time so I can’t deny the influence, but for this comic, I got more influence from heist or police stories than the genre itself. The cyberpunk part is more in the details and social critic.

Conversely, how do you see “Cyberpunk 2077: Trauma Team” as a part of cyberpunk itself, from how it may interact with players of the upcoming video game to how it may shed a light on other aspects of a futuristic world common to the genre?

CB: To me, “Trauma Team” encapsulates the idea that life is cheap in Night City. Only those who can afford it get the assistance of Trauma Team. Everyone else can kick bricks. Talk about a grim reality. The world’s so violent that a mega-corporation has risen with the sole purpose of providing emergency medical assistance and evac when you get gunned down in the street. And there’s enough business that they are flourishing.

MV: I think that this kind of little stories elevate the world of the game, it makes you think that something happening everywhere at any moment. And seeing the team, how they struggle with the system as everyone else, makes the dystopia more believable.

Trauma Team International is a fixture in the world of Cyberpunk 2077, as people keeping an eye on the game’s development have surmised, not to mention people who know the franchise lore. When does this story take place with regards to the rest? Did you have a set time period in mind relative to anything to happen in the upcoming game, or did you just tell a story that fits somewhere else in the same world?

CB: In my mind, this story takes place during the same timeline as the game. It’s just another story playing out somewhere in the shadows. It has a kind of evergreen quality as it is not bound to any events of the game. It’s a story that readers can enjoy whether or not they play the game, really. We just wanted to show off that there is more going on in Night City than you realize. If we do more stories, they might focus on different characters and different aspects of the Cyberpunk 2077 mythology.

For Cullen Bunn: You have dealt with dark subjects before, from “Sinestro” and “Magneto” to “Harrow County” and “Manor Black.” Which of your stories do you feel would be the most similar to “Trauma Team,” from a general tone to any recurring themes, or anything else you can think of?

CB: Hmm. That’s an interesting question. I don’t usually think about shared tones. I just try to find a mood that fits the tale and go from there. This is a dark, gritty story, and although it takes place against the background of this massive world, it is pretty grounded. In a lot of ways, the first few issues of “Magneto” might be similar, focusing on this smaller, very dark event that is taking place in a much bigger world. It’s a deliberate story, with a very wounded character taking center stage. There’s a lot of intense action coming at the reader, but the character’s… trauma (pardon the pun)… allows us to see multiple sides of the conflict. And, although this is a sci-fi story through and through, I used some of my horror muscles, too. The stuff the Trauma Team encounters is harrowing, to say the least.

For Miguel Valderrama: Seeing the different setting of this series, did you change anything about how you dealt with the illustrations in comparison to your other projects, particularly “Hunters” and “Giants?”

MV: Yeah, I always try something different with every new project. Hunters and Giants are very different in the line work and coloring, but both have a cartoony approach, more juvenile, with Cyberpunk I wanted to be a bit more grounded and dirty, as the story is really crude and violent. Is the first time I’m not coloring myself, so I tried my best with the inking, working a bit more with shadows and textures.

Considering the very unusual position Trauma Team International has in comparison to other medical operatives in fiction, being essentially a medical private military corporation with no qualms about killing to get to their client, this series is definitely not the standard fare for those expecting medics from other franchises. With a world as cynical as this, are there particular things you two are especially excited about exploring in “Trauma Team,” from concepts to other mega-corporations or anything else?

CB: Our lead character, Nadia, offers up an interesting dichotomy. She is not necessarily a cynical person (by Night City standards). She actually wants to help people. She wants to treat the sick and injured. But that isn’t her job. Her job is to treat those who have paid for TTI’s services. What happens if she is treating a client and sees an injured child nearby? She might want to do one thing, but the job—and her teammates—might have other goals. What happens if she is assigned to rescue and treat someone who doesn’t deserve to be rescued? I think a lot of people will be able to understand being caught between what’s right and what your job requires of you.

MV: This story sums up almost every aspect of the medical system, but living the times we’re living, what would they do in a pandemic? It couldn’t be more Cyberpunk.

Is there anything else you both would like readers and/or fans to know about this series?

CB: This is really just the tip of the iceberg… the black iceberg… in terms of what we could do in this world. It’s one story in one of the shadowy, out-of-the-way corners of Night City. The potential for more stories, more characters, more action, more strife, more horror is unlimited, really.

MV: It wasn’t planned to be made during a pandemic, but the story is pretty relevant to these days. And If you see the Trauma Team in game, be humble, they really go through some serious stuff to get you out safely.