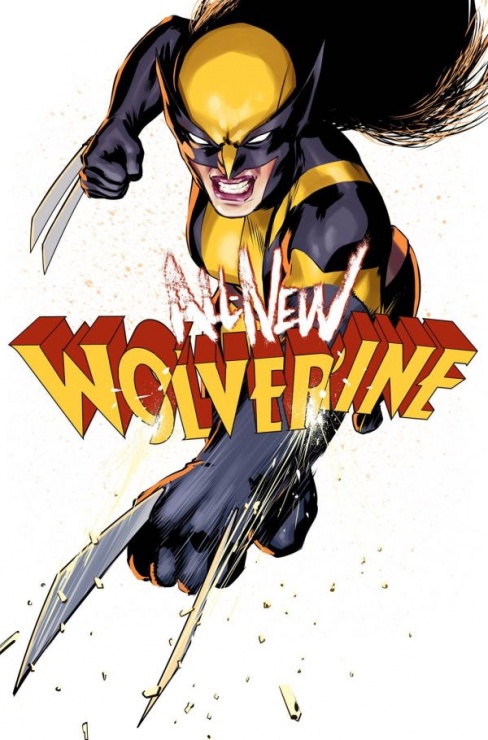 Variant cover to All New Wolverine #1 by David Lopez

Following the events of Secret Wars, Marvel relaunched and introduced many new series into their line up. One of the standout new series was “All New Wolverine” from Tom Taylor and David Lopez. The series follows Laura Kinney (X-23) as she takes up the mantel of her mentor, Wolverine. The story centers around Laura and her journey from her past to who she is and wants to be as a hero. The first two issues have introduced a new threat she knows all too well, clones.

The series is beautiful realized and brought to life through the artwork of David Lopez. We were able to talk to David about his work on the series, his process for an issue, and what a date between Laura and Warren might look like. Issue one and two of “All New Wolverine” is in stores and available online now!

Thanks for the time David. First off what has been the best thing so far working on “All New Wolverine”?

David Lopez: The warm welcome of people, I was a bit afraid since long term fans (like myself) do not use to see with good eyes major changes on classic books, but people seem quite happy with our proposal and that’s cool, they’ll love Laura as Wolverine.

What is your normal process for an issue? Has it changed at all for this series?

DL: It’s changed a little bit because now I work with Navarrot and that is awesome.

First thing I read the script, then read it again, and again and a few more times till I find the story I want to tell inside it, that something that will make it work as a whole.

Then I draw quite finished layouts and send them for approval, that’s when the editor (Mark Paniccia, Darren Shan, Daniel Ketchum…they’re an army!), the assistant editor (Christina Harrington, she’s the best), the writer (Tom Taylor), my helping hand (finisher/artist David Navarrot), the colorist (Nathan Fairbairn) and I argue a lot about what shot works best and what’s the best way to show something or what’s the most important emotion we want to transmit in a specific panel.

Once we have something we all agree in I start working on final art, I render the characters and Navarrot does all the rest, if there’s some machine to design or stuff like that, that’s his work, I only concentrate on characters.

Magically we finish the pages on time and then send them to Nathan who fixes everything so I look like an artist.

While Laura may be a clone of Wolverine she is very much a different person in her attitude, fighting and style. For you what have you identified as most important to the character of Laura when it comes to her personality and how it influences your art?

DL: Logan is more like a wounded wolf, he’s suffered a lot through all his life and only found peace once he met Xavier, Laura is more like a lone wolf, she’d colder, she found a family earlier in her life so she’s more stable emotionally. When Logan jumps blindly to a fight Laura finds her moment. In my mind Laura has the potential to be a more dangerous foe than Logan.

Once she’s fighting I have in mind the moves of the videogame, there she’s like a blur of blades, Logan relies more on his strength and adamantium bones.

Issue one and two showcased some awesome fights. What’s your approach been to the action for the series?

DL: I’m quite obsessed with “Ghost in the Shell: SAC” and here I’m having the chance to do something like that. I love manga and anime and fortunately the American readers are more and more used to that language so I can do whatever I want. I’d show more blood, and guts and severed hands and, you know, gore, but it’s a book for a wide audience so I have to restrain myself a bit. 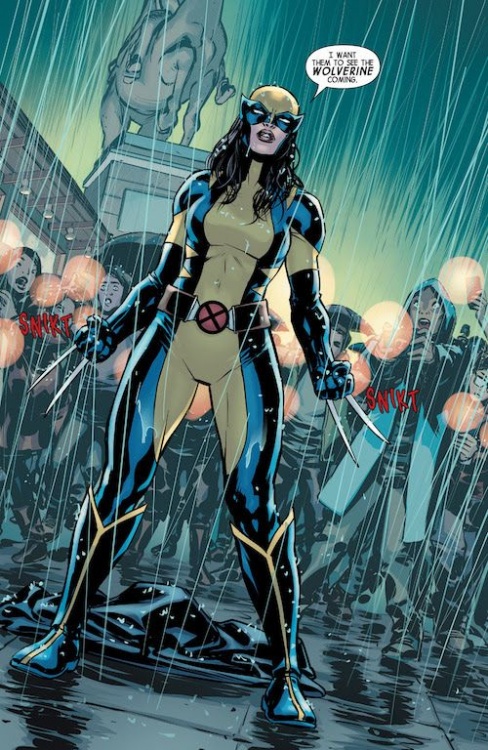 A page from All New Wolverine #1

What I have enjoyed most about the first two issues is that you and Tom have Laura expressing emotions and dealing with relationships in addition to the superhero action/violence. How has it been bringing emotion to a killing machine?

DL: I think that it’s always been there but fortunately she’s matured emotionally and can express it. I think of her as a “what if Logan had a different youth?”.

No spoilers, but issue two ends with the introduction to a familiar character from the Marvel U. So far the book has been pretty low key character wise focusing mainly on Laura and a little bit of Warren. Is that something you see as the direction for the book or will it expand as the series continues?

DL: Well…it definitely expands. As Wolverine she’s an Avenger and an X-Woman, she’s a key element in the Marvel Universe like Logan was. I’ve said enough.

The first two issues have centered around Laura dealing with her own set of clones. Is that a blessing or a nightmare as an artist to have to draw multiple versions of the character and make each one distinct in a way(which you do an amazing job of by the way)?

DL: It’s a blessing, I only have to draw a set of features! But it’s not the size of the eyes or the shape of a chin what makes a character, each clone has her personality and that’s shown in her body language and expression. It’s fine.

What can readers expect from the series and your art going forward?

DL: More action, more and more fights, and bullets and everything that makes Wolverine a great book.

I need to know what it would take a get a date night issue of Laura and Warren? How can that happen? What do you think the two would do for a date?

DL: It’s not easy for a super hero to have a date, they’re always saving the world and fighting old enemies, Wolverine has lots of enemies… But if they’d found that day when they don’t have too much stuff to do, the night would probably begin like a regular date like everybody’s, but I bet they’d get into trouble, they’re muties and muties tend to spread havoc wherever they go.