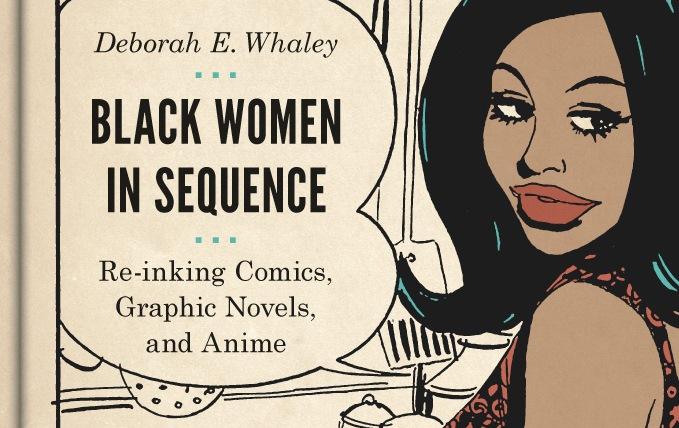 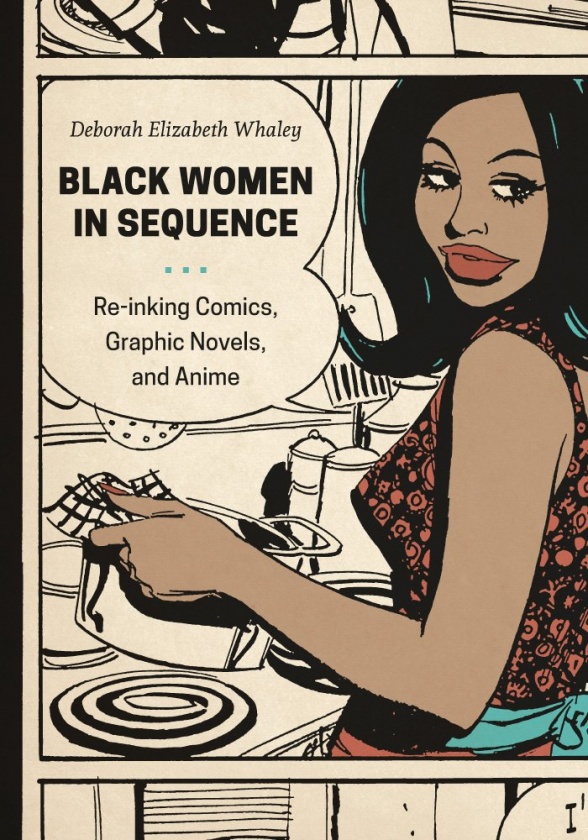 Devotees who want to bulk up on their knowledge of comics and culture will want to pick up Dr. Deborah E. Whaley’s new book of research, Black Women in Sequence: Re-Inking Comics, Graphic Novels, and Anime (University of Washington Press). The book furnishes us with vital perspective on black women as creators, as characters, and as cultural consumers in the world of comics. We had the opportunity to interview Dr. Whaley about her new book, and she graciously provided a glimpse into the enlightening and thought-provoking look that her book provides.

Professor Whaley is Professor of American Studies at the University of Iowa and also author of Disciplining Women: Alpha Kappa Alpha, Black Counterpublics, and the Cultural Politics of Black Sororities (SUNY, 2010). 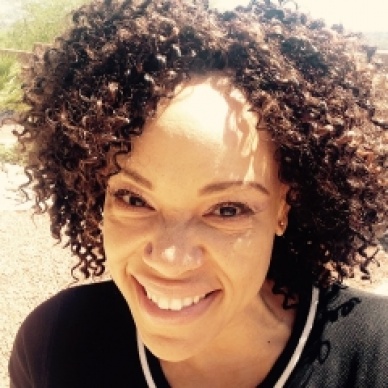 Thanks for this chance to talk about your book, Dr. Whaley. In your preface, you describe Black Women in Sequence as a book of maneuvers. Can you describe some of the moves of your argument in the book?

Deborah E. Whaley: The maneuvers are artistic and intellectual. My aim was to think through sequential art from various aspects, including fandom. I write about reader responses, the visions of artists, the business side of the field, and the social, cultural, and political contexts that gave rise to the representation of women of African descent in a wide range of print and moving image media. Since there are not any monographs and few articles on the topic of Black women in sequential art, I was building an archive as I was researching and writing.

You say in your preface, “I’m a Black woman in a fanboy world,” which I understand points to the multiple facets of identity and cultural frameworks that you bring to this study, but also to its tensions and challenges which you consider a “productive coupling.” What drove you to conduct this research and write this book?

DEW: My desire to write the book was three-fold. I grew up reading and drawing comics and later did some training in cartooning, so writing this book became another way to express my artistic relationship to sequential art. Comics in written and moving image form always signified a magical space for me, including the television adaptions of Batman, Spiderman, and Wonder Woman, the comic strips Cathy and Jumpstart, and the Saturday morning animation series Superstretch and Microwoman. I also had an affinity to particular characters: Catwoman, Storm, Batgirl, Spiderman, The Hulk, Isis, and even the more “cheesy” Electro Woman and Dyno Girl. An ability to take control, to intervene, to try to make the world a better place is the work of many comic book and graphic novel characters, and this quality was appealing to me. Comic strips, similarly, engage with cultural, social, and historical events and try to find humor in those events; The Boondocks is a strong example of this aesthetic and cultural mixture. This is what makes sequential art so magical.

Toward the end of writing my first book, the film Catwoman came out, and I decided I would write an article about the character. As I researched work on Black women and comics, I found little to date had currently been written, and I decided to continue to write on the topic. This was in 2004. By 2006, I had delivered papers, written an article, and I had begun to research and write about Jackie Ormes in 2008 and the characters Nubia, Vixen, and Storm in 2007. From there, the project kept growing. Wherever I noticed holes in the scholarship, I sought to the fill the hole. Therefore, the drive to write the book was artistic, experience-based, and intellectual.

How do you read Eartha Kitt’s Catwoman in light of the history of the character? How does that portrayal exemplify some of the “possibilities and contradictions” that Silver Age-era inclusions of Black Women entailed?

DEW: Kitt’s portrayal in the 1960s marks the possibilities to see women of African descent in a complex way. She was an anti-hero and not squarely situated within typical ideas of positive representation. Yet, her execution of the role also usurped a certain amount of feminine power. She was smart, sexy, and in control, similar to how one might construe the character Fish Mooney in DC’s television series Gotham. Kitt as Catwoman has impeccable comedic timing and she does not fit the common stereotypes of Black women as mammies, jezebels, tragic mulattas, and sapphires. Matronly and promiscuous images are also not a part of her characterization.

At the same time, unlike the other Catwomen that came before her and after (with the exception of Halle Berry), the decision to excise the love story between her and Batman was unfortunate and likely a product of the late nineteen sixties being uncomfortable with interracial romances on the small and on the big screen. In 1967 her role was groundbreaking; she appeared on the heels of the 1960s civil rights movement and not too much before the assassination of Martin Luther King Jr. Black women and men were fighting for equal space and accommodations in the public sphere, and here comes Eartha Kitt as Catwoman – it was simply amazing.

Yet the portrayal represents a series of contradictions: yes, her presence was amazing, but there were still limitations concerning how far producers were willing to go with a Black Catwoman. Her camp portrayal and racial ambiguity likely also curtailed overt protest in regards to her blackness. Long pin-curled locks, a light-to-medium skin tone, and a svelte figure made her visually appealing and certainly the costume made her blackness stand out less. As Black spectators, we all knew it was Eartha Kitt, a Black woman, and we could cheer her inclusion, but I suspect for dominant culture identified viewers, her blackness was not overtly threatening. “Eartha Kitt Femme Fatale” (2013) is a wonderful “newish” comic book series that resurrects the image of Kitt as Catwoman for the millennial generation. 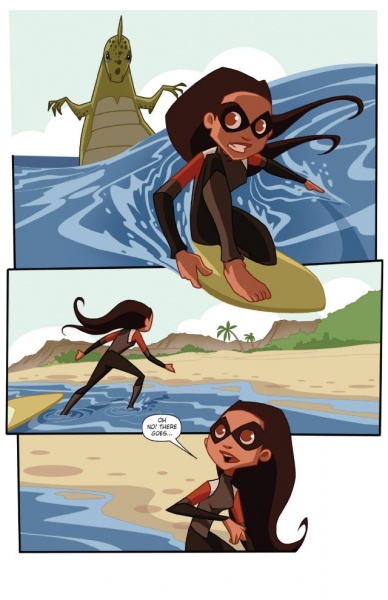 One of my ah-ha moments as I read your book came as I read your sentence, “comic art is significant for its ability to appeal to everyday life and culture given its unique ability to combine image, texts, pace, action, and humor with the intent to communicate a pithy, powerful message to reader or spectator” (p. 31). Why are comics a good medium for examining race and identity in American culture? When we consider race and gender, how does analysis of comics differ from other media, like film and music?

DEW: Visual art is very powerful, as is the written word. When you put the two together in the form of sequential art, magic happens. In dealing with topics related to identity and inequality, sequential art engages multiple aspects of cognition and recognition. Topics that are difficult and challenging have an ability to reach a larger audience through popular culture in general, but a graphic novel, for example, is something that is read, re-read, studied with the eye in terms of the visual aspects and written aspects. A song you listen to, and you may listen to it more than once, but there is no visual, unless you are watching a music video.

When one reads text, the eye does not normally move around throughout the page in a studied way as it does when reading a comic book or graphic novel. You can introduce sophisticated ideas in sequential art in ways for a lay reader to understand. In film, there is the visual and narrative aspect as well; like comics, you are assessing the visual and the written (or narrative and dialogue) simultaneously. I am a film and cinema studies scholar too, which may be why I am also drawn to writing about comics.

Your chapters examine representations in mainstream comics, newspaper comics, other comics-related media, such as anime. You also talk to and examine the work of contemporary Black women creators. Is there one example from the book that you feel like best exemplifies the complexities of the presence (and absence) of black women in comics?

DEW: Nara Walker and Rashida Jones serve as powerful examples of the complexities of presence and absence. Walker’s racially ambiguous and gender ambiguous characters push the boundaries of how one might understand and misunderstand gender, sexualities, and race. Some characters in anime and manga, for example, are ambiguous, but difference is rarely a part of the narrative. To the contrary, Walker delves into the inter-species relations as markers of interracial relations, and gender ambiguous characters address complex sexual identifications as well as homophobia and biphobia.

Rashida Jones uses a white protagonist (though closely evocative of her own likeness) to remark upon conflicts between the US and the Middle East and class warfare. Her comic, “Frenemy of the State,” seems to pose the question: can a rich heiress become an operative of the state and at the same time critique the state and its actions domestically and internationally? Jones’s main protagonist is not Black. However, she brings a Black consciousness to the main protagonist; she is both an insider and an outsider. In this portrayal, blackness is both present in terms of a critical consciousness and absent, insofar as her protagonist, though she looks similar to Jones who is of mixed race descent, appears to be of the “white” dominant culture. 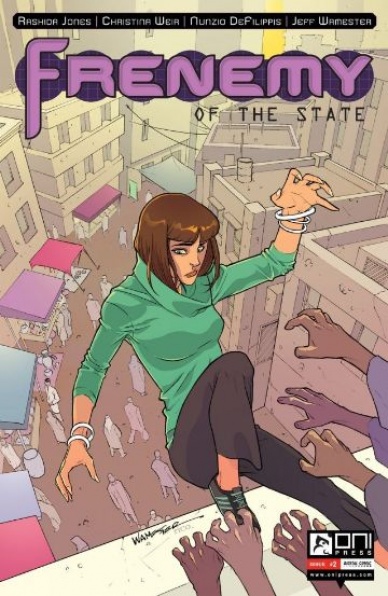 Where would you point readers interested in learning more after reading your book?

DEW: This list is too long to write here, but in the introduction to my book, I walk through many works on comics and women in general, Latino/a, Asian American, Indigenous, and male representations in comics, and I situate my book within established theories of sequential art forwarded by major scholars in the field.