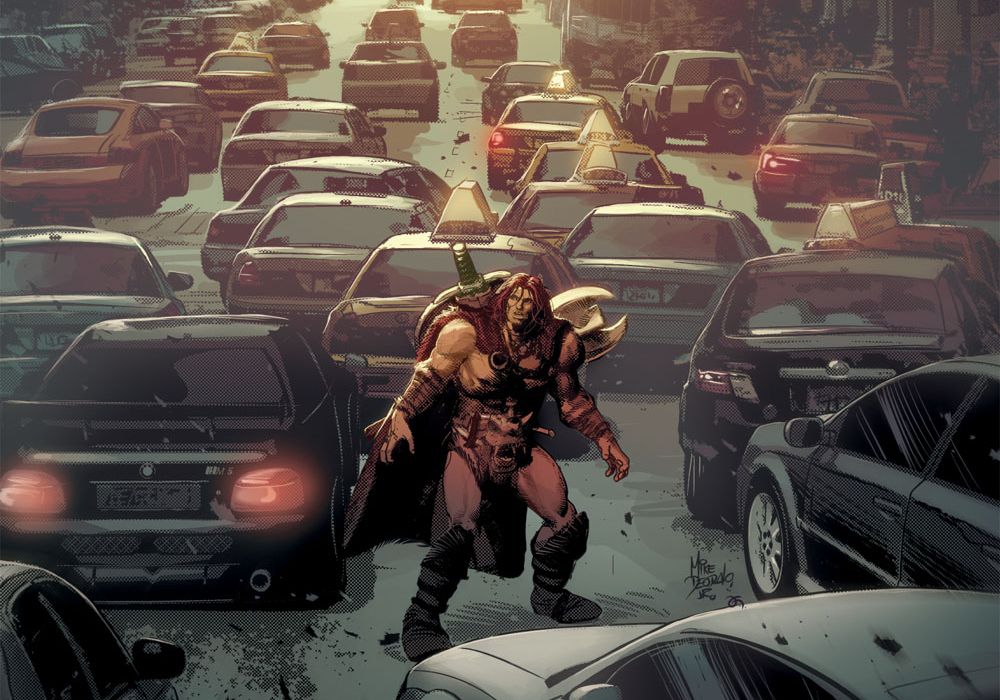 What happens when a “merciless sword and sorcery warrior finds himself blasted through a wormhole to a modern-day metropolis where he must protect those around him from an evil wizard determined to send him to hell?” What happens is award winning creators Jeff Lemire, Mike Deodato and Frank Martin come together to answer those questions in their newest Dark Horse Comics series, “Berserker Unbound.” Jeff and Mike team up again for this new  4 issue “urban warrior fantasy series” which releases its first issue this week.

To answer the question of what happens when a barbarian is thrust into a modern day city we were able to speak to artist Mike Deodato about this question and more. Below Mike talks about the new series, working again with Jeff Lemire, and why he always wanted to draw barbarian story. We also received some exclusive pages from the first issue, courtesy of Dark Horse, which follows the interview below. A big thanks to Mike for taking the time to answer our questions and be sure to look for “Berserker Unbound” in stores and online this Wednesday. 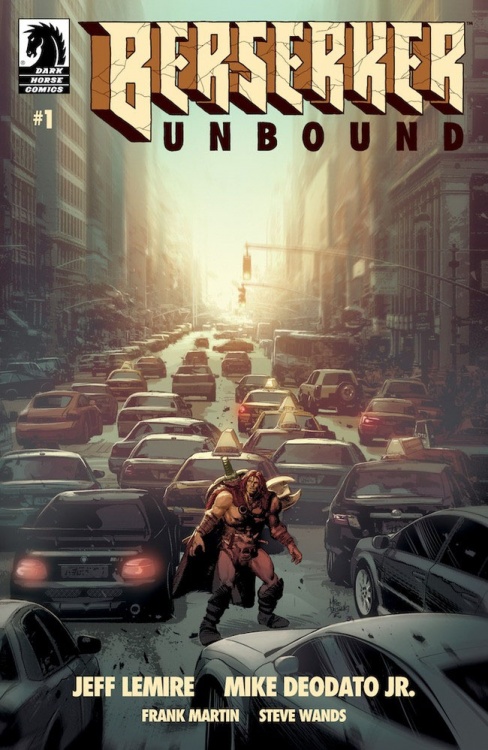 Cover by Deodato and Dave Stewart
I think when readers see the name “Beserker Unbound” and that great cover by Mike they might immediately have thoughts about what this series may be but Lemire fans may know to expect the unexpected. What can you tell about the series? What can readers expect from the series who are familiar with your guys work?

Mike Deodato: “Berserker Unbound” is about this giant barbarian who is gravely injured from a battle and thrown into our world through a portal where he has to discover a way to survive. Luckily, he is found by Cobb, a homeless man, and they soon become friends. It is a story about a friendship between two men from different worlds.

Similarly, with a name like “Berserker Unbound” it is easy to picture some brutal action moments are to be had. What is the tone of the series you are looking for and that readers can expect? Is there any goal to live up to a name like that?

MD: I drew some of the most savage and brutal battle scenes I have ever done, but the core of the series is the opposite of that—it is about friendship and bonding.

For a series that has that 4-issue mini-series tag attached to it, how do you approach this first issue? Is there any thought or incentive as creators to make sure people don’t get the trade wait syndrome?

MD: I confess I didn’t think about that much. I just wanted this to be my best work ever. But yes, it has some great cliffhangers that will leave the reader eager for the next issue.

Mike, I read that you said about the series, “I really wanted to draw a barbarian story.” For someone who has done a lot of comic books in his career why was this style of story one you wanted to tackle as an artist?

MD: I was always a big fan of barbarians. Frazetta is a huge influence in my work. This is the story I always wanted to draw my whole career.

You two are reuniting after your work together on “Thanos.” How is the creative relationship for you two going into this original series work? I have to imagine it’s good partnership if you wanted to team up again. What do you think the other brings to the series that you couldn’t?

MD: Jeff is so good in everything he does, I love the humanity and sensibility he brings to his characters.

You both are established and respected names in comics with a lot of experience under your respective belts. Is there a difference at this stage in your career launching a new series, especially one that is your own unique creation?

MD: It is a truly labor of love for me. It is like raising a child, it is an experience that everyone should be blessed with.

How do you bring personality and relate-ability to a character with giant muscles and who wields a sword, shield and humongous axe? What makes an interesting main character?

MD: That is Jeff’s job: to make this giant warrior be someone you wanna know more about. And he does it beautifully. Jeff is so good he could write a drug description leaflet and still make it interesting!

With a story that spans over time and incorporates magic, is there a lot of lore as a team you have created for this series? Is this a very big or small-scale story in terms of world building for you?

MD: There are tons of possibilities ahead. It all depends on if our readers want more. We’ve planted the seeds for future stories in the world of our first story.

What do you hope readers take away from this first issue and series?

MD: The sense of satisfaction we all have after reading a good book.

From the creator of Black Hammer!

A merciless sword and sorcery warrior finds himself blasted through a wormhole to a modern-day metropolis where he must protect those around him from an evil wizard determined to send him to hell. 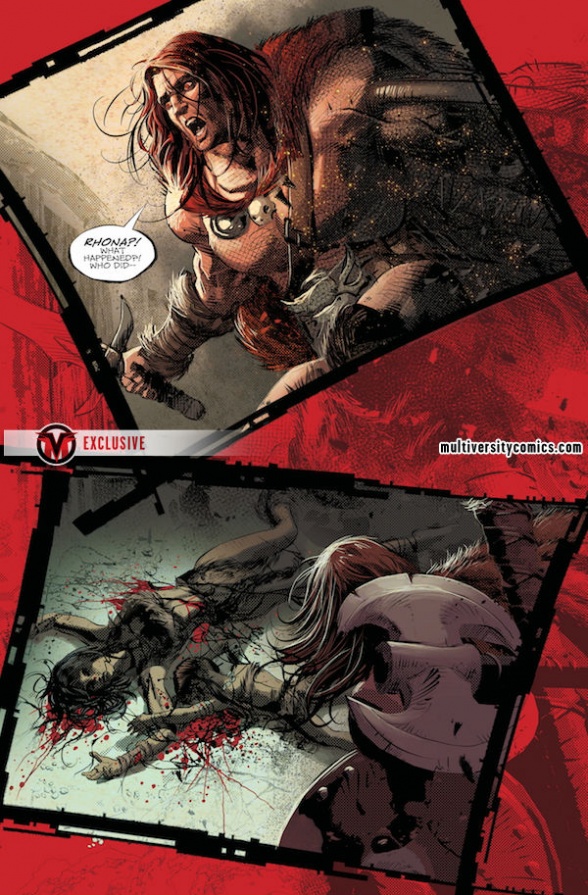 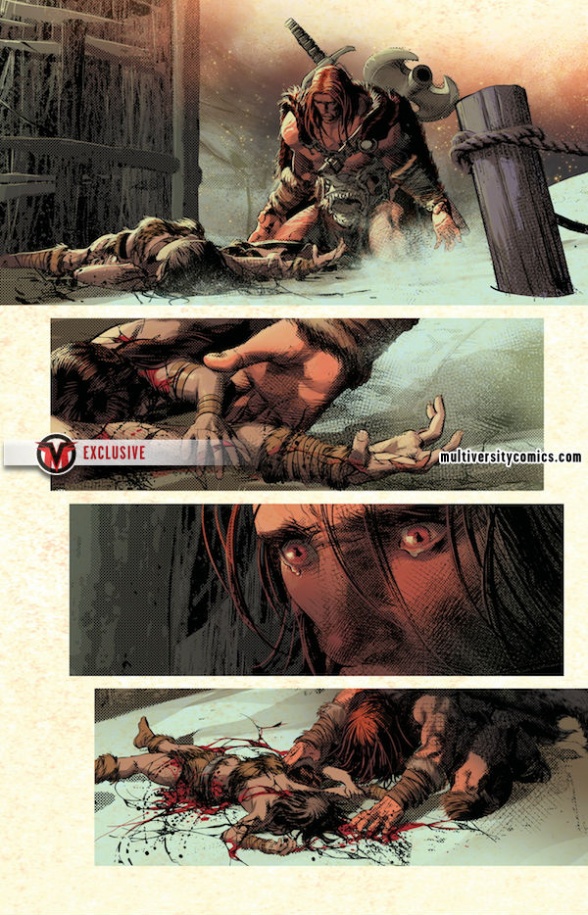 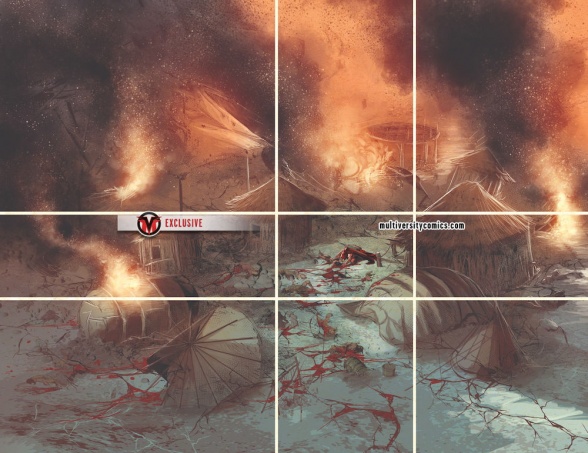 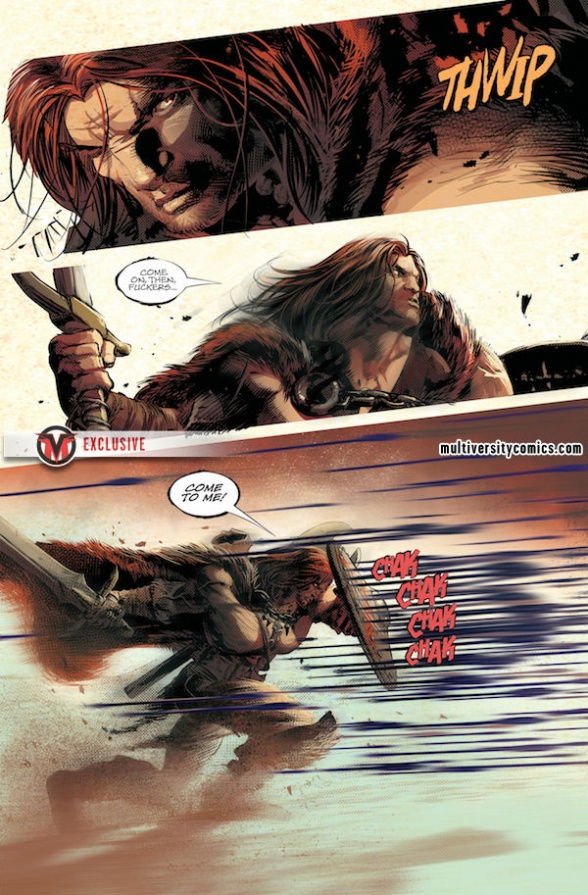 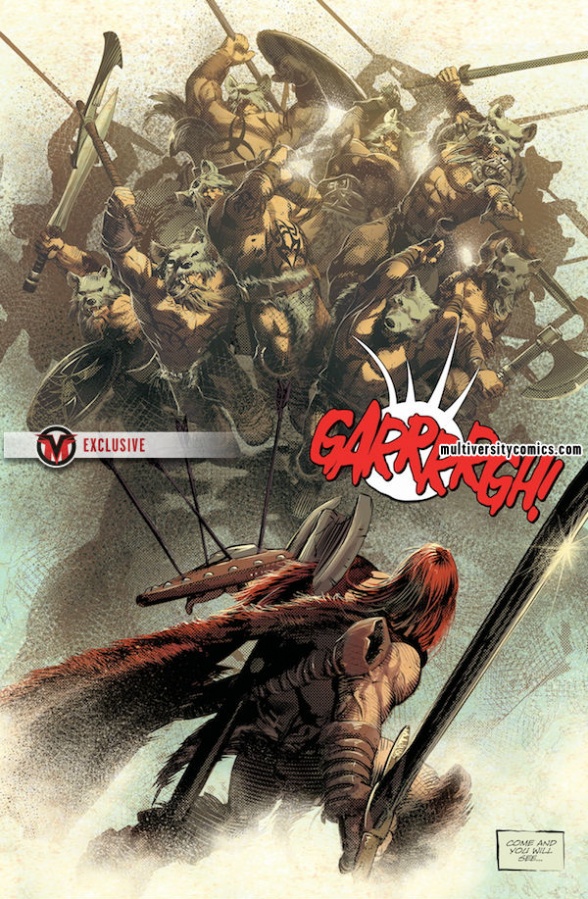