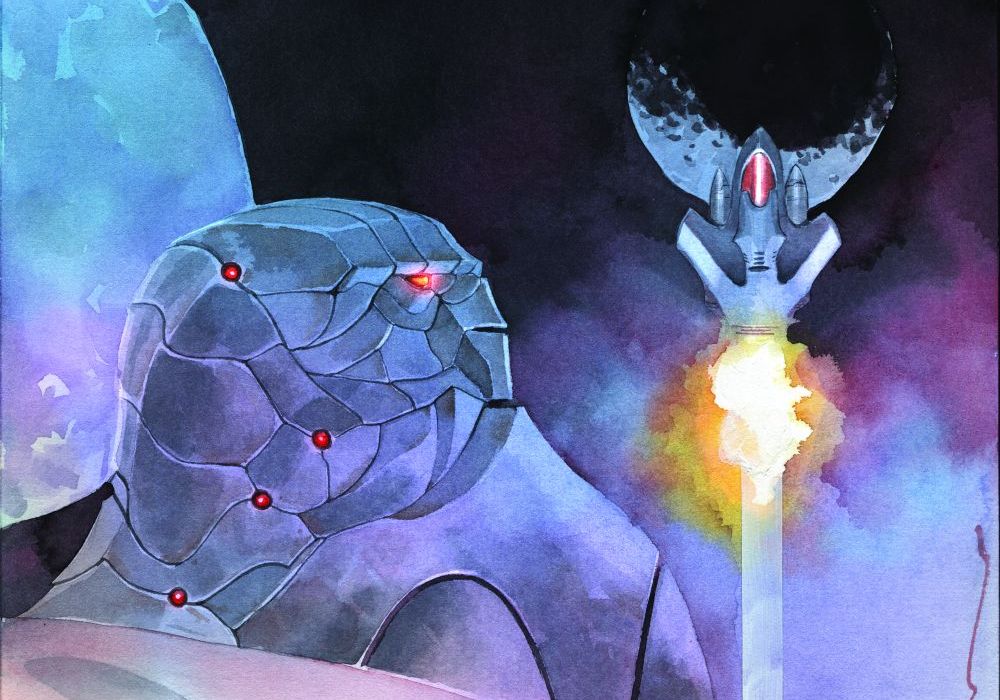 “Descender,” the Image Comics title by writer Jeff Lemire and artist Dustin Nguyen, is one of the most consistently thrilling sci-fi comics published today. The book looks and feels unlike anything else on the shelves, and draws the reader into a world of watercolor science fiction – a term that seemingly never existed before this book invented it.

The book is entering its final stretch before something mysterious is happening. While we couldn’t get Jeff and Dustin to reveal what that is, we did get to sit down with them to discuss where the book is currently at, and what is coming. In addition to that, we have an exclusive preview of issue #27, which hits shelves late next month. We’ve also got a look at some of Nguyen’s covers for the next few issues, included with the preview.

Check out both the interview and preview below, but be warned that there are some spoilers for the book in the second half of the interview. Proceed with caution! 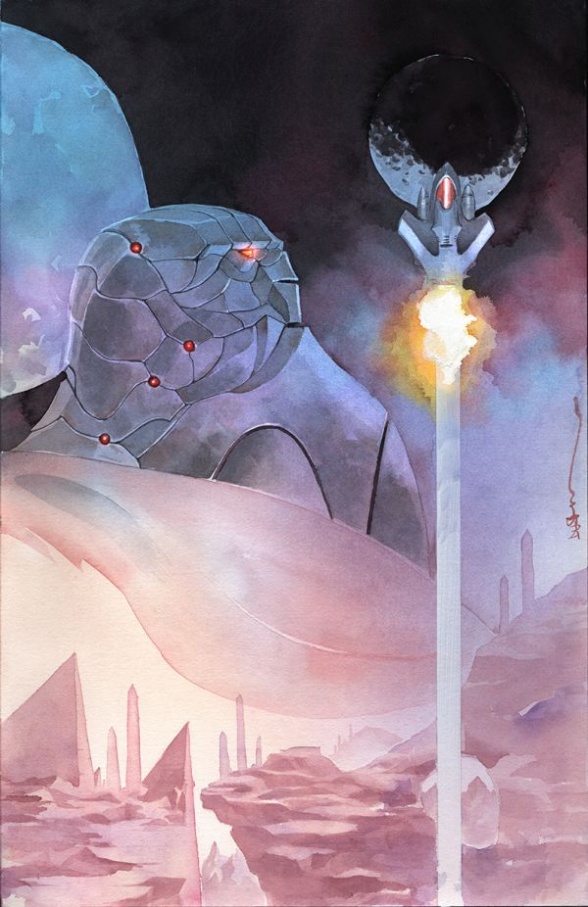 Cover A to 'Descender' #27 by Dustin Nguyen

The momentous 5th arc of “Descender” (‘Rise of the Robots’) was released in trade earlier this month and the 6th (‘Old Worlds,’ starting in February’s issue #27) sets the stage for a major storyline shift. You’ve mentioned on Twitter that although “Descender” sees an end after the next arc, the story doesn’t quite end there. Without spoilers, what can you tell (or tease) us about the forthcoming direction of the story?

Jeff Lemire: Unfortunately I can’t say too much yet other than that this 6th arc will mark and ending but also a new beginning for the world of “Descender.” Dustin and I are still totally reenergized by, and totally committed to, the world of “Descender” and we have a BIG change coming that I think will surprise and excite fans as well. We’ll make an announcement soon, but we need to be careful as we don’t want to spoil the story and want readers to discover the things we have planned as they read them.

We’ve come a long way with robot-boy-hero Tim-21, the motley galactic crews around him, the far-flung worlds we’ve visited. It’s felt believably familiar but also utterly original. How have you made “Descender” so able to stand apart from similar sci-fi, narratively and visually?

JL: I think a lot of it comes from Dustin’s art. By doing the book in water colors it immediately sets it apart. He is using such a beautiful and organic style to do robots and other techy things and that creates a really unique tension and feel to the book. And for my part I just try to keep it focused on the characters. No matter how big the concepts and set pieces they are just back drops for much more intimate stories.

We monthly readers thank you for rolling out “Descender” with such regularity and consistency in quality. Dustin, you juggle designing, drawing, inking, and watercoloring this series, not to mention your awesome work with DC Secret Hero Society and elsewhere. And Jeff, your prolific comics output is legion, valiant, and all terrific. Are there tricks to your synchronicity as a team that you’ve discovered, thirty issues into your collaboration?

Dustin Nguyen: For my part, I think what’s been keeping the book rolling along as smooth as possible is that we’re both creating something we both believe in, and that’s enjoyable for us both. Nothing is forced and really, just telling the story we want as best as possible with little interference from anyone else, it’s a lot less stressful.

JL: The “Descender” collaboration has been very easy and stress-free from that start. We both have a lot of trust in one another and give each other the freedom to do our thing. So it’s pretty effortless in that regard. But Dustin is the one doing the heavy lifting and putting in the hours at the drawing board.

Dustin, the wide reach of the story means there are various terrains and character types you’ve gotten to design and draw: spaceships and swamplands, robots and aliens, etc. Where have you found the toughest challenges, and where have you had the most fun?

DN: Everything is fun really, but the most challenging part is keeping all the worlds and time periods different enough that you can tell you’re in a different location each time. That part is tough, most artists have a signature style or design sense that makes you recognize them, regardless of what they’re creating. Film studios and development teams bring on multiple artists, each to create a different world and different feeling for each. With just myself and a monthly deadline, I realize a lot of times, my worlds seem to look alike (haha). So yeah, variety in atmosphere is probably the most challenging part of creating new worlds for me.

Jeff, it’s a thrill to read your long-form storytelling, even more propulsive and emotionally hard-hitting at arc five than arc one, not unlike latter-issue “Essex County” and “Sweet Tooth.” Is there a different satisfaction or freedom, or maybe a different burden, in writing a story at this stage?

JL: You always have your initial ideas for a series or a story that you start with and build towards. But then, when you get this deep into it, something magical happens it the story and characters start to reveal total new dimensions and new directions you never could have gotten to had you not gone through the process and the time it takes, to do 30-issues of a story. This is the fun stage where new things emerge from your old ideas and you get excited all over again.

One distinctive thing about “Descender” is its “watercolor Sci-fi” aesthetic. As the story has progressed, strong emotional beats and an ongoing tone of yearning have made that aesthetic make more and more fitting. It’s wonderful. But are there places where you’ve found a tone has been difficult or constrained because of that aesthetic?

DN: A lot of the cleaner, more polished futuristic settings are tough to pull off sometimes, but I don’t feel that’s the medium’s fault as much as it’s just the way I work.

First of all, thanks for populating our nightmares with the severed head of Tim-22. Dustin, which was more exciting to design, the dramatic end of Tim-22 or the swarming Hardwire armies?

JL: Ha…I was sort of inspired by John Carpenters The Thing on that one. Dustin nailed it.

The end of ‘Rise of the Robots’ seems to have put the chess pieces in place for the big conflict. But the next arc’s title ‘Old Worlds’ might suggest we’re going to fill in relevant backstories and context for the conflict to come, not unlike the third arc. Do we have that right? Should we hold off expectations for the Driller’s redemption, reunions with Andy or Bandit, the fate of Quon, etc., until whatever’s beyond the end of “Descender?”

JL: The ‘Old Worlds’ arc will only be 2 issues and will indeed jump back to reveal some important revelations and aspects of the greater mystery. Then the next 4 issues will be called ‘The End of The Universe’ and we will see all the chess pieces come together.

Ah! Very exciting! That quality about “Descender,” its expansive breadth of worlds and characters (Gnish to Woch, Hardwire to Harvesters) that yet stays personal and intimate throughout… with the drumbeat of large-scale conflict looming now, how do you make the story big but still keep it small enough to keep that personal punch?

JL: Every idea, every world, it all comes from the characters. The back drop is pointless if you don’t have stories to tell within it. So I am always very conscious of keeping he heart of the story and the characters in the forefront and not letting the plot or the world overtake them. Plot should be there to bring out new aspects of our character and to enhance or reflect what is going on inside of them.

Several arcs of “Descender” have punctuated the flow by playing with alternative storytelling, like three stories simultaneously unfolding on three-layered horizontal panels. Are there more of those experiments in store for “Descender”?

JL: I think the 2-issue ‘Old Worlds’ arc is playful in that way. And then for ‘The End of The Universe’ all the shit really hits the fan, so there won’t be a lot of time to play around.

Sounds like a thrill. Any projections how long the series, and whatever comes next, will last?

JL: The title of those 4 issues, ‘The End of The Universe,’ which will be issues # 29-32, kind of says it all. But stay tuned. We have a curveball coming.

Dustin, the “Little Robot” variant covers for this upcoming arc remind us that you’ve done fun, kids-targeted art along with the epic space drama of Descender and foggy streets of Gotham. Any more of that in store in the foreseeable future?

DN: I hope so, the 5 [“Little Robot” variants] created for this arc was done because I just wanted to draw some fun little characters for myself. If folks seem to enjoy them as well, we’ll definitely put out more.

“OLD WORLDS,” Part One! The origins of the Harvesters are finally revealed as we jump back thousands of years to see the dawn of the robotkind and the the secrets of the Ancient Robot and how it connects to Tim-21 in the present. Secrets that have been building since issue one are finally revealed in this shocking new story arc. Each issue in this arc will feature “LITTLE ROBOT” variant covers by DUSTIN NGUYEN. 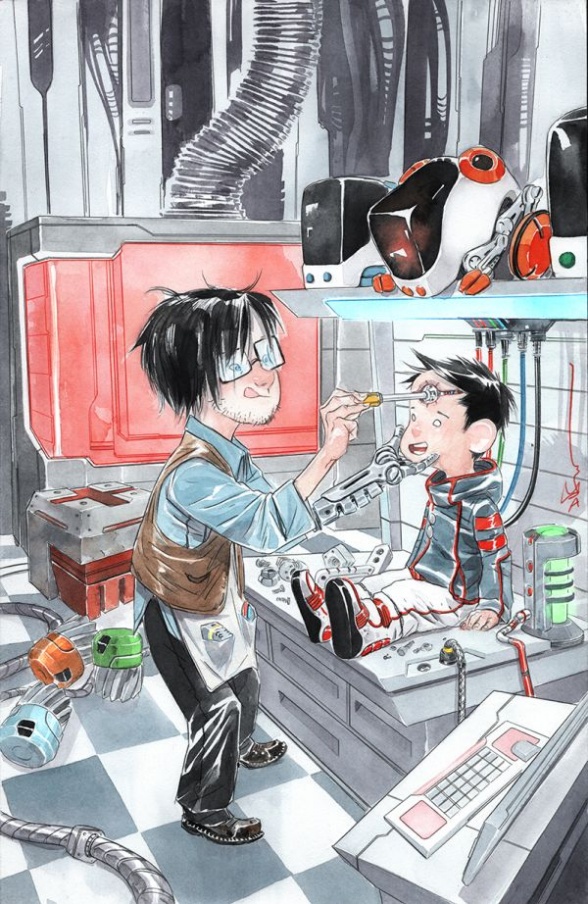 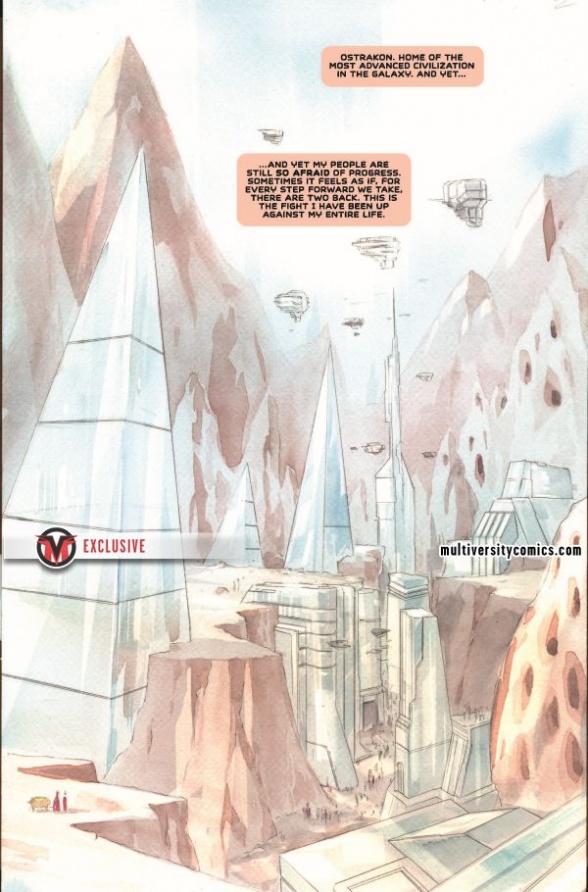 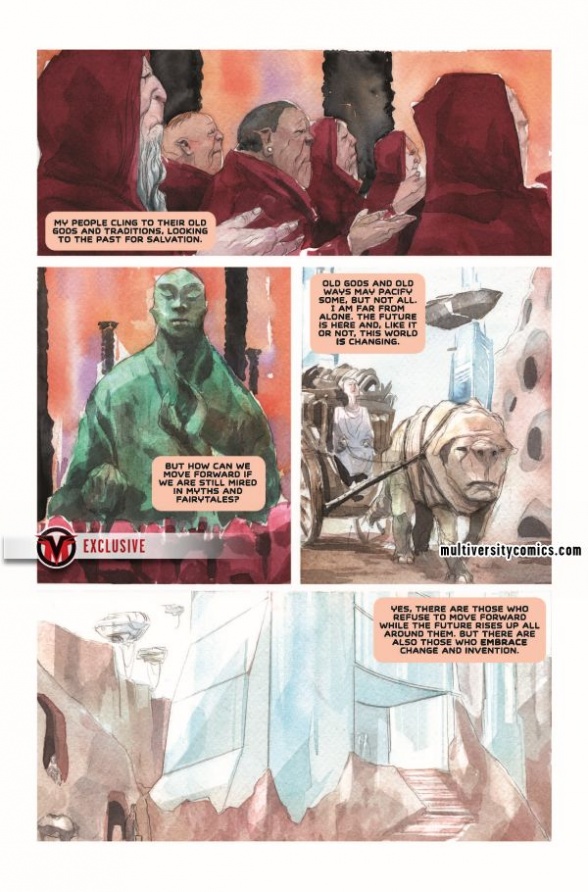 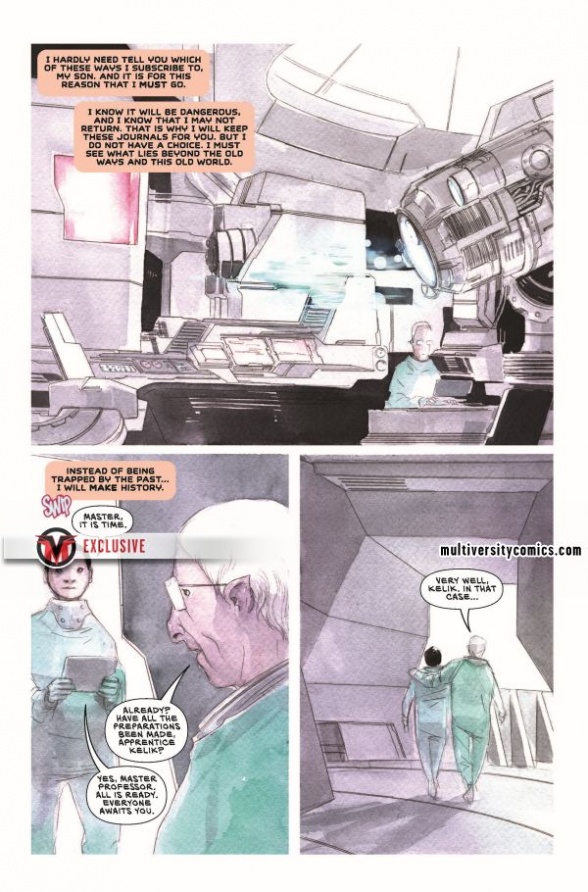 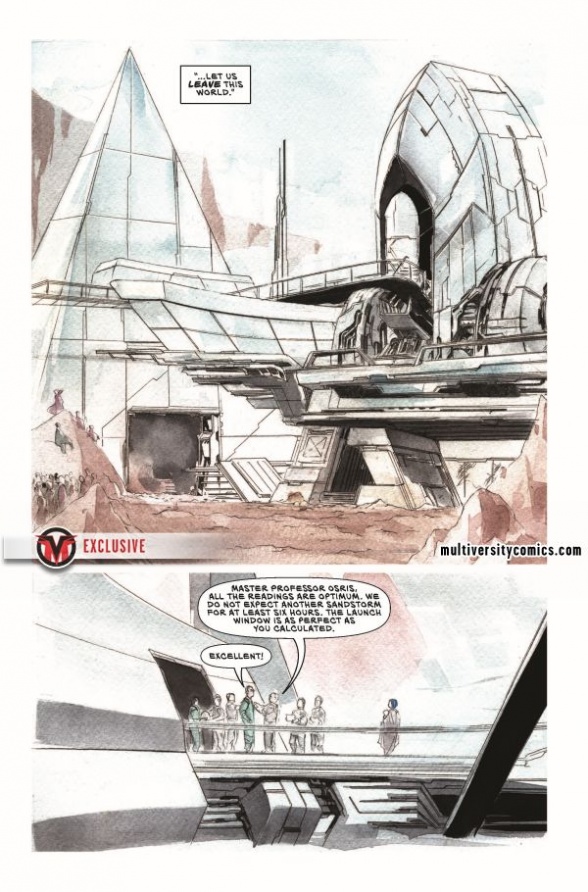 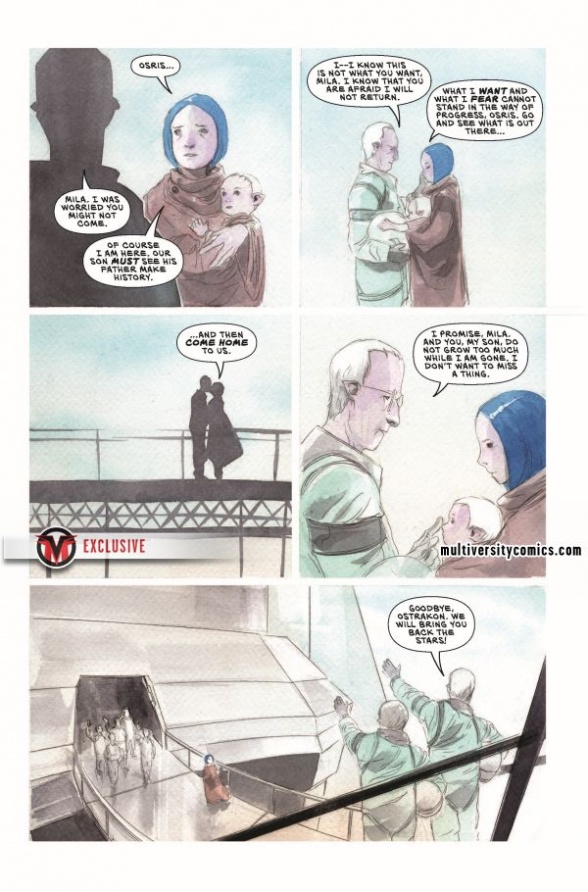 Thanks to Jeff, Dustin, and Image for the preview, and make sure to pre-order the book today at your local comic shop, or pick it up on February 21st. Extra special thanks to Steve Wands and Will Dennis.