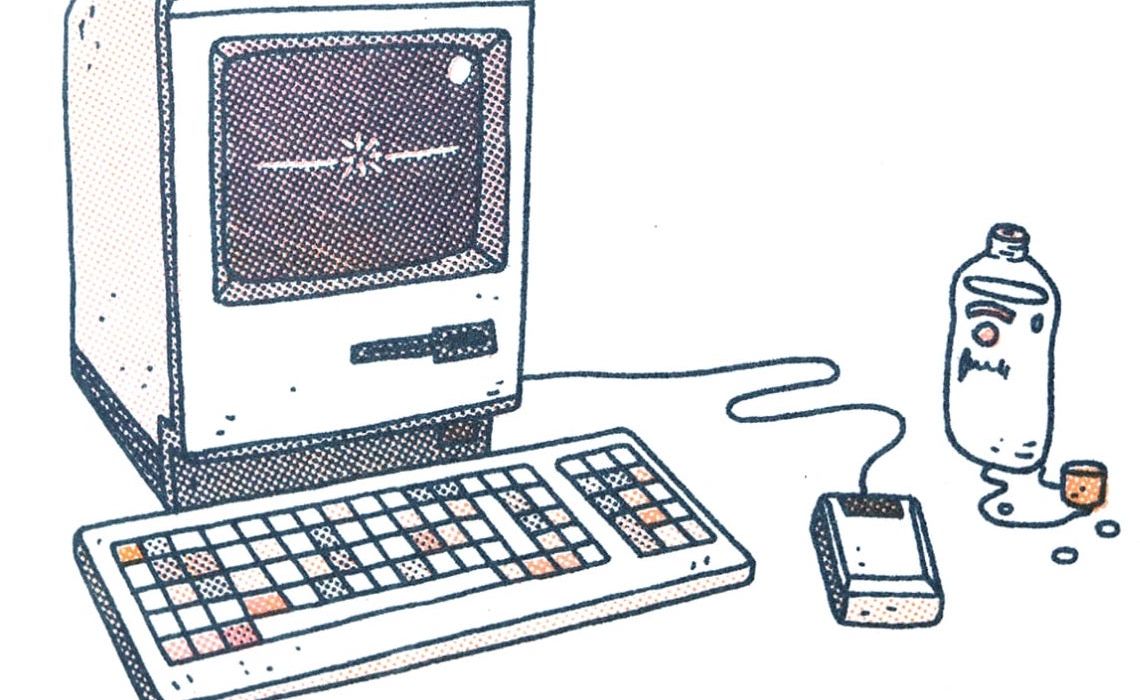 Edo Brenes is the Cape/Comica/Observer Short Story Prize Winner behind “Lobster Paradise,” “Memories from Limón” and the comic strip “Collage Sandwich.” His latest project, “Blackberry Cheers” is an abstract, sci-fi comic that is handbound and screen printed. I was lucky enough to ask him a few questions about “Blackberry Cheers” and his career across the creative arts.

From your perspective, what has your career as an artist looked like and where does “Blackberry Cheers” fit into it?

Edo Brenes: My career as an artist is always changing, although it now seems that when it changes it reverts back to an earlier state only with new insights acquired. I say this because I started off as an animator, doing short films and music videos; but then I also got into photography and film; which later helped me improve my skills as an animator. Then I got tired of these long projects and left animation aside for a while, and just did concept illustration which led me to do this as a career full time, I even started painting murals! After some time, I realized that I was missing the narrative part of animation – the storytelling- so, I began doing self-published short comics, which led me to write my first graphic novel “Lobster Paradise,” (260 pages done in graphite pencil about life in Costa Rica in the 1940s) at the moment published in Spanish, Italian and soon in French. After I finished this project, which took me nearly two years, I felt I needed a different creative outlet, just to leave conventional narrative and graphite pencil behind. So I began working on Blackberry Cheers, which explores panel compositions, abstract narrative and the use of colour through screen printing experimentation. 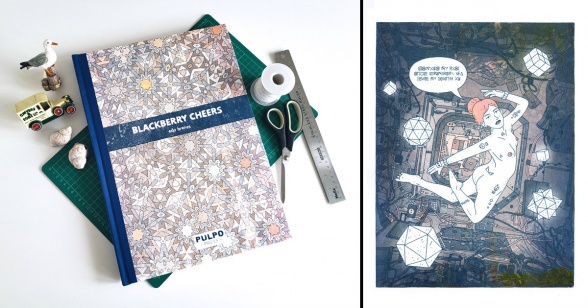 What are the main themes of “Blackberry Cheers?”

EB: Even though the whole novel is abstract storytelling, there are a few themes that surround it:

1. Deep space exploration: I got into astrophysics and the theory of relativity a few years ago, and although I still struggle with a lot of the concepts I find it fascinating.

2. Retro space: I’ve always been fond of retro and vintage art and themes, and have been inspired by cheesy movies such as Barbarella, shows like Lost in Space and by the old space Legos. I sometimes draw to the soundtrack of these shows.

3. Repurposed old technology: there’s something very interesting to me of how people in the 60s and 70s imagined the future, especially outer space; so I have taken a lot of elements, such as old computers and old cars, and put them in use in this project as technological advances.

4. The female body in art: I began to notice the importance of the female body during Renaissance right into the early 20th century, especially the nude body. There are countless paintings where a naked woman is portrayed in a normal surrounding, like Manet’s Luncheon on the Grass, where the characters are fully clothed, and a lady just sits naked amongst them. I wanted to work around this, so it is also part of the project.

Captions in “Blackberry Cheers” feature their own language of complex geometric symbols. What made you want to experiment with abstract lettering and is there any way to translate it?

EB: Due to the project being abstract, I didn’t want anybody to be able to read it or give it a sense of story straight away. However, I wanted it to be a comic book, so it had to have bubbles for text. So I came up with this language that prevents the reader from understanding the captions, but maintaining the idea that it is a graphic novel. The language can be translated, although it is not a necessity as one bubble doesn’t match the next one in continuity. The whole text is made up of random thoughts and ideas I had during the making of the book. I think I want to explore this a bit more, before exposing the method on how to translate.

Given the chance, what project would you most like to pursue as a comic artist?

EB: This is a very tricky question:I would really like to be able to create whatever I have in mind and that I enjoy doing. For example, “Lobster Paradise” and “Memories from Limón” (the winner of Cape/Comica/Observer Short Story Prize) share a lot with the graphic novel I’m writing at the moment: themes of life in Costa Rica and Latinamerica. “Blackberry Cheers” is the complete opposite of that, and I would like to write a longer project following that same graphic and experimentation. And I also have a “not so regular” comic strip called “Collage Sandwich” which is a four panel humorous strip about sex and the taboos that surround it, which I would eventually like to publish. 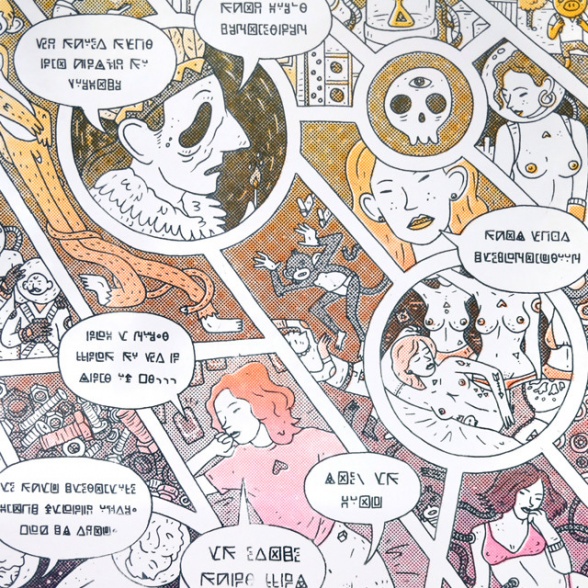 EB: The thematic ideas and stylistic ones came at the same time, but back then, it was just a project done in ink, where I worked one page at a time. I experimented with different colour techniques to find the appropriate one. It was about 18 months after having done the first page that I was experimenting with screen printing when I had the idea of finishing the project this way. When I screen printed the first page, exploring the colour mixing and seeing how it came out, I knew this was the way to do it. I also had a creative challenge long before I began drawing/writing this, which was to do a whole screen printed book, and “Blackberry Cheers” came to be the one.

In the future, do you want to continue making pieces with non-conventional design choices as you have in “Blackberry Cheers” or would you prefer to work primarily with pencils, similar to those in your graphic novel “Lobster Paradise?”

I want to do both, and more! I think I like to write and experiment, and given the time I would pursue any project that makes me happy. Sure, “Lobster Paradise” has been bought in 3 languages and I get to earn royalties if it does well (let’s hope for it); and “Blackberry Cheers” is just a 10 copy run, but I’m very proud of both; so I don’t think I could decide which one I would prefer to continue making. At the moment I am working on an adventure Point-and-Click game called Dude, Where is My Beer? which I co-wrote, and I have just recently written a children’s book for my wife to illustrate and both of these really excites me as well. I also write short comics for myself and for La Tundra magazine in London. The only thing I’m sure of is that I love writing, and graphic novels are my preferred outlet at this moment. 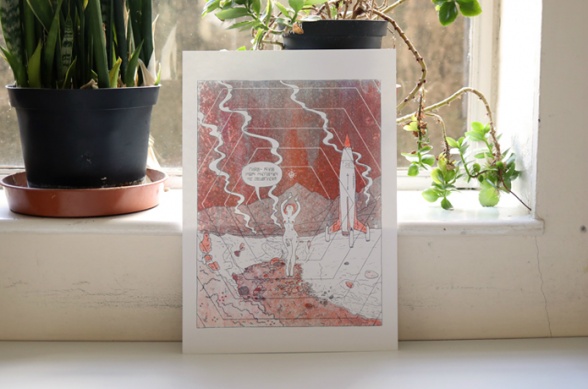 What have been the most rewarding and most challenging parts of making “Blackberry Cheers?”

EB: I would say managing to finish an all screen printed book in A3 format, it’s a big one. It was not an easy process, but I got into the rhythm of it and it was very fulfilling. Binding it was a tricky one as well, but I’m very happy with how it came out. Although having said that, there are other ways I would have done it having gone through the whole process; which I will have to take into account when I do a similar project in the future.

You’ve called “Blackberry Cheers” a ‘non-narrative’ piece. What drew you to release it as a graphic novel rather than a series of independent artworks?

EB: The “book” is what drew me to release it in this format. I love books, and I keep buying more graphic novels and comics then I can read. So everytime I start a project I think if it’s possible to make it a book. “Collage Sandwich” has maybe 12 strips at the moment, but I’m already thinking about how I want to publish it once I get to a 100. Dude, Where Is My Beer? is a computer game, but I want to release a “The Art of” book later on. It’s just my passion, I can’t go into a bookshop without wanting to buy everything.

Who are your greatest inspirations, both artistically and personally?

EB: I get inspiration from a lot of people without necessarily knowing it. I watch a lot of movies and TV, which I believe is part of my job, haha, as I know plots and stories just sink in and enhance my learning process. But more specifically:

Personally: I draw a lot from my family, especially storywise, and especially from my grandparents.

Do you have any plans for a wider release of “Blackberry Cheers” outside of its prestige format?

EB: Not at the moment, but I wouldn’t be opposed if it gets picked up someday. It would actually be great. 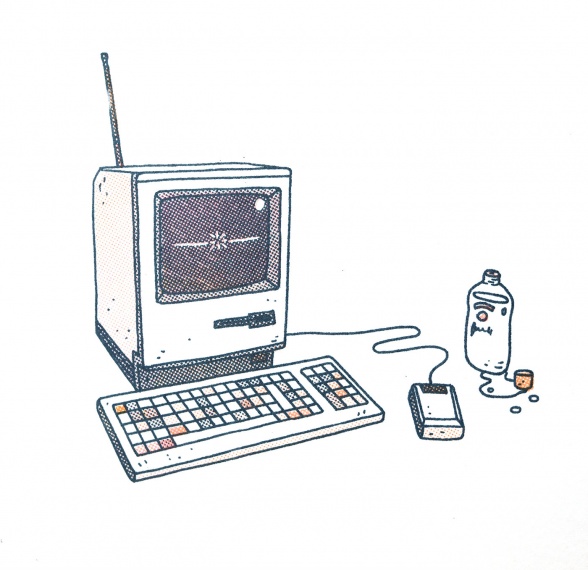 What do you hope to do after “Blackberry Cheers?”

EB: I think the most advanced project I am in is Dude, Where Is My Beer?, but it is still at least a year from the release. I am also writing another graphic novel, which I hope to start illustrating by February-March next year. And that will take me another year? So, I’ll probably come up with a shorter project in the meantime which I could self-publish, or just continue with short comics.

You can support “Blackberry Cheers” here or visit his website.