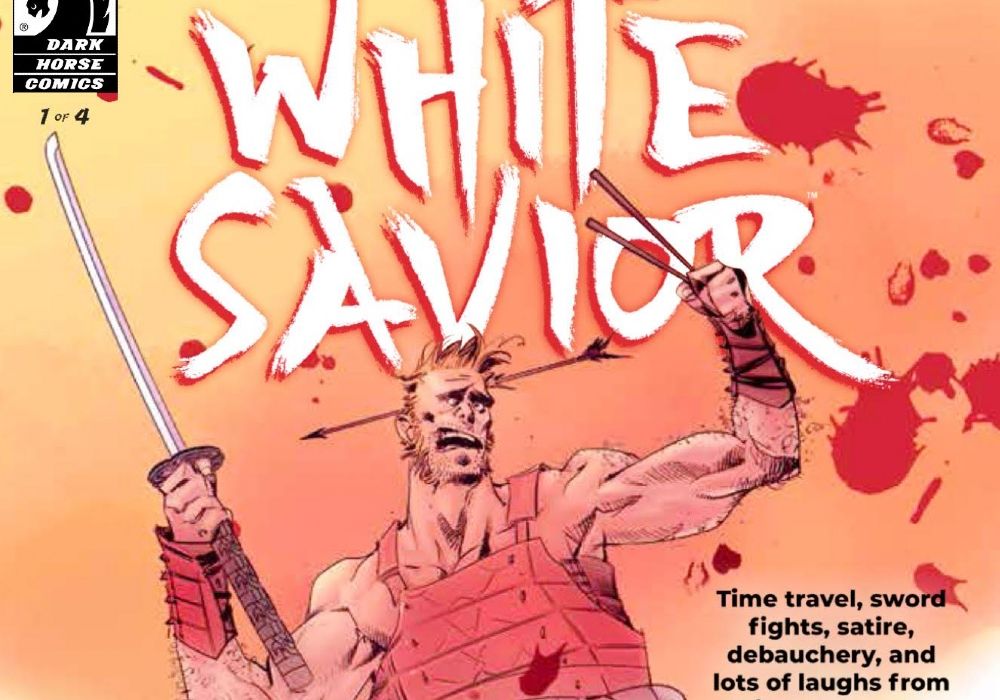 You know the trope. In The Last Samurai, a group of samurai rebel against the emperor of Japan and his newly created imperial army as feudal society crumbles around them. Charging into battle against the new regime and its complete disregard of tradition is Tom Cruise. In The Great Wall, creatures known as the Tao Tie terrorize Song Dynasty era China, fought back by an ancient order known as The Nameless Ones. The creatures are finally defeated thanks to the mercenary Matt Damon. These and other similar very pale heroes get sent up in the new four part miniseries from Dark Horse, “White Savior.”

Written by Eric Nguyen and Scott Burman, with art from Nguyen, “White Savior” follows modern day college professor Todd Parker as he travels back to Feudal Japan to meet Capt. Nathan Garin of the United States Army, thought to be the snow-colored skinned savior of prophecy. Garin also happens to be an obnoxious blowhard who dooms the entire village of Inoki after charging directly into a volley of enemy arrows. So he isn’t exactly the brightest.

We spoke to Nguyen about the book, working with Burman, and how much of a disaster human the title “savior” actually is. And he may have called out a particular excellence of execution towards the end. We’d like to thank him for his time. 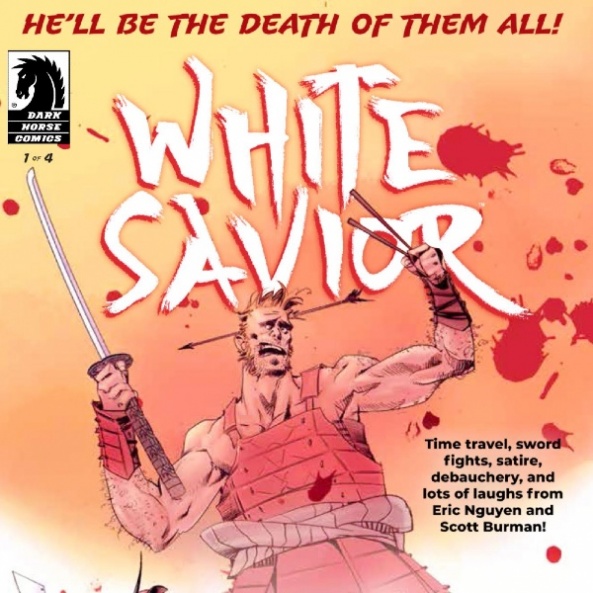 You’ve been active in the comic industry for decades. How long have you been wanting to make this book? Or at least address the trope?

Funny question, because the answer isn’t what you think. I never really thought about addressing the white savior trope or making a book with social issues, or anything like that. I just wanted to work on something fun. And to try my hand at both comedy and writing for the first time. My co-writer Scott and I were brainstorming, and when we thought of this idea, the social implications didn’t really occur to us much until we started writing. Honesty, we just thought it was a super funny idea – what if the “white guy destined to save everyone” was actually an idiot? We think it’s a universally funny idea, but looking at it from a different lens, we kind of learned early on that the topic was obviously more important than we initially intended it to be.

The protagonist is a present day film professor. Was the fish out of water dynamic something you wanted from the beginning? Or did it evolve naturally as the best way to explore and satirize the trope?

Great question. I think it definitely evolved as the best way to satirize the story. We realized that if Todd Parker, our main character, was from the future, then he would know for a FACT that the “white savior” is the exact opposite of a savior. And a lot of the humor in our story is using Todd as a sounding board who can call out so many aspects of the antiquated “white savior” trope.

Not to spoil too much for the rest of the series… but how big of a train wreck does Nathan Garin end up being?

I wouldn’t say he’s a train wreck… he’s more like the Hindenburg… or the Titanic… or the demented love child of Thomas the Tank Engine and your drunk uncle who hurled all over the Thanksgiving turkey.

You worked with Scott Burman on the script. What was the writing process between you two? Was it more of a back and forth? Or did you have your own specialities?

Scott is a maniac, and I mean that in the best possible way. Throughout the whole series, he only gave me one note, and that was to “kick ass.” We used a lot of the Marvel method – we created a basic outline and script, I’d draw the pages, and then Scott and I would come together and litter the pages with jokes. There’d be a panel, and Scott would throw seven different jokes at me, and they were all funny. And we just riffed back and forth to create the best one for both the page and the story.

You’re also doing art for the book. And one thing I noticed in the battle scenes was how scratchy the linework became. What was your overall approach to the look and feel of the book?

I’ve been doing dark, gritty artwork for so long that it was actually a renaissance back to the original way I used to draw. My first work in comics was a book called Strange Girl with Rick Rememder from Image, and I wanted to get back to that kind of RAW creativity that I had when I first broke into comics. I think the transitions from scene to scene, and juxtaposing the past and present, really give the series a nice beat.

That may be true. But did you also notice some of the characters’ names may or may not stem from other famous Japanese wrestlers, including Yoshihiro (Tajiri), Kenzo (Suzuki), and in the next issue you’ll meet Hiroshi, Masato, and Taka. And I think using a wrestling analogy might be the best way to end this interview – so I’ll just say, White Savior is the best there is, the best there was, and the best there ever will be.