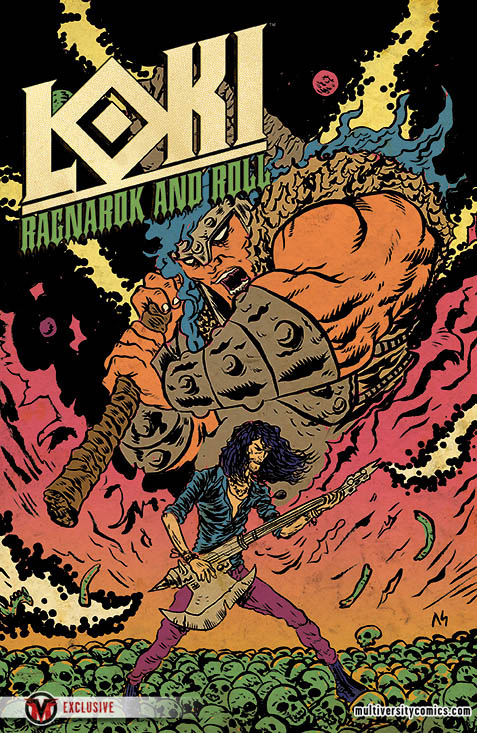 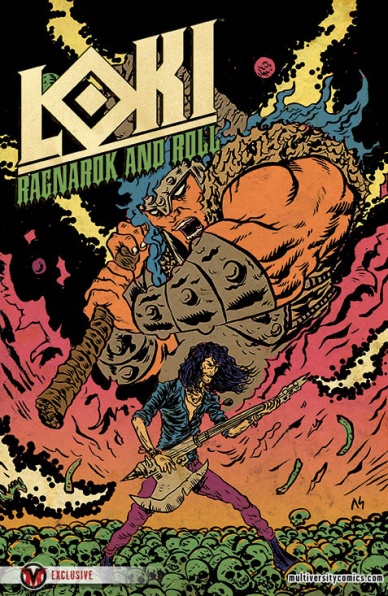 Last year, “Thor: Unkillable Thunder Christ” rocked our world completely out of the blue with its take on the famous god of thunder, offering up a hilarious and memorable one-shot comic from an up-and-coming creator.

Well, today we are pleased to announce that more is coming, as Eric Esquivel is returning with “Loki: Ragnarok and Roll.” Starring the famous god of mischief as he is cast out of Asgard, he winds up finding solace with a bunch of metal heads. For real. I hope you guys like throwing up devil horns, because it’s going to be a shred-fest.

We chatted with Eric about his return to Norse mythology and what it means for the end of days to be found in rock n’ roll.

So after rocking the world with “Thor: Unkillable Thunder Christ,” what led to the decision to rock the world again – literally – with “Loki: Ragnarok and Roll?”

Eric Esquivel: I want to build a better God.

“Thor: Unkillable Thunder Christ” centered on the idea of a violent deity—one who would rather pick up a hammer and smite evildoers than allow himself to be nailed to a cross by them as part of some vague, easily misinterpreted performance art piece.  It was very much Thor as blue collar Bruce Springsteen, vs. Jesus as Lady Gaga in a Meat Dress.

When I wrote “Thunder Christ” I had recently been jumped by a bunch of guys, and I was fantasizing about being able to pray to a supreme being with a magic meat tenderizer who was willing to teleport down to Tucson and take care of business for me.  It’s a simple idea.  Something that could be said in a one-shot.

“Loki: Ragnarok and Roll” is a more sophisticated, more nuanced, infinitely better story.  It’s inspired by real life “rock stars” like Hunter S. Thompson, John Lennon, and John Stewart (the Daily Show one, not the “Green Lantern” one) who, when they’re confronted by violence, hypocrisy and fascism, respond by making art about it.  By changing the paradigm that allows it.  By making millions of dollars poking fun at it.

You want real revenge on your enemies?  Any old chump can throw a punch.  Write a record that’ll change the world…and don’t invite them to the party.

What is it about Norse mythology that you as a writer find particularly appealing, especially in a modern setting?

EE: I’m way into Joseph Campbell, and his idea of “The Monomyth”–the idea that all stories are basically the same story, from Star Wars to The Torah to the third episode of the second season of Boy Meets World.

It’s insane to me that every religion ever created—these stories that were written thousands and thousands of years ago, millions of miles away from each other—are still relevant.  That’s either proof that Gods and monsters really exist, or it’s proof that we’re all more alike than we could ever imagine…and either reality is beautiful to me.

Viking archetypes and heavy metal have often found a way of intersecting within pop culture, but what do you find interesting about the crossover potential there?

EE: Metal doesn’t care where you came from.  It doesn’t care what name your parents gave you, or how much money you’ve got in your pocket.  If you want to smear grease paint all over your face and call yourself “The Demon”, then we’ll call you The Demon—so long as you’ve got the shredding skills to back it up.

The Metal community is the perfect place for Loki to find acceptance, escape his villainous “hometown” reputation, and reinvent himself as the hero he always knew he was.

Comparatively, how does the Loki book match up to your Thor book? Are they related, or two separate entities?

EE: “Thunder Christ” was Blitzkrieg Bop by The Ramones–a dumb, two minute pop song to listen to in between Algebra and AP Gov.

“Ragnarok and Roll”is Tarkus, by Emerson, Lake and Palmer.  It’s the nearly-half-hour-long medley of strange sounds you’ve never heard before that was playing in the background on that radio in the van with the armored unicorn airbrushed onto the side of it where you lost your virginity.  It’ll change your life.

The “Thor” book is pretty decidedly a humor book starring a character people have grown not to see as funny, but Loki is literally a trickster. Does this make it easier to write a comedy title or more difficult given any assumed bar that potentially exists?

EE: It definitely forces me to write a lot smarter than I actually am.  Loki isn’t just some clever dude–he’s THE GOD OF CLEVER DUDES.

I legitimately wrote a little prayer that I say to Loki whenever I sit down to write a script.  Hit me up at comic con and I’ll teach it to you (if your Mom says it’s okay).  Bring a sacrificial goat.

I feel like the “Thor” book was partially commentary and partially rocking-good-Barbarian-fun-times. Is your “Loki” book similar in scope, or is this more focused towards the fiction than the reflection?

EE: The only thing worse than a book with nothing to say is a book with too much to say.  It’s a fine line, but hopefully my readers (from stuff like “Bravest Warriors,” “Freelancers,” and “Boo!”) know that I’m more than capable of walkin’ it.

My conflict with this book, as a writer, is that I’m pretty much equally into the philosophy stuff and the Gods-murdering-each-other-with-guitars stuff.  It’s a good problem for me to have, and my scripts are better for it.

The last book you did had art from Ander Sarabia, but “Loki” will feature Jerry Gaylord. How does Jerry’s art style fit towards the ideas of the book?

EE: “Ragnarok and Roll” is a candy coated atom bomb that’ll obliterate everything you know about the nature of reality.  Jerry is the delicious sugar that makes the medicine go down.  There’d be no book without that guy.

Have you read “Fanboys vs. Zombies?”  Jerry Gaylord can scare the living bejesus out of you, make you fall in love, and bring you to tears all in the same panel.  He’s an evil wizard, and we should all be very, very afraid of him.

Since the comic book medium doesn’t offer any sound, how do you find the challenge of working music into the comic? And how do Jerry’s visuals help with that?

EE: The great thing about that is that, since you can’t actually hear Loki’s band (“The Tricksters”), if you don’t like how they sound then IT’S ALL YOUR FAULT.  We’re pulling from your personal ideal.  If you want them to sound like Placebo, of Three Inches of Blood, or even The Dixie Chicks…that’s totally cool.  You’re your own DJ.

If you’re interested in what I think Loki and The Tricksters sound like, stay plugged in to my social media (@ericMesquivel on Twitter).  I plan on releasing “recommended play lists” whenever a new issue drops.

Obviously Thor and Loki are more in the public eye than ever before thanks to a couple indie films in theaters. Do you find this a burden on your interpretation, or does it actually help out?

EE: The concept that Loki is fictional is actually a pretty recent phenomena.  What if he’s real?

What if he’s real, and he’s unhappy with the way those movies have depicted him thus far (as a greasy-haired, constantly thwarted, cackling mini-Hitler)?  What if “Ragnarok and Roll” is the REAL Loki working through me to respond to those slanderous bits of propaganda?

It’s something to think about, isn’t it…?

For the full solicit for “Loki: Ragnarok and Roll”, please see below.

WHY WE LOVE IT: Up-and-coming writer Eric Esquivel first caught our attention with Thor: The Unkillable Thunder Christ, and wowed us with his work on FREELANCERS. When he told us he wanted to bring those sensibilities to the trickster god Loki, we had to say “Yes!” Pairing him with FANBOYS VS ZOMBIES artist Jerry Gaylord sealed the deal.

WHY YOU’LL LOVE IT: Loki steps out of the shadow cast by his thunderous brother as Norse mythology crosses over with the only thing on Earth as wild and crazy…rock and roll!

WHAT IT’S ABOUT: What happens when Odin banishes Loki to Earth? He finds a world of outcasts that appreciate his style! While his kin sharpen their weapons, he picks up an electric guitar.