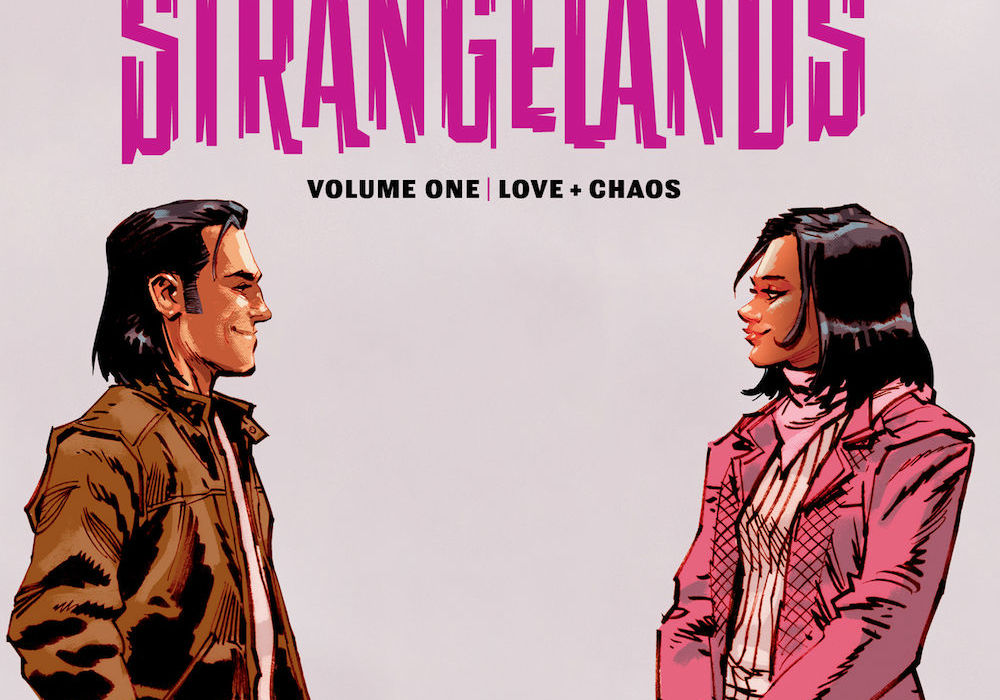 Earlier this year, “Strangelands” debuted from Humanoids, as part of their H1 shared universe. This week, the first collected edition dropped; to celebrate, co-writer Darcie Little Badger put together a Spotify playlist to accompany your reading of the book, which we can reveal, along with her exclusive commentary, below. 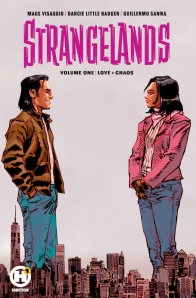 Two strangers find themselves inextricably tied together by inexplicable superpowers. Fighting their connection could mean destroying the world.

Opposites attract? Elakshi and Adam Land aren’t married. In fact, a month ago, they were perfect strangers, dwelling in lands foreign to one another. But now, they’re forced to remain by one another’s side, for their separation could mean the planet’s demise. Their greatest challenge is to stay together — even if they have to tear the world apart to do so.

RHYTHM IS A DANCER (Snap!) – Adam and Elakshi, the protagonists of STRANGELANDS, are ballroom dancers who came into their powers on a chaotic dancefloor after a night of tango, waltz, and gunfire. The first song on this playlist celebrates the power of dance: the interplay between bodies and music and the instinct to move with a beat are bone-deep and in the air.

THIS MUST BE IT (Röyksopp with the vocals of Karin Dreijer) – Like many of the songs on this list, the lyrics of “This Must Be It” involve dancing, but that’s not why it was chosen. The warring themes of acceptance and uncertainty in this song reflect Adam and Elakshi’s precarious situation. Although they aren’t sure what will happen in the future, their hope for a better life sustains them.

HOLDING OUT FOR A HERO (Bonnie Tyler) – Adam and Elakshi spend much of their journey looking for a savior who can “cure” their explosive powers. But will they find a hero?

TWO OF HEARTS (Stacey Q) – Adam and Elakshi might as well share one heartbeat, since they cannot live without each other.

EVERYTHING IS AWFUL (The Decemberists) – Sometimes, life on the run from a homicidal secret agent can be truly awful. Especially when obstacles such as pain cults, dreadful weather, and weapon-developing scientists complicate matters.

DON’T WORRY, WE’LL BE WATCHING YOU (Gotye) – Reliant on a mysterious benefactor named Kittyhawk who tracks and controls their movements, Adam and Elakshi have very little privacy. No worries. It’s for their own good. Right?

SUITS ARE PICKING UP THE BILL (Squirrel Nut Zippers) – In this case, the “suits” are most definitely Kittyhawk.

TERRIBLE THINGS (April Smith and the Great Picture Show) – Adam and Elakshi may not mean to cause harm, but when they touch or are separated, terrible things happen anyway.

HEADS WILL ROLL (Yeah Yeah Yeahs) – A song about dancing ‘til you’re dead can’t not be on a STRANGELANDS playlist. C’mon!

FOLLOW YOU (Mystery Skulls) – When it comes to Adam and Elakshi, who is following whom?

ROSITA (TANGO) (Beat Circus) – This unique interpretation of tango music represents Adam and Elakshi’s evolving relationship with their superpowers (and with each other). They can’t dance together like the old days, but that doesn’t mean they can’t dance at all.

BLACK HOLE SUN (Soundgarden) – Adam and Elakshi cannot run forever. They need to make a choice. A change. But is the black hole sun a metaphor for a new life, like a phoenix reborn from the ashes? Or does it signify complete annihilation?