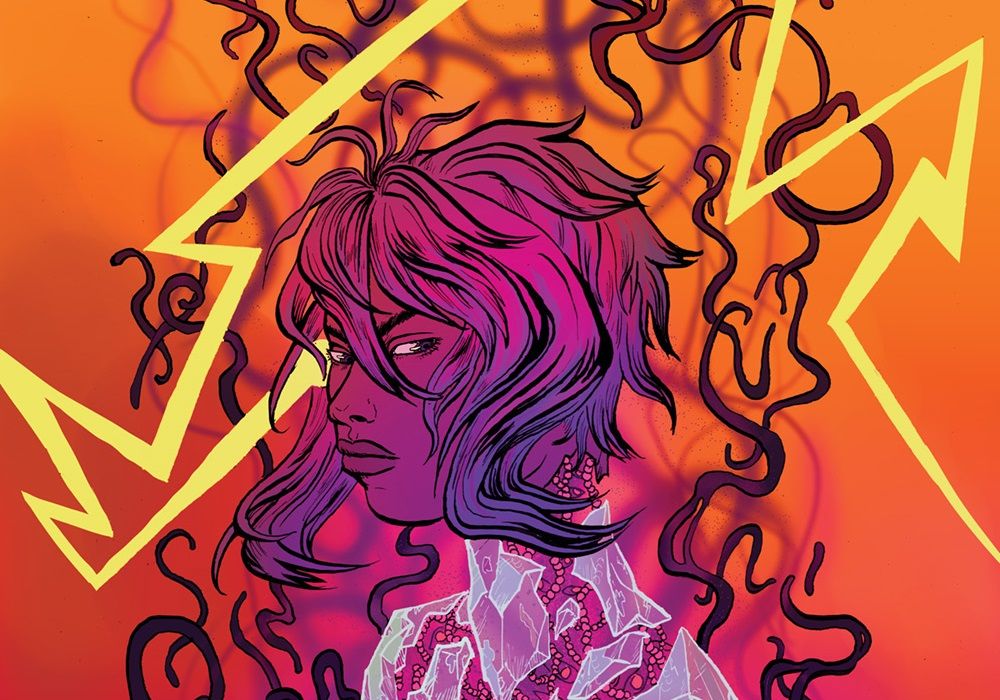 Sloane Leong’s art showed up up for the first time in the mainstream with Image Comics in “Glory #32.” Now this March, this self-taught cartoonist, artist, and writer is set to debut her first solo series, “Prism Stalker,” also with Image Comics. The series follows the story of a “young refugee raised away from her devastated home planet as an indentured citizen in a foreign colony. ”

To learn more about this new series we were able to speak to the creator herself, Sloane Leong. She talks about building her world and characters, being the singular voice on a series, and the series’ animated trailer. Below you can find out interview with Sloane and you can find issue one of “Prism Stalker” in stores this March 7th.

In the rundown for the series its described as a series “for fans of Octavia Butler, Sailor Moon, and the biopunk horror of David Cronenberg.” All those are awesome, so what in the world is “Prism Stalker”?

Sloane Leong: Prism Stalker is a psychedelic weird sci-fi biopunk adventure! It follows Vep, a young refugee raised away from her devastated home planet as an indentured citizen in a foreign colony. We come upon her as she’s forcibly enlisted into a new military endeavor to colonize a strange new planet on the borders of the galactic society. It’s action packed, focusing on psychic martial arts that exists only on this new planet, but also introspective, exploring themes like  colonialism, identity, tradition, duty, and agency.

Looking at the cover and flipping to the first page, this book has such a striking look and style. How do you settle on the look and feel of this series?

SL: I’m leaning into my manga roots with this visually more so than a lot of my other comics. There’s always been a kineticism in the manga I love, a vivacity to the movement and speed of the line, and I finally felt ready to take a stab at it myself. Chromatically, I wanted to go hyper-tropical, embrace a that bright aesthetic I love that you hardly ever see in sci-fi and use colors as communication and symbology within the world and non-diegetically.

This series is the type of sci-fi and storytelling I am a huge fan of where the reader is dropped into a world already in motion. How have you approached introducing readers to your story and world without breaking up the pace or creating a lot of exposition?

SL: Vep, our lead character, is being thrown into these new spaces along with the reader so they get to discover the world together. However, she not a blank slate. She has a strong perspective on the world and its deeply colored by the trauma of displacement, her filial duty and her own desires.

Just looking at the complexity of the pages it seems like this is a story helped by your control over the story, dialogue, and art. How has it been being the “writer” and “artist” on this series? Is it a different working style for you than if you were just handling the art duties?

SL: Collaborating is fun but there’s nothing better to me than a singular voice being able to express itself in this medium. The layers of information an artist can convey, consciously or not, through comics from a single voice is one of the true highlights of the form. Being able to finally dive into this project I’ve been whittling away at for several years with full creative control is a dream come true!

Sci-Fi often works well when it feels familiar but just a bit fantastical. There is a lot of that coming from the character and creature design in “Prism Stalker.” Have you looked to anything as the inspiration for your creations in this series either in the world or other works?

SL: Totally. I love anthropology, biology, and animals, so a lot of the alien cultures you see are hybridized derivatives of flora and fauna. I try not to get too deep into the rabbit hole with building these alien communities and obsessing over ecology but its a foundation I’ll hint at as the story goes on. From other works, Butler is big as she is one of the few visionaries that had a unique take on aliens and biotechnology and comics like Prophet and the work of Moebius. There’s also cyberpunk works I draw from for their epic scale, like Battle Angel Alita and Blame!.

From everything I have enjoyed about your previous work, this is a series that feels very much what I want from a Slone Leong story. What makes this a story you wanted to tell and what’s your goal for the series?

SL: Despite its colorful flashy dressing, I’m really trying to convey my personal experience through Vep’s story and dissect and explore literal systems of oppression in a figurative way that feels accessible but still specific and nuanced. In science fiction especially, the perspectives of indigenous peoples is usually put to the side in favor of a more western-centric protagonist and perspective or depicted in a stereotypical manner. I want to put that native perspective front and center. SF stories that focus on native mindsets like family, community, connections to the land, and spirituality are few and far between. And then theres the struggles of being psychically dislocated from your people, history and land, uncertainty of identity and the inner fight to contain an individuality that cannot ever seem to be whole.

I am always interested in how much goes into the world building for a series that is not necessarily makes it on the page. This is a world that seems lush and developed and whether its explained on the page the characters understand it. Do you have a larger idea of the world than you might ever put on the page?

SL: Definitely, and I might elaborate more on that in back matter throughout the issues. I love coming up with off the wall biology and alien cultures based on natural ecosystems and figuring out how they accommodate one another in this semi-utopic galaxy in Prism Stalker.

At the center of this unique world is the character of Vep. Who is she in this world and what makes her story one of interest to readers?

SL: Vep is a young adult whose been forced to flee from her home planet, compelled into providing labor in exchange for shelter and then forced into military service. I’d say that feeling of instability and constant bombardment of unexpected tragedy is pretty salient right now. No one feels like they have control over the systems that they are pressured into, be it capitalism, racism, misogny, and Vep feels the same. Those in power demand of her to serve, to identify herself a certain way, to choose a path that they have guided her towards, and these institutions all seem invulnerable, especially when the universe around her is falling in line.

There’s this psychiatrist/rationalist/writer I really like, Scott Alexander, that said: “The reason our current system isn’t a utopia is that it wasn’t designed by humans. Just as you can look at an arid terrain and determine what shape a river will one day take by assuming water will obey gravity, so you can look at a civilization and determine what shape its institutions will one day take by assuming people will obey incentives.

Vep’s story is her realizing that these institutions and powers aren’t as unbreakable as they want to appear to be but also, that forging a path yourself outside these institutions isn’t always easy, clean or clear, especially on a planet-wide scale.

Has working on this series with full creative duties allowed you to experiment more with your style?

SL: Yes! I feel like my art is getting more dynamic and I’m taking more risks with my layouts as I construct action scenes. I also feel like I’m pushing my boundaries on how to convey inner dialogue and narration, inspired mostly by shoujo and josei manga, a really intimate genre of comics. I always love when a comic puts a microscope into a characters mind and expands on their thoughts and feelings but I think Americans often shy away from that, opting to show not tell, or finding it to naive. Personally, I love some good inner dialogue.

What do you hope readers experience and take away from this series?

SL: I hope readers resonate with Vep and her story even as specific as her struggle is. I want it to be restorative and heart wrenching and I want them to feel like they can dig into the unique properties that makes them who they are and express that, not hide it. I want us to refract ourselves through each other into an endless kaleidoscope of possibility.

The promo video for the series is insane. How did that come about? Is something like an animated adaptation something you would like to see for the series? (because after watching the video I absolutely do!)

SL: I would LOVE to have an animated series or feature of Prism Stalker! I’ve dabbled in animation growing up but, being unschooled, it just wasn’t a viable option for me. Comics is a great middle ground being able to have full creative control and a financially accessible medium that still conveys all the fire and life that animation can.

ANYWAY, yes the trailer is SO RAD and animated by Jonathan Djob Nkondo, an amazing cartoonist and animator! He was kind enough to work his magic and make this sick amalgam of scenes from the first arc of Prism Stalker. I’m hoping to do another animated trailer for the second arc at the end of the year!