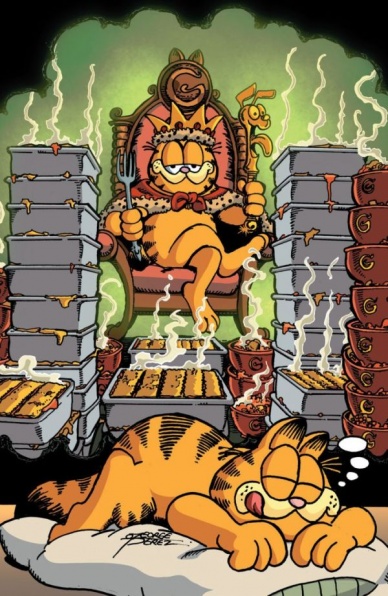 Debuting June 19, 1978, Garfield has been a regular staple figure in all our lives. From his legendary hatred of Mondays to his penchant for excessive eating, there’s not much about Garfield that we can’t all relate to. He is, in many ways, the epitome of the American Dream.

As such, hitting shelves next week on the 7th, BOOM!’s “Garfield” ongoing hits its 25th issue. And to celebrate, BOOM! is kicking it all off with a big anniversary 2-year over-sized special  featuring stories by Mark Evanier and Andy Hirsch, as well as Scott Nickel and David DeGrand. Oh, and a variant cover by George Perez to celebrate the King Cat’s epic issue.

Read on as we chat with Andy Hirsch and David DeGrand about everything you ever wanted to know about Garfield (but were too afraid to ask).

As BOOM!’s press release said, it’s been “two years of the fat cat!” First off, obviously this is a big and exciting anniversary issue, so how does it feel to spend time with Garfield for this milestone? 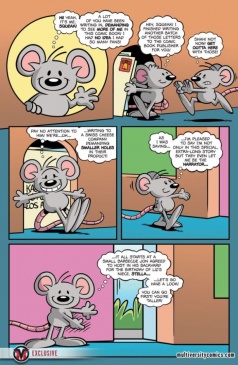 Andy Hirsch: Pretty good! Garfield was probably the first comic I got really into as a kid. For me, the newspaper was a free comic book that came every day, and the books – those “Fat Cat 3-Pack” printings especially – were something I could afford on my allowance. It’s kind of fitting that Garfield would end up being the first ongoing series I’ve worked on. Things have come full circle, so I guess it’s time for one us to radically reinvent himself.

David DeGrand: It’s quite the honor to be a part of this anniversary issue! Garfield was the first comic strip I remember that I attempted to copy in order to learn how to draw cartoons when I was ten. I created my own characters and drew them in the Garfield style, it was all I did since I couldn’t play sports. Drawing Garfield comics as an adult is pretty mind blowing when I think back to how much of an influence the comic strip was on me as a kid. I still draw Garfield closer to the style he was in when I was drawing him all those years ago.

A character like Garfield certainly has popular eccentricities, and we know he’s a connoisseur of fine lasagnas. Have you found there’s a particularly great recipe works for you?

AH: It’s funny how enduring that myth is. Did you know Garfield actually hasn’t eaten a lasagna on panel since 1983? As for me, my recipes tend to be limited to “heat and serve”.

DD: As long as lasagna contains meat, cheese, pasta, and tomato sauce, you’re pretty much doing it right. Those weirdos that make vegetable lasagna should just stick to salad, which is like Garfield’s Kryptonite. 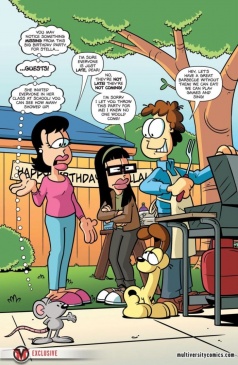 That said, do you guys worry about Garfield’s eating habits? As a cat owner myself, I’ll note that by now I probably would’ve taken him to the vet.

AH: It seems to me that we’re looking at several possible situations here. Is Jon dating Liz the vet as a ploy to get discounted care for his astonishingly unhealthy pet, or has he been intentionally overfeeding Garfield for years just to have an excuse to see her more often? Maybe the fact that Garfield’s still kicking despite his eating means he’s really the healthiest of us all. Could it be the preservatives? I don’t think we should pull at this thread any further.

DD: Although Jon has taken Garfield to the vet on numerous occasions, his obesity never seems to be much of a concern. I’m not one to question the credentials of cartoon veterinarians, so I’ll assume he’s in decent health.

Garfield certainly has an impressive and fun legacy in comics, and the twists and turns and shocking game changing reveals of this BOOM! series have been quite astounding. So far, what has been your favorite addition to the overall Garfield mythos?

AH: I very much like the idea of a “Garfield mythos”. Can we call Pet Force and U.S. Acres part of the “Garfiverse”? Speaking of the farm, and I know they were introduced long before our book, I do always enjoy a visit with Jon’s family. Whether Jon and Garfield go to visit them or the other way around, that always shakes things up. Is there any cat less fit for farm life than Garfield?

DD: The Lasagna Monster by far has been my favorite contribution to the Garfield mythos. He was just a goofy idea I came up with for a variant cover, and it’s been a blast drawing Garfield battling him as well as his other food monster allies. I like to think that I’ve contributed probably the weirdest character into the Garfield universe. Or the messiest at least. 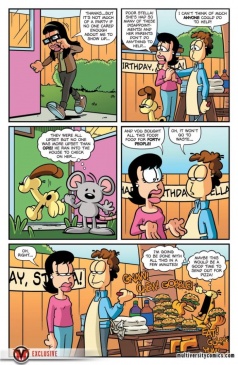 I think Garfield has a lot to teach us, but what do you think is the most profound lesson you’ve learned from working with him so far?

AH: I’ve taken to mailing my enemies to Abu Dhabi, and I’ve never been happier. One has to cherry-pick from his teachings, though. If I took them all to heart I’d never make it out of bed long enough to finish an issue.

DD: Well besides Garfield helping me learn how to draw, he also has a lot to teach in regards to how to remain sarcastic in any situation life throws at you. Nothing gets you out of a sticky situation quicker than a well placed acerbic comment.

Garfield has been in comics for about 36 years now. At what point do you think he’ll get over his hatred of Mondays? How long is too long to hold a grudge?

AH: Monday is going to have to apologize first. It knows what it did.

DD: I’ve often wondered why Garfield hates Mondays so much. It’s not like he has to get out of bed and go to a job or anything. I think there’s a dark history between Garfield and Mondays that perhaps we shouldn’t delve into.

Garfield’s been around for quite some time and there’s still a lot to be done with that fat rascal. So, in all seriousness, what do you think is the continued appeal of Garfield?

DD: I think Garfield’s enduring appeal is simply the fact that he’s so relatable. Everyone hates Mondays, and I think most people would prefer to sleep all day, eat awful food, and torment the annoying ones in our lives with little to no recourse. Garfield can be seen as an escapist fantasy in that regard, and I think people respond to that without realizing it.

AH: Garfield has two very basic motivations – food and sleep (the order is up for debate). I think people can’t help but relate to him on that level, you know? So until science cooks up a replacement for those, Garfield’s got something in common with everyone. 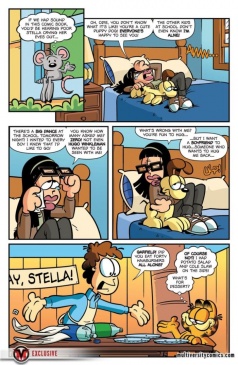 Also, be honest: are you a Garfield person, or are you more of an Odie person?

DD: When it comes to flesh and blood animals, I’m a dog person all the way. But in the Garfield world the fat cat wins me over. Odie is great and all, but at least Garfield is self aware enough to make sarcastic observations about the futile lives they live as house pets.

AH: I’ve got to say Odie, which means I feel terrible any time I have to draw Garfield being mean to him. Although… am I remembering wrong that at some point Odie was shown to actually enjoy being kicked off of tables? I guess he’s more complicated than he appears.

To what extent do you find that Garfield is simply the lens through which we observe and come to grips with our own fractured acknowledgement of our humanity, of our souls?

DD: I think you may be reading a little too much into a simple comic strip about a lasagna eating cat. But I do think there are parallels to be drawn between Garfield and Plato’s Allegory of the Cave, of which I won’t delve into for fear of blowing the minds of our dear readers.

Who wore it better: Garfield or Chip Zdarsky?

DD: That is a fine, if ill fitting costume. But Garfield really owns that look better in my opinion. To be fair, I’m not sure if Garfield could pull off wearing a Chip Zdarsky costume: 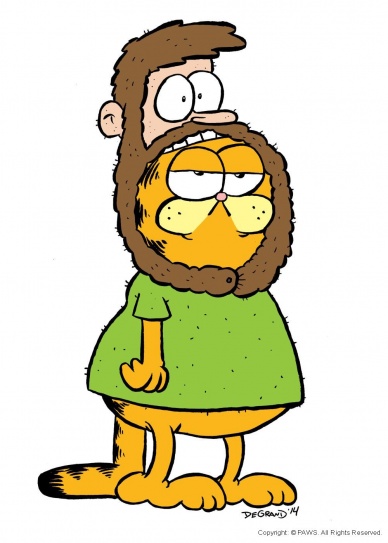 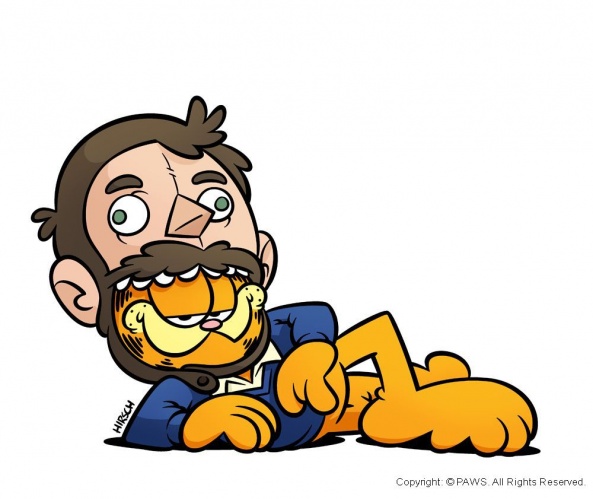 Illustration by Andy Hirsch
Continued below

If you could sit down with Garfield and talk to him about one thing, or tell him anything in the world, what would that be?

DD: I would let him know that, as much as we all hate Mondays, he should probably realize that his life as a lazy cat is the life that most humans only dream about. He needs to realize how good he really has it. 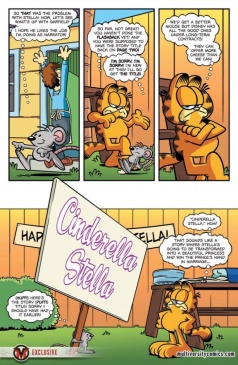 AH: I suppose I’d ask how he reconciles his notorious laziness with the fact that he’s shown up for work every day for the last 36 years. In between sneezes, that is.

And now, the most important question: Is Garfield in fact just a figment of John’s imagination?

DD: That’s a question I can’t truthfully answer. If it’s true, however, then one has to come to the conclusion that there are lasagnas that eat themselves, Odie kicks himself off of tables, and Nermal mails himself to Abu Dhabi. Are we ready to go there?