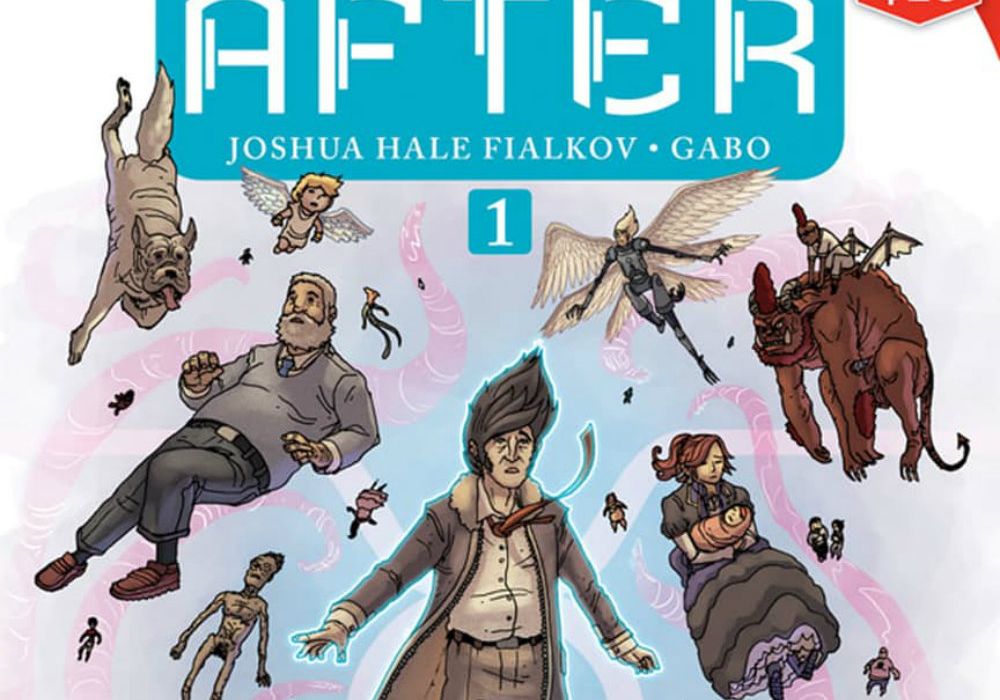 When “The Life After” launched, I jumped into it not entirely sure what to expect. What I got was one of the funniest but most poignant visions of the afterlife I’d ever seen in comic books. Over two years, we watched the story of Jude unfold and go in directions you couldn’t predict. The final collected edition of the series will hit stores soon, but before that Oni Press announced their Square One program. This program is aimed at getting retailers and new readers on board with some of the publisher’s biggest series with select first issues costing only $1 and first volumes at $10. “The Life After” is one of the series part of this new initiative and we had a chance to talk with Joshua Hale Fialkov and Gabo about getting the book in front of more readers and leaving the series behind. 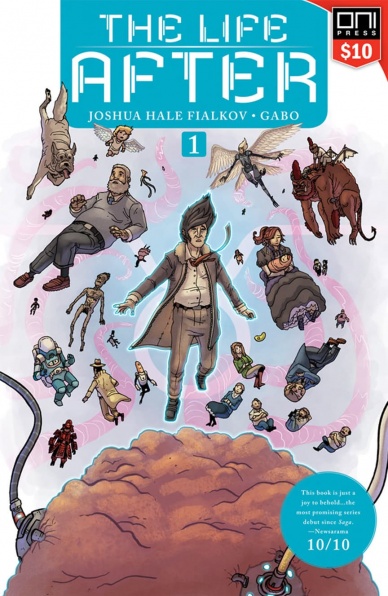 Let’s start at the beginning, how did this project come together and what were some influences on the both of you as you worked on this series?

Joshua Hale Fialkov: I think, and maybe this is a cop out, but, a lot of the influence for me was the people I was collaborating with. Gabo has such a unique world view, and in our conversations and in his work, the book really evolved into something very different than I think I had in mind. What’s, genuinely, the best part of comics, is that the people involved have a very real, very obvious impact on how a book can go. I’d had the raw idea for a while when Richard Starkings introduced me to Gabo, and, as we talked and started to take it all apart and rebuild it, I think we found a degree of love for the characters, the world, and each other that’s very rare. On top of that, Ari Yarwood (our editor) came in and really held us to the fire on the scope and validity of the ideas and character stories. She saw that this was an opportunity to do something special and different, and never let us fall short of that goal.

Gabo: “The Life After” was my first piece of published work that didn’t involve an already developed world, so not only did I have to develop a bunch of things that were literally beyond this world- I also had to step up my game to match the insanely rad scripts Josh was dropping on me. I came in all bright eyed and ready to do anything it took to make a book that would rival anything he had already put out. Little did I know he was ready to break me in two by throwing all sorts of insanely detailed scenes at me. I rose to the challenge and knocked them all down. Influences? The only influences I embraced were his scripts and Ari Yarwood’s vigilant editing and encouragement, they’ve taught me so much.

Did your collaboration change in any ways as the series went on?

JHF: Oh, absolutely. Part of that is just the building of trust and faith in each other. But, the other part, I think, is we all got better as we went along. I feel like Gabo is 1,000x the artist he was at the beginning, and I know that’s true for me. This is the kind of book that one hopes to get a chance to do, and that we did, and did it with such support and love from our readers, our publisher, and each other… It’s just so lucky.

GB: I think Josh was pretty cognizant that this project was going to rely heavily on collaboration, specially with the vast amount of crazy stuff going on. It also meant he was going to have to trust me with the task of turning his wild ideas into reality. I don’t think I’ve ever had this much freedom on a book, it was really amazing. Josh was able to take what I was doing in previous issues and build on them, when I slipped in little things here and there he’d throw them into the story, it was like the best improv session of my life.

The Square One program is aimed at retailers and readers who maybe haven’t had the chance to read any of the great books Oni Press has to offer. Is there any added pressure in being one of these few titles and acting as kind of a flagship title for the publisher?

JHF: James Lucas Jones and Joe Nozemack are two of my best friends. We talk regularly, our families know each other, all of that good stuff. So, from those relationships, I’ve gotten to see the commitment they have to this book, and, frankly, to their whole line. These guys are passionate about the sort of spectacularly singlular stories that Oni creators tell, and, that they see our little book as worthy of the legion of great work that’s come before… Yeah. Humbling.

GB: Oni has so many amazing books that have come out before, during and after “The Life After,” to have it become one of the Square One titles is truly an honor. We’ve felt loads of pressure since issue 1 to make a good product that people will love, and judging by the people who have already read it and have stuck around till the end, I think its gonna be a great hit with the new program. I’m so excited to see it go out to comic shops again and hopefully find some new readers, specially now that the series is wrapped up, they’re gonna love it! 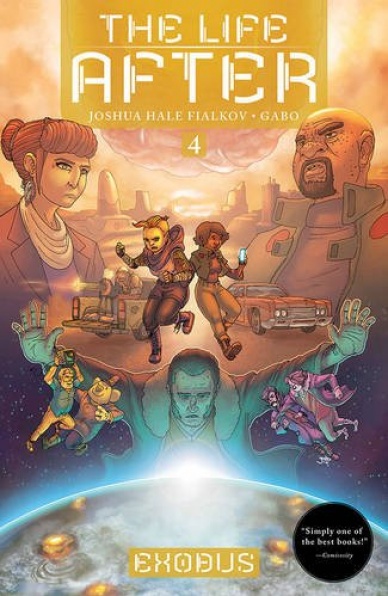 In your opinions, what makes “The Life After” a great first comic book for someone?

JHF: It’s certainly not like any other comic I’ve ever known. And I think it betrays expectations because of it. And, frankly, the humanity jammed up against absurdity shoved in a jacket of oddity makes it something that only works in comics.

GB: There’s no history. You don’t have to worry about reading countless volumes that came before it. You step in with about as much knowledge as Jude has, so when all the weird crap starts going down in issue 1, you feel the same anxiety and confusion as he does. Also it has a giant bunny god who likes to get tipsy, how is that not a great first comic for anyone?

“Square One” sounds like an excellent idea but as creators, are there any other steps you want to see publishers take in order to get comic books more widely sold and in the hands of more readers?

JHF: It’s a hard time right now for comics. While the top of the charts continues to grow, it’s extremely difficult in the middle and below. So, right now, anything that gets comics in hands, I’m for. If we can convince people to give a book a try that they may have passed up, I think we’re doing our job. And, really, the thing I implore retailers and readers alike is if you like something, SAY SOMETHING. It’s almost impossible now to figure out how to get anyone’s attention, especially with the daily freak show of politics. The only way to combat it is by word of mouth. Sharing things we love.

GB: Honestly, everyone at Oni works so damn hard to get these books out to people that at times I feel like I’m not doing enough to get it out myself. At the end of the day the publisher can only do so much before it comes down to the readers and the book stores. It’s the circle of life, we tell you and the shops about a great product, ya’ll buy it, love it, spread the word, more buy it and love it, we get money, we eat, pay bills and then make more comics that ya’ll love. We as a people can make changes, specially in great numbers- if we want comics to get better- we all need to pitch in!

With the last volume due to come out soon, is there anything about the series you wish you had done differently? Something you would have written or drawn differently, for instance?

JHF: I try not to think about that stuff, otherwise, I’d end up redoing everything. The other thing I love about comics is that because of it’s collaborative nature, the path we walk towards our destination can take some very odd twists and turns. And, those twists and turns, for me, are the best part.

GB: I learned a long time ago that you need to finish things in order for them to be perfect. Going back and nit picking too much can muddy the water, let it be still and learn from what you’ve done. There are so many things that I’ve learned from this book, and now Josh and I can move on and build a stronger and even more beautiful new world! Secretly though, I wish I could have drawn a little bit more awesome things, you only get so much room on these panels haha!

What is next for the both of you?

JHF: Gabo and I have a new book coming up, I think, next year from Oni.

GB: YUP. New book. About some cool things where I get to draw just all sorts of insanely radical things. Once it comes out that will make sense and you’ll completely agree with me. Until then though, I’ll be working on some other things you can keep an eye out for on my Instagram @galvosaur!