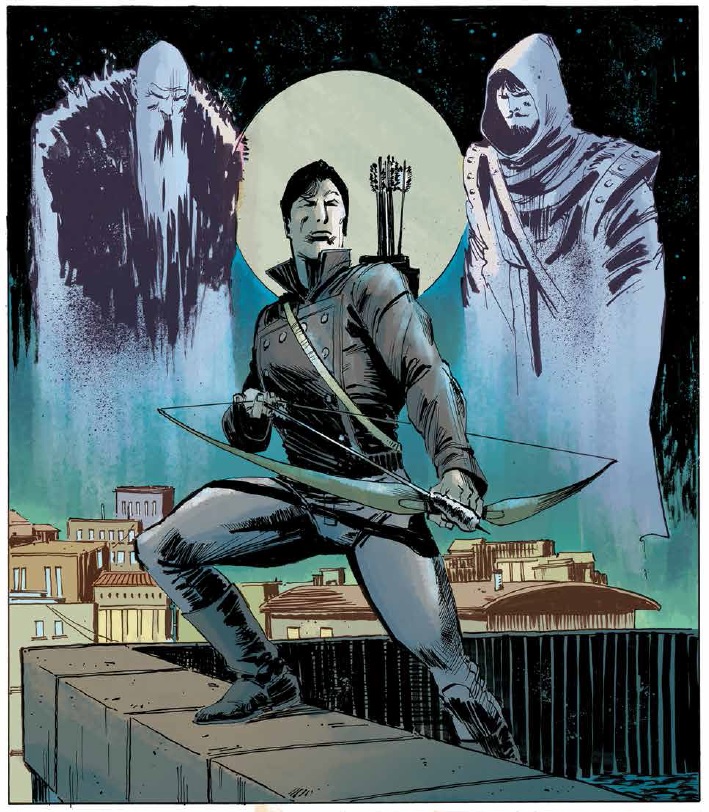 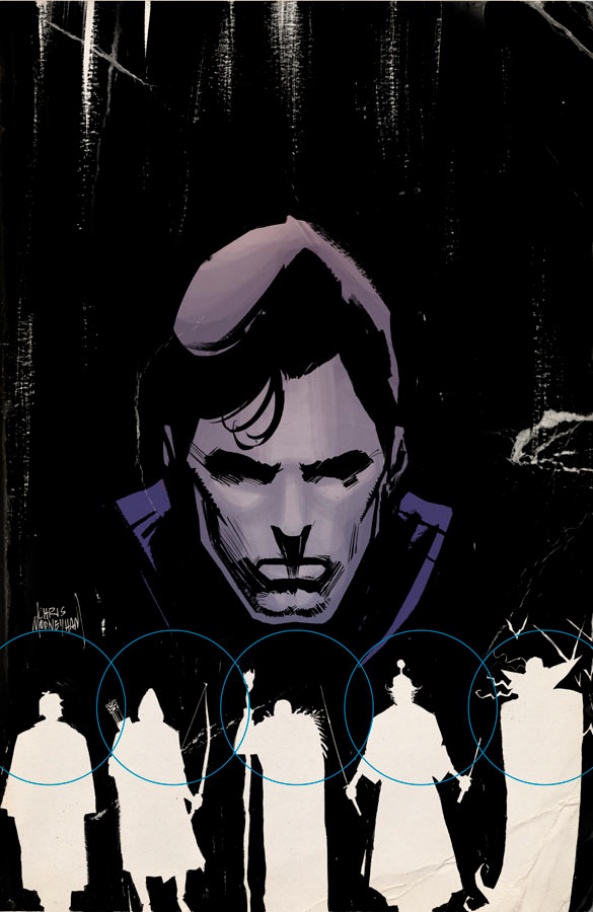 Frank Barbiere is a busy man. Since launching “Five Ghosts” in 2013, he’s written for just about every comic company imaginable, covering various creator-owned concepts and working in some pre-established worlds. Now, he’s embarking on some other adventures, taking his creator-owned comic “Five Ghosts” to another medium with it recently being optioned for TV and another creator-owned comic, “Black Market”, about ordinary people stealing organs from superheroes, debuting at Boom!.

Read on as we chat with Frank about “Five Ghosts” heading to TV, superheroes as the ultimate 1%, working with different publishers, and more.

First, as something that struck me while looking back at your work, “Five Ghosts” started as a Kickstarter in 2012 and launched at Image in March of 2013, and since then you’ve either written or are currently writing for Dark Horse, Dynamite, Boom and Marvel, in addition to keeping Five Ghosts as an ongoing. I know you wrote some comics before, but you went from kickstarting “Five Ghosts” to working for a good portion of the major publishers in just over two years. How does that feel?

Frank Barbiere: It’s a great feeling to know that there’s an audience out there for the work I’m doing. I’ve certainly been working towards this for a long time—starting around seven years ago when I was still in college and during the time I was in grad school and then an English teacher. It was “Five Ghosts” that managed to get the attention of a lot of comics editorial, and as I said—the team and I are just so happy that people enjoy the work as it’s the most honest representation of us out there. But I’m glad to be where I’m at and I’m certainly pushing to grow and get better with each project I work on.

“Five Ghosts” has a TV deal now with Universal, which is huge. How do you think the overwhelming success of shows like The Walking Dead are making it easier for comics outside the DC or Marvel stable to get picked up at major TV networks and get adapted to the small screen?

FB: I think people are always looking. Comics have been big in the Hollywood machine for some time now, and TV suddenly has become an excellent place for serialized genre fiction. Never in a million years did I think “Five Ghosts” stood a chance of getting the TV treatment, but TV is in such an interesting place right now. With shows like Grimm, Constantine, and Sleepy Hollow it really seems very likely that “Five Ghosts” would fit in really well on network…we’re working closely with UCP and writer Evan Daugherty (Snow White and the Huntsman, Divergent, Teenage Mutant Ninja Turtles) and really happy with the take. Things are looking great and the project has everyone excited…if all goes well it could very likely be on TV next summer, so fingers crossed. 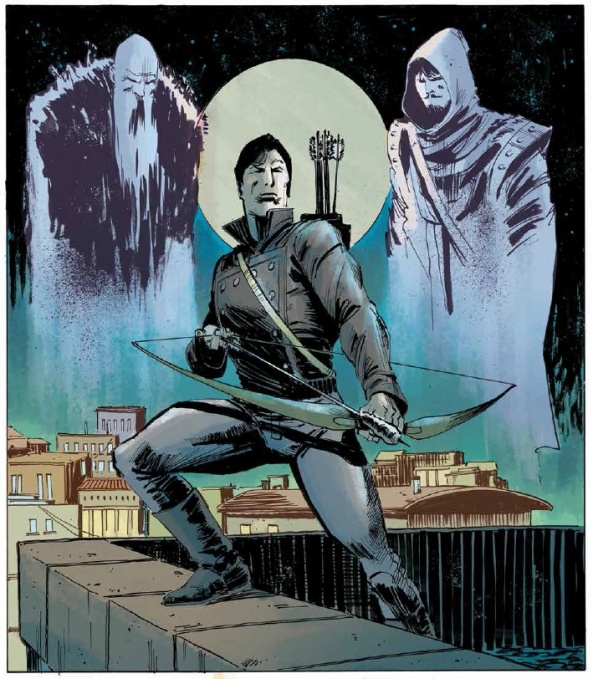 Transmedia appeal is something that gets talked about a lot in comics now that more than ever before are getting optioned for film and TV. Was “Five Ghosts” designed with any transmedia appeal in mind, or were you just trying to make a good story first and foremost?

FB: Absolutely never even considered. Even with the TV stuff happening, I am not a “Hollywood” or “TV” guy. I am here to make comics. I believe in surrounding myself with the most intelligent, excited, and dedicated people when working on any project, hence I’m very happy with where “Five Ghosts” TV is going, but it’s not my world. I would much rather keep my time and energy in making comics then thinking about Hollywood pitches, or backdoor pitches through comics. There is so much in “Five Ghosts” I never thought could translate…it’ll be interesting, but we’re definitely in the right hands.

We are also working with Black Mask Studios on some exciting animation/motion comic-type stuff to supplement the “Five Ghosts” comic as well. This is very exciting to me because it will use the actual art from the book and present it to a whole new audience. “Five Ghosts” is a passion project that the whole team loves…we want to do the comic as long as humanly possible, and all these other avenues allow us to focus more and bring a spotlight to the comic.

Much of your previous creator creator owned work has steered clear of the superhero genre, but your new book “Black Market” delves into superheroes, just in a decidedly different way, as a broken man turns to robbing superheroes of their bodily fluids and organs, presumably, in the name of curing disease. What was it about the black market organ trade and superheroes that clicked in your mind?

FB: It really was waiting for the right story. It’s very difficult to try to launch an original superhero, so for me it was all about finding something specific to say about them. I’m much more fascinated with how people would react in the “real world” to having beings like this flying around and doing amazing things. Honestly, I don’t think people would know what to make of it and it’s been fun to try to paint the superheroes as a bit terrifying. The idea of normal people having to face something extraordinary that they don’t understand works very well for me thematically, and when we spun in the idea of having it be a bit of a crime story things just came into place. I love the idea of the normal man vs. a stronger power that he can’t necessarily beat by brute force alone.

Though “Black Market” isn’t quite so superhero-centric as your recent Dr. Strange annual or your work on “Solar”, how does the approach differ in writing “Black Market”, writing your own world populated by costumed heroes vs. that of one with a significant enough history?

FB: Writing established characters is always a bit easier for me—there’s so much history and characterization you can lean on. With all my creator owned stuff (and even “Solar” as we reinvented so much) there’s a lot you want to cover and introduce the reader to so it’s a constant balancing act of how much you can give before it’s pure exposition. “Black Market” in particular only has four issues to cover a lot of ground, so there was a LOT of thought and planning put into what scenes we see and why. We lean pretty heavily on a lot of popular superhero tropes and mythologies, but it really is a shorthand to get understanding of our universe and what makes it different out there as fast as possible. There are a lot of twists and turns coming, and by the end of the story you’ll be able to go back and read the whole thing in a bit of a new light. 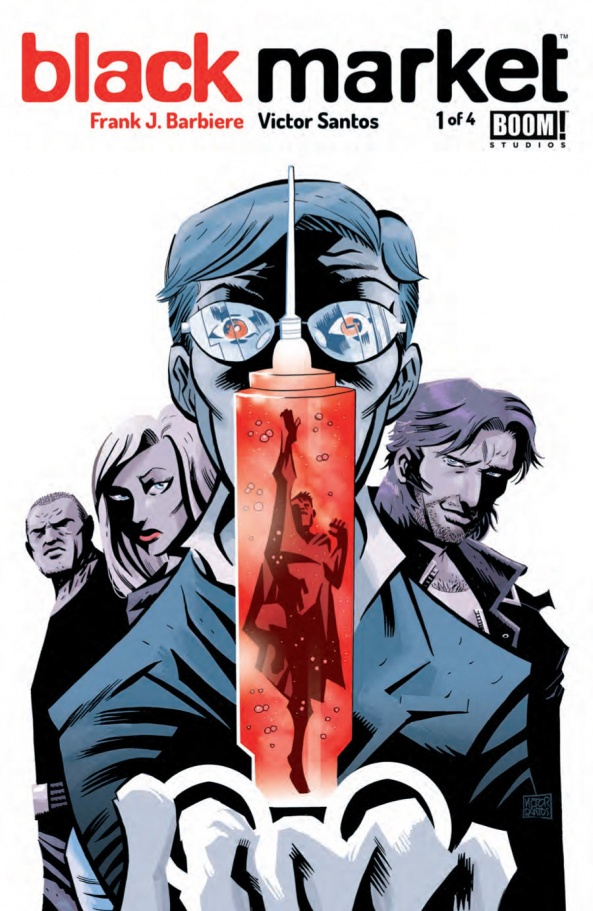 “Black Market”‘s primary protagonist Ray gets talked into this whole “superhuman organ market” deal by his brother Denny. The brothers are very different people and have a troubled history. What aspects of their relationship are going to be explored as they work together, and probably have another falling out?

FB: They really both represent two different views of life—Denny is a criminal who’ll cheat his way to the top, who feels owed by the world for his lower station. Ray has worked hard to overcome the hardships he’s faced, but has had everything robbed from him—he’s got a chip on his shoulder. When they come together to face off against the Supers they really are a metaphor for normal people…for the different ways we process things we can’t control. There are a lot of layers to this story, so I hope people keep reading—everything will change after the 4th issue and you’ll be able to see the whole series, each character’s decisions, in a different light.

Part of “Black Market” almost seems like a caste society or class war. The superheroes were once normal people trying to do good. Now, they’re godlike beings, above the lowly humans in more way than one. Then, you have Ray and Denny, who can’t rise above their humble beginnings even despite multiple efforts. Is that part of the dichotomy you’re going for? Something that almost makes it okay to have these normal humans taking from the supers in order to seemingly benefit humanity?

FB: The idea was to approach superheroes as the “ultimate 1%.” They simply are better, they know it, and it’s up to humans to deal with that. Also the idea of “real superheroes”—I think that would be absolutely terrifying to most people, having people who can shoot lasers out of their eyes suddenly appear. I feel one thing people asked is that “Why don’t the supers just give blood to help humans?” They actually don’t know there is a cure inside them…but I’d also argue that the Supers in our world wouldn’t actually care.

As mentioned above, you’ve worked with quite a few publishers in the last couple years and several of those projects have been creator-owned projects. Not that any one publisher is better than the others, but I know several creators like to keep their personal work at one publisher. What do you see as a benefit to hooking up with different publishers for different projects?

FB: Quite simply, everyone is a little different. I love Image comics and certainly will always feel “home” there, but it’s a very specific place—you have COMPLETE autonomy, which is amazing, but doing books all on my own back, along with my collaborators, can be very draining. I have some more projects I want to bring there, but they’ve been a long time coming—I have to put everything together, find collaborators, and finance the book (until it starts shipping) so it’s certainly a difficult task to undertake. We also don’t plan on stopping “Five Ghosts” anytime soon, especially in light of our TV show in development, so it’s difficult for me to manage multiple properties on that level at the same time.

BOOM! are amazing people who have helped me build “Black Market” from a concept to an actual book. BOOM works closely with creators to develop projects—it’s in no way better or worse than Image, just different. BOOM! approached me to see if I’d be interested in working with them, and then we were off to the races. Dark Horse was a bit different as well, but “White Suits” actually predates “Five Ghosts” —we’ve been developing it for a LONG time.

There is a weird air out there where people want to pit publishers against each other, or wonder why someone doesn’t do all their books in one place. I am not a huge name who can just do any project I want—I have to find someone willing to put their ass on the line, willing to take a chance. I’m very into building my own brand right now, and to try to just do 500 projects at Image isn’t viable. I’m glad I’ve got a lot going on and it helps me to be as prolific as I can.