Suck in that gut, comic fans, because this is G.I. JOEversity: RELOADED, and class is in session!

This week brought us an all new  “G.I. Joe” #1 from IDW Publishing, and writer Fred Van Lente and artist Steve Kurth. The premiere issue sees team honcho Duke pulling together a now very public team of market-tested, government approved Joes, who quickly get thrown into a Cobra hotbed in the American heartland as the world watches from home!

We loved this issue, so we invited new “G.I. Joe” writer Fred Van Lente over to talk about the stars of the book, and to help us put together some fancy, classic-style file cards for the new team. Keep reading, and check out Fred’s commentary on each of the cards below!

Multiversity Comics: Welcome back to JOEversity, Fred! Looking at your Joe team, with the exception of Duke and maybe Roadblock, most of these characters haven’t received a lot of face time in the IDW books before. Duke gives us a great in-story explanation for this particular group, but beyond that, why are these the Joes we should be excited about, Fred?

Fred Van Lente: The challenge I’m trying to undertake is to make them all people you’re excited about. Each one has a distinct personality, a distinct worldview, and has separate reasons for the reader to root for them — all of which we’ll get to here!

Your codename should be “Segue,” Van Lente. So let’s talk about the crew, beginning with General Joseph “G.I. Joe” Colton.

Outside of being destined for stardom on the big screen (G.I. Joe: Retaliation opens March 28th, people!), let’s see what makes Joe the man for the job: 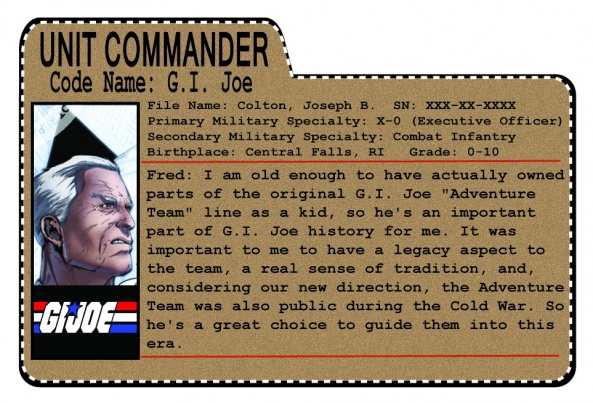 And that brings us to Duke, the Joes’ current field commander. Now, Duke’s been traditionally portrayed as kind of the unit’s boy scout, but we find out in “G.I. Joe” #1 that he’s maybe not as chivalrous as tradition would have us believe. So what’s Duke all about? 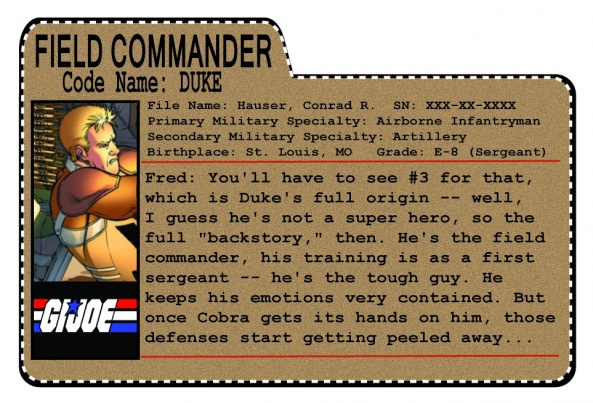 What about Cover Girl? Before, she’s traditionally been a babe in a M50 tank buster, but not here. You identify her as an “infiltration” specialist, but what exactly does she bring to the team? 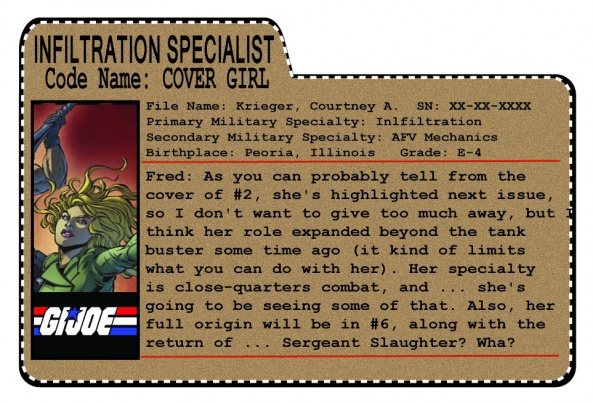 Up next is Roadblock. I might be wrong, but based on his interaction with Quick Kick and Tunnel Rat, I get the feeling that Roadblock’s everyone’s favorite G.I. Joe. Or at the very least, he’s kind of a big brother. What’s his role? I mean, other than being the .50 caliber machine gun guy… 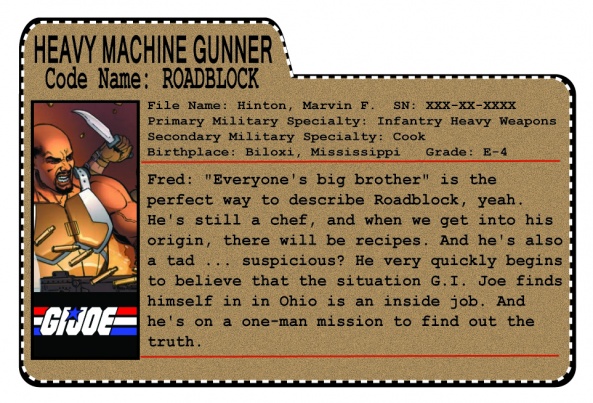 No kidding, Quick Kick and Tunnel Rat are two of my all time favorite Joes! I’m super excited to see these two operating side-by-side, even if the updated costumes confuse me a little bit (sorry, Steve). But I wonder, what can fans like me expect from this sword-wielding Quick Kick and the stripped-down Tunnel Rat? 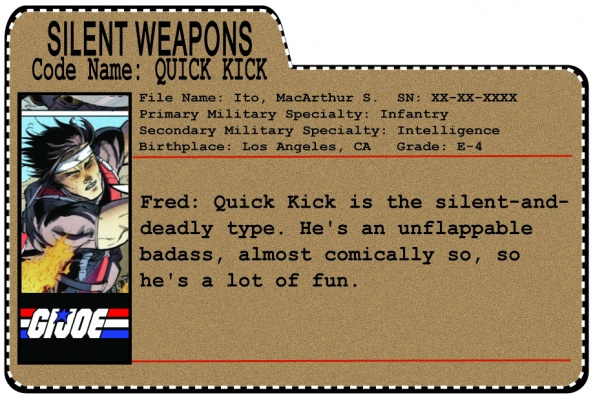 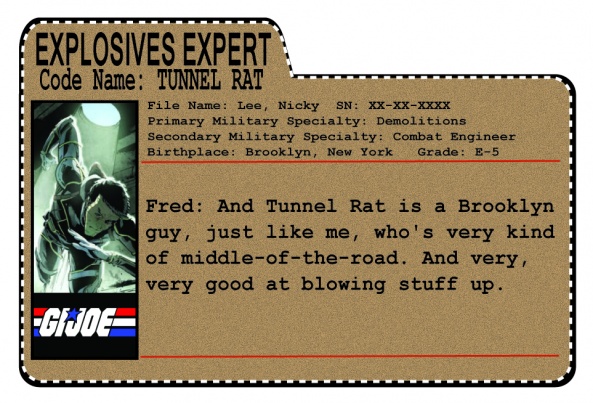 “G.I. Joe” #1 marks the debut of the Joes’ very first “embedded blogger,” Hashtag. And as much fun as it already is having her around… I don’t know, Fred, but it can’t be a good idea to drop a teenager right square in the middle of a combat zone, can it? 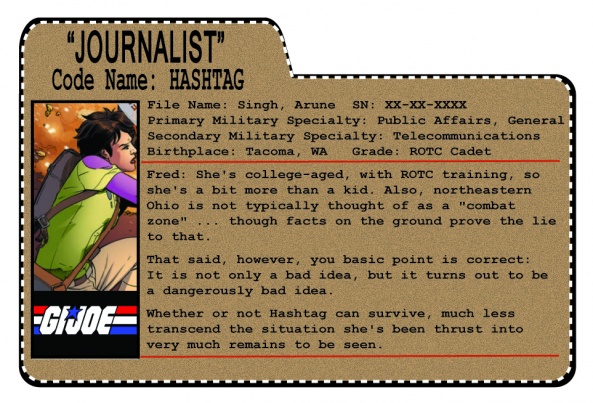 Of course, we also have the official IDW debut of Carla “Doc” Greer, the daughter of the Joe team’s original field medic, Carl “Doc” Greer. What makes Carla different from her dad? And is she the first legacy Joe of the IDWverse? 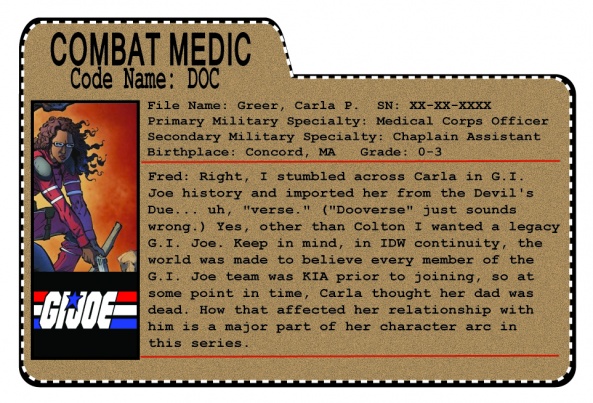 And finally, rounding out the team is Shipwreck. The back and forth between Ship and Duke this issue was perfect, and proved to me you’re going to be just fine on G.I. Joe. Visually, Shipwreck seems like one of the most problematic Joes, and you touch on that right out of the gate. But c’mon, man… how badass is Shipwreck, really? 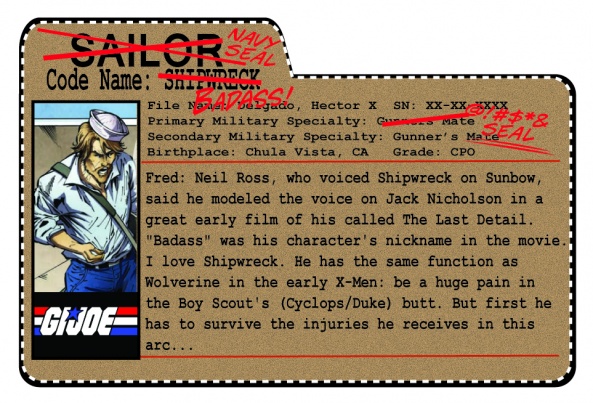 Shipwreck as Wolverine? Not a comparison I was expecting, but I guess I can see it, sure. Thanks for the insight, Fred!

I’m pretty enamored with the debut team in G.I. Joe #1, but I get the feeling they won’t all be making it home. If you’ve read the issue, you know the team’s down one person already, and there’s still four parts left in the story. Yikes!

But be sure and come back tomorrow for my full review of “G.I. Joe” #1, and again next week for a Multiversity New Reader Round Table™ discussion of G.I. Joe, plus an exclusive interview with Chuck Dixon looking back on his G.I. Joe work, and at of what he has in store for “G.I. Joe: Special Missions.”

Until next time, AT EASE, DISEASE!