It is funny how some characters disappear for a long time, but then come back with a vengeance. Eel O’Brian hasn’t been in many DC comics since “Flashpoint,” and then in 2018, he’s in “Dark Nights: Metal,” “The Terrifics,” and now his own miniseries from Gail Simone and Adriana Melo, the first issue of which drops on Wednesday. We spoke to Simone about writing this often silly hero, and what it means for her to be doing this series after years of wanting to write Plastic Man. 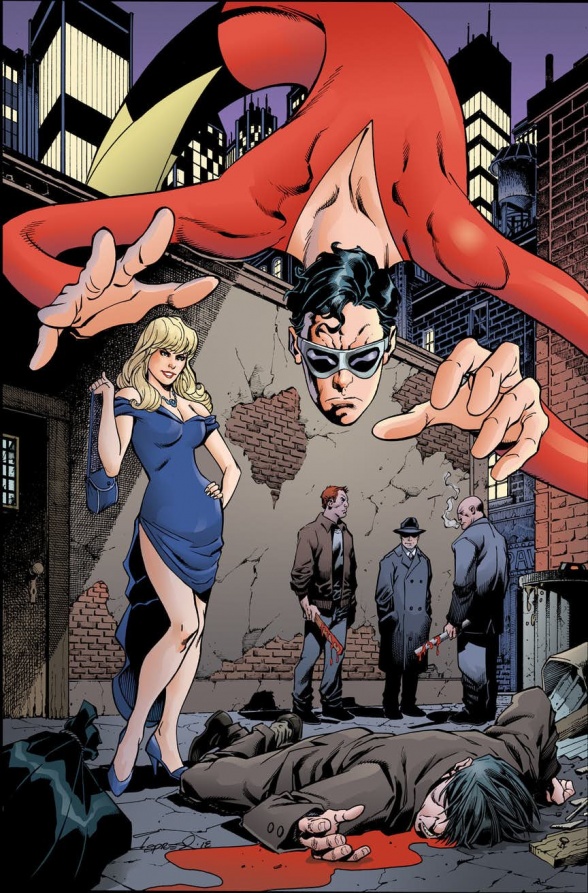 Gail, I know you’ve been talking about/lobbying for a Plas series for years now. What is it about the character that makes him so attractive for you as a writer?

Oh, man, this is a long story. But basically, before Deadpool, before Ambush Bug, before Harley Quinn, before Lobo, Plastic Man was THE funny superhero. I mean, others flirted with whimsy or satire or comedy elements, but no superhero brought the laughing pain like Plas, and I loved that. One of the very first Golden Age stories I ever read was a Plas tale by Jack Cole, and in just a few pages, I was so completely blown away by how dark and mean and good-hearted and FUNNY it all was, even decades later, that I fell in love, basically forever.

When I started in comics, it was on books with a humorous tinge to them, and people started rallying me to do Plastic Man. It feels less like, “what a nice idea,” and more like, “FINALLY!” to me.

Basically, I love the humor, but it wouldn’t work for me without the background of Eel having been a criminal. When that gets removed, I am less involved immediately. I want the superhero whose origin is getting pushed out of a moving car by his own crook buddies after a botched burglary. To me, that’s the key element, everything else is just window dressing.

Eel is a character that is one of the goofier in all of the DCU. How do you try to balance the humor without it becoming grating?

I talk about this often, I have no interest in writing Banana Man, I don’t want a character who is essentially Daffy Duck in a cape, not for a book like this. I liken it to Deadpool, that the humor comes from personal tragedy. It’s easy to write snarky comments, but they don’t really have any WEIGHT to them unless you know why the character chooses to laugh at the world.

Plas feels like he’s a bad guy still, he feels he’s limited, he can’t imagine himself ever being a Justice League dude. In a way, that makes him MORE heroic, because he’s TRYING.

There’s a great deal of emotional content in him, and that’s stuff I love.

Adriana Melo is your partner on this title – tell us a bit about your working relationship, and what’s been the best part thus far?

I had worked with Adriana before, she KILLED it on the “Rose and Thorn” series we did very early on in my career. But I had no idea she had this kind of comedy chops. We all knew she could draw sexy and gritty, we had no idea we’d be laughing our butts off as the pages come in. She’s amazing, I hope this propels her to the superstar status she deserves.

Plas is having a bit of a resurgence right now: your series, appearing in “The Terrifics” – why do you think 2018 was the right time for him to return to the DC spotlight?

I think it’s a pretty well regarded theory that escapism seems to do well in times of economic or political uncertainty. I don’t want to politicize Plastic Man, that’s not the kind of character he is, but I do absolutely believe it’s a great time for characters who can make us feel, make us smile, and make us laugh.

Finally, what’s a shape you were hoping you could write Eel into, but just couldn’t find room for in this series?

This is a true fact about this series. I am known a bit for pushing the edges of what can be allowed in whatever rating of comic I am writing at the moment. I had an entire issue of “Deadpool” with Wade just playing with his junk, for example. But this book is by FAR the book that has been sent to the Standards and Practices, and legal departments at DC and Warners, to make sure we can actually print the stuff on the page. I’m not complaining, they’ve actually been behind us 100% and a delight to work with.

But a LOT of the book has had people going, “Wait, can we actually PRINT this?”

So I am deliriously happy with Plastic Man’s shapes, even the evil ones!