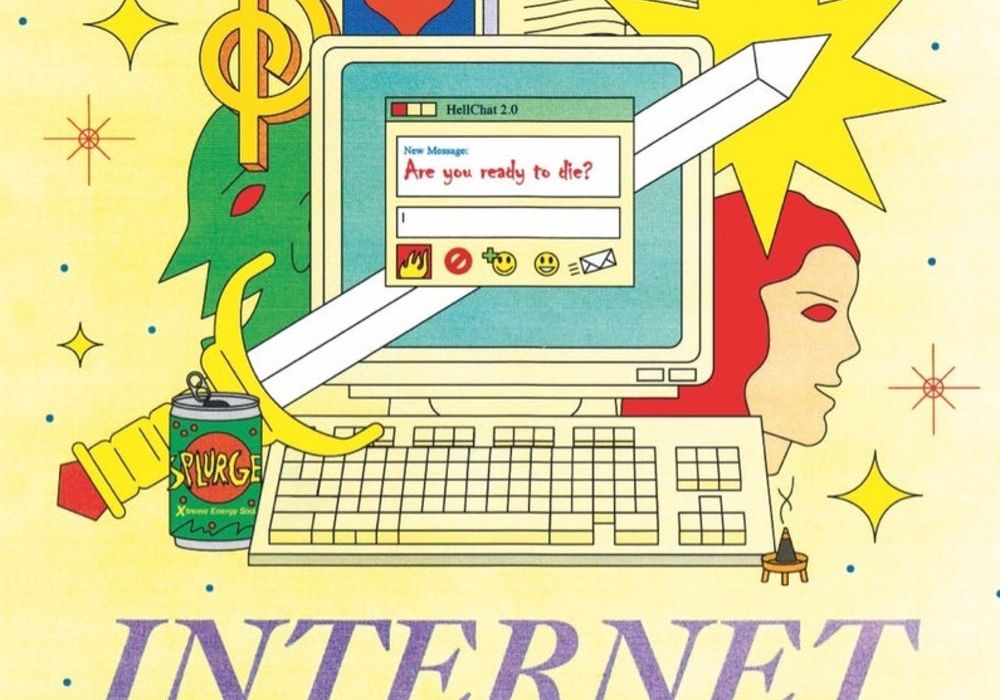 If you’re old enough to remember the early days of the internet, trying to explain the strange and glorious worlds of Geocities, MySpace and AOL chatrooms to the younger generation may make you sound slightly mad. ‘Surfing the web’ (as it were) was such a vastly different experience back then – with a language and subculture all of its own – that you might as well have been from a different planet. It was such a unique but short-lived moment in our online history, the likes of which we’ll never see again: everything was new, we were all learning as we went along, and everything felt far more dangerous and raw than anything that’s come since. It’s perhaps for these reasons that those who do remember those days have such strong and vivid nostalgia.

If that sounds like you – or if you’re someone even vaguely curious about those formative days of ‘the net’- then George Wylesol’s new graphic novel “Internet Crusader” is for you. 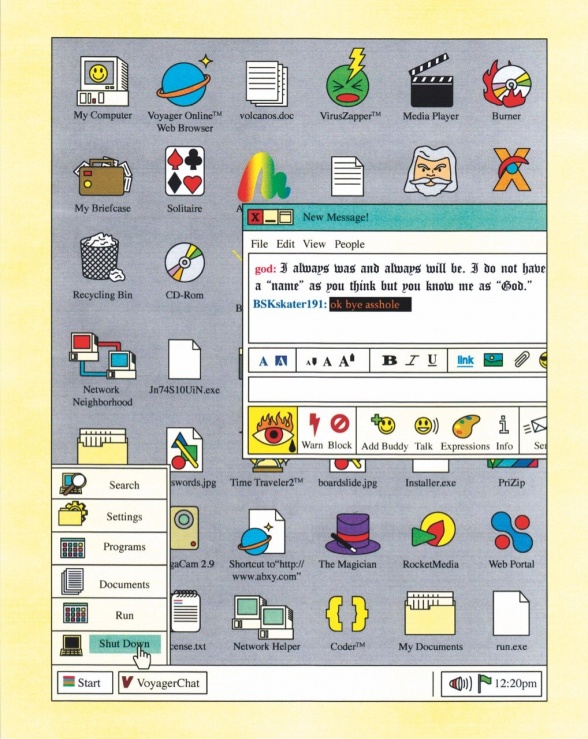 Taking on a first-person structure, “Internet Crusader” is partly an expertly designed graphic novel, and partly an interactive experience that gives you some idea of what it was like on the internet in the late-90s. It’s the story of one young web surfer who goes by the name of BSKskator191 (admit it: your IM handle was equally ridiculous) who’s desire to see illicit images leads him to click on some questionable content, which in turn draws him unwittingly into a battle for the very salvation of the human race. We caught up with George to find out about how this story came to be, what level of research a book like this required, and to find out more about his unique design style.

A word of warning: there are mild spoilers throughout this interview. 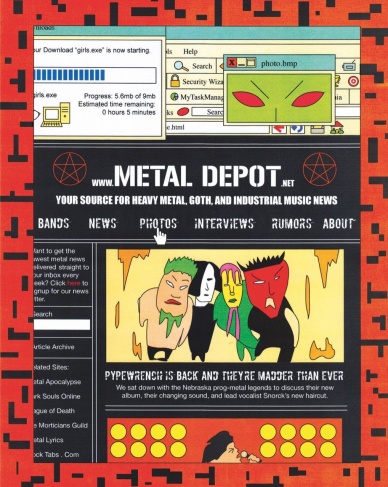 Internet Crusader is wonderfully evocative of a specific era of the early days of the internet. What kind of research went into recreating the look and the feel of those dial-up days?

George Wylesol: I had to do a ton of research for this. The Internet Archive and Wayback Machine were so critical to the final look of this book. I was using the Wayback Machine to look at archived websites from the late 90s, then downloading fonts and making “assets” that would have been used on websites at that time. There’s also a blog called “One Terabyte of Kilobyte Age” that posts screenshots from defunct Geocities websites, so that was really helpful as well. I also downloaded a Windows 98 emulator, so I was using that to get a feel for the UI of the operating system.

I also had to do a lot of research about the writing, like how to write in the different voices on each page. So I turned to the Internet Archive again to see, for example, how the description on a browser game in the late 90s was written, or what kind of spam ads and popups were around at that time. I actually downloaded an archive of spam and browser ads, just so I could get the fake ads in the book to be more accurate.

For the “game,” I was researching (playing) DOS games on the Internet Archive, which was really helpful to get the interface and language right. For the actual plot of the game and the design of the levels, I was looking at things online like ancient Christian demonology. I found some really fascinating books written by monks and prophets from centuries ago, that I used to help inform the names of the characters and levels.

Down to the smallest details – from the chat windows to the choice of music – Internet Crusader is a definite period piece. What inspired you to create a story in that era?

GW: Yeah, I think it’s the only time period a book like this would have worked. It was when the internet was starting to get pretty popular, but everyone on it was still anonymous. I remember feeling even a small sense of danger, that every link could be some potential virus that’d totally brick your computer. And if you were talking to someone online, you never knew who’d be on the other end.

I don’t think the story would have worked earlier; not as many people were online in the early 90s. And it definitely wouldn’t work today, where you basically have to give a DNA sample just to get an email address.

It’s nostalgic for me as well; I would have been about 10-13 during the time period of this book, so it’s very much the internet I grew up with. 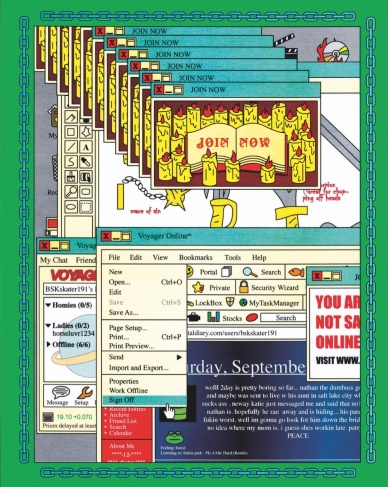 I love your art style, which has such a strikingly unique design. How did you develop this style, and what appeals to you about its storytelling benefits?

GW: Thanks! Yeah, it took a pretty long time to get where I am now visually. I was a classically trained artist using graphite and oil paint for a while. In undergrad, I gradually transitioned into working digitally with Adobe Illustrator. AI lends itself naturally to flat, graphic shapes but can feel too cold and digital. So for the past few years, I’ve been experimenting with different drawing approaches in AI, to help mitigate that coldness and take the program in different directions.

So in this book, there are the windows and text, which look clean and precise and come directly from the AI shape tools. In the game, the drawing, characters, etc. look very loose and wonky, which comes from me drawing in AI with the pencil tool and my laptop’s trackpad and just letting the line stay messy.

The density of the information on the page makes reading Internet Crusader feel less like a linear narrative and more like an interactive experience. Was that your intention going into this project, and if so how do you begin to plot a story in that way?

Yeah, absolutely. I find drawing linear comics to be really tedious and frustrating, and I always lose steam after a while. So the arrangement of these pages was just a way to keep me interested. Each page has a different composition and a different unique element to draw, so I was never drawing anything repetitive.

I wasn’t worried too much about plotting it. I wrote out a rough script first that I could refer to, but didn’t stick too closely. I really like to give myself room to explore the story as I’m going. If I would have stuck to my script, I think the book would have been a lot more predictable.

There’s a larger, apocalyptic story that’s only glimpsed by the reader through the internet activity of the central character. How did you decide what information to reveal and what to only hint at?

GW: That was a little tougher actually. I wanted the reader to know that this was an actual apocalypse event happening in the world, but I didn’t want to “leave the screen” and show the events. So I used a few devices to hint at it (their conversations, the homepage “news”, the scenes that God shows the main character), but never actually showed it.

There were also technical limitations with the internet at that time, like there wasn’t widely-used live streaming video, pages weren’t updated in real-time as they are today, etc. So I had to get a little creative with how to show the outside world.

Finally, for anyone who is curious, how would you describe Internet Crusader, and what about the book would you like people to know?

GW: I think I saw it described as “200 pages of early-internet insanity,” which sums it up pretty well. It was a really fun book to make, a combination of all my interests in one package. I think it’s better to go into it without knowing too much!

GW: Thanks for having me!!!

“Internet Crusader” is out now from Avery Hill Publishing 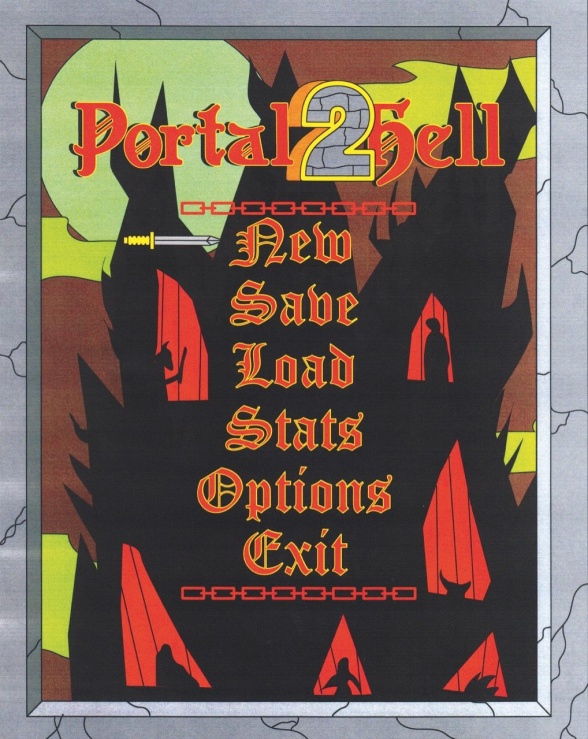