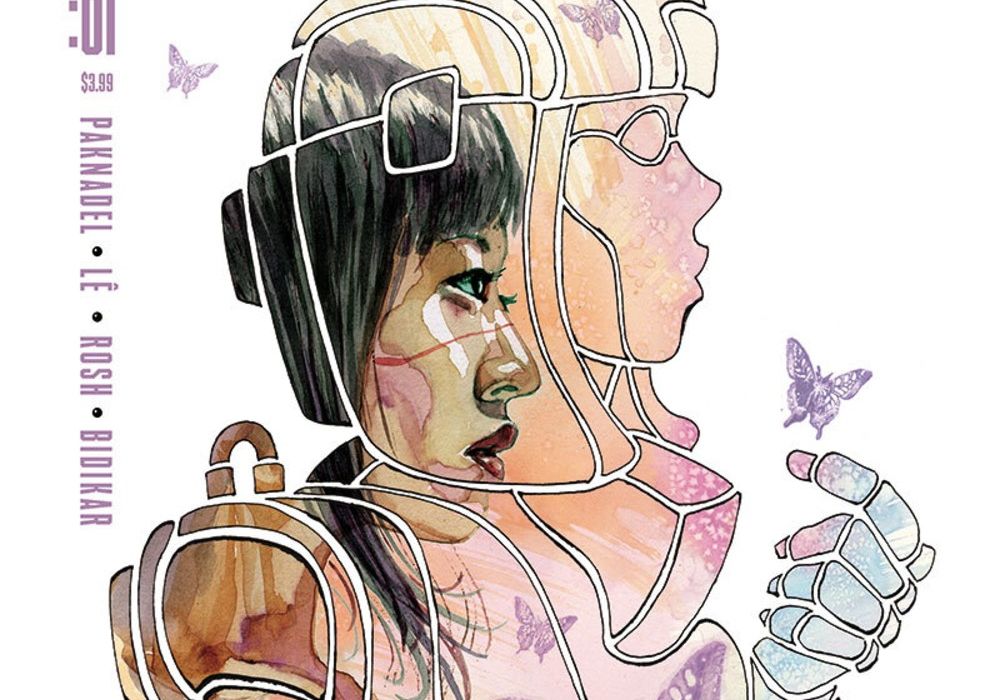 Giant Robots? A sci-fi series with mythic elements but remain grounded? What more could you ask for! An interview with the writer and artist of Vault’s newest series, “Giga,” out October 28th? Well, how can we say no? Thanks to Alex and John for taking the time to answer our questions.

The world of “Giga” is brimming and bristling with mystery and places to expand. The first issue could have easily been all world building but instead you chose to leave the details to the art and to the audience. What went into deciding what to hold back on and why start farther into what would be the traditional start of a story like this?

Alex Paknadel: First of all, thanks for the kind words. Early reactions to the book have been very positive, which is great to see. As to the choices we made with the book, Kurt Vonnegut used to advise aspiring writers to “start as close to the end as possible”, so that’s generally what I try to do with my stuff. I love nuanced worldbuilding, but I’m a writer and not a mapmaker. If I’m not populating a believable setting with believable characters then I’m leaving the job half-done. There were early discussions about text infodumps on the first page because I was nervous about withholding too much, but our editor Adrian Wassel convinced me that there’s more than enough exposition in the first issue to orient the reader. I wanted this book to be smart, but I never wanted it to be inaccessible or intimidating. We’ve made it as new reader-friendly as humanly possible, but there’s plenty of mystery to sink your teeth into.

A theme being set up at the start is a conflict between dogmatic obedience and inquisitiveness. It’s an old idea, yet we continue to return to it in various media over and over. What about this tension that remains so powerful? Or is it simply a reflection of today?

AP: Honestly, I think it’s both. We’ve hit a cultural moment where there’s real animus between those who prefer to remain rigid and incurious about other people and the world, and there are those who are prepared to meet the other on their own terms and explore a little bit more. Ultimately, the latter tendency will always win out because if it didn’t then we’d still be daubing cave walls with our own poop to this day; however, that doesn’t mean progress and human advancement run smoothly or without violent challenge. In Evan and Aiko, we have two smart people whose curiosity about the metal gods whose wills they are never meant to question has landed them in very hot water, but they knew the risks and that’s why I think of them as heroes. Galileo knew the risks too. So did Giordano Bruno.

John Lê: For me, it’s definitely both. It’s a theme that is heavily relatable to all different types of people – a struggle that transcends through time. It’s that shape-shifting struggle that we know all too well, which allows us to implement ourselves into the narrative, and in turn, allowing the readers to find themselves within the same narrative. For me, that’s the magic of storytelling as a whole, a continuous flow and exchange of energy – a conversation in spirit.

On that, would you say a central question of this book is “What is the meaning of life?” And if so, what are your thoughts on that? Let’s go full galaxy brain.

AP: The meaning of life is tacos, so let’s move on.

What’s a typical page process look like, from script to art to color to letters to final, gorgeous piece?

AP: It’s more circuitous than most because I’m a hideous control freak. I write full script, then it goes to John who comes back to me with successive drafts until I ask him to move a chair an inch to the left about three days before we’re due to go to print. John then hands the pages over to our colorist Rosh, the mad genius who sources the book’s textures from nature. The colored pages then go off to the great Aditya Bidikar, who letters the whole issue and then burns me in effigy while he waits for me to change every line at the eleventh hour.

I’m only half-joking here, by the way.

JL: He is only half-joking. From the visual end, I receive a full script from Alex, take a real big deep breath, and start drafting. I go through the same conventional steps as most artists with thumbnails, pencils, to inks. However, the special thing about this book has been that all of the most important decision making moments have, at one point or another, come from each and everyone of us throughout the process of each issue – from all of the creators, to editorial, as well as our designer. There’s fingerprints from all of us on each issue.

What giant robot series, singular or plural, most inspired “Giga” and, if different, what’s one you love and want everyone to experience?

AP: “Giga” was actually most inspired by the “Les Cites Obscure” series by Benoit Peeters and Francois Schuiten. The idea of rendering fantastical architecture mundane is something I kept coming back to, and while those gentlemen tend to focus on metaphorical approaches to postwar European urbanism, I found myself drawn instead to questions of religion and immanence. The Abrahamic tradition posits God as this remote essential condition of existence, but what if you could reach out and touch your god – live inside it, even? How could religion maintain its power and approximate that essential distance – that interpretive space inhabited by demagogues – in a world where gods are as real as aircraft carriers?

In terms of mechs, I think you probably need to see a doctor if you’re not obsessed with Neon Genesis Evangelion, right? It’s probably illegal.

JL: Like many, I grew up on Neon Genesis Evangelion – it was my first introduction to giant robots that really, really hooked me. However, I don’t think it’s possible for me to pin it down to just one or a few inspirations for the visual aesthetic of GIGA. This book continues to allow me to pick and harvest inspiration from very different moments of my life – almost eerily so. It’s a treat to live in this world.

I noticed writer Danny Lore was credited as a sensitivity reader at the start of issue #1. Did you approach them about the project specifically or did it come about another way?

AP: I mentioned engaging a sensitivity reader to Adrian Wassel because although representation is important and non-negotiable in 2020, there are several experiences in the book – race and disability, principally – that I have no authority to inhabit. Danny’s been a good friend for many years, so at my request they went through the script with a fine-tooth comb and pointed out some areas where I’d tripped up or overstepped my bounds so I could course-correct and make the book as welcoming as possible.

I know this is new for a lot of people, but I can’t recommend the process highly enough if, like me, you don’t belong to a marginalized group. For me, it’s firstly about learning where your innate biases lurk so you can get some sunlight in there and hopefully grow a little bit as a result. Secondly – and I know this is very meat and potatoes, but it’s what I genuinely think – it’s about removing obstacles to the work. We all want our work to pass or fail on its own merits, but if I unwittingly traffic in cultural stereotypes and ableist tropes – and God, I hope I don’t but we’re human and we err – then those are big barriers to entry for a lot of people who might otherwise experience a connection to my story.

Do you think, or hope, in the future this will become a vital creative team credit right alongside, say, colorist, writer, letterer, artist, etc for books that require it?

AP: For books that require it, yes. It’s a more forensic layer of editorial and I think it should be credited as such. Of course I hope that culture becomes more organically attuned to where the boundaries lie over time because a future we can all share and enjoy literally depends on it, but right now there’s a lot of work to be done – not least by people like me. A second pair of eyes to make sure your intentions aren’t eclipsed by clumsy and obstructive cultural baggage is a reasonable and necessary thing if you think about it for ten seconds.

And, to close us out, is “Giga” a long-term plan kind of story or a smaller, single arc mini?

AP: I have a big, sprawling universe to explore here, so if it sells well then you can expect to see it expand in lots of exciting directions. For now, this is a self-contained story with a beginning, middle and end but we definitely leave it in a place where we can immediately act on the nod to continue if it we get it.

For now, I just really hope people dig what we’ve made here. We poured our hearts into it and I think it’s really special.