Welcome to the Harrow County Observer, Multiversity Comics’ dedicated “Harrow County” column. Regular readers will know the latest arc, ‘Done Come Back,’ is also the final arc for the series, so we’re going to do something a little different. Instead of talking about the arc after it’s finished, we’re going to switch to a monthly format, discussing each issue as it comes out. This month both writer Cullen Bunn and artist Tyler Crook were able to join us to discuss “Harrow County” #29. Obviously, spoilers ahead if you haven’t read it yet! 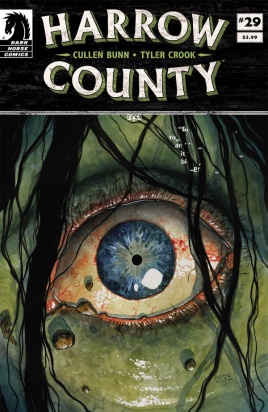 The last time we spoke, we discussed a lot of the killing you’ve been doing lately (Emmy’s Pa, Kammi, the Skinless Boy), and while “Harrow County” #29 certainly kills a few more characters, I thought we could instead discuss how you lay characters to rest. After all, when Emmy’s Pa died you took great care to handle what happened next, to give Emmy that moment to lay him to rest. In #29, the Skinless Boy is laid to rest in a hauntingly beautiful sequence.

Cullen Bunn: Yeah, I feel it’s important to say goodbye to these characters in a way that lets you know they aren’t coming back. This isn’t a superhero death. These are characters that we love, and they’re gone, so with deaths like Pa and the Skinless Boy, I wanted to do something that spoke to who they were while they were alive. There’s another sequence coming in issue #31 that looks back at many of the characters (good and bad) from the series and says farewell to them.

True. It seems even Kammi isn’t quite done with yet. Yes, she’s technically dead, but that face staring out of the river, grinning maniacally didn’t look like Emmy, that’s for sure. 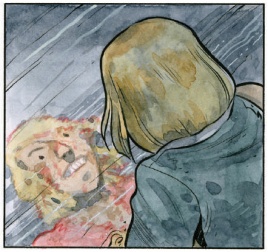 Cullen: It’s true. Kammi is dead, but part of her lives on. Now that Emmy has devoured some of Kammi’s flesh, she has also taken on a piece of her soul.

Tyler: That’s the thing about these magical beings eating each other like that. At some point “you are what you eat.” It’s still unclear how that all works and how much of another person they are actually consuming. Is it just their power or is it their personality too?

It was painful to see Emmy so desperate to be clean after eating Kammi, knowing there is no way this is going to wash off. The way Kammi sticks with her and seemingly becomes a part of her mind had me wondering about the rest of The Family. What did Hester go through after she ate Amaryllis? What did Malachi go through after eating so many of his creations?

Cullen: That’s a terrific question. I’d like to say we’re going to explore that, but it’s probably a question best left to the imaginations of the readers. Maybe taking on the soul of another being is a maddening experience. Maybe it can drive someone over the edge. Of course, they have to be a little unhinged (yes—even dear Emmy) to do something like that in the first place.

Tyler: They should all write Yelp reviews. “I thought the Amaryllis was fine, but a bit salty.”

I have to tip my hat to you both. You took the portraits with scratched-out faces from ‘Family Tree’ and made them even creepier. Holy crap!

Cullen: I hand that all to Tyler. I had the idea to return to the portraits, but I think Tyler just took that in such an eerie, disturbing direction.

Tyler: The secret is that you can always add more blood.

Cullen, you recently spoke to the Sirens of Scream about “Harrow County.” One of the things you mentioned was that you wished there had been more time with Kammi back in ‘Twice Told’ before she was dragged underground by Hester. I can’t help but wonder if we’d ever see a story with Kammi and her butler (or butlers) in the city. Do you think there’s more to tell there? 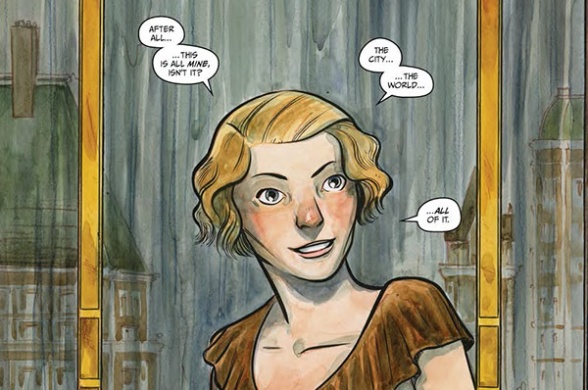 Cullen: There’s more to tell for sure. And I think that story will come out in one fashion or another. As for how, I’ll keep my ideas on that to myself.

I’m hoping for a miniseries or OGN myself.

Tyler: That would be rad.

In #29 Hester had herself a bit of a Family Feast. Given that all the way back in the very first issue of “Harrow County” you were always emphasizing Hester’s mouth, I feel like this (or something like this) was something you had in mind from a very early stage of development.

Tyler: Ha. I wish we were that thoughtful. With Hester, I always wanted her to feel mysterious and inscrutable—like a force of nature. So one of the things I’ve tried to do is keep her face obscured as much as I can. It makes her feel less human I think. I guess we just saw her mouth a lot because I had to show something.

Cullen: Yeah, I think the idea of these beings devouring the flesh of one another came about a little later in the development of the series. Maybe Tyler’s depiction of Hester planted that seed?

Tyler, you not only wrote, but also drew this issue’s “Tales of Harrow County” back-up comic. You even illustrated Ma’at Crook’s “Church Camp, Broken Pinky-Toe, and Floating Coffins.” How on earth do you find the time with the finale breathing down your neck?

Tyler: Oh jeez. That was because we almost forgot to put a “Tales of Harrow County” in this issue. It’s one of those things where we are all working so hard and so fast to get these issues done sometimes we miss stuff. At the very last minute I remembered that we didn’t have one lined up and I couldn’t bring myself to ask another artist to pull an all nighter so I just did it myself.

Cullen: Tyler’s absolutely committed… or should be committed! I feel like this is a good place to remind folks that not only does Tyler illustrate and paint and write—he’s also a composer! He has composed soundtracks to Harrow County you can find on Bandcamp! I frequently use the soundtrack as background music! 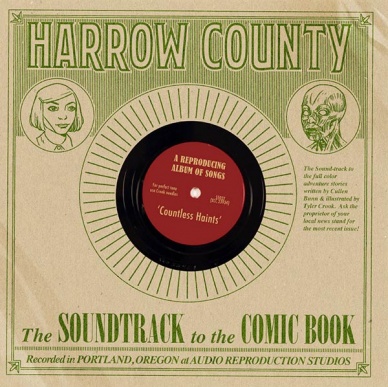 Tyler: I also letter the dang book. No big deal. But if folks want to listen to the original score for Harrow County they can stream or download the Harrow County Soundtrack on Bandcamp for free. 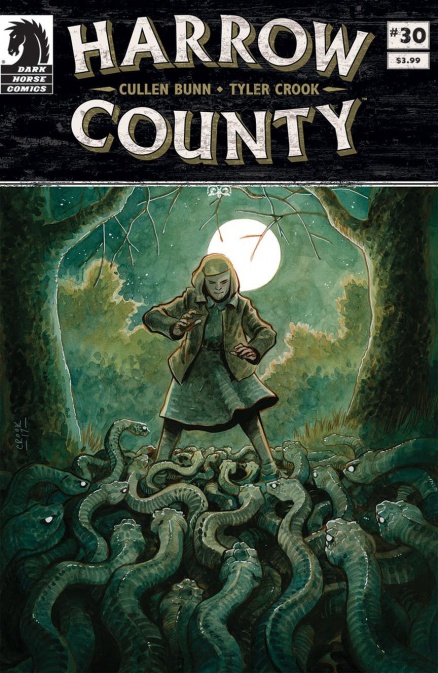 The evil witch has returned with more power than ever, intent on consuming Emmy and her magic in this final arc to the hit series!

“Harrow County” – Which Format Is Right for You?

Welcome to the Harrow County Observer, Multiversity Comics’ dedicated “Harrow County” column. Lately, Dark Horse has been shining a light on its back catalogue, focusing on a different series each week with digital sales, free first issues, and doing interviews with creators on their Twitch channel. Last week, their focus was “Harrow County,” and they […]

Welcome to the Harrow County Observer, Multiversity Comics’ dedicated “Harrow County” column. That’s right, we’re back! “But,” I hear you say, “didn’t “Harrow County” end in 2018?” Yes, it did, however there are still more stories to tell in this world, so in this latest installment we’ll be talking about something new coming in December […]