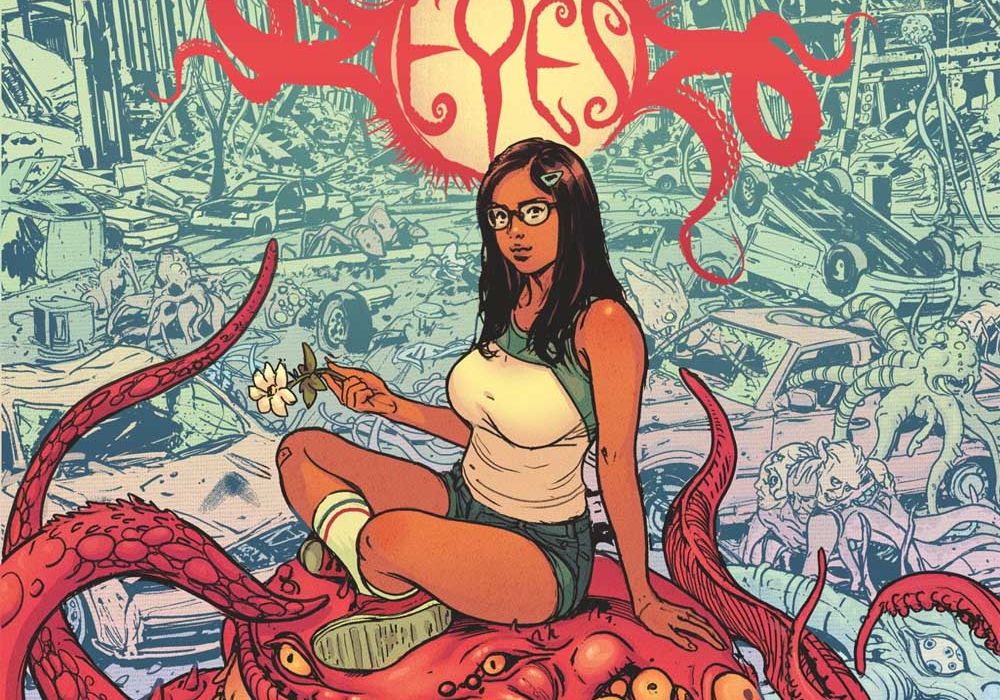 When people think about Lovecraft they often thing about horrifying creatures, cosmic horror and fear of the unknown, the unexplainable and mans place in it all. What may not come to mind for Lovecraft is romance or young love. However it should be noted you can’t spell Lovecraft without love and you can’t have a “twisted tale full of Lovecraftian horror, blissful romance” without Vault Comics new series “Heart Eyes.”

“Heart Eyes” is a new series from the creative team of writer Dennis Hopeless, artist Victor Ibáñez, colorist Addison Duke, letterer Simon Bowland and designer Tim Daniel. “Sanity-eating monsters ended humanity. The unlucky few who survived now hide in the cracks of a broken world. And yet somehow, beneath the graveyard that used to be San Antonio, Rico met Lupe, the girl of his dreams. But how did she get here? And why is she smiling? No one survives out in the street. No one smiles where the monsters lurk. . .”

To learn more about this new series, what are sanity eating monsters, and what is going on with Lupe we were able to speak to series writer and co-creator Dennis Hopeless. You can find out interview with Dennis below as well as some preview pages for the series. A huge thanks to Dennis for taking the time to answer our questions. You can  find out more about Lupe and “Heart Eyes” when the first issues hits store and online this July 27th.

How do you write a story about a world ending event during a world wide pandemic? Were you able to bring some of your own experiences into the series?
Dennis Hopeless: I suspect we’ll be seeing a lot of introspective apocalypse stories coming out of the pandemic. That was never our plan. We weren’t intentionally writing a story about the lockdown, the series was actually inspired by a drawing of Lupe and a cute monster Victor put up on Facebook, but it was the Summer of 2020 when we started brainstorming and all of that raw emotion snuck in. Victor loves cosmic horror so most of the Lovecraft in the book comes from him. My contribution is star crossed lovers… desperation, loneliness and creeping mental illness.

In the previews we see the very start of the monster’s attack then a cut to the current day. Will the series explore the history of the world and lore surrounding the monsters?
DH: Yes absolutely. The bulk of the story takes place years after the fall of civilization but we flashback over the course of the series and flesh things out. By the end you’ll have a pretty good picture of what happened, both to the world and to our characters. Surviving what they survived didn’t happen by accident. There’s a reason these people made it.

A heavy focus of the previews has been on Lupe and the mystery behind her. What can you tell readers about who is lupe is? She is quite a character in this first issue, how do you capture her unique perspective when writing her personality and dialog?
DH: Lupe is THE big mystery of the book. She’s a super complicated character and the beating heart of the series. She’s also sort of… adorably terrifying in her way. As one of the other characters mentions in issue #1, nothing about Lupe makes sense. If she is what she appears to be, she shouldn’t be alive, so what the hell is she?

Fortunately, I know all the answers already so writing Lupe is a lot of fun. She marches to the beat of a very specific drum and that informs everything she says and does. Her innocence isn’t an act… But there’s a reason she’s a little scary.

You have talked previously about seeing a drawing of Victor’s that sort of kick started the idea of “Heart Eyes” for you. Has that ever happened before, working back from an artists drawing? As you continued into the series with Victor has his art/style informed a lot of the series?
DH: I’m not sure if I’ve ever based an entire series off of a drawing before… But Victor and I crafted the beats of the story together over the course of several months so it’s not really as simple as it sounds. The book is very much both of us, soup to nuts. I’m just lucky Victor likes working with me and let me help bring Lupe and her weird world to life.

One thing I have always done is allow the art and character designs to inform and change the story. Salvador Larocca’s robot arm design for “Cable & X-Force” altered how I thought about that team and inspired the rivalry between Forge and Dr. Nemesis. Kev Walker’s Braddock Academy character designs totally uprooted what I was planning for Avengers Arena in the best way possible. He brought those kids to life and I just let them roam. And I stopped writing dialogue over Javier Rodriguez’s action scenes in Spider-Woman because only a fool would get in his way. Comics is collaboration and thank God for that. Artists have been making me look good for YEARS.

You have worked with Victor on previous series, what can you tell us about his work that you have been seeing on “Heart Eyes?”
DH: I can tell you that it’s absolutely brilliant and stunning beyond words. Victor and our amazing colorist Addison Duke are going to blow eyeballs out with this book. They impress me more with every single page. It’s hard for me not to share everything immediately.

It’s been a joy working with Victor again. His pages have so much dimension and weight to them. He’s meticulous about reference and perspective so his backgrounds are just perfect. But Victor’s greatest gift is acting. The nuance he brings to every facial expression, it’s a character writer’s dream. And then his monsters, good GOD the friggin’ monsters.

You have done a lot of work with the big two in comics. What has your time working with in those systems helped you bring to your work in the creator owned realm or just as a writer in general?
DH: Creator-owned is a totally different animal because you’re building a world from the ground up. You’re creating every character from scratch and you have to establish all of them within the story. Unlike the big 2 where you’re standing on the shoulders of giants and have the benefit of decades of continuity. I’ll never have to make people care about Spider-Man.

The series has been pitched as a romance Lovecraftian horror mash up? What makes a good Lovecraft horror and what makes a good romance and how have you brought those two together?
DH: Cosmic horror is scary in the way that the vastness of space is scary. Otherworldly creatures so strange and terrible, our tiny human minds crack on sight. It’s the terror that gets you, the insanity, and I just love that. Feels a lot more realistic. Fear is the monster.

Great love stories play with the same ideas in a different way. Love will drive you crazy faster than anything. It’s a beautiful insanity that plays on our biggest fears of loneliness and longing. The monsters in “Heart Eyes” are drawn to fear and feast on sanity. It’s a love story, just with crazy high stakes. Romeo and Juliet after the monster apocalypse.

With a title like “Heart Eyes” what puns or world play do you expect to see with reviewers when then review the book?
DH: My last name is Hopeless so when it comes to reviewer puns, I plan for the worst and hope for the best. But we did name the book after an emoji, so I suppose we deserve whatever we get.

Last question, “Avengers Arena,” people don’t appreciate that enough right? It was amazing, we should all talk about it more right?
DH: Unquestionably brilliant. Haha. One of my sons is named after Cullen Bloodstone and he cosplayed as his namesake at our hometown Planet Comicon this year.

“Avengers Arena” was my very first ongoing and my first taste of “passionate” comic fans vocally hating my guts. Writing it taught me how to hit deadlines and literally put me in therapy… But it was the mainstream comics trial by fire that made me the writer I am today. Some people will always curse my name because of that series (and the beloved characters we killed in it) but it also has some of my most vocal fans. I’ll always be intensely proud of the story Kev Walker and I told there, back when I only sort of knew what I was doing. It has a special place in my heart.