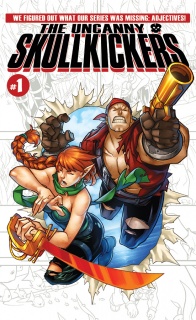 After a bit of a break, “Skullkickers” comes back this week with a brand new adjective. We sat down — figuratively speaking — with Jim Zub to talk about what is to come next for comics’ favorite cranium punters. Whatever it is, I’m sure it will be super serious and not at all violent, like usual.

This cavalcade of new “Skullkickers” #1s is, and maybe I’m going out on a limb here, a bit of a jab at both DC and Marvel’s recent line-wide relaunches. As a number-crunching hobbyist, do you think new volumes play a different role in the realm of creator-owned comics, or is the fundamental premise, aside from creative shifts, the same?

Jim Zub: It’s an unfortunate reality that long consistent runs on a title don’t generate the same kind of press buzz that launches and changes do. It’s understandable that changing/launching/relaunching grabs headlines, but it also means that solid creative teams making a long term mark on a series aren’t seen as a priority. The “Skullkickers” Relaunch-o-rama is sarcastic hucksterism to bring attention back to our series. I don’t know if it would work with other series, but so far it’s been a nice boost for us. The tongue-in-cheek nature of “Skullkickers” lends itself to this kind of thing.

I suppose the simple question is: why now? Did the New 52 and Marvel NOW! simply give the right opportunity to crack a good joke in an otherwise overtly serious book, or was this arc always viewed as the start of “Skullkickers” Season Two even before it got the new adjectives?

JZ: It’s the start of the second half of our big story and I felt like it was a good time to beat the drum and draw attention to the latest arc, the 3 volumes we have already completed and issues yet to come. The fact that both DC and Marvel had relaunch promotions running for the past year and half made it a natural thing for us to jump on the coattails of as well.

While the majority of readers will most likely either be fans since the first arc or will at least start with Uncanny, odds are likely someone will see Edwin’s excellent cover for, say, “Savage Skullkickers,” notice the shiny new #1, and pick it up on a whim. Obviously, this is a good thing, but how do you balance making every issue accessible to new readers with keeping long-time readers engaged while telling a serialized story?

JZ: “Skullkickers” as a concept is straight forward and easy to pick up on even mid-arc but, to make it even easier, we have free online serialization of earlier issues and a recap at the start of each arc to bring new readers up to speed. That way we don’t simplify things and annoy long time fans and we also can bring new readers in at practically any point.

Will fans get the chance to choose one of these adjectives as the “official” new “Skullkickers” title, or will we be going back to the adjective-less title and standard numbering at the conclusion? I admit, I only ask because I personally love the sound of “Savage Skullkickers.”

JZ: You’ll have to wait and see what the new Previews solicits bring. I don’t want to tip my hand too much just yet on that. 🙂

With the third arc, ‘Six Shooter on the Seven Seas,’ a good dose of genre-bending was introduced to the “Skullkickers” setting. Will we be seeing fantasy’s flexibility as a genre continue to play an important role in the plot of “Skullkickers,” beyond Rex’s “secret origin?”

JZ: Each arc has its own theme and our latest is built on jungle savagery and exploration, which I think is a fun backdrop for fantasy hi-jinks. As we continue forward we’ll have other sword & sorcery-esque locales and threats to keep the Skullkickers very busy. It’s a quest that drags these idiots far and wide.

The new arc, ‘Eighty Eyes on an Evil Island,’ is a jungle island adventure wherein Rex and Kusia will have to use their wits to survive — needless to say, a slightly different environment than we have seen the cast in before. Have any books, movies, or even games been strong influences in shaping this kind of environment and plotting this kind of adventure?

JZ: As always, D&D is the beating bloody heart of “Skullkickers.” There were lots of classic modules like the “Isle of Dread” and “Isle of the Ape” that wormed their way into my brain when I was young and I’m drawing upon those for inspiration. There’s a bit of Indiana Jones, Tarzan and Where the Wild Things Are in there too.

Over the past few months, you have been doing a sequence of “how to” articles on your website about making comics, and the first and only issue of “Uncanny Skullkickers” includes in its back-matter portions of the issue’s script. What role do you feel comic writers have in cultivating new writers? Does this role shift as the mentoring writer becomes more and more established?

JZ: I’m an art and animation prof at Seneca College in Toronto, so teaching comes naturally to me. I use the tutorial posts as a way to answer questions I get about the business and also to organize my own thoughts on process, marketing or the economics of creator-owned comics. It allows me to cohesively look at what I know and what I still need to learn as well.

As readers get more access to creators and the barriers to entry for publishing are adjusted by digital distribution and webcomics I think it’s extra important to share knowledge and be communicative. Open source creativity and sharing is changing everything and I’m happy to be a tiny part of it and that people are finding the tutorials helpful.

JZ: The whole team has gelled really nicely. I write less than I used to in the scripts because Edwin now has a really good feel for what I like and I’m confident that he’s going to deliver on the potential of each scene. It’s pretty rare now that I even have to ask for art changes. Misty has the mood locked down cold and Edwin’s work keeps growing with each issue. It’s exciting and gratifying to be part of such a smooth-running creative team. I’m hoping that after “Skullkickers” wraps up down the road we’re able to work together on other projects, commercial or creator-owned, because it’s a great collaboration.

How tightly secured are your plot “benchmarks” for this series? Is “Skullkickers” already plotted out issue by issue, or are you stretching it out as far as you can before winding it down? If the former, where exactly is “Uncanny Skullkickers” on the story’s timeline?

JZ: I know the overall story right to the end and, while there have been minor adjustments and additions, we’re on target for the story I’ve wanted to tell since I expanded out from the original 5 issues mini-series that was our first arc. Once I knew we were making “Skullkickers” an ongoing series I put together the six arc structure we’re still following through on. It feels good to have a plan and be able to carry it through while making improvements along the way.

To wrap things up with a traditional Multiversity question, what sort of music, if any, do you listen to while writing? Does it vary depending on the project you’re working on?

JZ: I generally don’t listen to any inspirational music or background anything while I right. Silence is best and keeps me on task. If there has to be music running to drown out other distractions then I’ll use something simple and orchestral so the lyrics don’t confuse my brain as I’m juggling words around.

“Uncanny Skullkickers” hits shelves this Wednesday, and begins a string of relaunches that puts DC and Marvel to shame. If you haven’t been reading “Skullkickers” yet, you can read the first few issues for free at Keenspot.