Brian Hurtt (“The Damned,” “The Sixth Gun”), Marie Enger (“Nosferatu,” Casket Land), and Matt Kindt (“Mind MGMT,” “Dept. H”) are the three creators behind HEK Studio (Hurtt, Enger, Kindt). The St. Louis-based creators are not just the co-owners of a new studio space that they have big plans for, but are also collaborating on “The HEK Treasury,” a new, 100 page book of original comics from all three creators, which is currently being funded via Kickstarter.

At time of this writing, in its second day, the Kickstarter is already 100% funded, but stretch goals are to be announced shortly. We can see why this went so quickly; it’s an exciting collection of talent, and the books look and sound gorgeous. We spoke with Hurtt, Enger, and Kindt about the project, self described as McSweeneys meets The Twilight Zone, and what is next for HEK. So, watch the Kickstarter trailer below, read the interview, and then back the book here

.
So many comics stories are shoved into a specific format, based on page count or page sized. When you eliminate those restrictions, how does that change how you approach your work?

Matt Kindt: I think constraints and rules can be good things. It forces you, as a creator, to push to the edges of whatever box you’ve been put in and figure out how to push the rules to breaking as much as possible. I love that part of the process. But at the same time – lifting all constraints for format and size like we’ve done with this? That just increases the size of the box we’re in so I felt like I was still trying to find the outer limits of what comic books can do. We don’t have a set page count. We have a much larger size. How can we push that even further? Things are going to be folding out of this book. We’ve got some add-ons and papercraft items that usually are just that…”add-ons.” But in this case, there are narrative elements to a lot of the “extras” that feed into the stories inside the book. They’re part of the storytelling. And we’re not just limited to art on the pages that you turn. I’m including a section of caption/text stickers with some instructions on how to build on a story that’s in the book…so when you’re done “constructing” it — will change your view of the story you just read. Safe to say, there is a lot in this book that hasn’t been done before with comics — because, for the first time in our careers, we have both the time, space and ability. But also the outlet and the resource of Kickstarter to fund this bonkers book.

Some of Kindt's pages from the 'Treasury'

Marie Enger: What Matt said, haha! Except the sticker part? I’m too afraid to do that! But I’ll be doing some other weird stuff, you know, keepin’ it cool and experimental.

Brian Hurtt: I’ve spent my entire career operating within the 20-something page installment. I know my way around that format so well that it is in danger of becoming habit. This project, for me, is all about breaking out of my long-engrained rhythms and pushing myself in new directions and towards new challenges. I no longer have to think about fitting a story into some prescribed format in order to get it in front of readers. If I have two-page story, there’s a place for it in this book.. A fifteen page story with a fold-out? That has a home here as well. With the “HEK Treasury,” the only limit is my imagination!

It seems like the anthology is a format that creators love, but sometimes has a hard time finding an audience in the weekly comic audience. Why do you think anthologies haven’t caught on in a major way?

BH: One of the reasons we are funding the “HEK Treasury” on Kickstarter is that we really believe in this format and have a chance to connect directly with fans who we think will share our excitement for these stories.

Some of Hurtt's pages from the 'Treasury'

The oversized/prestige/artisanal approach sounds absolutely beautiful, and quite ambitious. Is there one element you each are particularly excited to see, from a production standpoint?

MK: I can’t wait to see the cloth binding and gold-embossed foil version of the book. It’s going to have a kind of medieval/futuristic feel to it that captures the feel of our book — it’s a kind of binding I don’t think any of us has done before. It’s gonna turn this thing into an art object.

BH: There’s talk of doing one or more double-sized foldouts and that has me giddy! I’ve never had the opportunity to do one and I can’t wait to create something that will cover that expansive of a canvas. Then there are a lot of other things we’ve discussed, like gilded pages and cloth bookmarks as well as some other design flourishes that will be dependent on stretch goals. We’re all giving input into design but as Matt is doing the actual design, he will be the final arbiter of how this book looks. Matt’s a great designer and he’s being let off the chain for this one–I can’t wait to see what he comes up with!

ME: I’m really excited to get into the interior covers on that big deluxe edition and do some crazy celtic knotwork that bleeds into mech cables. I’m excited about foil and embossing ALWAYS but man – I’ve never gotten to design the interior of the cover and I’m really looking forward to it!

McSweeneys and the Twilight Zone are two of my favorite bits of media out there. What makes those the touchstones for this book?

MK: Both of those properties are doing, separately, what we’re putting into one project. We’re playing with the form and format like most of McSweeneys books do — letting the content dictate the form and the content is a series of really thought-provoking stories that are going to turn your expectations on their heads…Twilight Zone.

ME: I hate to just keep copying Matt’s answers – but it was better than mine which was “It’s weird but it’s also a neat little collection.” 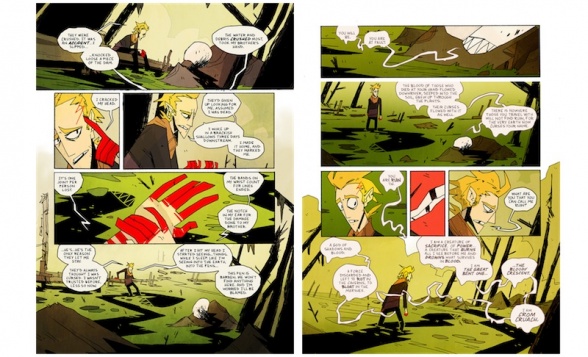 Some of Enger's pages from the 'Treasury'

Finally, if this Kickstarter is successful, do you see this as something that could continue into the future? Or is this a one shot deal?

BH: I can say that we definitely have some other publishing plans should this project be successful. The HEK Treasury really marks the tip of the iceberg as far as what we want to accomplish as a studio!

ME: I want all the folks I love, and I love a LOT OF FOLKS, to see this and see us as someone who in the future, can be an outlet for their work. I want the barriers of traditional publishing GONE. I want to help comics grow and the only way we can do that is by hearing new voices, taking some risks, letting people who may not have been given the chance to tell their story a chance.

MK: This is really us just planting our flag. This book is more than just a collection of sci-fi genre-bending stories. This book is really like an issue of “Fantastic Four” #1. But instead of being the first building block in a superhero universe, we’re building a universe of characters and stories using voices that tend to get lost in the shuffle of traditional media. And it’s establishing us as a studio, and St. Louis as a new hot-bed of creative talent that’s going to push comics as a medium, into new places. We plan on leveraging the success of this book into future projects that will raise awareness, not just for our work, but a lot of creators in the industry that we’re fans of. Creators that might not be able to find an outlet with a traditional publisher or creators that are just tired of doing things the same old way. Let’s break some rules and shake things up. 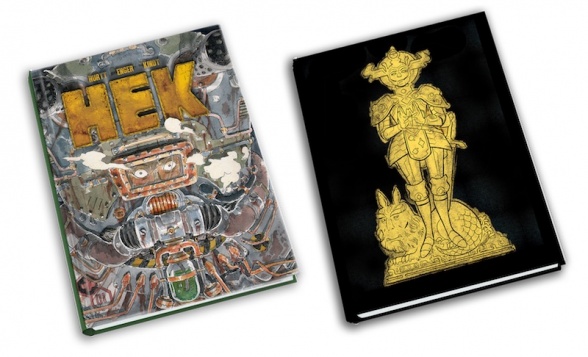