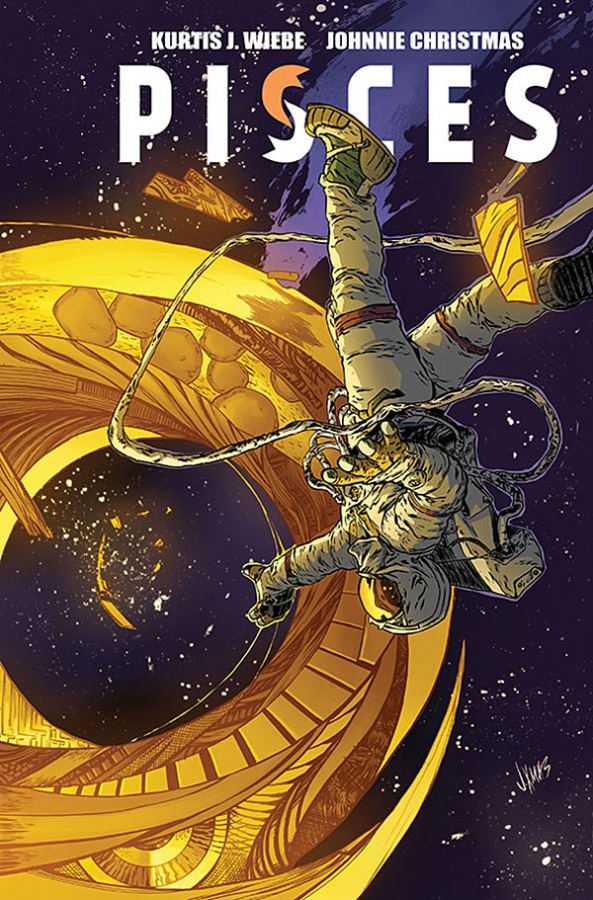 While Kurtis Wiebe’s fantasy/comedy “Rat Queens” is all the rage right now (and rightly so) he first caught my attention with his ill-fated collaboration with Riley Rossmo, “Green Wake”. It was a horror book about a place between places that could be grim at times, but made me an instant fan of Wiebe and Rossmo. Ever since “Green Wake”, I’ve been waiting for Wiebe’s return to horror, and it looks like “Pisces” is finally going to end my waiting.

This time Wiebe is teaming up with Johnnie Christmas, artist of the recently wrapped “Sheltered”, to tell the story of Dillon Carpenter, a fighter pilot during the Vietnam War who must recover from what he saw there, all while dealing with more as he becomes part of a NASA mission for first contact. It’s a story that takes place in the jungles of Vietnam and in the reaches of outer space and some places in between. It’s sci-fi, psychological, body horror.

Read on as we chat with Wiebe about PTSD, using person experiences for horror, the development of “Pisces” since 2013, the uneasy vastness of space, and more. “Pisces” hits shops 4/29, so be sure to pre-order your copy while you still can.

“Pisces” hits shelves in April, and so far we know it’s a story about a fighter pilot turned astronaut in a post-Vietnam time period. What else can you share about the book?

Kurtis Wiebe: Primarily it’s the story about Dillon Carpenter and his life following the traumatic events that change him in the Vietnam War, which is the focus of the first issue. His return to the US, his reintegration with regular society and, eventually, finding himself part of a top secret program within NASA.

During this time, Dillon begins to have bizarre visions, strange glimpses into his future in deep space. It’s a story of personal demons, of trauma and the long term effects of leaving so much of life unresolved.

“Pisces” has been described in a couple places as “psychological body horror”. This marks your return to the horror genre for the first time since “Green Wake”, but this seems like it’ll be a bit different. What’s going to be key to the horror of “Pisces”?

KW: With anything I write, horror specifically, I channel a lot of my personal experiences into the story. Green Wake was written in a delicate time during and shortly after my marriage had fallen apart. It dealt with a lot of themes; grief, loss and guilt.

Pisces comes from a place of looking back on all my experiences of the last few years and seeing that, above everything, I am fully responsible for the choices I’ve made. I can blame circumstance all I want, but at the end of the day, I made a choice. With Dillon, I want to put him through a series of experiences and test his ability to see what led him to his current situation. How does he own that? How does he choose to view his life in light of it? 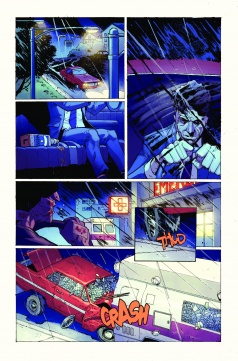 Fear, to me, is always something internal. It’s not the monster that hunts you that is scary, it’s the thought that you can do nothing about your fate. Pisces is a psychological horror in that Dillon’s trauma is horrific, and every day he has to live with the reality of his choices. And that they begin to manifest in the flesh.

The Vietnam War era is, obviously, a rich time period when it comes to very real horrors. How are Dillon’s experiences in the war going to play into the horrors of “Pisces”?

KW: The war is a catalyst for Dillon where he experiences a deeply disturbing, life altering event. There have been so many excellent films that have dealt with the horrors of the Vietnam War, about the war without a frontline, and I wanted to take that and follow a man who experienced them first hand and how it affected his life after.
It’s also a very vulnerable time in American history. Civil Rights, the hippie movement, political scandal. With a lot of the research I’ve done for it, I’ve been continually surprised at how similar the climate was then as it is in the US now. It makes Pisces as relevant now, despite being set over thirty years ago.

Dillon is going to be dealing with PTSD in a time when PTSD wasn’t even really a recognized disorder. How much research did you do into it? How does his PTSD affect his life in “Pisces”?

KW: I’m carrying over a lot of my reading that I did for Peter Panzerfaust to Pisces. It’s weird that I ended up researching war veteran PTSD for Panzerfaust because our original intent for the series was a sort of Indiana Jones style adventure story. As I wrote it, though, I started to realize that in a war story with kids, there’s going to be some serious trauma for those that lived in that time.

It hit me around issue 2 and from there I started reading a lot of personal accounts of the war. A recurring theme is survivor syndrome and the inability to fit back into a civilian life upon returning home.

And PTSD was the sort of thing, until shortly after Vietnam, was basically hand waved away. It was just ‘shell shock’ and one simply needed to man up to get over it. So, we’ll be studying that as well in Pisces, that there really was no support for those who came back with a soul full of trauma. 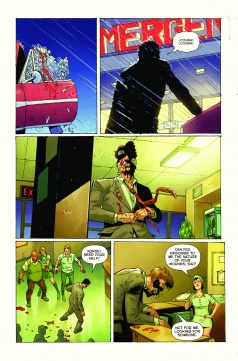 You’ve said previously that you and artist Johnnie Christmas have been working on the concept of “Pisces” since 2013. How has the concept changed and been refined in that time?

KW: The best payoff for such a long development period is that we have trimmed away all the unnecessary pieces to make Pisces a very focused character piece. We have studied each character in the series, asked all the important questions for them, so we both know exactly how they would react in any given situation.
There have been a few changes, of course. We knew the timeline of the story but we’d picked a few different starting points throughout the past two years. At one time we were going to start the series with him returned home, already training with NASA. Another time was pre-Vietnam. Because we have built such an elaborate mythology in Pisces, one of the most difficult parts of it was picking a beginning point.

“Pisces” is definitely a much different tone than your other current book “Rat Queens”. While switching between between genres is something every writer should be able to do, how do you keep the creative process flowing switching between something that’s often a little more light like “Rat Queens” and something like “Pisces”, which is going to be a bit more serious? How do you get in the headspace for each?

KW: Music is key. With Rat Queens it’s a bit easier because I have a library of issues in the series to draw from, while Pisces is still very new. I knew that tone was going to be the most important part to maintain in Pisces so I wrote a very detailed outline of the series, which helps me stay focused.

Going back and forth between the two is just a matter of setting the proper mood before hand. If I’m writing Rat Queens, I’ll throw on some Warpaint or Nico Vega and read through past issues. If it’s Pisces, I pop on Nick Cave and Warren Ellis soundtracks and let my mind wander. 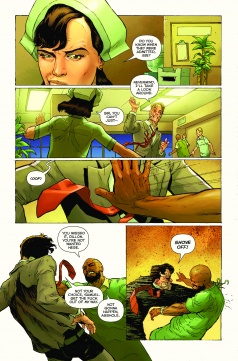 Beyond the horror and psychological issues, “Pisces” is going to deal with space. What is it about space and the broader sci-fi genre that drew you to it?

KW: It’s one of the last great unknowns to us. When I think about how vast the universe is, it actually makes me uneasy. Because we’re dealing with the idea of psychological isolation, the only place I can imagine being the very definition of isolated physically is space.

You could travel forever and would never find another living soul.